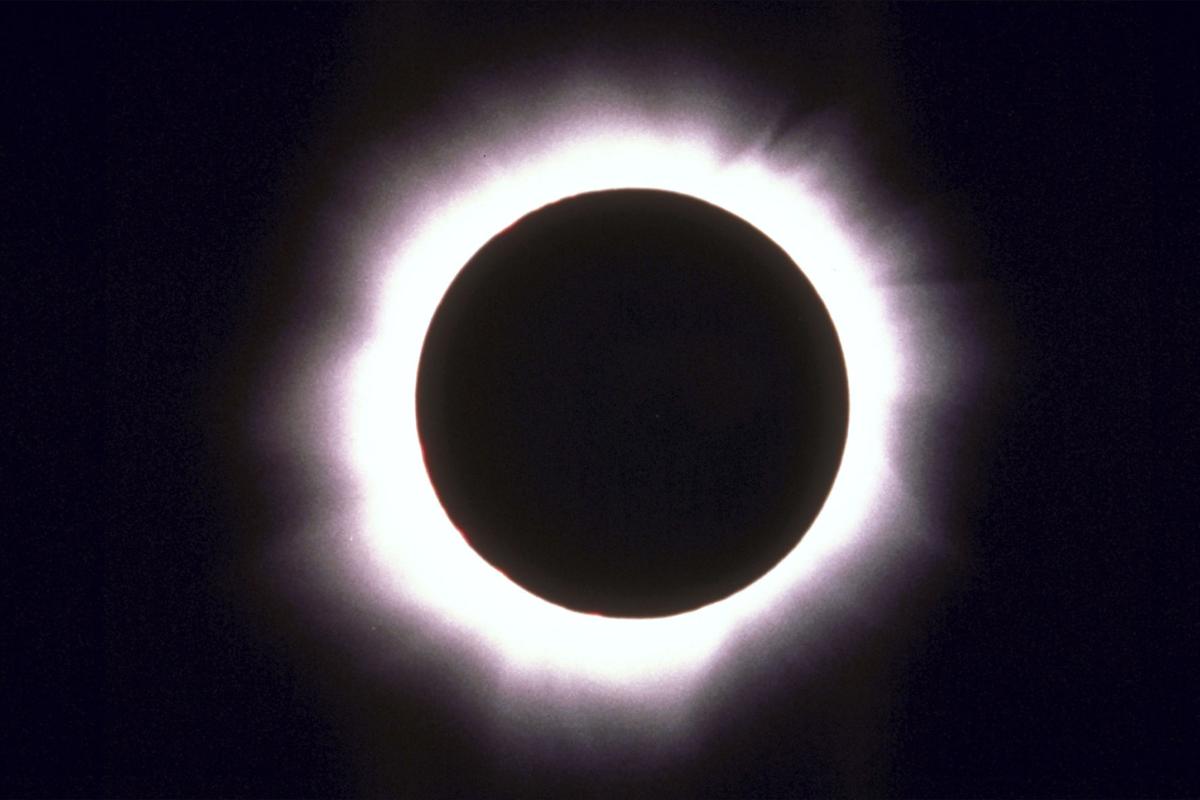 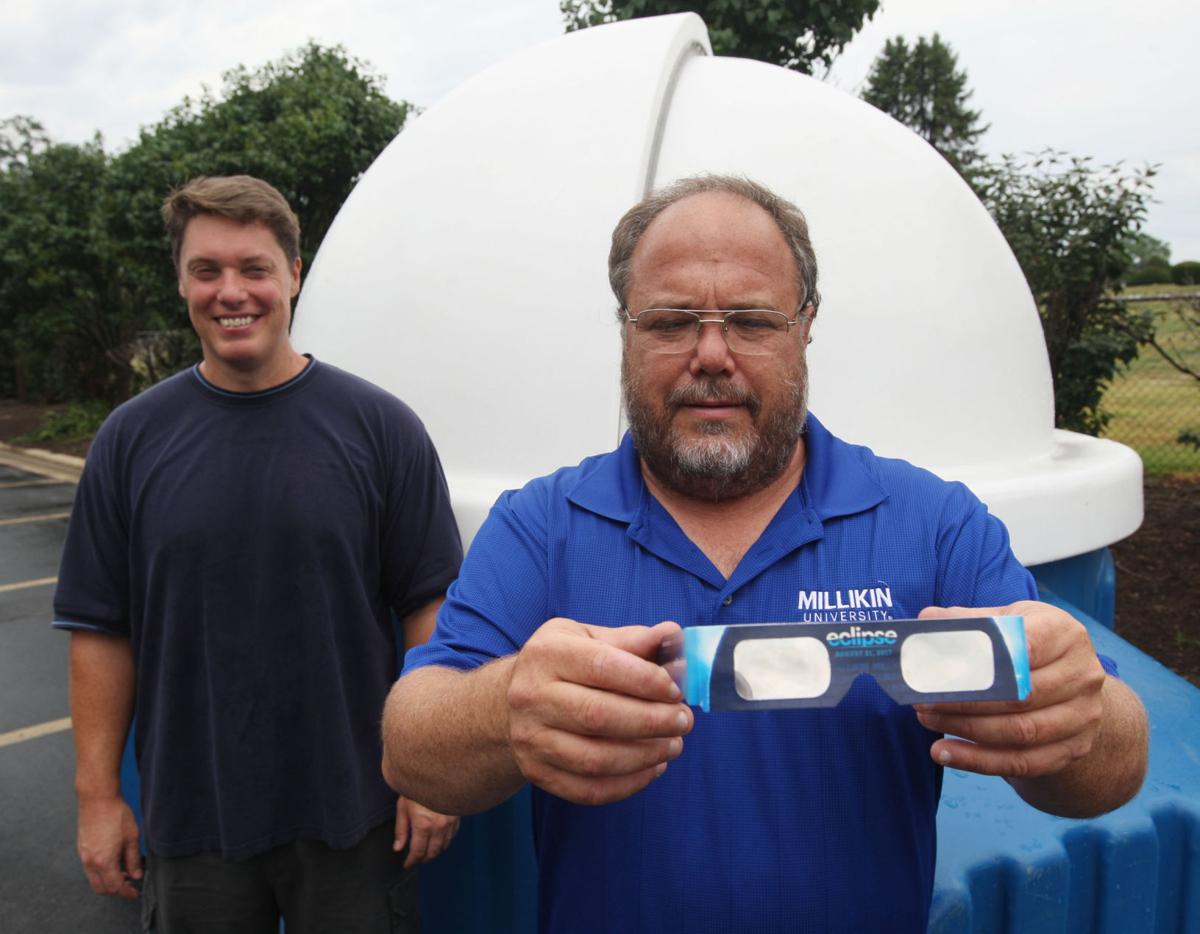 Millikin University mathematics professor Dan Miller shows eclipse glasses being distributed to local schools as physics and astronomy professor Casey Watson looks on. The Aug. 21 eclipse will be visible from the Decatur region. 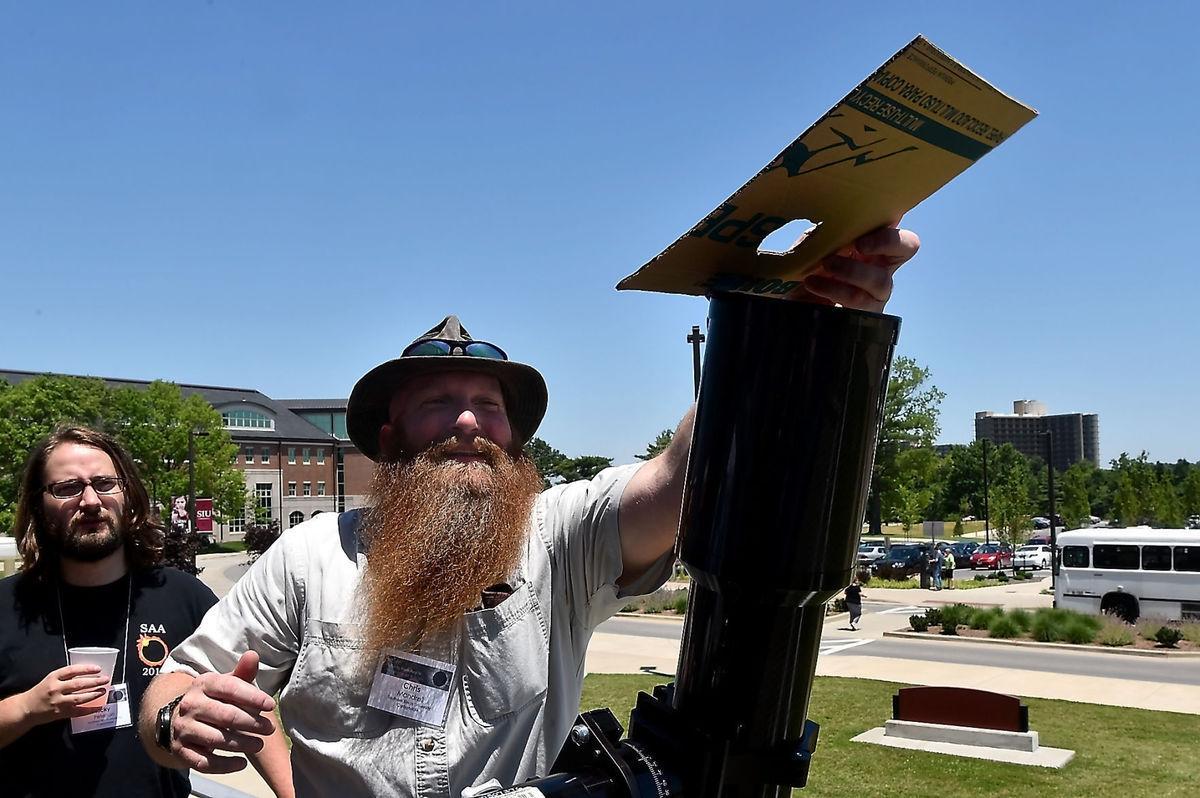 Chris Mandrell, of Southern Illinois University, demonstrates a device to view the solar eclipse that will be visible from Carbondale next month. Decatur is north of the total eclipse zone.

The Decatur region has a front-row seat to the greatest show above earth.

A cross-country total solar eclipse will eerily dim the skies as the sun vanishes behind the moon on Aug. 21 — a rare cosmic marvel that won’t be seen here for another seven years.

The darkest part of the lunar shadow barreling diagonally across the U.S. will fall about 130 miles south of Decatur, a length practically across the street in outer space terms.

Places like Carbondale, which is directly in the path, are preparing for throngs of people for the phenomenon, the first of its kind to cross coast to coast in 99 years. Further north, the celestial feat will still be dramatic to see, said Casey Watson, a physics and astronomy professor at Millikin University. Watson compared it to the Super Bowl for the sheer magnitude of interest being generated.

“Just because it is in our backyard doesn't mean others aren't just as excited,” Watson said.

The school is organizing events at its Requarth Observatory, which lays claim to the biggest university-owned telescope in the state, and is distributing special glasses to children for viewing the fleeting spectacle.

When the moon passes between the sun and the Earth, the eclipse is poised to be visible in Decatur starting at 11:52 a.m. Peak blockage is at 1:19 p.m., when about 95 percent of the sun will be hidden. The event will be over by 2:44 p.m.

All of the sun will be blocked for those in a 70-mile-wide band from Oregon to South Carolina, called the “path of totality.” In Illinois, the northern edge of the path passes from about East St. Louis southeast to near Mount Vernon and onto the Kentucky border.

The nearer to the center of the shadow, called the umbra, the longer the darkness. For example, in Carbondale’s Giant City State Park, the total eclipse is expected to hit 2 minutes, 40 seconds. For them, only the sun’s faint outer atmosphere, the corona, will be visible.

Large cities in the zone include Kansas City, Nashville and Charleston, South Carolina, although almost the entire country will see at least some of the sun blocked – as long as the weather cooperates. As of Friday, the National Weather Service didn’t have projections for forecasts that far out.

Either way, for anyone watching, telescopes, special glasses and other devices are suggested for viewing the event, since looking at even a sliver of the sun can damage eyes.

Aside from the lack of light, the lowering of temperatures and the disruption of wildlife are common during the dark time.

“We will be able to see the planets and stars clearer,” said Daniel Miller, a Millikin professor of mathematics.

Overall, the lunar shadow next month will race across 2,500 miles of the U.S. in about 94 minutes.

The fast-moving nature is one of the many reasons all sorts of myths and legends have been linked to eclipses in many cultures, from a dragon eating the sun by the early Chinese to ancient Greeks believing it was when gods were angry with humans.

Instead, solar eclipses are simply a product of a planetary quirk. Although the moon and sun align every 29 days, the moon’s tilted orbit around the earth means it rarely blocks the sun. Only occasionally do all the pieces line up.

For example, the August event will be the first total one visible in the contiguous United States since February 1979 and the first coast to coast since June 1918.

The once-in-a-lifetime status means interest has been building for months. The U.S. Postal Service in June unveiled a 49-cent stamp that uses temperature-sensitive ink that turns the sun into the moon.

As eclipse excitement grows, so do cautions about eye safety

On Aug. 21, millions of people across the United States will have the opportunity to view a total solar eclipse, an astronomical event that has not happened in St. Louis since 1442.

But Carbondale may get the award for the biggest astronomical coincidence — it’s also smack in the path of the next total eclipse, on April 8, 2024. That route passes from southwest to northeast, once again right over the city.

The curious fluke — Carbondale is being called the "Eclipse Crossroads of America" now  — has meant lots of attention has been directed on Jackson County. Hotels are booked. Stores are being stocked. Amtrak is offering discounted tickets on its Illini and Saluki trains from Chicago to accommodate the crowds.

Southern Illinois University alone is preparing for 50,000 visitors next month, or about twice the city’s population. The school has partnered with NASA, the Adler Planetarium in Chicago and the Louisiana Space Consortium on a research workshop, art and craft fair, comic con and technology expo, along with a viewing event in 15,000-seat Saluki Stadium.

They’re renting out suites in Schneider Hall at $800 for three nights, charging $36 for parking on campus and have made commemorative SIU eclipse glasses. The city also is planning a music festival dubbed Shadow Fest.

“There are going to be so many things going on at SIU and from Mount Vernon to Cairo, really from Oregon to South Carolina,” Chris Walls, executive director of The Science Center in Carbondale.

Technically, the point of longest duration will be on the grounds of Blue Sky Winery, near Makanda. But Patti Thompson, a spokeswoman for the Illinois Emergency Management Agency, said they’re actually concentrating on 18 counties south of Interstate 70 that could be impacted by crowds. She said state officials have been in planning mode for months about how to handle the intense interest. That includes coordinating public safety concerns for motorists to making sure there are adequate medical facilities in case of high temperatures.

“We do know,” she said, “there is going to be an influx of people into that part of the state.”

For scientists and educators, the eclipse also is a chance to learn about the sun and its effects on Earth. NASA has funded 11 studies tied to the event, including one at SIU.

Locally, fifth and sixth grade students from French Academy in Decatur also will be traveling to the SIU stadium to view the eclipse.

Younger students are invited to the watch from Millikin. Ten smaller telescopes also will be posted for the public. The white-domed Requarth  Observatory, named after late Decatur surgeon William H. Requarth, can be seen on the rooftop of the Leighty-Tabor Science Center on Fairview Avenue.

To maximize the solar learning experience for other students, Millikin's School of Education also collaborated with French Academy in developing an education plan. The college has provided funding for solar eclipse glasses and a student field trip to SIU for the day of the eclipse.

“We have aimed to support French in their exploration and development of STEM initiatives,” said Christie Magoulias, Millikin's director of education. “The upcoming solar eclipse is a perfect opportunity for that.”

This year, the Decatur School District also picked the eclipse theme for its summer camp.

Watson, Miller and a few Millikin professors and students are traveling to Glendo State Park in southeast Wyoming a few days before to view the eclipse.

Miller said the group selected two areas of the park ideal for their purposes. Experiments will be conducted on the west side of the mountain with the highest probability of a clear view.

“I wanted to be able to see the eclipse in the clearest sky,” Miller said. “It is also the driest side of the mountain.”

Watson said the group hopes to simulcast the eclipse back to Millikin's campus.

“We bring astronomy education to the public,” he said. “And being a state park, we can camp out, which is less expensive.”

Back in Illinois, Ed Cross, of the Illinois Department of Natural Resources, said they’ve identified 13 parks and recreational areas in Illinois best for viewing the eclipse. He said they’re ready for the big watch day – and lots of visitors from afar.

“We are working with local law enforcement, because it is such a large event,” he said. “It's not just people from Illinois. We are expecting people from other states, too.”

An earlier version of this story incorrectly described what happens during an eclipse and what will be seen in Decatur, as well as the purpose of Millikin professors going to Wyoming. This version has been corrected.

Kurt Erickson and Marilyn Halstead of the Herald & Review News Service and the Associated Press contributed to this report.

The eclipse is coming!

The total eclipse is coming on Monday, Aug. 21. Here’s what to know:

A solar eclipse is when the moon casts a shadow on Earth, blocking the sun’s light in some areas. The last one was 38 years ago. The next is in 2024.

When will it happen?

Where can I see it?

A wide section of the U.S., from Oregon to South Carolina, are in the 70-mile wide path, which includes Carbondale directly in the zone. From Decatur, the view will be of a partial eclipse – meaning a fraction of the sun will be visible.

Locally, daylight will turn into a twilight-like hue. It’s important to avoid looking into the sun during the eclipse, which can cause eye damage. Visit herald-review.com to learn how to create eclipse projectors.

Your guide to the Aug. 21 total solar eclipse

If you haven’t already, you might want to mark your calendars for Aug 21, and make a special notation for oh, say, early afternoon, depending …

DECATUR — At first glance, combining a chemistry degree with a minor in business would seem to be a slightly odd mix, but it's not really.

Decatur Science Investigation always engaged kids and made science fun, but the van and shows are retiring after a 12-year run.

DECATUR — Honeybees are smarter than people may realize.

DECATUR — The Decatur School District's Camp Connections has been all about the sun this year, in anticipation of the eclipse in August.

The solar eclipse won't happen until Aug. 21, but participants will learn about it during this year's Decatur School District summer camp prog…

DECATUR — If it wasn't for Amazon's recall of solar eclipse eyewear, the Decatur Public Library would likely have passed out all of their spec…

From special cocktails at the Beach House to a communal viewing party at Millikin University, Decatur relished the chance to take in Monday's solar eclipse. 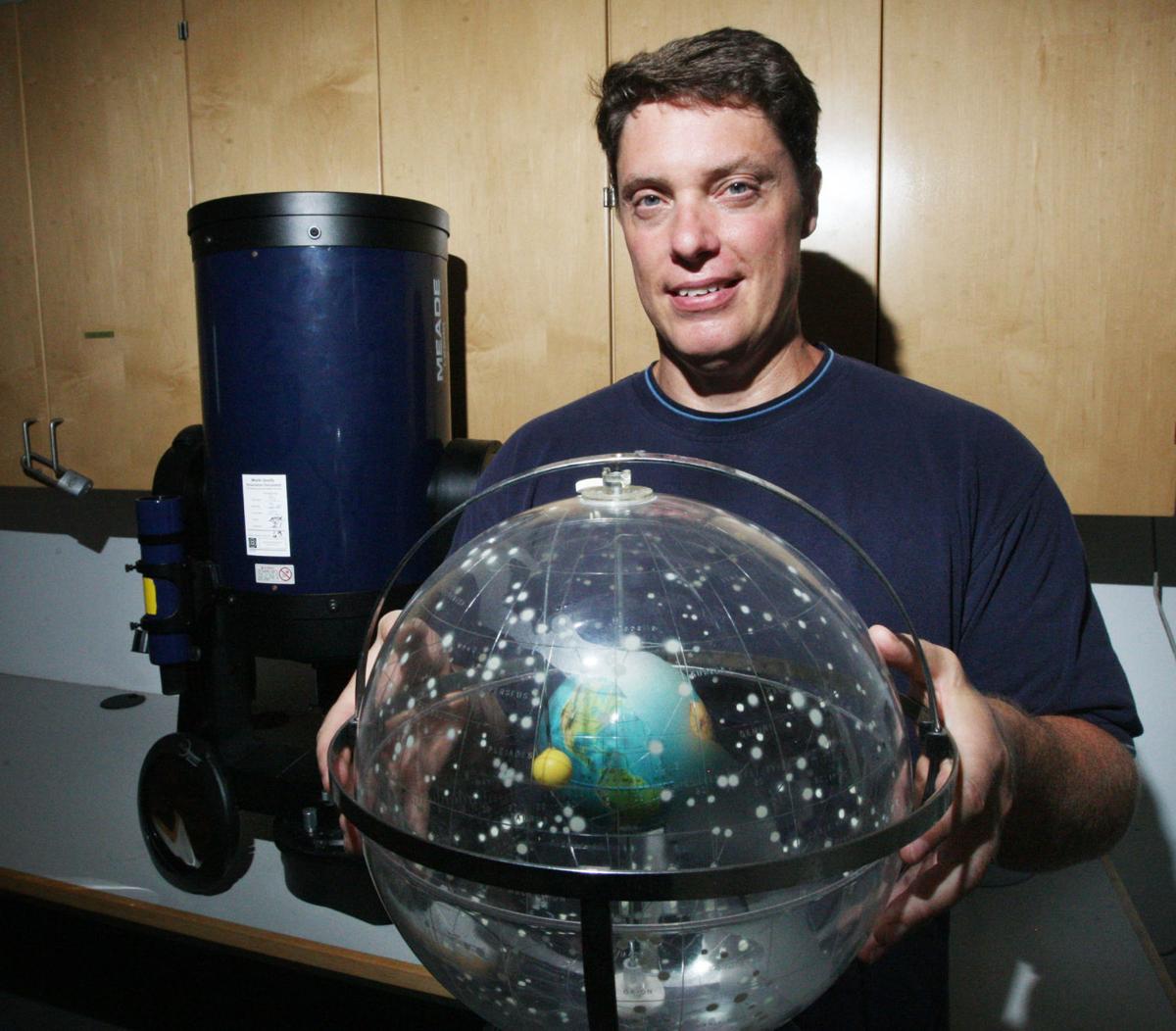 Millikin physics and astronomy professor Casey Watson is pictured with a model used for teaching about eclipses. A full solar eclipse will travel across the entire length of the United States for the first time in nearly a century on Aug. 21.

Millikin University mathematics professor Dan Miller shows eclipse glasses being distributed to local schools as physics and astronomy professor Casey Watson looks on. The Aug. 21 eclipse will be visible from the Decatur region. 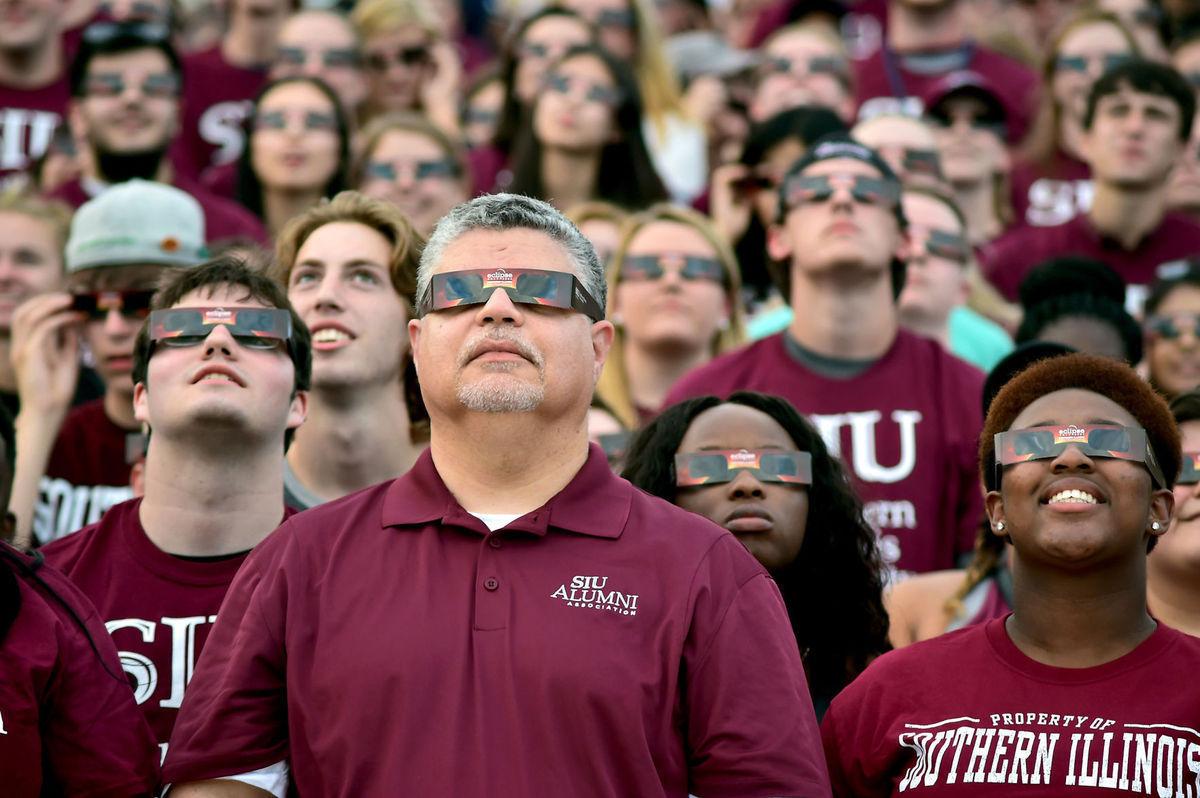 Eclipse sunglasses are tested at Southern Illinois University in Carbondale, which is directly in the shadow zone of the Aug. 21 solar eclipse. A partial solar eclipse will be visible from Decatur.

Chris Mandrell, of Southern Illinois University, demonstrates a device to view the solar eclipse that will be visible from Carbondale next month. Decatur is north of the total eclipse zone.