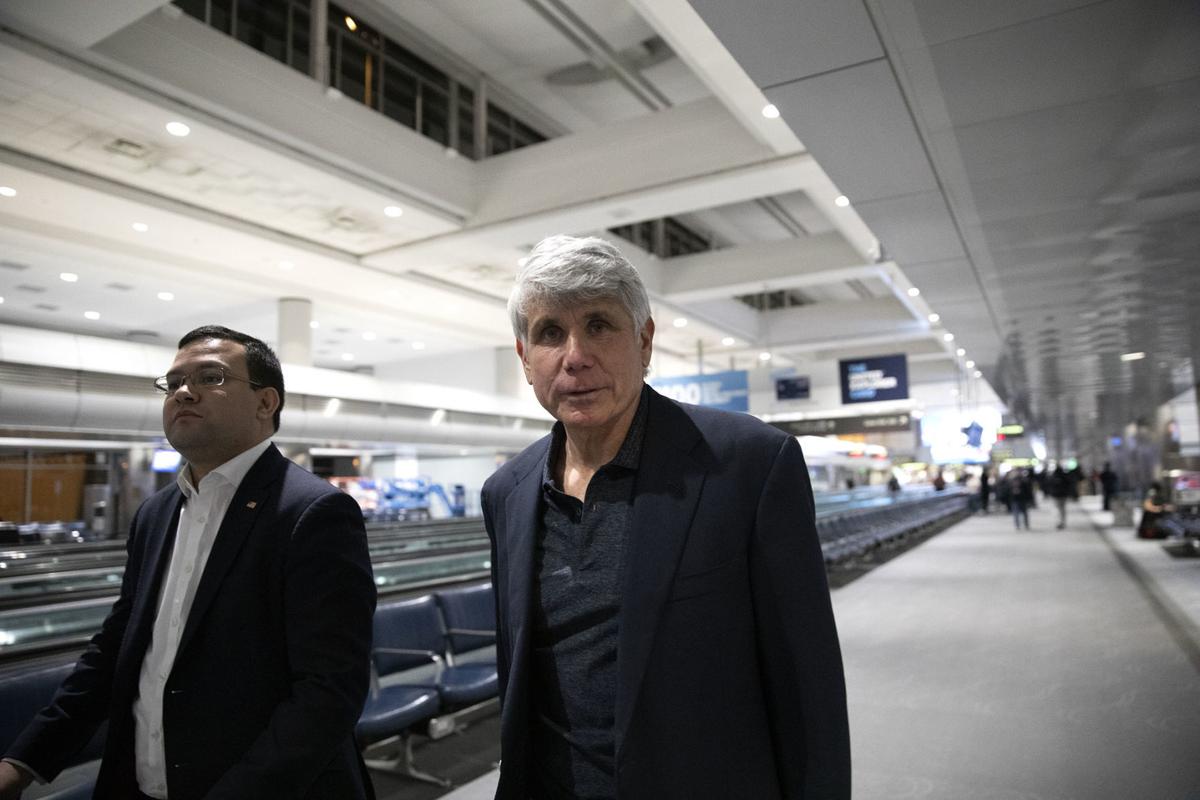 Former Gov. Rod Blagojevich arrives to Denver International Airport on Tuesday. President Donald Trump cut short the sentence of Blagojevich, who has served eight years of a 14-year prison term for trying to sell the open U.S. Senate seat that Barack Obama had held before he entered the White House. 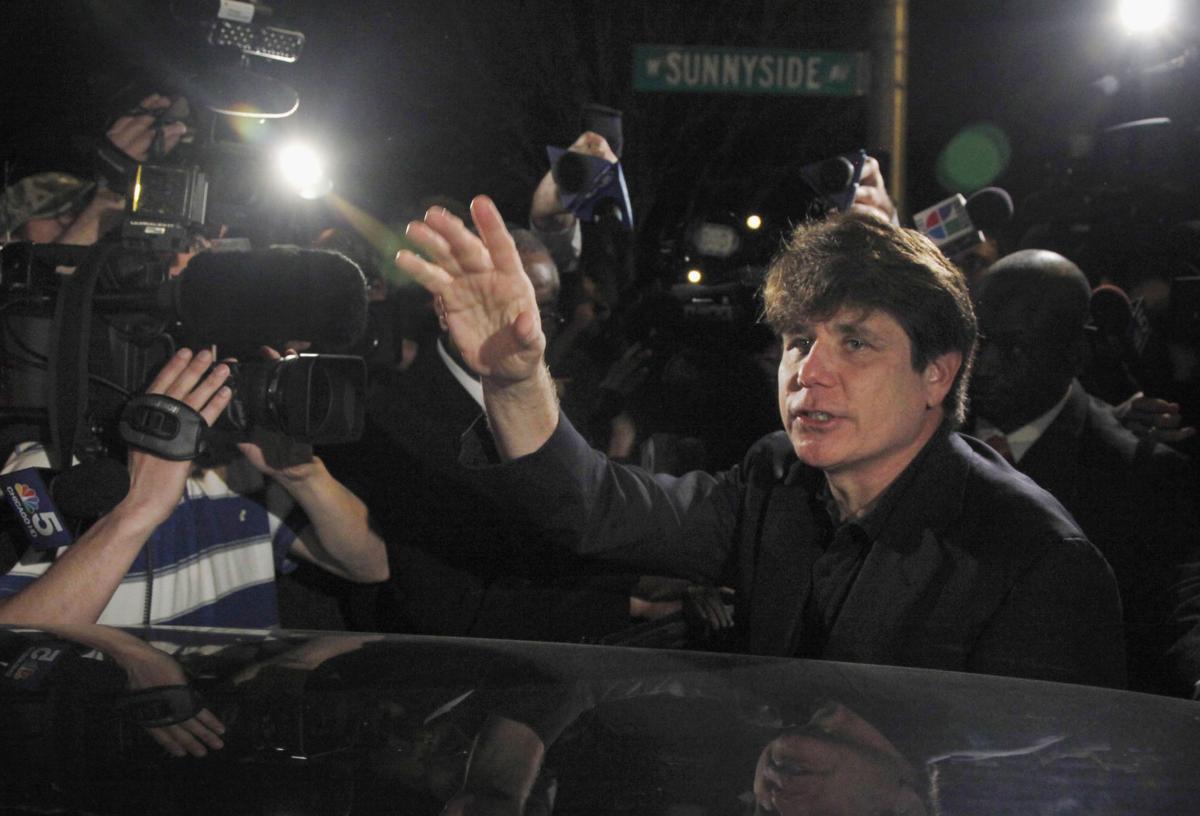 President Trump goes on clemency spree, and the list is long

The Republican president said the punishment imposed on the Chicago Democrat and one-time contestant on Trump's reality TV show "Celebrity Apprentice" was excessive.

“So he'll be able to go back home with his family,” Trump told reporters in Washington. “That was a tremendously powerful, ridiculous sentence in my opinion and in the opinion of many others.”

The Chicago Tribune on Tuesday night posted a photo of the gray-haired Blagojevich at Denver International Airport.

Promising he will have more to say in a Wednesday news conference, Blagojevich told WGN-TV he appreciated the president's action.

“I’m profoundly grateful to President Trump and it’s a profound and everlasting gratitude,” Blagojevich said. “He didn’t have to do this, he’s a Republican president and I was a Democratic governor. I’ll have a lot more to say tomorrow.”

Blagojevich wouldn’t say what plans he had for the future, however he did talk a bit about his time in prison.

``I’ve learned a lot about the criminal justice system, how unfair it can be, how unjust it is to people of color,” he said. “I’ve drawn closer to God. There is divine intervention in all of this.”

Blagojevich, who hails from a state with a long history of pay-to-play schemes, is expected to walk out of prison later Tuesday, according to a person close to him, who spoke on condition of anonymity because they had not seen any signed paperwork. He had been found guilty of crimes that included seeking to sell an appointment to Barack Obama's old Senate seat and trying to shake down a children's hospital.

The 63-year-old Democrat exhausted his last appellate option in 2018 and had seemed destined to remain behind bars until his projected 2024 release date. His wife, Patti, went on a media blitz in 2018 to encourage Trump to step in, praising the president and likening the investigation of her husband to special prosecutor Robert Mueller's investigation into Russian meddling in the 2016 election — a probe Trump long characterized as a “witchhunt.”

“Rod Blagojevich, the former Governor of Illinois, was sentenced to 14 years in prison. He has served 7 years,” Trump had tweeted in August of 2019. "Many people have asked that I study the possibility of commuting his sentence in that it was a very severe one. White House staff is continuing the review of this matter.”

"I've made a whole bunch of mistakes, but I didn’t break any laws," Blagojevich told reporters at Denver International Airport. https://t.co/JA4nWHQFJv pic.twitter.com/UG7iQdF6V9

Blagojevich’s conviction was notable, even in a state where four of the last 10 governors have gone to prison for corruption. Judge James Zagel — who in 2011 sentenced Blagojevich to the longest prison term yet for an Illinois politician — said when a governor “goes bad, the fabric of Illinois is torn and disfigured."

Blagojevich became the brunt of jokes for foul-mouthed rants on wiretaps released after his Dec. 9, 2008, arrest while still governor. On the most notorious recording, he gushes about profiting by naming someone to the seat Obama vacated to become president: "I've got this thing and it's f------ golden. And I'm just not giving it up for f------ nothing."

Prosecutors have balked at the notion long fostered by Blagojevich that he engaged in common political horse-trading and was a victim of an overzealous U.S. attorney, Patrick Fitzgerald. Fitzgerald said after Blagojevich's arrest that the governor had gone on "a political corruption crime spree" that would make Abraham Lincoln turn over in his grave.

Mueller — a subject of Trump's derision — was FBI director during the investigation into Blagojevich. Fitzgerald is now a private attorney for another former FBI director, James Comey, whom Trump dismissed from the agency in May 2017.

Trump also expressed some sympathy for Blagojevich when he appeared on "Celebrity Apprentice" in 2010 before his first corruption trial started. As Trump "fired" Blagojevich as a contestant, he praised him for how he was fighting his criminal case, telling him: "You have a hell of a lot of guts."

He later poll-tested the matter, asking for a show of hands of those who supported clemency at an October, 2019 fundraiser at his Chicago hotel. Most of the 200 to 300 attendees raised their hands, The Wall Street Journal reported, citing several people at the event.

On the same day, Trump told Chicago's WLS-TV that — despite bringing up the possibility of freeing Blagojevich in August and then appearing to back away from the idea — Blagojevich shouldn't abandon hope of an early release.

Blagojevich testified at his 2011 retrial, describing himself as a flawed dreamer grounded in his parents' working-class values. He sought to humanize himself to counteract the blunt, profane, seemingly greedy Blagojevich heard on wiretap recordings played in court by prosecutors over several weeks. He said the hours of FBI recordings were the ramblings of a politician who liked to think out loud.

But jurors accepted evidence that Blagojevich demanded a $50,000 donation from the head of a children's hospital in return for increased state support, and extorted $100,000 in donations from two horse racing tracks and a racing executive in exchange for quick approval of legislation the tracks wanted.

He originally convicted on 18 counts, including lying to the FBI, wire fraud for trying to trade an appointment to the Obama seat for contributions, and for the attempted extortion of a children's hospital executive. The 7th U.S. Circuit Court of Appeals in Chicago in 2015 tossed five of 18 convictions, including ones in which he offered to appoint someone to a high-paying job in the Senate.

The appeals court ordered the trial judge to resentence Blagojevich, but suggested it would be appropriate to hand him the same sentence, given the gravity of the crimes. Blagojevich appeared via live video from prison during the 2016 resentencing and asked for leniency. The judge gave him the same 14-year term, saying it was below federal guidelines when he imposed it the first time.

Famously fastidious about his dark hair as governor, it turned white behind bars because hair dyes are banned in prison.

Blagojevich had once aspired to run for president himself but entered the Federal Correctional Institution Englewood in suburban Denver in 2012, disgraced and broke. Court documents filed by his lawyers in 2016 portrayed Blagojevich — known as brash in his days as governor — as humble and self-effacing, as well as an insightful life coach and lecturer on everything from the Civil War to Richard Nixon. Blagojevich, an Elvis Presley fan, also formed a prison band called "The Jailhouse Rockers."

Multiple news outlets are reporting that President Donald Trump is expected to commute the sentence of former Democratic Gov. Rod Blagojevich, who is more than halfway through a 14-year prison sentence on federal corruption charges.

The New York Times and ABC News are reporting that Trump is expected to move ahead with commuting the sentence, meaning the former governor would be released early.

Trump previously said he thought Blagojevich's sentence was too harsh. Blagojevich, 63, began serving his sentence in the Federal Correctional Institution in Englewood, Colorado, in March 2012. He was charged with attempting to profit or obtain a favorable position in exchange for selling the U.S. Senate seat of then-President-elect Barack Obama.

Blagojevich also was convicted of attempting to extort a children's hospital executive and the horse racing industry for campaign contributions in exchange for official action in office.

Illinois lawmakers impeached Blagojevich and removed him from office in 2009.

Trump raised the possibility of commuting Blagojevich's sentence in August.

At the time, he tweeted: "Rod Blagojevich, the former Governor of Illinois, was sentenced to 14 years in prison. He has served 7 years. Many people have asked that I study the possibility of commuting his sentence in that it was a very severe one. White House staff is continuing the review of this matter."​

Blagojevich competed on "The Celebrity Apprentice" in 2010 while awaiting trial. Trump hosted the reality television series from 2008 to 2015.

The former governor's final appeal to the U.S. Supreme Court failed in April 2018.

New: Illinois House Republican Leader Jim Durkin says jailed ex-gov Blagojevich was "rogue on steroids" when he "abused the office." Adds, "I guess @realDonaldTrump's not concerned about the state of Illinois next November." pic.twitter.com/vMJ95ve3HO

His wife, Patti Blagojevich, has campaigned heavily for his release, including appearances on Fox News.

This is a developing story that will be updated.

We’re headed home! Profoundly grateful to President @realDonaldTrump. See you at the press conference tomorrow at 11:00 am (CST). pic.twitter.com/WejANRvSyu

Disgraced former Illinois Gov. Rod Blagojevich rang in the new year by penning an editorial for a conservative website arguing that current House Democrats who have impeached President Donald Trump also would have tried to impeach Abraham Lincoln.

CHICAGO — Convicted former Gov. Rod Blagojevich, who has never really been considered a giant in the legal profession, used to joke that he'd …

"He'll be able to go back home with his family after serving eight years in jail, that was a tremendously powerful, ridiculous sentence in my opinion," Trump said in Maryland on Tuesday.

For most of her time as Illinois first lady, Patti Blagojevich preferred a behind-the-scenes role, advising her husband on myriad topics while…

Amid the clatter over the news Rod Blagojevich would be released from prison years early, the former feds who first put him behind bars were q…

Religious exemption for vaccines would be dropped for kids in Illinois schools under proposed law. 2nd bill would require HPV shots.

Under newly introduced state legislation, parents in Illinois would no longer be able to claim religion as a reason to refuse vaccinations for their children -- a move backed by public health officials as a way to stave off outbreaks of diseases once thought to be eradicated, and shunned by groups vocal about their objections to vaccines.

Members of the 32-lawmaker Illinois Legislative Black Caucus said Gov. JB Pritzker’s budget proposal for the fiscal year starting in July is a good start but needs more money and support for people of color.

2-year lobbying effort pays off in freedom for Blagojevich

Patti Blagojevich's campaign for her husband's release began soon after he lost a string of legal appeals that seemed to doom him to remain behind bars until his projected 2024 release date.

Former Gov. Rod Blagojevich arrives to Denver International Airport on Tuesday. President Donald Trump cut short the sentence of Blagojevich, who has served eight years of a 14-year prison term for trying to sell the open U.S. Senate seat that Barack Obama had held before he entered the White House. 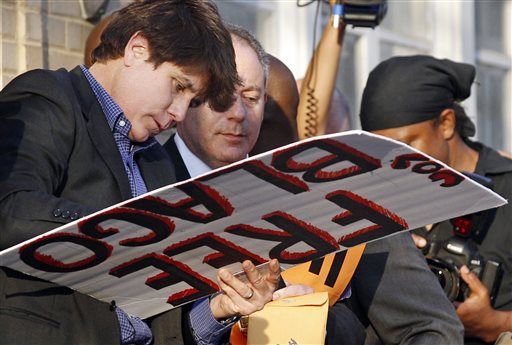 This March 14, 2012 file photo shows former Illinois Gov. Rod Blagojevich autographing a 'Free Gov. Blago' sign for one of his supporters at his home in Chicago the day before Blagojevich was due to report to prison to begin serving a 14-year sentence on corruption charges. 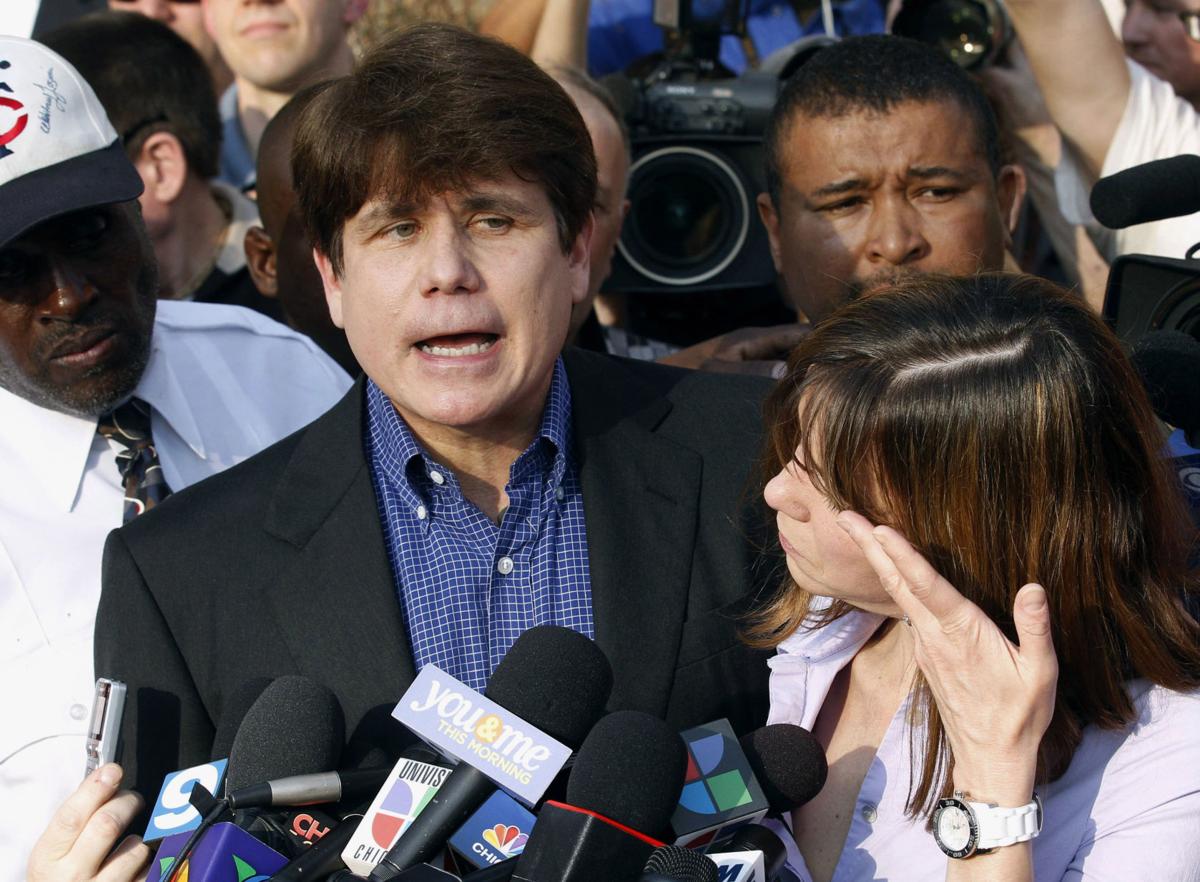 In this March 14, 2012, former Illinois Gov. Rod Blagojevich speaks to the media outside his home in Chicago as his wife, Patti, wipes away tears a day before he was to report to a prison after his conviction on corruption charges. 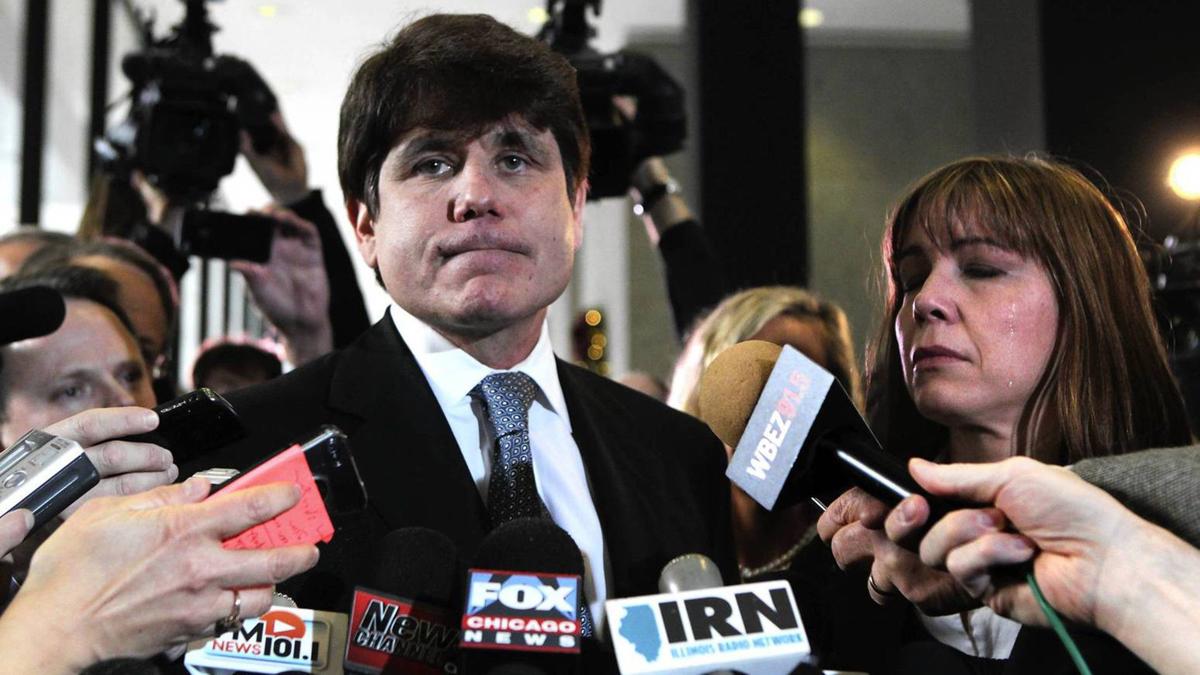