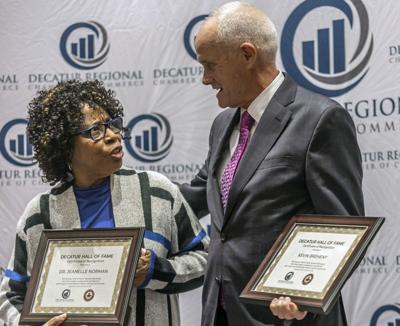 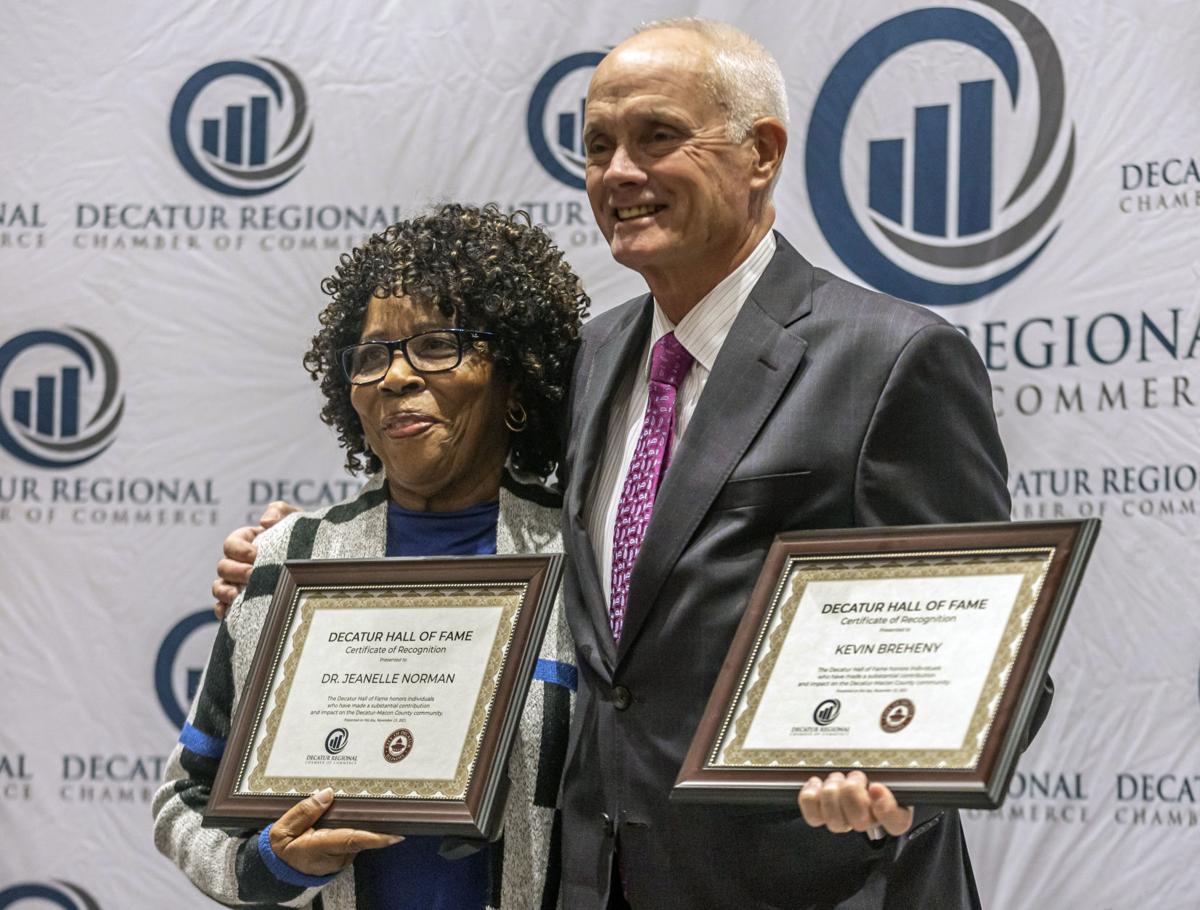 Community members gathered Tuesday to honor and give thanks to Jeanelle Norman Kevin Breheny, the latest inductees to the Decatur Hall of Fame. 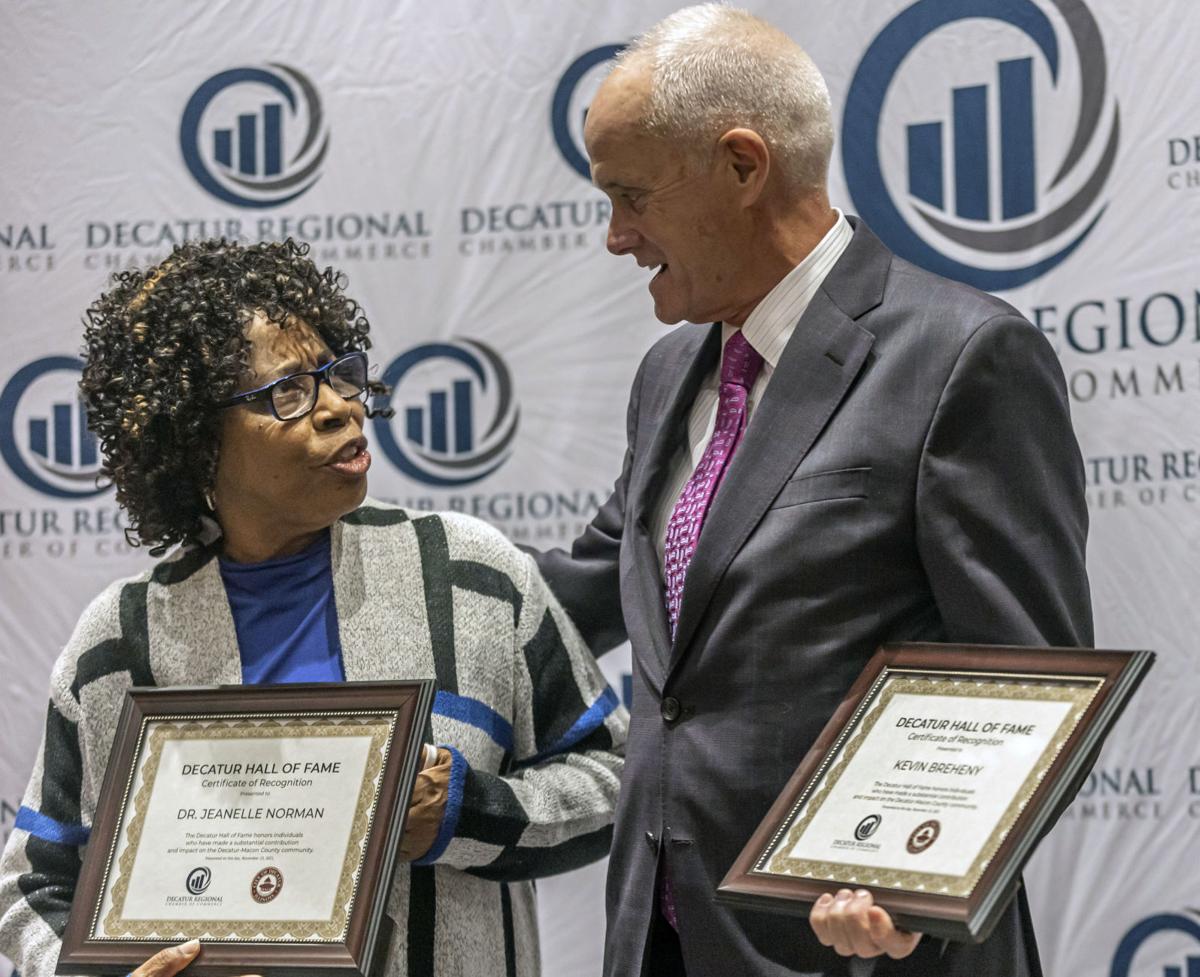 Community members gathered Tuesday to give thanks to the two inductees, president of the Decatur chapter of the NAACP Jeanelle Norman and former president of J.L. Hubbard Insurance and Bonds Kevin Breheny.

DECATUR — In a pleasant turn of events, two local leaders were surprised to be inducted into the Decatur Hall of Fame as each thought they would be honoring the other for their milestone achievement.

Community members gathered Tuesday to give thanks to the two inductees, Jeanelle Norman and Kevin Breheny.

As tradition, officials from the Decatur Regional Chamber of Commerce and the city of Decatur revealed the selection prior to the annual Thanksgiving Luncheon. Chamber president Miranda Rothrock said they added two inductees this year because there wasn’t anyone inducted last year due to the pandemic.

“I can’t think of two better individuals that belong into the Decatur Hall of Fame and have their plaque reside here at the Decatur Civic Center,” Rothrock said. “It is such a prominent place to look at our leaders, both in the past and in the present, and in the accomplishments that they have done. They’ve truly helped make Decatur and Macon County what it is today.”

Norman, who is usually associated with her role as president of the Decatur chapter of the NAACP, helped start the Area Leaders and Education Response Team with former Decatur Police Chief Jim Getz and brought attention to the high dropout rates among African American males by working with the Chamber to form the Joint Dropout Task Force.

Norman said she came to show support for Breheny’s induction and was not expecting to be inducted herself.

Torria Norman, Jeanelle’s daughter, said it was tough to keep the surprise a secret but she is proud to see her mother be acknowledged for her contributions to Decatur and be known as a community leader.

“Watching her be an activist and help the community, she’s brought me along with her to do that so I’ve been a part of it with her,” Torria said. “I’ve watched her give blood, sweat and tears to this community and it’s been a journey, so this is the ultimate high for her to have this honor.”

With over 50 years of volunteering since she’s joined the Decatur NAACP in 1970, Norman said she’s humbled to have the community show appreciation for her and she’s ready to continue to work for what is right for the African American community.

Breheny, the former president of J.L. Hubbard Insurance and Bonds, has lived in Decatur for 43 years and has had a hand in organizing local efforts like co-founding the WSOY Community Food Drive and working on the Decatur Celebration.

He came to Tuesday's event with the intention of giving a speech for Norman’s induction and the thought of him being inducted never crossed his mind.

“I spent the weekend writing my thoughts down about Dr. Norman because it was such an honor to get to do that for her,” Breheny said. “We’ve worked on so many projects and when it works out we just moved on to the next. We haven’t even seen each other in two years because of COVID so I was stunned.”

Decatur board to interview superintendent candidates

Joel Fletcher, a philanthropy specialist at HSHS St. Mary’s Hospital Foundation, said there are not enough words to describe the tremendous kind of community leader Breheny is and was happy to see him and Norman be recognized for their years of service to the community.

“They’ve committed their lives to improving Decatur in so many ways in people, in places, and in organizations,” Fletcher said. “Decatur has had a lot of challenges over the 30 years I’ve been here and they've both been instrumental in helping Decatur to get better."

Still amazed by the surprise, Breheny said he only hopes to continue his work in Decatur for as long as he can and will always work with Norman on solving issues in the community as he admires her meaningful actions as a leader.

“She is not just an ideas person or a facilitator of ideas. Whatever she says, she backs up with action,” Breheny said. “I came in as an outsider and this community embraced me as an insider and I love this community for that reason. They don’t push people away, it’s not cliquish. They welcome you.”

Plaques of Breheny and Norman will join the wall soon at the civic center alongside other notable individuals like Anna Waters, A.E Staley Sr., James Millikin, Hieronymus Mueller and Roger E. Walker Jr.

GALLERY: Do you recognize all of the Decatur Hall of Fame honorees?

Community members gathered Tuesday to give thanks to the two inductees, president of the Decatur chapter of the NAACP Jeanelle Norman and form…

2021 WSOY Community Food Drive to be the last

"For 20 years, this food drive has been a remarkable achievement made possible thanks to a remarkable community."

The Decatur Leadership Institute recently marked the completion of another 14-week session.

'Long Story Short': How did Biden do in his first year in office?

'Long Story Short': How did Biden do in his first year in office?

Community members gathered Tuesday to honor and give thanks to Jeanelle Norman Kevin Breheny, the latest inductees to the Decatur Hall of Fame.

Community members gathered Tuesday to give thanks to the two inductees, president of the Decatur chapter of the NAACP Jeanelle Norman and former president of J.L. Hubbard Insurance and Bonds Kevin Breheny.