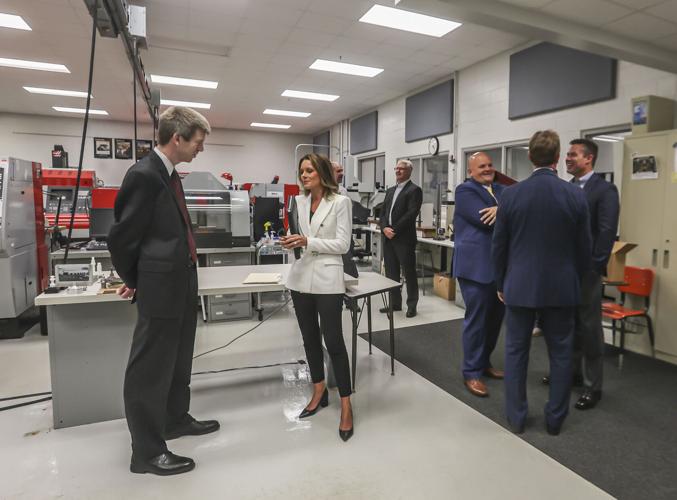 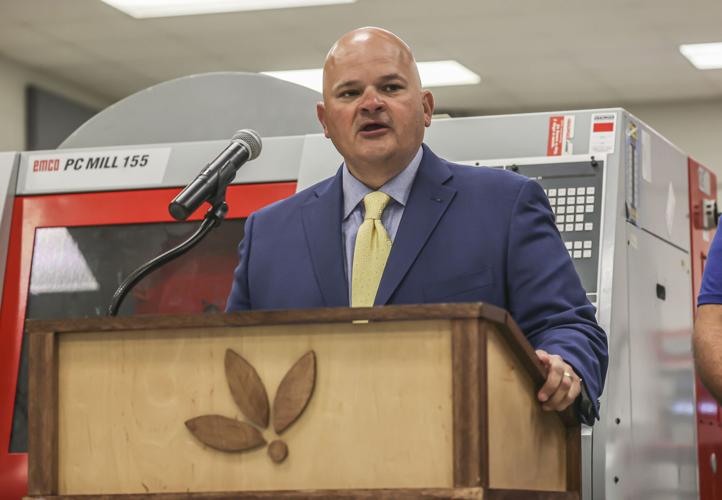 Mark Denzler, president of the Illinois Manufacturers’ Association, highlights the impact of manufacturing on the state's economy during a stop Wednesday in Decatur.

DECATUR — Manufacturers in Central Illinois are key to the state’s economy, according to a new economic report.

The Illinois Manufacturers’ Association this week released a study on the economic impact of manufacturing on Illinois conducted by independent economists at the University of South Carolina.

The study found that manufacturing in Illinois contributes a total economic input of between $580 billion and $611 billion annually, the largest contributor to the state’s gross domestic product of any industry.

“This new economic study confirms what we have long known — that manufacturing is the key pillar of our state's economy, and its success is vital to our state's success,” said Mark Denzler, the associations president and CEO, during an event Wednesday in Decatur.

Denzler spoke at Richland Community College, the first step of what will be a statewide “manufacturing matters” tour of major manufacturing centers. He pointed to Richland as an example of an institution preparing a higher-skilled workforce for the rapidly-developing industry.

“At Richland, we strive daily to deliver the advanced technical and essential skills training that provides the workforce necessary to continue Illinois’ strong manufacturing history and contribute to its future,” Cristobal Valdez, Richland's president, said in a statement released after the event.

Manufacturing is especially important for Macon County as it contributes 50% of the county’s annual economy.

According to the report, counties across Central Illinois generate billions of dollars both directly and indirectly from the manufacturing industry, in addition to creating thousands of jobs.

“The state of Illinois is blessed with a strong manufacturing base,” said Greg Webb, chair of the IMA Board of Directors and vice president of state government relations for Archer Daniels Midland Co.

ADM is a leading employer in the region and has its North American headquarters in Decatur.

Previous studies have underreported the manufacturing sector’s contributions to Illinois’ economy, according to an economist who conducted the IMA study.

“An important takeaway from this study is the sheer size of manufacturing’s economic presence in Illinois,” said Joseph C. Von Nessen, research economist at the Darla Moore School of Business at the University of South Carolina. “Every job created by a manufacturer spurs additional hiring and spending across multiple industries in the state.”

“The opportunities within the manufacturing sector are great,” Webb said.

Continuing to advocate for workforce preparation and recruitment is necessary, he said, in addition to taking actions toward lowering energy costs for manufacturers.

“Manufacturers are innovators and entrepreneurs, builders and producers, dreamers and leaders for solving our challenges and envisioning the future,” Denzler said. “It's imperative that our elected officials enact policies to continue to allow the manufacturing sector to grow in Illinois.”

U.S. cities where manufacturing is thriving

U.S. Cities Where Manufacturing Is Thriving

Nevada has experienced the most manufacturing growth over the past decade

Small and midsize metros where manufacturing is thriving

The Economic Impact of Manufacturing on Illinois

Here's the latest on Decatur-area businesses that are opening, expanding, moving or closing.

Decatur chosen for joint ventures of ADM and LG Chem

The joint ventures would support more than 125 jobs in the Decatur region, the companies said.

ADM is expanding its research efforts with its new ADM Science and Technology Center at the University of Illinois Research Park.

Mark Denzler, president of the Illinois Manufacturers’ Association, highlights the impact of manufacturing on the state's economy during a stop Wednesday in Decatur.