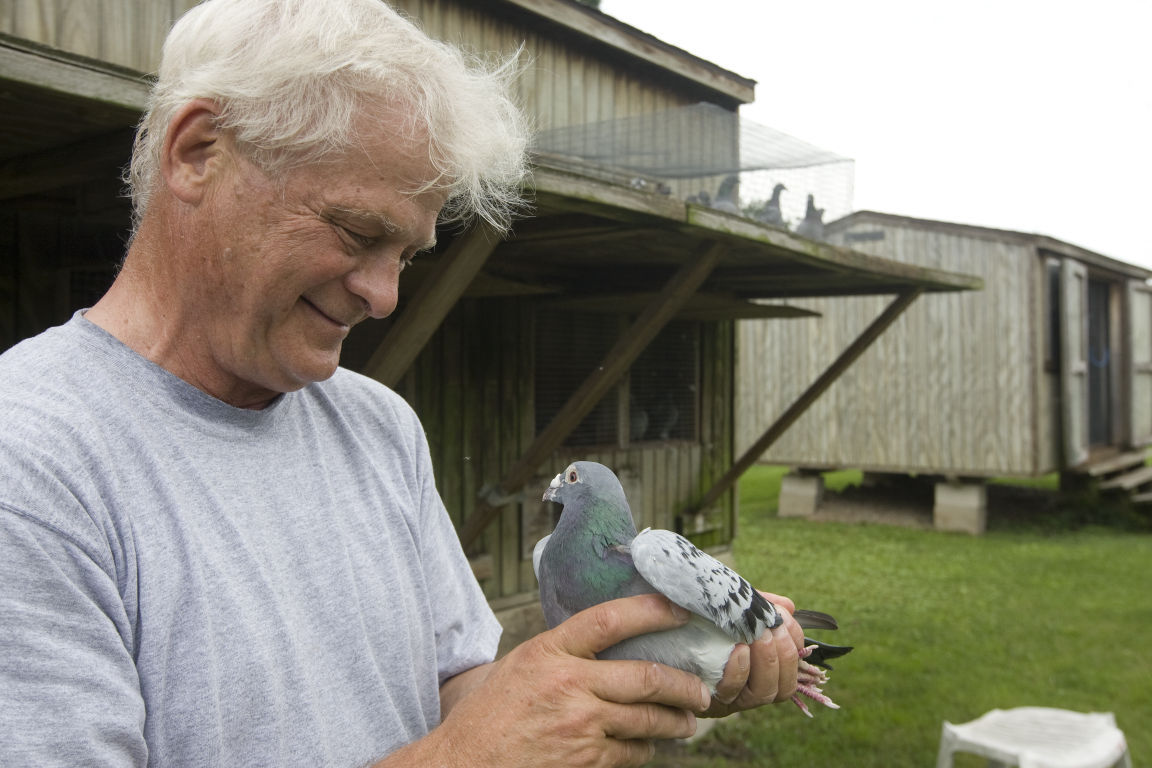 William Meyer holds one of his favorite racers. This pigeon flew more than 500 miles in a race last year.

Pigeons roost on one of Meyer's sheds after a short flight. 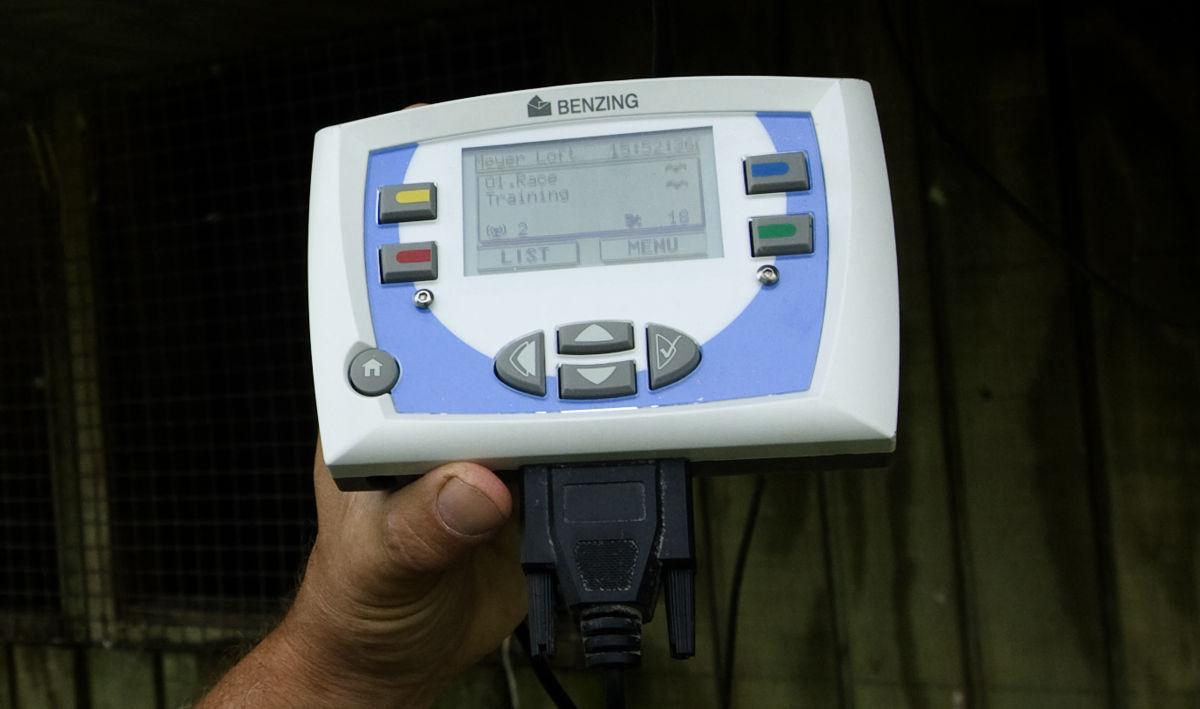 William Meyer holds the device which logs the pigeons arrival back at the lofts after a race. 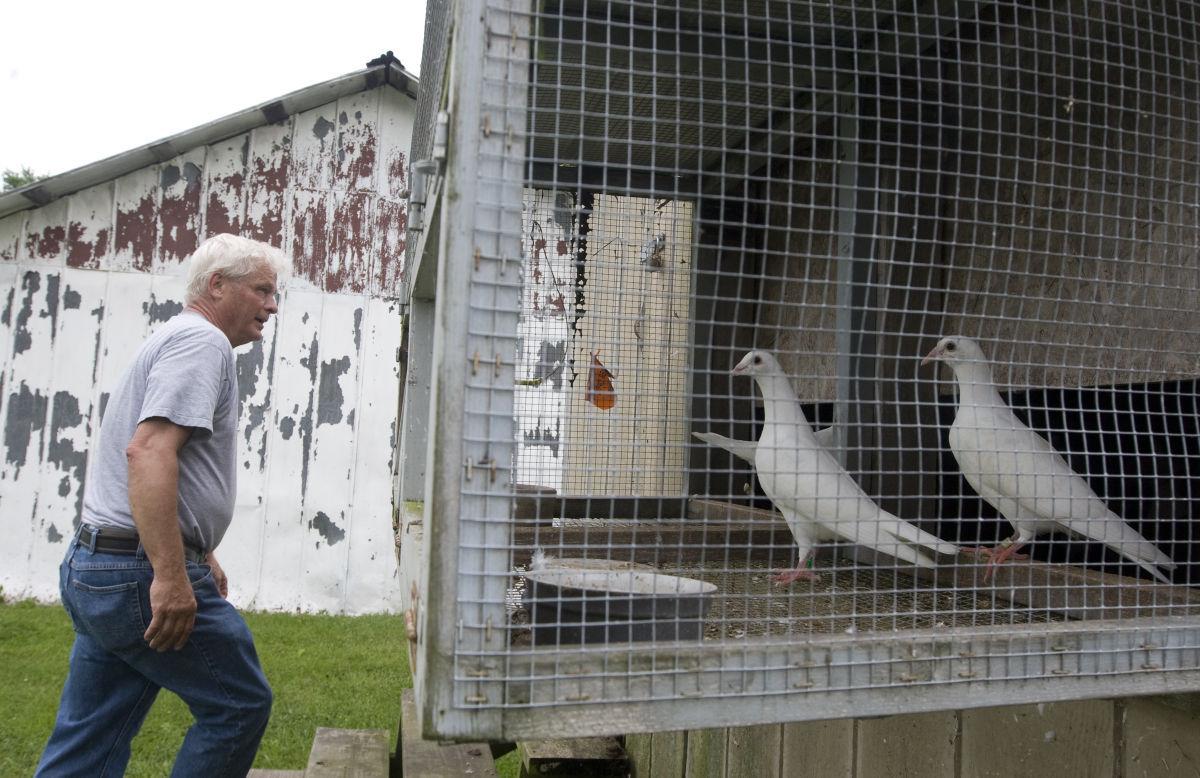 William Meyer also has a flock of white doves which are used for weddings and funerals.

DECATUR – William Meyer does his racing on a wing and a prayer.

A homing pigeon racer, or “fancier” to use the species-specific terminology, Meyer has his racing or homing pigeons driven out for distances up to 600 miles from their Decatur loft. Then, along with rival fanciers' pigeons, they are all released at the same time and the first homing pigeon who goes home again, wins.

The pigeons are up there winging it as fast as they can, and these feathered racers can really shift: Speeds of 60 mph are not unusual over short distances, and they can cruise comfortably at 35 mph. Back on the ground, Meyer looks to the skies and gets busy praying. Collisions with high-tension wires take their toll, and bandits at 12 o'clock are every pigeon's worst nightmare.

“Losses to hawks have really gotten horrific over the past 20 years,” says Meyer, explaining how predator numbers have soared since the world woke up to the dangers of pesticides such as DDT, which had been killing them. Now, however, the hawks are thriving and training their sights on homing pigeons.

“Birds of prey like hawks and falcons use the advantage of height,” adds Meyer, 67. “Falcons can go into a dive approaching 200 mph when they hit pigeons; it's incredible.”

For the average Joe homing pigeon, their best aerial defense, if they can spot the hawk in time, is to gain altitude to cut out the height advantage. Meyer says a good homer has a decent shot of outmaneuvering and outflying a hawk if they're at the same level. These aerial dogfights and other hazards can crop up at any time, and the fancier is often left to guess, with no evidence, just what happened when a particular bird stays forever gone into that wild blue yonder.

Some homers also lose their moral compass and fall from grace to take up with flocks of wild pigeons, where Meyer says former homers have been found living rough.

“They (the wild ones) show him where food and water is, where shelter is,” explains Meyer. “He (the wayward homing pigeon) maybe meets a fancy young lady and sets up housekeeping underneath a viaduct or who knows where.”

So, with all this fowl play going on, why go through the trials and tribulations of breeding and training pigeons at all? Meyer, racing secretary of the Decatur & Macon County Racing Pigeon Club, says it's an addictive passion he can't shake, and he's been racing pigeons for 48 years.

He puffs out his chest and preens with pride when recounting the races his birds have won or placed well in over the long flight of time. Stepping into a 24-foot-long and 8-foot-tall pigeon loft, he proceeds to show off a fine example of the breed by picking up a bird marked with leg tag “2106,” who recently finished a very respectable second in a 500-mile race from Oklahoma City.

Even visitors who know nothing about the pecking order of birds can't help but admire 2106's sleek mottled gray plumage (technical name “blue check”) and striking white flight feathers. With neck feathers set off by flashes of metallic green, he's a bird who looks like he was hand-painted by God while the Almighty was having a good day. Meyer says the thrill of watching a bird like this zip back home in maybe 14 or 15 hours after a 500-mile race never gets old.

“Every time you take 'em out and turn 'em loose, there is danger, there is no guarantee they're coming back,” says Meyer, who works as an insurance claims adjuster and appreciates the science of risk. “And if they're a little bit late, you are starting to get a little more worried, a little more depressed, and then all of a sudden – boom – you see that small dot coming home again. I get the same level of excitement out of it every time.”

How do the birds, who only fly during daylight, manage these extraordinary feats of navigation? There have been all kinds of experiments, and there are all kinds of theories, and it seems likely the birds are able to detect changes in the earth's magnetic field, as well as using visual and even scent landmarks. Mankind has been aware of this ability for at least 3,000 years, and homing pigeons were providing an airmail service in Baghdad by the year 1150.

The extraordinary birds stepped up to the perch in wartime, too, carrying vital messages while frequently under fire themselves. War pigeon “Cher Ami,” who saved countless Doughboy lives with his messages in World War I while flying for the U.S. Army Signal Corps, made it home to base despite being shot through the breast and having one of his legs shattered by a German sniper.

Cher Ami (“Dear Friend”, in French) was later awarded the French “Croix de Guerre” medal with Palm for heroism and died in 1919 from complications of his battle wounds. The pigeon's one-legged body (grateful soldiers did carve it a wooden leg while he was alive) was stuffed and remains on display in the Smithsonian.

Pigeon fancier and admirer Donald Lake keeps racing pigeons at his home near Niantic and says you can't help but respect plucky birds that take a licking but keep on ticking. Sometimes, however, they need a good human wingman to patch them up after a rough day in the aerial combat zone.

Lake, 70, has become something of an adept pigeon paramedic over the years and has developed his own effective treatment techniques for birds that limp home wounded following bloody encounters with hawks or wires. After explaining how he medically “cleans them up” and carefully repacks any of the birds' internal plumbing that has found its way to the outside through an open wound, he gets busy with glue.

“I use Super Glue to put skin back together that is too flimsy to suture,” he says. “And those birds will be out flying the next day.”

DECATUR – Tate & Lyle is a busy place, with trains and trucks and machinery that could be deadly to a baby bird.

William Meyer holds one of his favorite racers. This pigeon flew more than 500 miles in a race last year.

Pigeons roost on one of Meyer's sheds after a short flight.

William Meyer holds the device which logs the pigeons arrival back at the lofts after a race.

William Meyer also has a flock of white doves which are used for weddings and funerals.