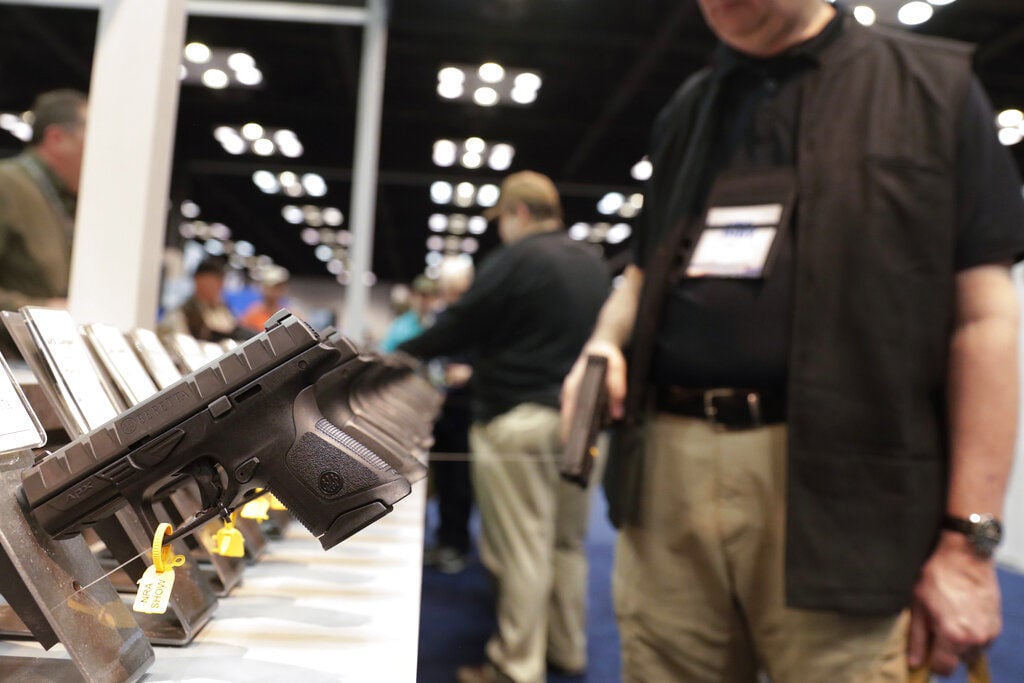 FILE - In this April 27, 2019, file photo, a gun enthusiast looks over the display of pistols in the exhibition hall at the National Rifle Association annual meeting in Indianapolis. The number of background checks conducted by federal authorities is on pace to break a record by the end of this year. (AP Photo/Michael Conroy, File) 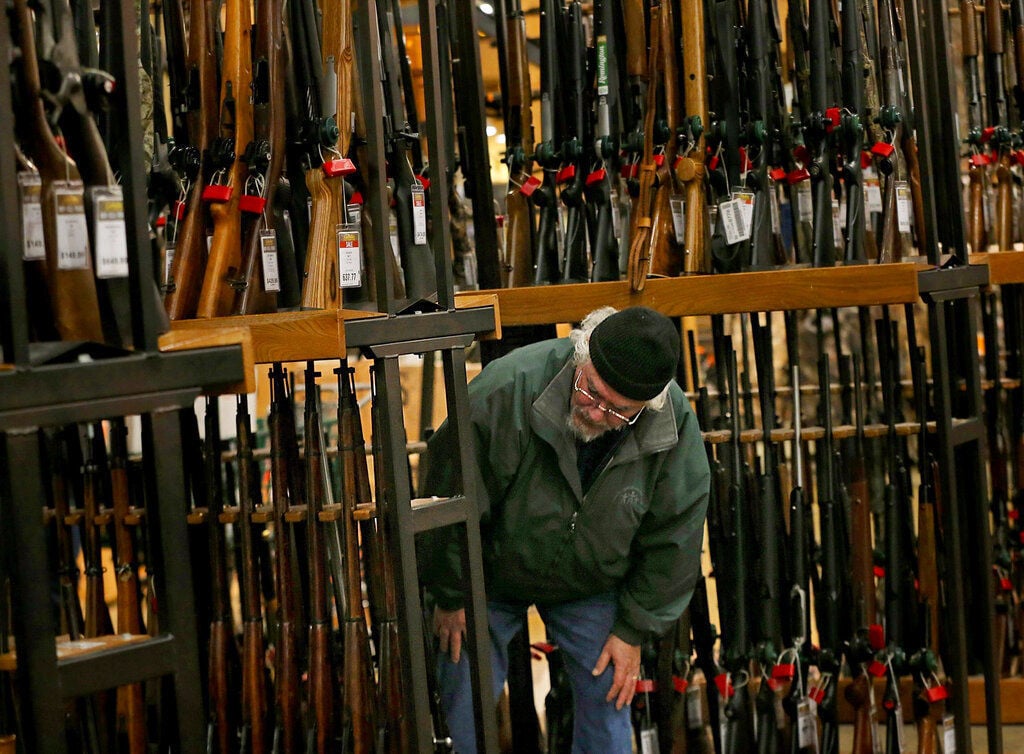 FILE - In this Nov. 29, 2019, file photo, a man looks at the shotgun section of Cabela's while shopping on Black Friday in Hazelwood, Mo. The number of background checks conducted by federal authorities is on pace to break a record by the end of this year. (Christian Gooden/St. Louis Post-Dispatch via AP)

WASHINGTON — Background checks on gun purchases in the U.S. are climbing toward a record high this year, reflecting what the industry says is a rush by people to buy weapons in reaction to the Democratic presidential candidates' calls for tighter restrictions.

By the end of November, more than 25.4 million background checks — generally seen as a strong indicator of gun sales — had been conducted by the FBI, putting 2019 on pace to break the record of 27.5 million set in 2016, the last full year President Barack Obama was in the White House.

Some analysts question how accurately the background check figures translate into gun sales, since some states run checks on applications for concealed-carry permits, too, and some purchases involve multiple firearms. But the numbers remain the most reliable method of tracking the industry.

In the years since President Donald Trump took office, the industry has struggled through what has been referred to as the Trump Slump, a falloff in sales that reflected little worry among gun owners about gun control efforts.

But with the 2020 presidential election less than a year out and virtually every Democratic candidate offering proposals to restrict access to firearms, fears appear to be driving up sales again.

Justices take up gun case, though disputed law has changed

“The Trump Slump is real, but the politics of guns has changed a little bit over the last year,” said Adam Winkler, a professor at the University of California, Los Angeles, School of Law and an expert on gun rights and politics. “As we’re coming up upon another presidential election, Donald Trump is vulnerable, and the Democratic presidential contenders are falling all over themselves to propose more aggressive gun reforms than their opponents.”

Trump has been viewed as one of the most gun-friendly presidents in modern history and has boasted of strong support from the National Rifle Association. He has addressed every one of its annual conventions since the 2016 campaign, and the powerful gun lobby pumped about $30 million into efforts to elect him.

Still, hopes of expanded gun rights under Trump’s watch haven’t materialized. Legislation that would make it easier to buy silencers stalled in Congress. In addition, Trump pushed through a ban on bump stocks, which allow semiautomatic rifles to mimic machine-gun fire. The gunman who killed 58 people in Las Vegas in 2017 in the deadliest mass shooting in modern U.S. history used such a device.

The industry has been going through one of its toughest periods, with some gunmakers, such as Remington Arms, filing for bankruptcy. More recently, Smith & Wesson’s parent company, American Outdoor Brands, announced plans to spin off its firearms unit, and Colt said it would suspend production of AR-15 rifles.

Amid some high-profile mass shootings in recent years, especially the Parkland school attack in Florida that left 17 people dead, gun control advocates have gained some momentum.

The crowded field of Democrats running for the White House has offered a variety of proposals to curtail gun rights. Former Texas Rep. Beto O’Rourke, whose state has seen repeated mass shootings this past year, went so far as to push for a mandatory buyback program for AR- and AK-style rifles before dropping out of the race, stoking gun owners’ fears when he declared during a debate, "Hell, yes, we're going to take your AR-15, your AK-47."

“Americans are choosing to invest their hard-earned dollars in their ability to exercise their rights and buy the firearms they want before gun control politicians attempt to regulate away that ability,” said Mark Oliva, spokesman for the National Shooting Sports Foundation, which represents the gun industry.

Still, some experts took issue with the figures and said it is premature to declare the Trump Slump is over.

“These numbers cannot be taken be taken at face value,” said Jurgen Brauer, a retired business professor and now chief economist at Small Arms Analytics, which consults on the firearms industry.

Brauer said the numbers are increasingly skewed by states such as Kentucky that also run background checks when they issue or renew a permit to carry a concealed firearm. In October, for example, the state ran more than 280,000 checks through the NICS system for permits.

“That number has been rising over time as increasingly states check with some frequency on their existing permits,” Brauer said.

The NICS system was created after passage of the Brady Bill, which mandated background checks to buy a firearm. Convicted felons, domestic abusers and people who have been involuntarily committed to a mental institution are among those who cannot legally purchase a weapon.

In 1999, the first full year the system was used, just over 9 million background checks were conducted. It was near the end of Democrat Bill Clinton’s second term and in the midst of a 10-year ban on assault rifles that expired in 2004.

Background checks declined under President George W. Bush but picked up again in 2006 and have mostly risen since then, except for 2014 and 2017. In 2018, there were 26.18 million background checks.

“Gunmakers are promoting the idea that you should buy these guns now because they may be banned in the future,” Winkler said.

Officers responded to a report of shots fired around 6:48 p.m. and later tracked down the 19-year-old based on a description of the suspect's clothes given by the witness, documents say.

A man and a woman stood outside a home on the private Portland Place in the Central West End, yelling and pointing guns at protesters as they walked by.

A Southern California man who tested positive for coronavirus after attending a party expressed his fear and regret a day before he died.

Virus update: View 9 charts that track COVID-19 spread in our state and nation

On this July Fourth, health officials worry more U.S. residents will abandon measures to slow the spread of COVID-19. See how our state compares to others in maps and charts that show virus spread, testing and more.

The woman approached the bison to take a picture and got within 10 feet of it multiple times before it gored her on June 25, according to a news release from the park.

Seattle police confronted protesters and tore down encampments at the "Capitol Hill Occupied Protest" zone. See video from the scene and scroll down for more photos.

Personal-injury lawyers Mark and Patricia McCloskey, who pointed a rifle and pistol at protesters Sunday night in front of their Portland Place mansion, said through their lawyer Monday that they felt threatened by two “bad actors” who destroyed an iron gate to their private street and lobbed insults at them.

As a surge of infections hits the South and West, GOP officials are pushing back against the notion that masks are about politics, as President Donald Trump suggests. Get caught up on the morning's virus developments.

Coronavirus update: Record new daily infections in US; the science behind bar closures; and more

The U.S. recorded 50,700 new cases, according to a tally kept by Johns Hopkins University, as many states struggled to contain the spread of the pandemic. Get caught up on the latest virus news here.

FILE - In this April 27, 2019, file photo, a gun enthusiast looks over the display of pistols in the exhibition hall at the National Rifle Association annual meeting in Indianapolis. The number of background checks conducted by federal authorities is on pace to break a record by the end of this year. (AP Photo/Michael Conroy, File) 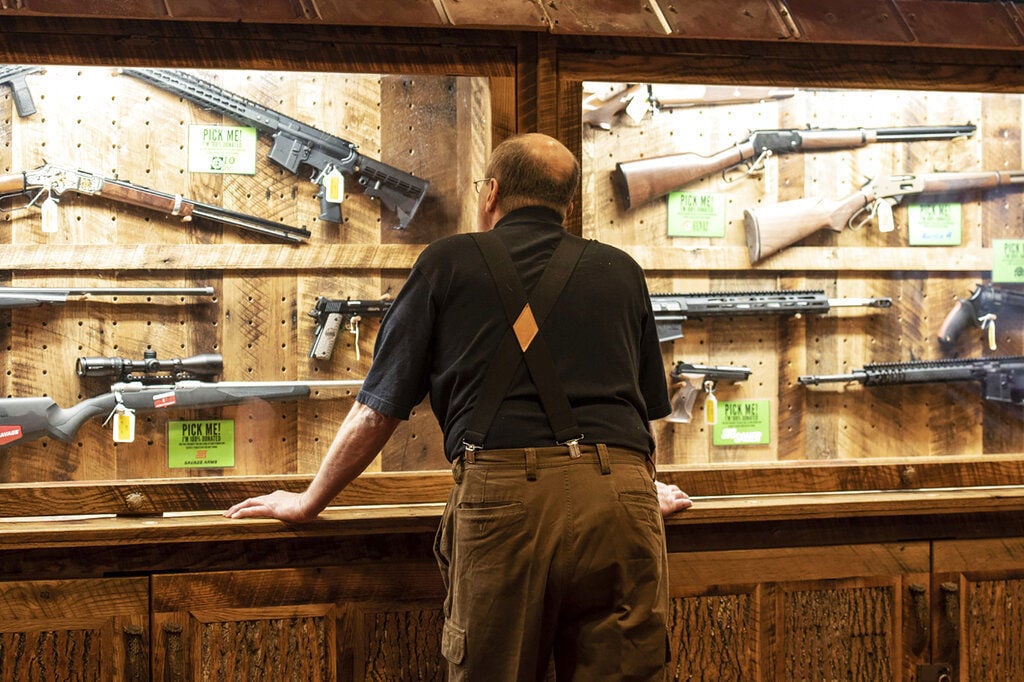 FILE - In this April 25, 2019, file photo, a man looks at cases of firearms in the halls of the Indianapolis Convention Center where the National Rifle Association will be holding its 148th annual meeting in Indianapolis. The number of background checks conducted by federal authorities is on pace to break a record by the end of this year. (AP Photo/Lisa Marie Pane, File)

FILE - In this Nov. 29, 2019, file photo, a man looks at the shotgun section of Cabela's while shopping on Black Friday in Hazelwood, Mo. The number of background checks conducted by federal authorities is on pace to break a record by the end of this year. (Christian Gooden/St. Louis Post-Dispatch via AP)