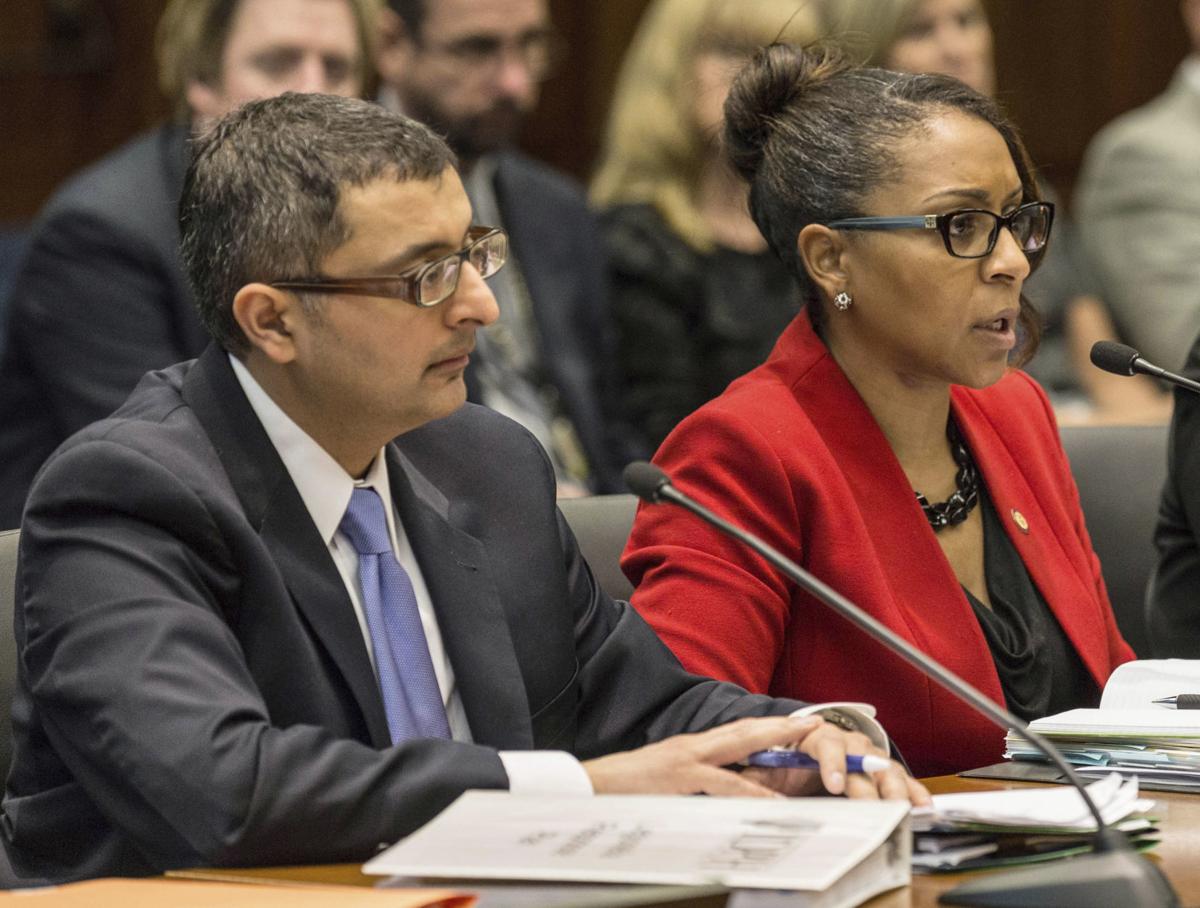 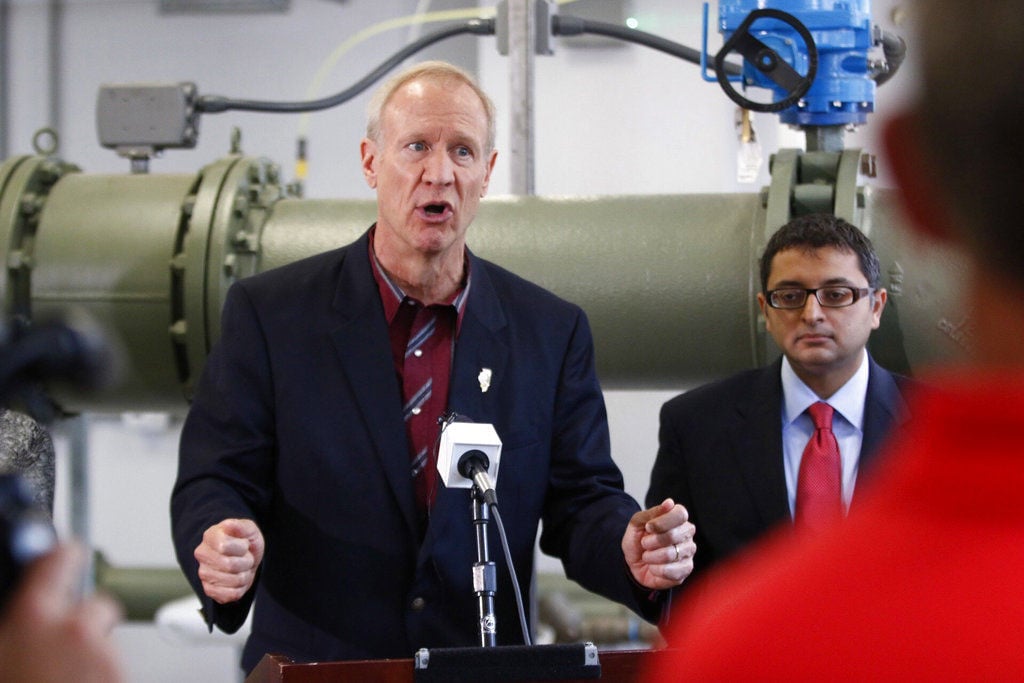 In this July 27, 2016 file photo, Gov. Bruce Rauner speaks at the water treatment facility of the Illinois Veterans Home, in Quincy. Rauner's administration says it will hire architectural and design teams by summer to redevelop the campus.

CHICAGO — The head of the Illinois Department of Veterans' Affairs is stepping down following months of criticism over how Republican Gov. Bruce Rauner's administration has handled a deadly outbreak of Legionnaires' disease at state-run veterans home in Quincy.

Former Army helicopter pilot Erica Jeffries has led the agency since Rauner named her to the post in 2015. An outbreak of the water-borne legionella bacteria began that year and has claimed the lives of 13 residents since. On Friday, a Rauner spokeswoman said Jeffries is leaving the agency and "accepting an offer in the private sector."

Rauner has repeatedly defended his administration's response, including bringing in the U.S. Centers for Disease Control and Prevention and an overhaul of the home's water filtration system. But the disease has persisted.

Since Rauner declared his goal was "zero instances of legionella infection" after a week-long stay at the home in January, several more residents have been sickened. That included an Air Force veteran who Rauner met during his stay and later invited as a guest to his annual State of the State speech at the Capitol.

The issue has become a serious political liability for Rauner as he seeks a second term. Democratic governor candidate J.B. Pritzker has criticized Rauner for "fatal mismanagement" of the outbreak, and state Sen. Sam McCann, a conservative who has launched a third-party bid for governor, called on Rauner's Illinois Department of Public Health director to resign months ago. Democratic U.S. Sen. Dick Durbin plans to have a news conference at the home on Monday.

Meanwhile, lawmakers in both parties have questioned if the administration alerted families to the disease in a timely manner and accused the governor of failing to do enough to address the problem.

"He said, I don't now how many times even on his six-day trip, 'We did everything, it's excellent what's going on down here, this is tremendous,' and yet more stuff keeps coming out," said Sen. Tom Cullerton, a Democrat from Villa Park who has led several legislative hearings to look into the situation.

"More things keep showing up, and now we have a director who resigned. I mean we should really ask the governor what the heck he's thinking and what he's gonna do and what's going on," Cullerton added.

"We thank her for her tremendous service to the State of Illinois and will be vetting appropriate successors in the coming weeks," Bold said.

Sen. Paul Schimpf, a Republican from Waterloo who sits on the veterans' affairs committee, praised Jeffries' time at the helm of the agency.

"Her leadership allowed the department to fulfill its mission in the midst of a toxic political environment," Schimpf said. "We owe her our thanks for her dedication and willingness to serve our veterans."

Jeffries could not be reached late Friday, and the Department of Veterans' Affairs did not immediately respond to a request for comment.

Following the initial outbreak in 2015, which sickened more than 50 people, Rauner's administration spend more than $6 million to update the home's water treatment system. But officials with the CDC have said the disease may be present in the water pipes and might never be eradicated.

Outside engineers have suggested the state consider replacing the entire plumbing network at the home, which was founded in 1886 and is the state's largest and oldest veterans home.

Rauner has appointed a task force to come up with solutions. In March, Rauner chose former head of Central Management Services Mike Hoffman to oversee efforts to overhaul the facilities at Quincy and put in place a long term plan. Hoffman has been paid $20,000 a month to coordinate the state's efforts.

During the most hearing about the home, lawmakers asked Hoffman to bring them requests that may be needed to fast-track development at the home. They asked for the report to be finished by Friday to make sure there is enough time to move bills through the bureaucratic channels of the Statehouse before session is scheduled to end in May.

Cullerton said lawmakers have yet to receive it. Rauner's spokeswoman said it would be sent next week.

Campaign between billionaires Rauner, Pritzker for Illinois governor expected to be expensive, brutal and long

SPRINGFIELD — While the Department of Public Health faced the baffling return of Legionnaires' disease at a state-run veterans home in 2016, a…

SPRINGFIELD — Gov. Bruce Rauner is unconcerned that his Public Health Department's chief of staff took a 2016 leave of absence for political c…

'This is our year': Pritzker urges Illinois Democrats to pull together

BLOOMINGTON — J.B. Pritzker promised Tuesday to go to bat for Democratic candidates across Illinois this year.

In this July 27, 2016 file photo, Gov. Bruce Rauner speaks at the water treatment facility of the Illinois Veterans Home, in Quincy. Rauner's administration says it will hire architectural and design teams by summer to redevelop the campus.