The Great Lakes are in imminent danger of being overrun with invasive Asian carp, now appearing on the doorstep of Lake Michigan. Or, something else is going on.

For the first time, researchers have found DNA from two types of invasive Asian carp in Bubbly Creek off the Chicago River's South Fork, only about 2½ miles from Lake Michigan.

That's alarmingly close. Should invasive Asian carp make it into the Great Lakes, many scientists believe they would cause a huge disruption to the aquatic food chain and damage, perhaps irreparably, a $7 billion annual Great Lakes fishery.

But there's a catch: The findings are so-called environmental DNA, or eDNA. The samples don't come from the fish themselves, but via an emerging science that allows researchers to find the DNA of individual species — in this case bighead and silver carp — in water samples, using sophisticated collection and testing methods.

Studies show eDNA from carp can exist in a bird's gut for up to eight days, and be present in its feces. Genetic material can also be transferred on the many hulls of ships and boats passing through the Chicago Area Waterways System as well.

"The presence of eDNA, environmental DNA in the water, does not mean that there is a live fish in the water," said U.S. Fish and Wildlife Service spokeswoman Katie Steiger-Meister.

But the Bubbly Creek eDNA findings, from testing Oct. 8 and confirmed and announced Nov. 1, are especially unusual. They occurred more than 15 miles upriver from a series of electric barriers on the Chicago Sanitary and Ship Canal, operated by the U.S. Army Corps of Engineers at Romeoville, Illinois, to deter carp passage. And this was no anomalous blip — more than 70 DNA "hits" were found in the creek, unmistakably carrying the genetic signature of bighead and silver carp.

"When we have eDNA sampling down in the Illinois River, where we have a lot of fish, we don't get this result," she said. "Even where you have a large population of (Asian carp), and they are jumping out of the water, you normally would not see this."

The finding prompted a week of scouring the creek and connected canal with U.S. Fish and Wildlife, the Illinois Department of Natural Resources and Army Corps using gill nets and electrofishing, an electrical charge to stun any fish in the water. But no carp were found.

Invasive Asian carp have, for years, made their way up from the South, where they were introduced in the 1960s and '70s to control algae blooms in aquaculture facilities, farm ponds and sewage lagoons. Floods and human mismanagement helped the carp escape into the Mississippi River system, where their spread has exploded.

It was a fall 2009 finding of Asian carp eDNA in the Calumet River south of Chicago, about 8 miles from Lake Michigan, that activated Great Lakes states and the U.S. and Canadian governments to take action to try to prevent the fish from reaching the Great Lakes.

That December, a solitary bighead carp was found in the Chicago Sanitary and Ship Canal, just above the Lockport Lock and Dam about 37 miles from Lake Michigan.

In June 2017, a commercial fisherman pulled an 8-pound, 28-inch, adult silver carp out of the Calumet River, about 9 miles from Lake Michigan.

The latest finding of numerous hits of eDNA in Bubbly Creek doesn't change what should already be considered an urgent situation, said Joel Brammeier, president and CEO of the Chicago-based nonprofit Alliance for the Great Lakes.

"It’s another flashing red alarm in a series of alarms we’ve had over the last decade, telling us that what we’re doing right now isn’t enough," he said.

While its name may sound lovely, Bubbly Creek is anything but.

Throughout the late 19th and early 20th centuries, Chicago's vast meatpacking industry used the creek, a man-made canal off the South Branch of the Chicago River, to dump its wastes: carcasses, entrails, blood and chemicals. The decomposing meat caused methane and hydrogen sulfide bubbles to rise in the water.

Author Upton Sinclair wrote about the creek in his seminal 1906 novel, "The Jungle," which shone a light on the shocking conditions of Chicago's Union Stock Yards and meatpacking industry. The book is considered a model of early investigative journalism, informed by Sinclair working undercover as a meat-packer for weeks. The public and governmental outrage that ensued after its publication led to significant reform of meat inspection and how food was handled, including the creation of an agency that would later become the U.S. Food and Drug Administration.

The still-troubled Bubbly Creek is a puzzling spot at which to find numerous eDNA hits for invasive bighead and silver carp.

"We do not expect to find fish in Bubbly Creek because it is horrible," McGovern said.

"This creek is not great habitat ... it's just very degraded."

The eDNA sampling can be tricky because of the messy soup it's pulled from in Bubbly Creek, McGovern said.

"We have validated and improved the methods for detecting those fragments, but there’s background noise," she said. "And with wastewater sources, the sewer systems and what’s coming from Chicagoland yuck, what’s in there? That’s something we just haven’t looked at."

A possible clue to the Bubbly Creek Asian carp eDNA mystery lies at the end of the canal, where the Racine Avenue Pump Station of the Metropolitan Water Reclamation District of Greater Chicago pumps city sewage and storm-water — and sometimes, in heavy rain events, dumps some of it into Bubbly Creek. The facility collects storm water running off from a 36-square-mile area. The neighborhood surrounding Bubbly Creek is Chicago's Chinatown district. Asian carp is eaten there, and sold in fish markets, McGovern noted.

"We need to do more work on where the water is coming from — work with MWRD and try to get into some of their stations to sample eDNA within the wastewater facilities. And look in the sewers.

"It could be (coming from) human waste, and it could be water from fish markets. Just imagine all that carries eDNA — whether you’re chopping up a fish, eating it — coming in waste from communities in this area. We need to understand that better."

It's noteworthy, however, that eDNA testing began in Bubbly Creek in 2013. Asian carp consumption was occurring in Chinatown; the fish were sold in neighborhood markets, and the Racine Avenue Pump Station moved combined sewage overflows into Bubbly Creek throughout that time period. Yet this fall's tests were the first to show the numerous Asian carp eDNA hits.

An added factor may be that this has been an unusually wet year, McGovern said.

"As recently as Halloween, they had a combined sewer overflow event," she said.

The Army Corps in May presented to Congress its recommended plan to stop Asian carp from entering the Great Lakes: a series of deterrents at the Brandon Road Lock and Dam on the Des Plaines River in Joliet, Illinois, about 35 miles west of Lake Michigan. The site would use sounds, bubble curtains, an electric barrier, and a lock that flushes water back downriver, as well as other features.

The early price tag on the project has risen to more than $830 million, of which the federal government would cover two-thirds, and the state of Illinois, with the assistance of other Great Lakes states, covering the remainder. But that amount includes a whopping 66% contingency cost because of numerous uncertainties that could be clarified in planning, engineering and design.

Those pre-construction design costs are $10 million for non-federal partners, and $18 million for the federal government. Illinois Gov. J.B. Pritzker is currently considering whether to sign off on proceeding with the engineering and design phase.

"There is no excuse for us not to do something proactive, now, to keep them out," he said. "Because once they are in, it's much more costly — not just from the management side of things but the impact economically for the region."

Taking eDNA readings can never replace the net trawling and electrofishing agencies do on the Chicago waterways twice a year in the spring and fall, looking for invasive carp, McGovern said. But it remains important, she said.

"In combination with traditional surveillance, eDNA is another tool to say what's happening in these waters," she said. "Whether it's fish (producing the most recent eDNA hits) or whether it's something else, it's very interesting. And we need to figure out what that is."

Asian carp have never breached a body of freshwater the size of Lake Michigan. Here's the bizarre way they could survive and thrive in the world's fifth largest lake.

CHICAGO — As Asian carp have stormed up the Illinois River in the past several decades, looming precariously close to Lake Michigan, scientist…

TRAVERSE CITY, Mich. — Illinois Gov. J.B. Pritzker is among the Democratic governors of states in the Great Lakes region Monday urged the cand…

Bananas that last forever? Extending shelf life is a key weapon in the battle against food waste, and one Illinois startup is on the front lines.

Over the past six years, Katie Johnson survived 10 overdoses in Springfield and managed to stay away from heroin for two years before e-cigare…

Illinois will start taxing many parking spots Jan. 1. Here are the details.

When lawmakers were looking to fund capital projects, much of the focus was on doubling the gas tax and expanding gambling. But lawmakers also raised other taxes, including one on many parking spaces. Details >>>

Walk to the back of the Five Below store, past the rolls of wrapping paper, the winter hats, the makeup kits, and you will arrive at displays …

In this file photo taken May 10, 2011, jumping Asian carp feed off the muck filled floodwater off President's Island in Memphis, Tenn. 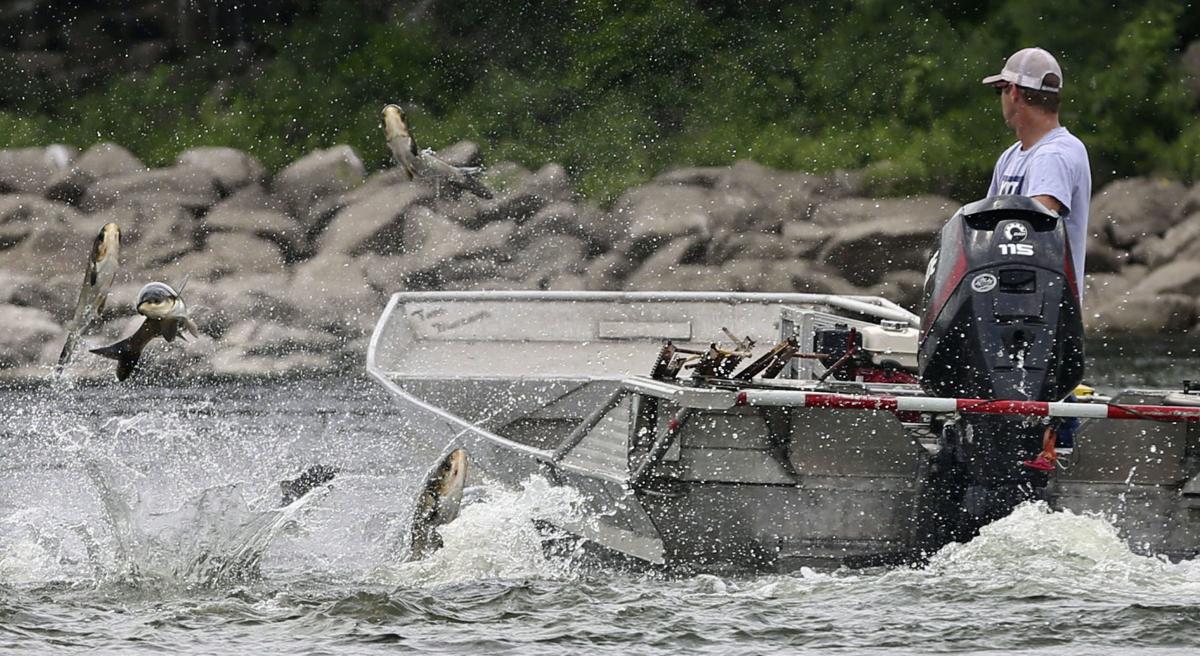 State-contracted commercial fishermen remove Asian carp from the dam on Lake Decatur in July. Silver carp, one of the species found in the area, are known for their ability to leap as high as 10 feet out of the water.