Even five decades later, former federal prosecutor Dick Schultz has a pretty good idea of when the legendary Chicago 7 trial started to go off the rails: during the testimony of the very first witness.

That day in September 1969, U.S. District Judge Julius Hoffman halted the trial after he was informed that a juror had received a threatening letter purportedly sent from the Black Panthers. Hoffman, famous for his ironclad control of his courtroom, told attorneys from both sides to keep the information to themselves so he could question the juror in private, Schultz told the Chicago Tribune in an interview.

Instead, the defendants held a lunchtime news conference stating the threatening letter had actually been sent by the government as part of a “plot” to taint the panel. An irate Hoffman to order the jurors sequestered for the rest of the five-month trial.

The next morning, defense attorney William Kunstler asked for an emergency hearing into the letter’s origin, seeking the testimony of none other than FBI Director J. Edgar Hoover and Attorney General John Mitchell, Schultz said.

“That sort of gave me an idea where we were going,” Schultz said. “And it went downhill from there.”

Schultz, 82, is the last living attorney from either side of the Chicago 7 trial, in which political activists were accused of conspiring to incite riots during the 1968 Democratic National Convention in Chicago.

Schultz is scheduled to talk about the case at 3 p.m. Tuesday during an online seminar sponsored by the Federal and 7th Circuit bar associations and moderated by U.S. District Judge Thomas Durkin and U.S. Magistrate Judge Jeffrey Cole. Registration is required and available online for free, though space is limited.

The Chicago 7 case drew national attention and exposed the depths of the country’s divisions over the Vietnam War and civil rights as well as the fairness of the criminal justice system. Among the high-profile defendants were “Yippies” founder Abbie Hoffman, counterculture icon Jerry Rubin, and Bobby Seale, one of the co-founders of the Black Panther Party.

The circuslike atmosphere of the trial -- which included frequent courtroom fisticuffs, outbursts of singing and chanting, and, perhaps most famously, the judge’s order to have Seale bound and gagged at the defense table -- has been given big-budget movie treatment in “The Trial of the Chicago 7,” written and directed by Aaron Sorkin and now streaming on Netflix.

Schultz, who is portrayed in the film by actor Joseph Gordon-Levitt, says he enjoyed some aspects of Sorkin’s Hollywood take, but that it ultimately “didn’t touch on what really happened.”

“Everything was so exaggerated, you would think the judge was conducting a trial in the Soviet Union,” he said. He also thought that he was falsely portrayed as somehow embarrassed by the whole prosecution when in reality, “it was precisely the opposite.”

Schultz also took issue with the film’s climactic scene, when he is portrayed rising to his feet while defendant Tom Hayden reads the names of U.S. soldiers killed in Vietnam as the group is being sentenced.

“That never happened. It was a total fantasy for Hollywood, and that’s fine,” Schultz said. The film moment was entertaining, he added, but one other thing: “I never told the attorney general of the United States that we didn’t have a case.”

“We knew that we had more than enough evidence to convict,” Schultz said, speaking of his co-counsel, Assistant U.S. Attorney Thomas Foran, who died in 2000. “The only question was could we ever get to a verdict.”

As a young prosecutor, Schultz was head of the U.S. attorney’s office’s criminal division when the riots broke out in August 1968. He was at the Chicago Hilton and out on the streets of Lincoln Park and the Loop watching the violence unfold between police and protesters.

“I saw it all,” Schwartz said in a telephone interview last week from his home in Glenview. “I was trying to do what I could, but didn’t accomplish anything.”

Later, he helped lead a grand jury inquiry into the unrest, resulting in not only criminal charges against eight protesters but also a number of indictments against police officers -- all of whom were eventually acquitted.

Schultz said his office was acutely aware that the trial of Hoffman and his co-defendants was going to be used as a platform for their beliefs and to stick a fork in the eye of what they perceived was a racist and unjust legal system.

Before the trial even began, Schultz said, the defendants announced to their followers that “people should come to this trial and fight the pigs in Chicago just like they did a year ago.”

“We were not surprised by any of it,” he said. “They were revolutionaries, and they were going to try to destroy our trial. And they did a damn good job of it.”

Schultz said that he and his team, which refrained from public comment throughout the trial, lost the public-relations battle from the outset. Every day, the news depicted throngs of protesters outside the Dirksen U.S. Courthouse on South Dearborn Street and relayed the antics from the courtroom, where Hoffman often clashed with the defendants and their attorneys and struggled to maintain control.

“The spectators in the courtroom were totally uninhibited," Schultz recalled. “They lined up every day to get in, would scream obscenities and disrupt the proceedings.”

If things started to get out of hand, a deputy U.S. marshal would eventually have to try to wade through the rows of spectators to remove the offender from the courtroom. The person would often fight back, and as soon as they did, others would come to their aid and “go after the marshals,” who would be forced to call for backup, Schultz said.

What often ensued reminded Schultz of a barroom brawl scene from an old Western film.

“I used to love those movies, with people being thrown over the bar and chairs being smashed over peoples' heads,” Schultz said. “When I was standing in the courtroom watching all this, it was just like what I I saw when I was a kid. It was really exciting. But it was painful too.”

In part due to the daily disruptions, the trial slogged on for nearly five months, featuring a total of 160 witnesses. Schultz was told by federal law enforcement agencies that his life could be in danger and received 24-hour police protection at his house. He said it began to wear on him and his partner, Foran, but they were determined to see it through.

“Every morning, Tom and I would take a private elevator to the 23rd floor. We’d stand there in silence for a minute or two and just look at each other,” Schultz said. “There wasn’t much to say."

He said Foran would sometimes just drop his head and say, “I’d rather be going to the dentist.”

“And I felt the same way,” Schultz said. “It was like walking into a circus every morning.”

There were also moments of levity. At some point in the middle of the trial, Schultz’s wife brought their then-10 year-old daughter to see the testimony of a witness who was known for singing protest songs. After defense lawyers asked the witness if he could pick up his guitar and sing a few bars, Schultz sprang to his feet and objected.

From the back of the courtroom, Schultz heard his daughter’s voice cry out, “Aw, Daddy, let him sing!”

Schultz also said he believes the trial’s most infamous moment is one of its most misunderstood. When Hoffman ordered Seale bound and gagged in October 1969, Schultz said, it was the culmination of a carefully orchestrated series of events in which the Black Panther leader’s attorneys either withdrew from the case or refused to participate in his defense. Seale, meanwhile, argued loudly at every turn that he was being denied his rights to a defense.

When Hoffman denied Kunstler’s motion to withdraw -- which Schultz said he was bound to do under the law -- Seale erupted in court, telling the judge, "Listen, old man, you keep on denying me my constitutional rights and you’re going to be exposed. ... You’re a racist, fascist bigot!” according to Schultz’s recollection.

Schultz said that at the time everyone, including Kunstler and Seale, was aware of a ruling from Chicago’s federal appeals court just months earlier saying that unruly defendants could not be removed from their own trial, even if they had to be restrained.

That Hoffman would eventually order that remedy for Seale seemed at the time like an unstoppable train, Schultz said.

“The whole thing was a setup, a way to get Seale bound and gagged so they could demonstrate to the world that the federal courts were racist,” Schultz said. "They played it to the hilt. There was nothing we could do.”

When the jury stepped into the box and saw Seale restrained at the table, they looked shocked, Schultz said. “One of them was crying. It was sad to watch.”

The Tribune’s story in the next day’s newspaper described how Seale tried to rise for the jury and “rattled his chains and manacles against his metal chair,” his mouth covered in a cloth and several pieces of white tape.

The account said the last straw for Hoffman appeared to be when Seale had tried to lunge at Schultz during a courtroom outburst earlier that day.

Seale was ultimately severed from the trial and sentenced by Hoffman to four years for criminal contempt, a term later reversed by the appellate court. The government chose not to retry him on the conspiracy charges.

On Feb. 18, 1970, the jury acquitted each of the seven remaining defendants of the conspiracy charge. Five, including Abbie Hoffman, were convicted of crossing state lines to incite a riot and later sentenced to five years in prison, but those convictions were also overturned, as were sentences for contempt handed down by Hoffman.

Schultz, meanwhile, left the U.S. attorney’s office soon after the case was over and built a career in private practice. Despite all the renewed attention on the events of the trial, he said the story has always seemed skewed, depending on who’s doing the telling.

“We were renounced and laughed at,” he said. “They (the defendants) appeared to be caring, lovable people who were being oppressed. Every night I’d watch the TV news and think, ‘Were we in the same courtroom?’"

Arguments for and against graduated income tax ramp up as Nov. 3 grows closer

With only two weeks until the election, House Republicans on Monday ramped up their attacks on the proposed constitutional amendment to bring …

Hammond Mayor Thomas McDermott Jr. described the experience as a “fur missile” being launched his way. See the video:

Protests at the 1968 Democratic Convention in Chicago led to "The Trial of the Chicago 7," a film looking at a great divide in the country.

Writer/director Aaron Sorkin, right, talks to Jeremy Strong, who plays Jerry Rubin, during the filming of "The Trial of the Chicago 7." 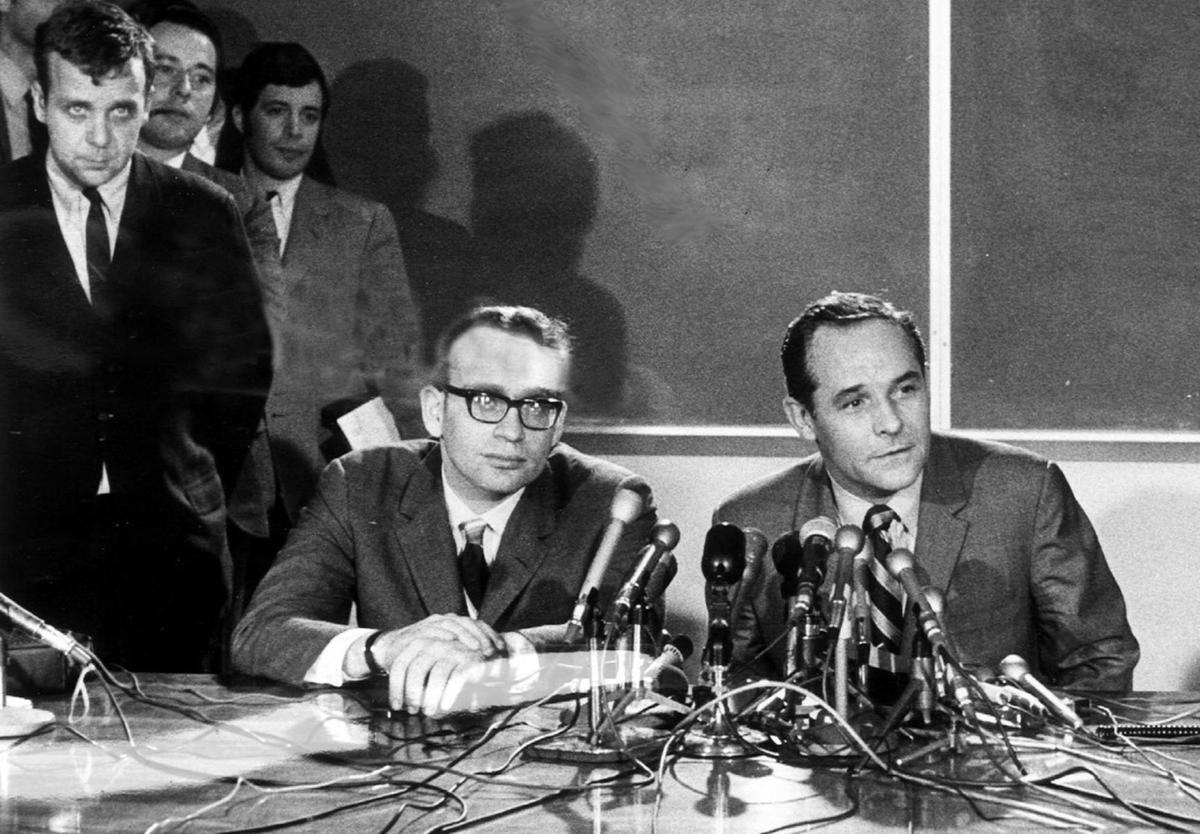 Assistant prosecutor Richard Schultz, seated at left, and Assistant U.S. Attorney Thomas Foran conduct a news conference after the verdict in the Chicago 7 trial on Feb. 18, 1970.