The 36-13 vote capped more than two years of anticipation over whether Mayor Lori Lightfoot could finally say she delivered something she first promised to accomplish during her first 100 days in office.

Meanwhile, community activists supportive of the compromise can tout a victory in police accountability, calls for which grew louder after the Minneapolis police murder of George Floyd last year, as well as fatal shootings by Chicago police.

Talks had previously stalled between her office and grassroots activists who pushed competing proposals.

South Side Ald. Roderick Sawyer, 6th, who co-sponsored the ordinance, said the deal will help residents feel like they have a stake in solving crime.

“The problem that we’re having now is that there’s a disconnect between the police and our communities as it relates to solving crimes,” Sawyer said. “In order for us to get back to that, we have to get the community involved. So with this ordinance, we believe this takes a strong step with re-engaging, resetting our relationships between the community and police.”

Ald. Carlos Ramirez-Rosa, 35th, who was aligned with activists during the negotiations and helped broker the final deal, said Wednesday prior to the vote that he wished the final version provided stronger oversight. But he also said grassroots organizers should be proud of it.

And North Side Ald. Andre Vasquez, 40th, who joined other aldermen in last-minute negotiations with the Lightfoot administration on the deal, said police officers he’s spoken to know they need better oversight. “They don’t write the laws. That’s us here in this council,” Vasquez said.

“We don’t need police reform; we need family reform,” Sposato said. “Families need to take ownership and start watching over their children.” Sposato wore a CPD lapel pin, along with a grey “Defend the Police” T-shirt under his suit coat with a white American flag with a single blue line.

The City Council session followed two hours of heated debate during a Tuesday evening Public Safety Committee meeting, which advanced a compromise ordinance by a 12-8 vote after last-minute wrangling.

The ordinance establishes a citizen panel to oversee Chicago police — but not with all the powers asked for by the grassroots organizers. For one, the oversight board would only have the ability to pass a non-binding no-confidence vote on the police superintendent. That concession was decided after activists dropped their demand for a commission that could fire the superintendent. That idea failed to gain sufficient aldermanic support.

Lightfoot also walked back her competing oversight proposal, giving the final body more authority to set Chicago police policies than she would have liked. But ultimately, the proposed ordinance retains the mayor’s ability to veto such decisions.

Despite some concessions by the mayor and activists, the head of the Chicago Police Department’s Fraternal Order of Police blasted the plan as “absolutely absurd and dangerous and reckless” and said it hands oversight to “the squeaky wheels who made this city into anarchy last summer.”

Far Northwest Side Ald. Anthony Napolitano, 41st, a former police officer, said accountability should be directed to “all our communities,” in light of 6,700 people shot in the city in the past 18 months.

Napolitano said the initiative “isn’t going to have people come out to talk to (police) any more.” Rather, it will make it harder for police to do their jobs, he said.

And it’s going to make it tougher to recruit new officers, he said.

“This new committee, this 12th layer of police oversight, is going to make every potential police officer think about going in another direction,” Napolitano said.

“I don’t oppose reform. I just don’t think this ordinance is the way to handle it,” he said.

Speaking in favor of the ordinance, Ald. Jason Ervin, 28th, chair of the council Black Caucus, said the debate shows the different experiences with police in struggling Black neighborhoods compared to elsewhere in Chicago.

“Kids in my neighborhoods’ first interaction with police should not be on the hood of the car,” Ervin said. “It should be in a community setting. And we need proper people working, community involvement. Because sometimes we need to understand this, that the Police Department may not see it in that way. It is up to us as policy makers to let them know that, hey, this is where we need to move.”

North Side Ald. Harry Osterman, 48th, a co-sponsor, said it can help establish trust between Chicagoans and police because residents will have a hand in crafting policy.

“We, as a city, cannot have safety, true safety, in every neighborhood unless there is trust between citizens and police,” Osterman said.

Lightfoot made a case for the compromise plan before the vote Wednesday. She noted that she prosecuted both gang members and corrupt police officers as a federal prosecutor, and that she was head of former Mayor Richard M. Daley’s Office of Professional Standards, and former Mayor Rahm Emanuel’s police accountability task force that called for civilian oversight.

“This ordinance, should it pass, will not solve all problems. It will not make every challenge that we face on public safety and accountability go away,” she said. “There is much more work to be done.”

Sam Walker, a national police accountability expert, called the design for the new commission “very strong,” saying it has an orderly and clearly defined way to involve the community.

Walker also noted that it sets up a way for the community to have say-so in policy decisions, such as around mental health or domestic violence responses by officers. He said this is a critical piece that stands to improve how all officers engage with the public, which is as important as disciplining officers.

“Generally I am a major advocate of external agencies doing policy work, of reviewing, making proposals. … That is the best way towards improving policing,” he said, drawing a distinction between policy change and disciplining officers. “Civilian complaint review boards review individual complaints. So you find an officer used excessive force and you suspend him for 30 days. (But) you haven’t changed the department.”

As for complaints that Chicago has too many oversight boards, Walker, who testified at city council committee hearing on civilian oversight, said that is not an excuse to forgo a strong community-based board that has direct input, especially in an era where trust in policing is so lacking.

“In that climate, it’s extremely important and valuable to create a process where concerns can be translated into policy recommendations and then translated into change,” said Walker, professor emeritus of criminal justice at the University of Nebraska at Omaha. “It just couldn’t be more important.”

The process for staffing two tiers of proposed civilian panels created by the ordinance is complicated.

While elections would be held to name members to 22 district council across the city, those bodies would be largely advisory. A seven-member Community Commission for Public Safety and Accountability would have slightly more power, and the mayor would retain a great deal of the authority to decide who gets to serve on that body.

At the outset, Lightfoot would get to select the members of an interim commission from among 14 nominees chosen by the City Council Rules Committee. The president of the commission would be paid $15,000 per year, and the other six members would get $12,000.

In 2023, elections would be held in each of the city’s 22 police districts, to name three-member councils in each district. Those panelists would get $500 per month.

Each district council would name a member to serve on a nominating committee, which would submit the names of nominees to the mayor to fill the seven-member Community Commission.

The mayor would be free to accept the nominees or reject them. The nominating committee would then keep submitting nominees until the mayor accepted enough people to serve on the commission.

So if Lightfoot or any subsequent mayor worried a nominee would operate as too much of a free agent on the commission, she could simply decline to name that person to the panel.

The commission would also be able to vote to remove the police superintendent, but the mayor could accept or reject that recommendation.

The commission could adopt new Police Department policies, but the mayor could veto those rules. A two-thirds vote of the 50-member City Council would be needed to override the mayoral policy veto.

The ordinance itself needed two-thirds majority, or 34 votes, to pass the 50-member council Wednesday rather than a simple majority, because it sets regular citywide elections to let voters pick members of district police oversight councils.

A 17-year-old Chicago boy was held without bail Saturday after being charged as an adult in the fatal beating of a Vietnam War veteran during a carjacking earlier this week in Hyde Park.

In addition to reckless homicide, the 17-year-old driver, whose name wasn’t released because of his age, received several traffic citations.

The dead included victims were from Missouri, Illinois and Arkansas.

One of the intruders was fatally shot and a resident was wounded as the men scuffled over the intruders’ guns, police said. The two were among 17 shooting victims in Chicago from 5 p.m. Tuesday into Wednesday, police said.

Three men are dead, and at least 14 other victims were injured in city shootings since Friday afternoon including an attack were four people were shot in the Austin neighborhood shortly before midnight Saturday, Chicago police said.

Indiana prosecutors have charged four juveniles from southeastern Illinois with allegedly torturing and poaching more than 20 wild deer in the two states.

Rapper suffered as many as 64 bullet wounds across the street from Cook County Jail just after being released, police say

This was not the first time such a seemingly orchestrated attack occurred outside the Cook County Jail or its neighboring courthouse. 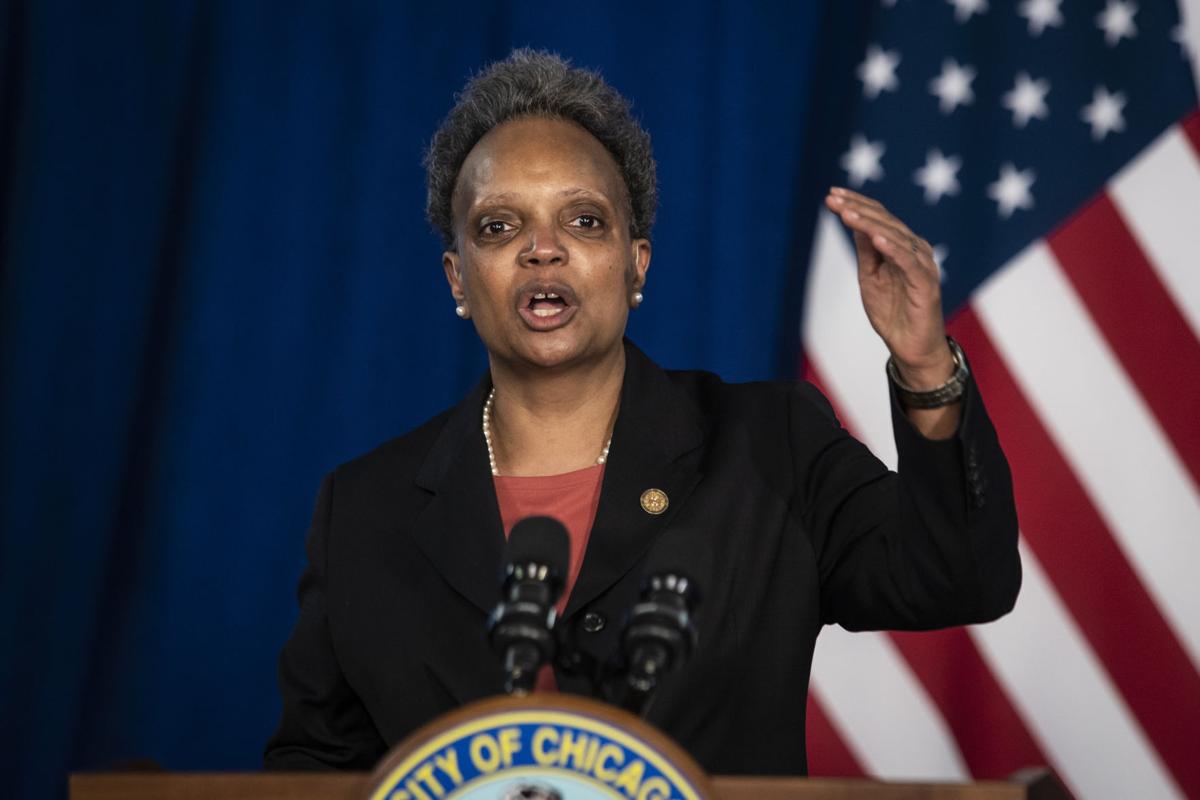 In this Thursday, April 15, 2021, file photo, Mayor Lori Lightfoot discusses the videos of 13-year-old Adam Toledo, who was fatally shot by a Chicago police officer, during a news conference at City Hall in Chicago. 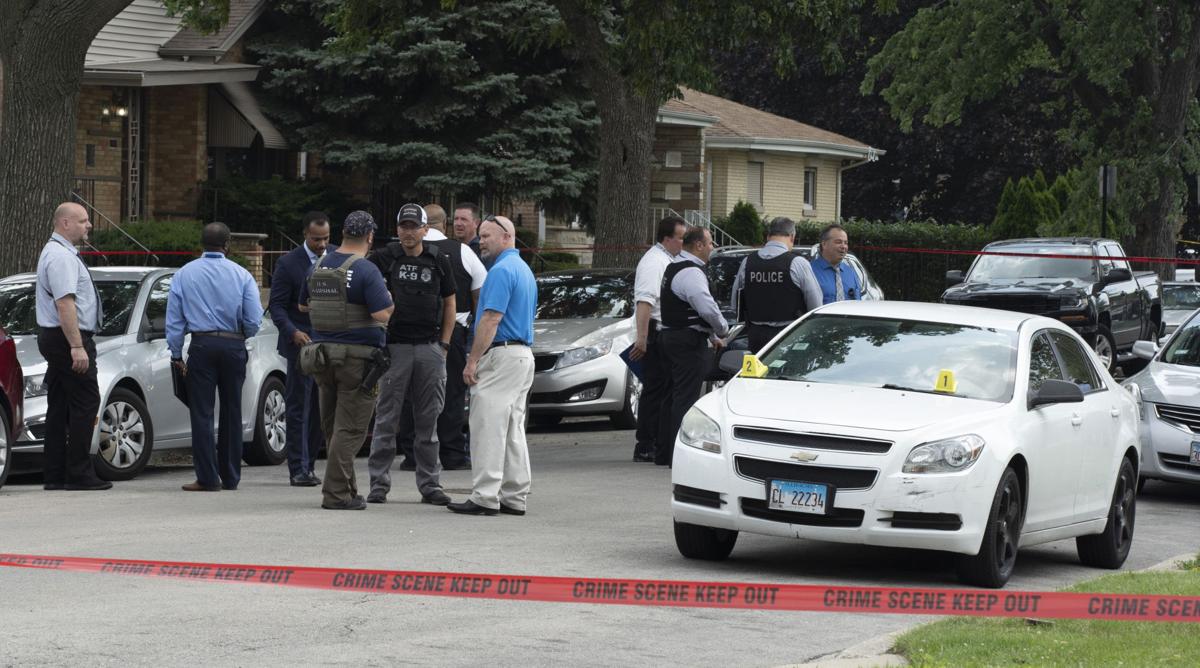 Chicago Police work on a crime scene in a residential neighborhood, Wednesday, June 7, 2021.