Watch now: Without 217 area code, your call will not be completed as dialed starting Saturday 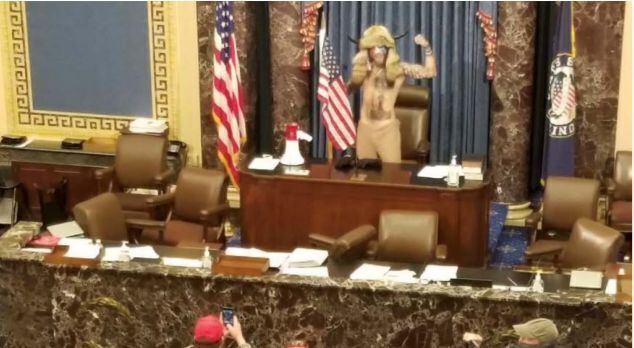 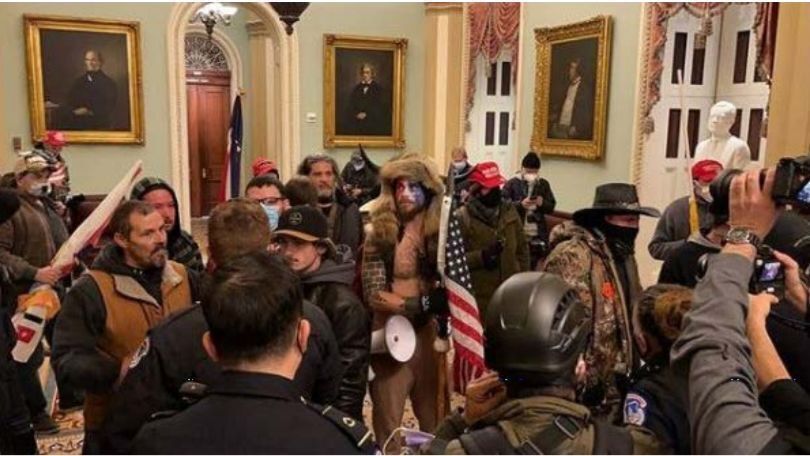 Capitol riot suspect Jacob Chansley, known as the "Qanon shaman," is asking for a pardon from President Trump, saying he believed Trump had invited him to enter the Capitol, says his attorney.

My client "felt he was answering the call of our President," says Albert Watkins. pic.twitter.com/iccAp5sRDO

ST. LOUIS — A St. Louis-based lawyer for one of the men charged with participating in the U.S. Capitol riot last week says President Donald Trump should pardon his client because he was following Trump’s instructions.

Lawyer Albert Watkins said in an interview Thursday that Trump invited Jacob A. Chansley and other supporters of the president to walk down Pennsylvania Avenue to the Capitol on Jan. 6. “He invited his faithful, those who had been longstanding supporters of him and his cause, those who felt for the first time in their lives that their political voices were being heard,” the lawyer said. “He’s the president. He can go wherever he wants with those that he invites.”

Watkins said Chansley, also known as the Q Shaman, did not participate in violent attacks that led to the death of a Capitol Police officer and injuries to other officers. A protester was also fatally shot. Chansley has appeared often at past pro-Trump rallies.

Watkins said Chansley was unarmed, nonviolent and did not hide his identity. He also did not break through any barricades, doors or windows, as others did, the lawyer said. “He just walked in with the whole crowd that was walking in on the peaceful side of things.”

Watkins said many Capitol police officers were supportive of the protesters, who gathered by the thousands to condemn presidential election results that they falsely believed included widespread fraud and voting irregularities. President-elect Joe Biden defeated Trump and will take the oath of office next Wednesday.

Chansley was indicted by a federal grand jury this week on six counts, including violent entry and disorderly conduct on Capitol grounds.

Charging documents say Chansley was spotted in the hallways and standing on the dais inside the Senate chamber. He was wearing horns, a bearskin headdress and red, white and blue face paint, and was holding a six-foot spear with an American flag tied just below the blade.

In a statement, Watkins said, “His attire was consistent with his long-held Shaman beliefs.”

The day after the riot, Chansley, who also goes by Jake Angeli, called the Washington field office of the FBI and admitted being in the Capitol. He said “that he came as a part of a group effort, with other ‘patriots’ from Arizona, at the request of the president that all ‘patriots’ come to D.C. on Jan. 6, 2021,” the charging documents say.

Chansley turned himself in and will cooperate with the government, Watkins said.

Asked whether Chansley adheres to the widely discredited and false QAnon conspiracy theory about widespread voting fraud, Watkins said, “I think he was open to the suggestion that the election was rigged and forces were out to get Trump and he believed Trump’s statements that this was like Valley Forge all over again.”

“Christ, you’ve got a president who has been rabble-rousing for six or seven months,” Watkins said.

In a detention motion filed Thursday, prosecutors said Chansley was one of the first rioters in the building, disobeyed a Capitol police officer’s order to leave and instead went to the Senate floor, where he sat in a seat vacated by Vice President Mike Pence just minutes before.

Chansley then wrote Pence a note saying, “it’s only a matter of time, justice is coming,” prosecutors said.

Chansley, who is unemployed and a regular user of psychedelic drugs, including mushrooms and peyote, also has mental health issues, they said.

“Chansley has spoken openly about his belief that he is an alien, a higher being, and he is here on Earth to ascend to another reality,” the motion says. Chansley has advocated hanging “traitors” in the U.S. government.

The attack on the Capitol led the House on Wednesday to impeach Trump for “incitement of insurrection.”

Chansley, who recently tested positive for COVID-19, is being held in quarantine in a federal facility in Phoenix after surrendering, Watkins said.

“Given the peaceful and compliant fashion in which Mr. Chansley comported himself, it would be appropriate and honorable for the president to pardon Mr. Chansley and other like-minded, peaceful individuals who accepted the president’s invitation with honorable intentions,” Watkins said.

Watkins is a veteran of controversial and high-profile cases and has occasionally been criticized for his public statements connected to them. He initially represented Mark and Patricia McCloskey, who waved guns at protesters outside their Central West End home in June.

His representation of the husband of the woman with whom former Gov. Eric Greitens had an affair led to the outing of the relationship, and eventually Greitens’ downfall.

He once claimed babies had been stolen from St. Louis’ historic Black Homer G. Phillips Hospital and sold, before separate investigations by the FBI and the Post-Dispatch refuted the claim.

More arrests made after riots at the U.S. Capitol

Sheriff: No evidence of impairment in Woods crash

Sheriff: No evidence of impairment in Woods crash

Samuel L. Johnson, 55, died Friday as he awaited trial in the stabbing deaths of hairdresser Michael Cooney and two of his clients, 79-year-old Doris Fischer and 82-year-old Dorothy Bone on March 2, 2005.

The owner of three suburban Chicago restaurants who is criminally charged with secretly filming up the skirts of female employees may have used a camera in his shoe to make nearly 2,000 videos, attorneys said this week.

All five who suffered injuries from the gunfire were transported to HSHS St. John's Hospital. One of the victims, Carlos Dozier, 22, Decatur, was pronounced dead at 3:02 a.m. by emergency room staff.

Since it was founded in 2001, the Illinois Innocence Project has helped exonerate or release 18 clients who were wrongfully convicted of crimes.

Murder suspect caught in Effingham is back in St. Louis

Ronald Marr, 34, is scheduled for a detention hearing Wednesday on charges that he killed a former girlfriend and her two young daughters.

Joseph R. Hannon of Sycamore admitted to sexually assaulting six children between April and September 2016. Each was younger than 13 years. They were students at Energym, a Sycamore gymnastics school.

A woman whose brother was fatally shot during last summer's unrest in suburban Chicago filed a federal lawsuit Tuesday alleging that two paramedics allowed a photo to be taken of the dying man, and that a retired fire department lieutenant posted it on Facebook along with a disparaging caption.

The 7th U.S. Circuit Court of Appeals ruling wipes out a jury's decision that found the city had repeatedly failed to identify Officer Patrick Kelly as a problem before he shot his friend in the head after a night of drinking.

An Army special forces sergeant pleaded not guilty Friday to murder and other charges in the killing of three people and wounding of three others during a mass shooting at an Illinois bowling alley.

VIDEO: Jussie Smollett back in court on new charges

VIDEO: Jussie Smollett back in court on new charges