CHICAGO — As Illinois prepares to legalize marijuana next year, one key aspect of public health that regulators will consider is whether and how to limit the amount of THC -- the chief component of cannabis that determines how high users get.

The new law signed by Gov. J.B. Pritzker last month to legalize sales Jan. 1 states that the Department of Agriculture will oversee cannabis growers, including "establishing limits on potency or serving size."

While the vast majority of adult marijuana users consume it without incident, advocates say, the link between THC potency and psychosis has generated increased concern recently among psychiatrists and researchers. Multiple studies have shown a persistent association between marijuana use and psychosis, including schizophrenia, with symptoms such as paranoia and hallucinations.

In March, a study in the British medical journal Lancet went further, and found that daily cannabis use was associated with increased first episodes of a psychotic disorder. The association was even more pronounced for stronger marijuana, with higher levels of THC. A 2018 study in the Netherlands also found that when potency went up, more people sought drug treatment, and when potency fell, so did the number of patients.

The data fit many of the tests for causality, researchers say, but doesn't prove that cannabis causes psychosis. Some researchers suspect instead that people predisposed to psychosis may be more likely to use cannabis. But as the Yale University authors of a comprehensive research review put it, "... cannabis may be a component cause in the emergence of psychosis, and this warrants serious consideration from the point of view of public health policy."

Illinois' first capital is an island that's home to just 18 people. Recent flooding has made it even more isolated.

RANDOLPH COUNTY, Illinois — On Kaskaskia Island, from the levee holding back the rushing waters of the Mississippi River to the north, to the …

In response to such findings, the Illinois State Medical Society is calling for per-serving limits on THC, strong warning labels, and a ban on claims of health benefits from cannabis. The society was involved in getting public health precautions written into marijuana legalization, and members hope to be involved in drawing up further regulations.

Medical Society President Paul Pedersen said he's heard from psychiatrists in the state that there has been a noticeable increase of youths coming into emergency departments with acute psychosis from marijuana in the past few years. He supported THC limits, saying, "It would be better to err on the side of being conservative."

Marijuana potency -- measured by the percentage of THC by weight in the total amount of marijuana consumed -- has risen in recent decades. The average strength of stronger strains of confiscated pot doubled from about 8 percent in the early 1990s to 16% by 2013, according to the National Institute on Drug Abuse.

Efforts have been made to limit THC in other states. In Florida this spring, lawmakers tried but failed to limit the strength of marijuana flower to 10% THC. In Colorado in 2016, advocates pushed for a referendum to limit THC to 16%, but ultimately withdrew the plan. Medical marijuana laws in some states only allow low-THC products.

Industry officials argued that the limits would have eliminated most of their products, and would only push demand to the black market, costing jobs and tax revenue.

The Illinois medical marijuana program, operating since 2015, simply limits the amount of THC in edibles, so that a candy bar contains a maximum of 100 milligrams of THC, and is scored into servings of 10 milligrams each.

Cannabis continues to get stronger since legalization. Colorado reported that the average amount of THC in legal marijuana flower there rose from about 16% in 2014 to 20% in 2017.

The products generating the most concern are concentrates -- in which solvents are used to extract THC into waxlike substances -- which are far stronger, and can exceed 80% THC.

In Massachusetts, which recently legalized cannabis, a group of doctors and scientists recently called for strict THC potency limits and warnings on packages to include "increased risk of serious mental illness including psychosis, paranoia, suicidal thoughts, and depression." The group also advocates tracking marijuana transactions to limit how much someone may buy.

But trying to regulate THC percentage is misguided, in the view of Jeremy Unruh, director of public and regulatory affairs for PharmaCann, a multistate cannabis business based in Chicago.

People who use high-THC concentrates are generally experienced users, he said. Smokers feel the effects within minutes, so if it's stronger pot, they simply smoke less. Most overdoses of cannabis, he believes, are due to new users who eat too much.

In states with legal cannabis, such as Colorado, emergency room visits and hospitalizations linked to marijuana use have shot up, often because people try an edible, then eat too much when it doesn't take immediate effect, leading to an overdose -- as famously documented firsthand by New York Times columnist Maureen Dowd.

Many weed-related websites offer advice on how to handle a "freak out," noting that most users will be fine with time, and generally advising to try to relax in a safe place and wait it out, which may take hours or even all day or night.

It's more important, in Unruh's view, to set limits on each serving of edibles, so that users know how much they're taking and start with small amounts until they know what dose is best for them.

"I think it would be counterproductive to limit (THC) potencies until we really know (the effects)," he said. "I think it's dosing -- that addresses the issue."

Cannabis advocates also point out that despite increased use of the product, the incidence of schizophrenia has remained about the same, at less than 1%.

Paul Armentano, deputy director for the advocacy group NORML, acknowledged in an email that marijuana use carries risk particularly for young people and those with a family history of mental illness, which is why the group supports age restrictions and public education.

Such awareness campaigns have helped steadily decrease use, particularly among adolescents, of tobacco and alcohol, which unlike marijuana, kill thousands of people each year. And legal cannabis has the advantage of lab testing and potency statements on the label, unlike illegal pot. Armentano also pointed out that the FDA-approved drug Marinol, used to quell nausea, is 100 percent synthetic THC, but is used safely, without the risk of fatal overdose that opioids have.

Dr. Shalini Varma, a psychiatrist and addiction counselor in Vernon Hills, said she has seen patients who were heavy marijuana users who suffered psychotic breaks, such as a patient thinking the television is talking to him, or that his eyes are filming other people.

"They can't function," she said. But many of her patients won't admit it's a problem. "I treat lots of different drug problems. More than any other drug, they hold onto this."

As for the regulatory process, a spokeswoman for the Department of Agriculture could not say what limits the agency will set, but said the emergency rules will be ready, as required, within 180 days of the law's signing -- a deadline which is just days before legal sales are to begin.

SPRINGFIELD — Democratic Gov. J.B. Pritzker signed into law one of the most liberal reproductive health care measures in the country last mont…

Cannabis will be legal Jan. 1. How will Illinois employers handle the change?

DECATUR — With less than six months to go before recreational cannabis is legal in Illinois, employers are trying to cut through the haze abou…

OTTAWA, Ill. — Defense attorney Eric Miskell represented numerous drug dealers over the years, and by his account he was good at his job. He k…

Immigration and Customs Enforcement used facial recognition to scan driver's license photos in some states. Illinois says it has turned down requests.

CHICAGO — U.S. Immigration and Customs Enforcement, or ICE, has used facial recognition technology to comb through millions of driver's licens…

SHELBYVILLE — Police are investigating the death of a Shelbyville woman and have arrested a 24-year-old man following a multi-county chase, au… 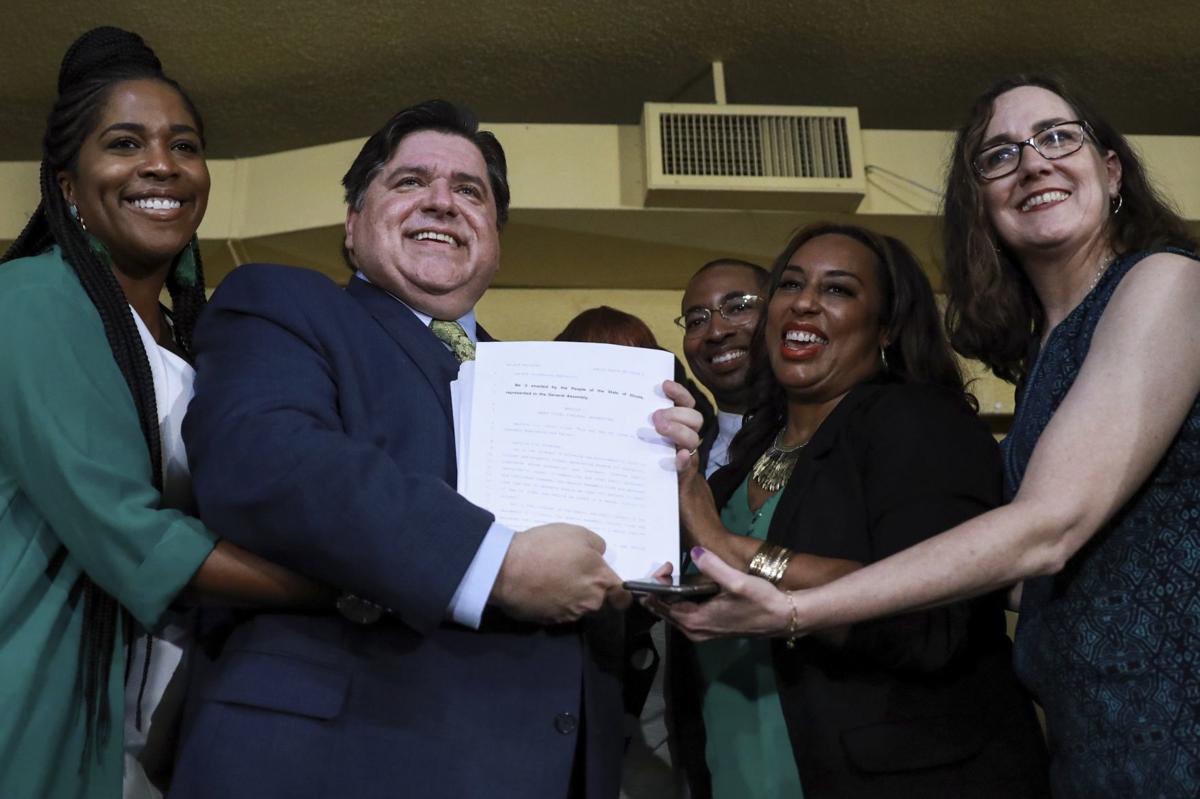 Gov. J.B. Pritzker holds a bill that legalizes adult-use cannabis in the state of Illinois on June 25 at Sankofa Cultural Arts and Business Center in Chicago. 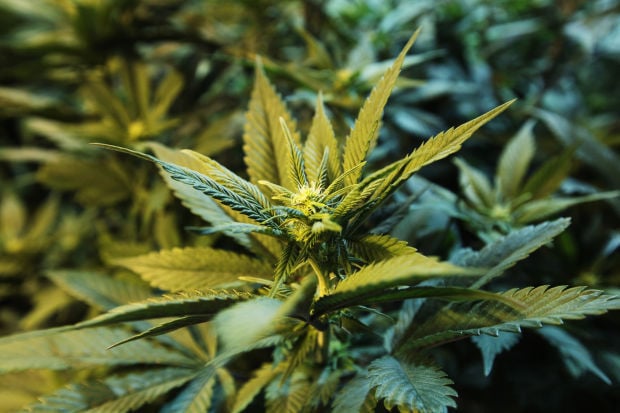