COVID-19 has wrecked Illinois state finances even more. How bad will it get?
1 comment
Share this
Return to homepage ×

SPRINGFIELD — The state of Illinois, like most states, began a new fiscal year on Wednesday and the person in charge of managing the state’s bank accounts said she fears it could be one of the most difficult years in modern memory.

“This is going to be, I think, by far perhaps the most challenging year that I've had to manage as comptroller,” state Comptroller Susana Mendoza said in an interview Wednesday. “And that's saying something because, you know, I had to navigate the state through what was, when I took office, the worst fiscal crisis that our state had ever experienced, that two-year budget impasse.”

The difference between then and now, she said, was that during the budget impasse, the state still had revenues flowing in, just no legal authority to spend it. But in the face of the COVID-19 pandemic, and the near shutdown of the state’s economy that it forced, Illinois now isn’t seeing anything close to the revenues it will need to fund the new budget.

“You can pass whatever budget you want,” she said. “If the revenues don't come in the way you'd like them to, then there's not enough money to go around for all of the priorities that are represented by that budget. So, at the end of the day, we'll have to see month-to-month what our revenues look like. It's so completely up in the air.”

The financial impact of the pandemic started to appear in state revenues in April and May. Before then, Mendoza noted, Illinois was in relatively good shape with a nominally balanced budget in place and revenues coming in greater than expected. The state was even making progress on paying down its backlog of past-due bills.

But that all changed in April after Gov. J.B. Pritzker extended the tax filing deadline to July 15, which took a big bite out of revenues the state normally would have seen that month. Meanwhile, the state’s unemployment rate shot up to an unprecedented 17.2 percent in April as employers throughout Illinois were forced to shut down or scale back operations due to the novel coronavirus.

As of Wednesday, according to the comptroller’s website, the bill backlog stood at $5.4 billion. But Mendoza said that figure doesn’t tell the whole story because in order to keep the state running, it borrowed roughly $2.7 billion.

That included $1.2 billion from the Federal Reserve, just part of the $5 billion in Fed borrowing that state lawmakers authorized during their special session in May. It also included another $1.5 billion in interfund borrowing and borrowing from idle funds in the state treasurer’s office.

“So that did help me to pay down some really important bills that needed to be paid of that bill backlog, but it's important to remember that, okay, the bill backlog says it's $5.4 billion, but in actuality, we're still on the hook for paying back that $2.7 billion, so we're really looking at, you know, 5.4 plus 2.7,” or $8.1 billion, she said.

Among the high-priority bills the state paid, she said, were invoices from Medicaid providers, including hospitals, which were already reeling from revenue losses that resulted when they were forced to call off nonemergency surgeries and procedures in order to free up resources for COVID-19 patients.

The $1.2 billion in federal borrowing came through a program called the Municipal Liquidity Facility, which the Federal Reserve Board authorized in March to help states and large municipalities deal with the dramatic falloff in revenue they were seeing. Illinois is paying 3.8 percent interest on the loan, which is due to be paid back by June 30, 2021.

However, the plan for paying back that money, and any more the state may need to borrow this fiscal year, hinges on the idea that Congress will pass another economic relief package that will include significant relief for states — something it has not done yet and is still the subject of partisan wrangling on Capitol Hill.

Mendoza said there is no way for Illinois to make it through this new fiscal year without making draconian budget cuts if Congress doesn’t come through with that aid.

“Because Illinois is not the only one who's looking at this type of financial disaster situation, but every single state in the country is going to require federal government sending financial aid,” Mendoza said. “And when I say financial aid, I don't mean loans. I mean specifically grants — money that does not have a million strings attached to it that would go specifically to help make up for lost revenues due to COVID-19.”

Republicans in Congress, however, have been reluctant to accept what they see as a “bailout” of state governments, many of which, including Illinois, had significant financial challenges before the pandemic.

In April, U.S. Senate Majority Leader Mitch McConnell, R-Kentucky, suggested that some states would be better off filing for bankruptcy. Amid significant backlash, McConnell walked that idea back a few days later and suggested a direct aid package — but only if it included civil immunity from COVID-19-related lawsuits for employers, which Democrats have not been willing to accept.

Mendoza called the idea that Illinois and other states were asking for bailouts “laughable,” while noting that Illinois receives less in federal benefits from Washington than it pays into it. McConnell’s home state of Kentucky, meanwhile, receives more than $2 in benefits for every dollar it sends to Washington.

Mendoza said that when it comes to paying bills on a month-to-month basis, her office will prioritize making scheduled debt payments, paying out retirement benefits and making payments to public schools. Beyond that, she said, everything else in state government will be at risk without federal aid.

“We are far from done with this pandemic, so if anybody believes that we're even remotely out of the woods yet, they're imagining things,” she said. “We really have yet to see what the month to month reduction in revenues is going to be. We can try to predict them, but this is uncharted territory.”

The local Prairie Farms Dairy operation will end production and lay off 62 employees in the coming weeks as it moves to a distribution-only facility, the organization said in filings made to state and local governments Wednesday.

An update from the Decatur city manager, Scot Wrighton. Watch the video.

Forty horses are crowded around Lenora Calzavara, their breath hot and their tails swishing.

Should you get a coronavirus antibody test? Here's what health experts say.

If you or someone you know had a weird cold earlier in the year, you might wonder if it could have been coronavirus.

Areas from about Rushville southeast through Shelbyville will be "the most favored areas for such funnels this afternoon," the weather service said.

The U.S. Department of Labor said Thursday there were 676,338 people in Illinois receiving continuing unemployment benefits during the week that ended June 27. That was 29,511 fewer than the previous week.

A federal judge on Thursday denied the Illinois Republican Party’s request to temporarily block Gov. J.B. Pritzker’s ban on gatherings of more than 50 people from applying to political gatherings.

The Shelby County Health Department in a statement on Thursday the 53-year-old woman works at a "long-term care facility in an adjoining county."

All of Gov. J.B. Pritzker’s executive orders since April 8 pertaining to the novel coronavirus pandemic are void because he exceeded his authority when he used his emergency powers for more than 30 days, a Clay County judge ruled Thursday.

Two motorists were hospitalized with serious injuries Thursday after a head-on crash in Coles County.

Chicago health officials said Friday they have no plan for enforcing the city’s abrupt quarantine order for people arriving from states where coronavirus cases are surging, but will rely largely on signs posted along highways and at the two airports. 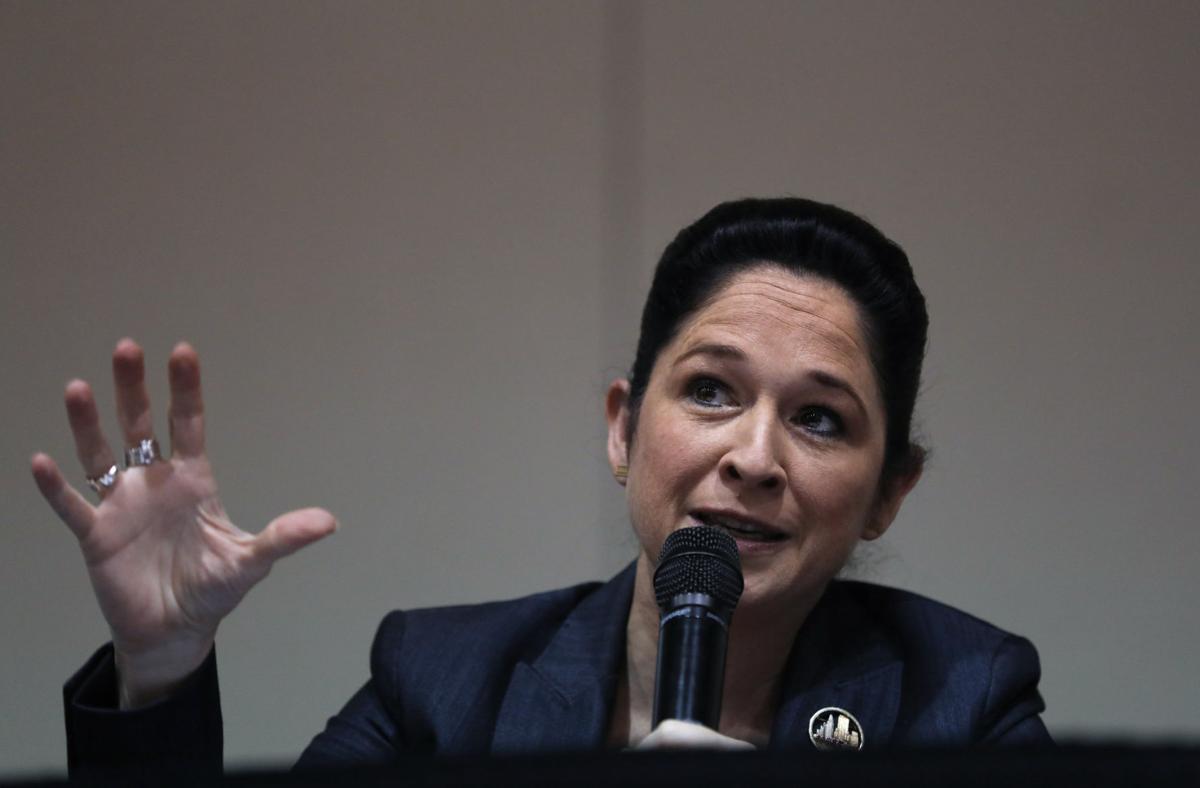 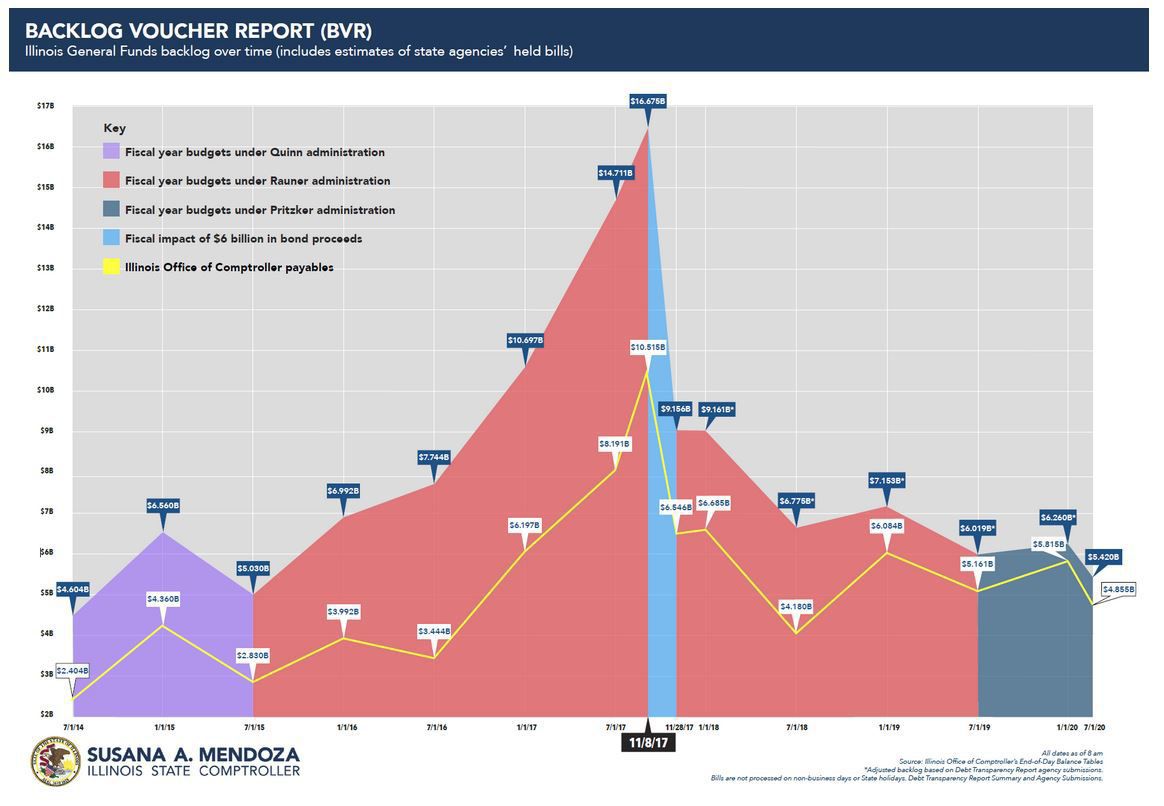