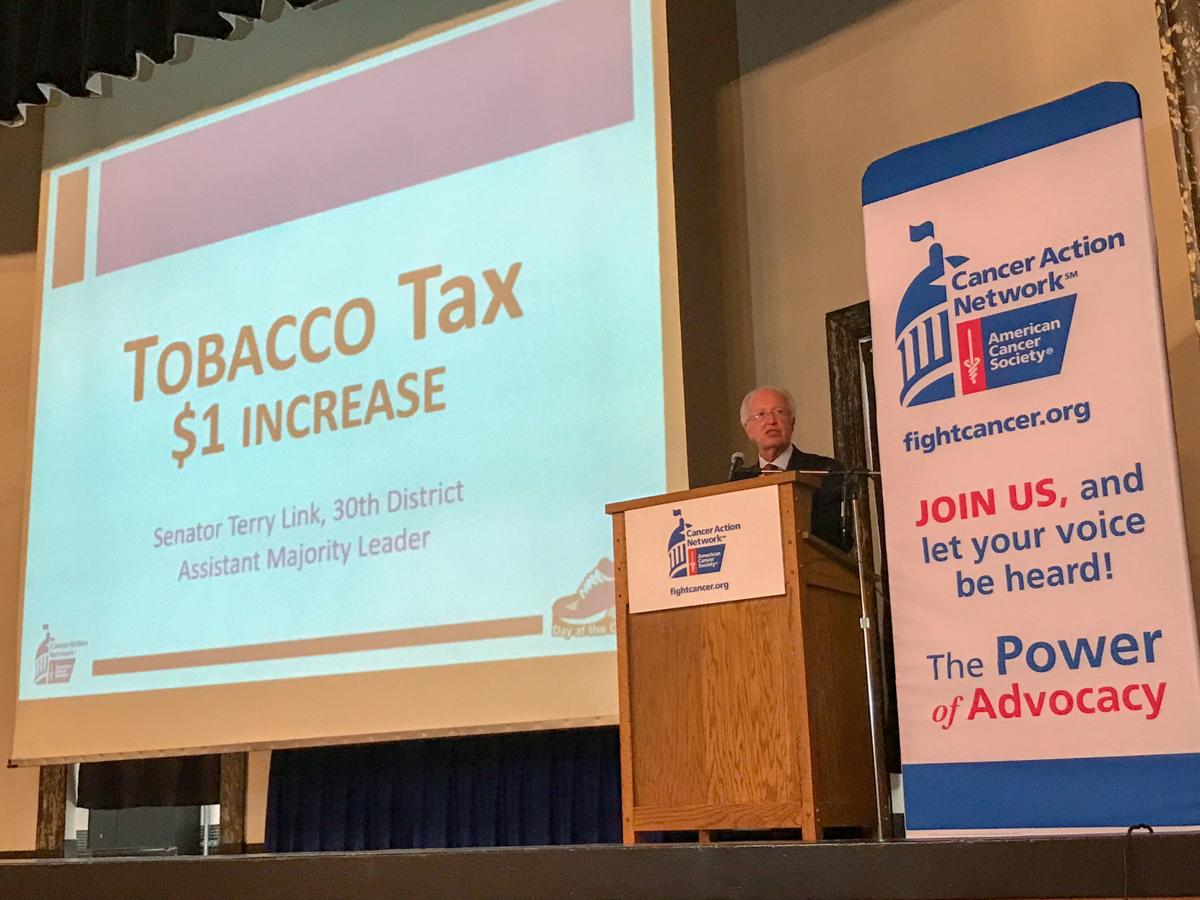 State Sen. Terry Link, D-Vernon Hills, speaks at an event in Springfield in May. 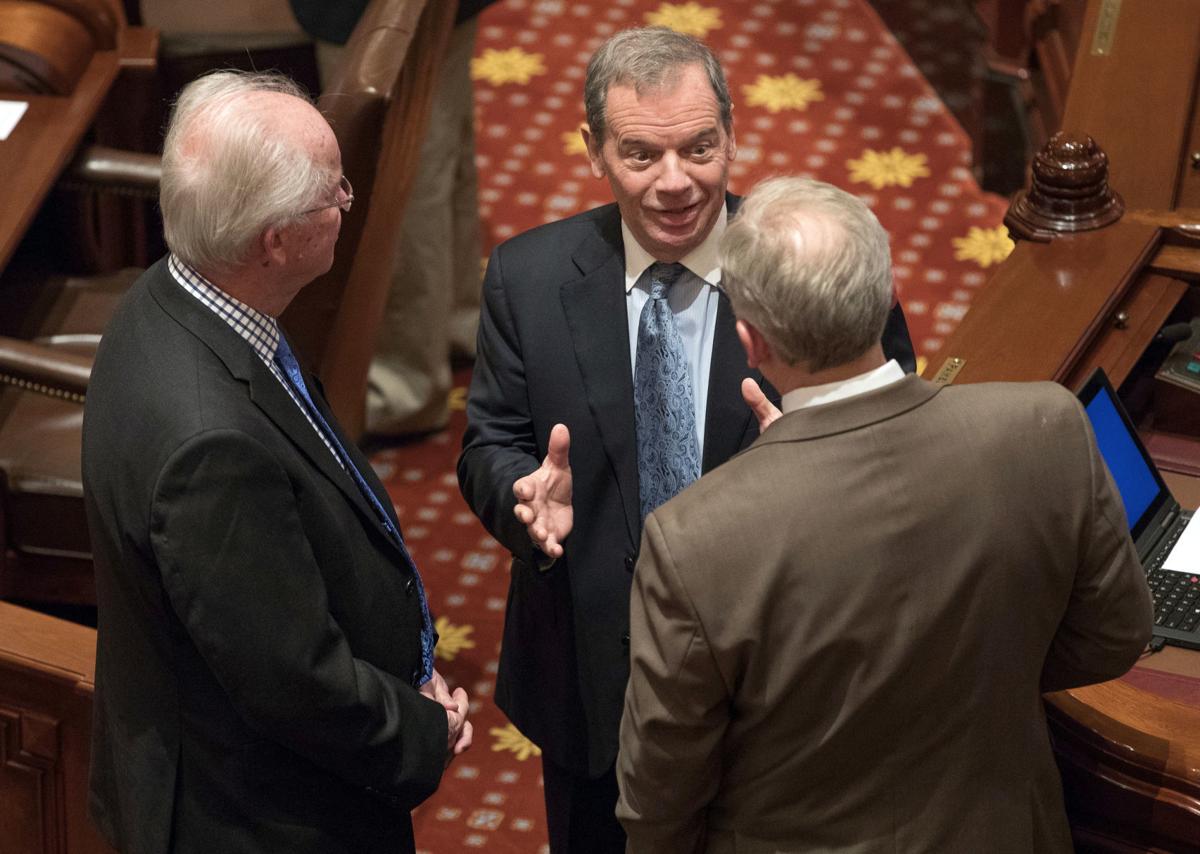 A Democratic state senator embroiled in a federal government corruption investigation failed to report a $50,000 profit from the sale of a Florida condominium as required on his state ethics form, the Chicago Tribune has found.

The 2016 real estate transaction involved veteran Lake County Sen. Terry Link, identified by a source as the unnamed senator who wore a wire on a fellow lawmaker. The recording, made in August, captured what authorities said was a bribery offer that led to criminal charges against then-state Rep. Luis Arroyo of Chicago.

Link, who has denied being the unnamed senator, ended up cooperating with the FBI after authorities discovered evidence that showed he’d cheated on his taxes, prosecutors have said in court filings. A source said Link’s undisclosed condo sale isn’t what spurred their investigation into his finances.

The buyer of Link’s Florida condo? The mother-in-law of a man who sources say is under investigation in the federal probe of state Sen. Martin Sandoval and SafeSpeed, the red-light camera company. Link said that tie is a coincidence.

On the same day Link sold his condo, he bought a larger unit in Florida, taking a personal loan from a Northbrook mortgage broker who was a campaign donor, because Link could not qualify for a conventional mortgage at the time, the broker told the Tribune.

State law requires elected officials to disclose when they make more than $5,000 from selling any asset. The fourth question on the form asks officials to “List the identity (including the address or legal description of any real estate) of any capital asset from which a capital gain of $5,000 or more was realized during the preceding calendar year.”

Link offered the same response to that question as he did to the form’s other questions: “N/A," short for “not applicable.”

Asked recently about the ethics form omission, Link at first said he didn’t need to report the profit because he had immediately used the money to buy a bigger Florida condo and had not owed any taxes on the transaction.

Ethics experts, however, said federal capital gains taxation is irrelevant to the state requirement for officials to disclose such deals.

After consulting with the Senate Democratic ethics officer, Link later told the Tribune he would be amending his statement of economic interests that covers 2016 to include the real estate deal.

“I’m glad you brought it to my attention,” Link said. “To me, it was something I never intended to skirt the issue.”

Being found guilty of such an ethics violation would likely at most carry a fine. That pales in comparison to Link’s situation with federal authorities, who said in the Arroyo criminal complaint that the senator “expects to be charged with an offense relating to his false income tax returns" in 2016.

Sometime that year, Link became an FBI source in an ongoing probe of public corruption in Illinois, according to a court filing and a source. Federal authorities have not said how he came to be a source.

The FBI said it subsequently discovered in November 2016 that Link had filed a false income tax return, upping the stakes for his undercover cooperation as authorities said he sought a deal to lessen the punishment he may face.

Link’s condo deal has a connection to the sprawling federal probe.

The buyer of Link’s two-bedroom Fort Myers home, Catherine Lofrano of Mokena, is the mother-in-law of Joseph Colucci. He’s a south suburban real businessman under scrutiny in the investigation of Sen. Sandoval and SafeSpeed, according to sources.

Link said the condo sale to Colucci’s mother-in-law is merely a coincidence. He said he does not know Colucci, and that Lofrano bought the condo after meeting Link’s wife by the condo complex’s pool while the woman and her husband were vacationing there as renters.

Given the connection to another branch of the investigation, Link said, “I could see where you would look at that, but I don’t know them.”

Lofrano confirmed Link’s description of the condo sale, saying she struck up a conversation with Susan McCall Link one day at the pool.

“I don’t know him,” Lofrano said of Terry Link. “I didn’t even know he was a state senator.”

Lofrano said her son-in-law had no role in her purchase of Link’s condo, which is in a complex heavily populated with Chicago-area owners, according to Link and Florida land records.

The Links bought the condominium in 2003 for $99,300, according to Florida land records. They sold it to Lofrano for $150,000 in June 2016 in a private sale. The sale price was in line with listed and estimated prices of similar homes in the same complex, according to online realty listings.

Joseph Colucci, Lofrano’s son-in-law, is a real estate and mortgage broker who also owns a bar in Tinley Park where he has a pending application for a video gambling license with the Illinois Gaming Board.

However, it’s his dealings with SafeSpeed that have placed Joseph Colucci under federal scrutiny, sources told the Tribune. His stepfather, Dennis Colucci, was a sales representative for the company, and before he died in January 2018, the elder Colucci handed his share of business in several west suburbs to stepsons Joseph and James, sources said.

Dennis Colucci was an associate of infamous Outfit hit man Harry Aleman. When Aleman was tried in 1977 for the murder of union organizer William Logan, Colucci was one of the hit man’s alibi witnesses, the Tribune reported at the time. Colucci testified that Aleman was hitting golf balls with him and two other men at a Melrose Park driving range the night Logan was shot and killed in 1972.

Aleman initially was found not guilty in a bench trial, but was retried after the judge in the case was revealed to have accepted a bribe to clear him. Aleman eventually was convicted of the murder and spent the rest of his life in prison.

The same day Link sold his condo to the Lofranos, he bought a new, larger condo across town in Fort Myers. To do so, Link borrowed $146,400 in a personal loan from David Hochberg, a veteran mortgage broker known for advertising his various companies through radio and television.

The loan to Link was made via Hocks Inc., a company registered to Hochberg’s Northbrook home. Hochberg declined to elaborate on the terms of the loan, but said he understood why Link’s financial dealings were under scrutiny. “I understand Terry is under a lot of heat right now, I get it," he said.

Link refinanced the loan two years later through Perl Mortgage, where Hochberg was an executive.

“It was a private loan. It’s my private business and that’s really all I want to say about it,” Hochberg said. “I don’t want to get dragged into” an FBI investigation.

A day later, a Hochberg spokeswoman called to offer more information. Hochberg made the loan, which was interest-only, because Link could not qualify for a conventional loan, said spokeswoman Lissa Druss.

Link’s condo deal happened during the time that then-Comptroller Leslie Munger had suspended state lawmakers’ pay during a lengthy budget impasse in Springfield. As a result, Link did not have recent pay stubs to demonstrate he had the income to afford the loan payments, Druss said.

Rather than turn Link down for the loan, Hochberg lent the money himself, she said.

Unlike many state lawmakers who have law practices or other business income for financial support, his ethics disclosure forms indicate Link relies on his legislative pay of around $88,500 a year as his principal source of income.

Hochberg said he met Link in his capacity as a board member of a mortgage broker’s trade organization. At the time, he was living in Link’s Senate district and the organization asked its members to contact their lawmakers to protest a proposed bill they believed was bad for the mortgage industry. Hochberg also contributed about $2,000 to Link’s campaign fund.

WHAT CAN I BUY?

DO I NEED TO BRING MY STATE ID OR DRIVER’S LICENSE?

HOW MUCH CAN I BUY?

HOW DO I PAY FOR IT?

WILL I BE ABLE TO SEE THE PRODUCT BEFORE I BUY IT?

WILL I HAVE TO WAIT IN LINE?

CAN I SMOKE AS SOON AS I LEAVE THE STORE?

WHERE IS THE WEED GROWN?

Pritzker instructs agency leaders to prepare for cuts of 5-10%

State agency heads are preparing to cut 5% of their budgets — and 10% next fiscal year — if the federal government fails to provide aid to state and local governments, Gov. J.B. Pritzker said.

The debate over the resumption of high school sports came as infection rates appeared to be declining in most parts of Illinois.

Jobless workers could get an extra $300 a week in benefits. Pritzker says Illinois is applying for Trump’s benefits program.

State Sen. Terry Link, a Democrat from Indian Creek, had been a key player in passing gaming legislation in Illinois, including a massive 2019 expansion bill.

The Democratic chairman and ranking Republican on a special legislative committee investigating House Speaker Michael Madigan both said Tuesday that they are awaiting further guidance from federal prosecutors about how far they can go in questioning witnesses and calling for documents.

Illinois lawmakers are free to pursue their own investigation into House Speaker Michael Madigan’s role in a bribery scheme involving utility giant Commonwealth Edison, as long as they don’t specifically ask witnesses what information they’ve shared with federal investigators or a federal grand jury.

Illinois child welfare officials told a panel of lawmakers that the COVID-19 pandemic has hindered but not completely prevented efforts to monitor children at risk of abuse or neglect.

Amid a flurry of complaints that the marijuana licensing process is broken, Gov. J.B. Pritzker’s office announced Wednesday that his team will… 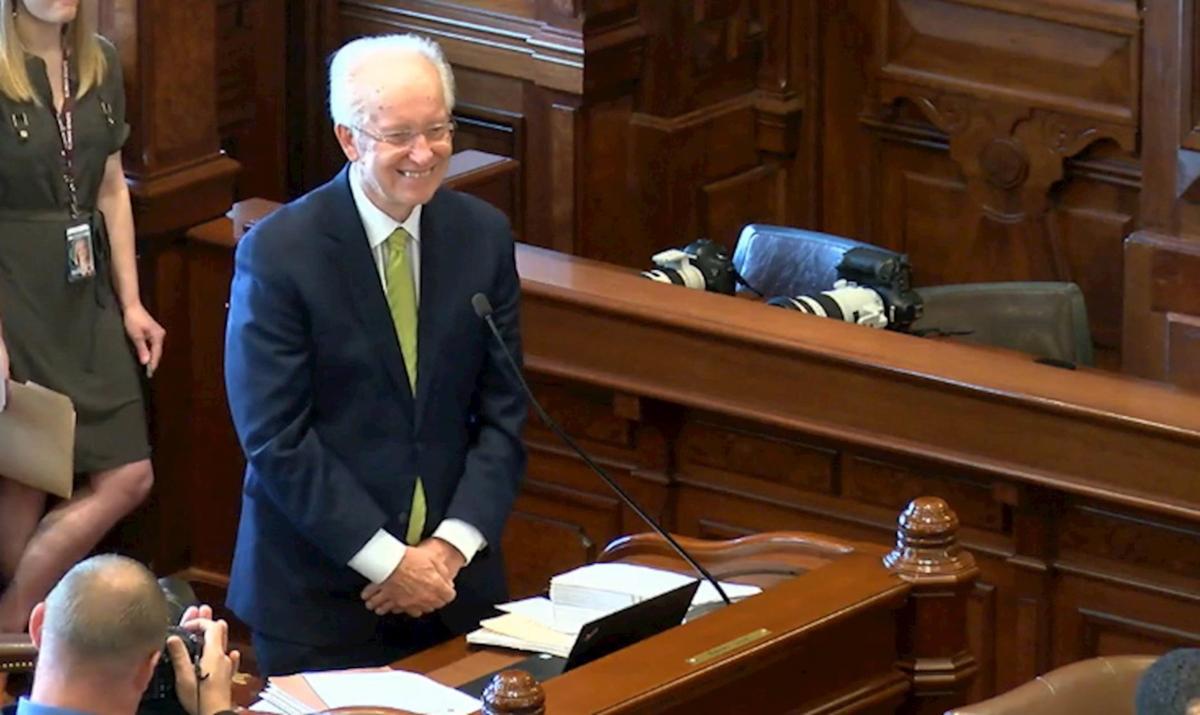 State Sen. Terry Link, D-Indian Hills, smiles as the gambling expansion bill he has sought to pass for years was approved in June by the Senate at the Capitol in Springfield.

State Sen. Terry Link, D-Vernon Hills, speaks at an event in Springfield in May. 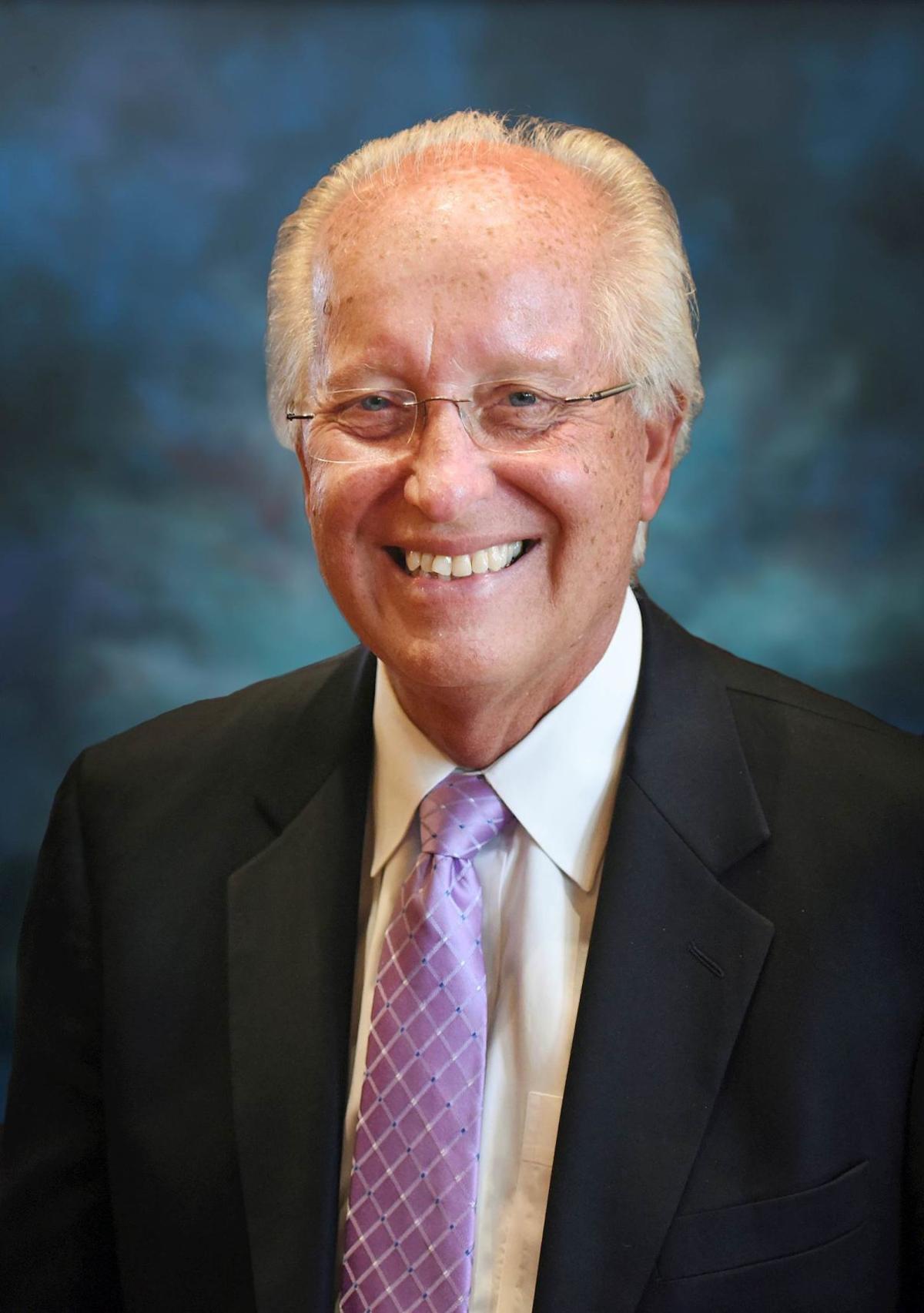