Senate Minority Leader Dan McConchie, of Hawthorn Woods, and House Minority Leader Jim Durkin, of Western Springs, filed the suit in U.S. District Court in Chicago, arguing that the maps are based on survey data rather than official U.S. Census numbers and therefore violate the U.S. Constitution’s “one person, one vote” requirement.

“Today’s filing should come as no surprise to Illinoisans,” Durkin said in a news release. “The partisan process upon which the legislative maps were drawn flies in the face of strong recommendations made by countless advocacy groups and citizens who testified at the redistricting hearings.”

Durkin was referring to groups who urged lawmakers to wait for the release of official data from the 2020 census, which is due for release in mid-August. That, however, would have pushed lawmakers beyond the Illinois Constitution’s deadline of June 30 for the General Assembly to adopt maps before the process is turned over to a bipartisan commission. 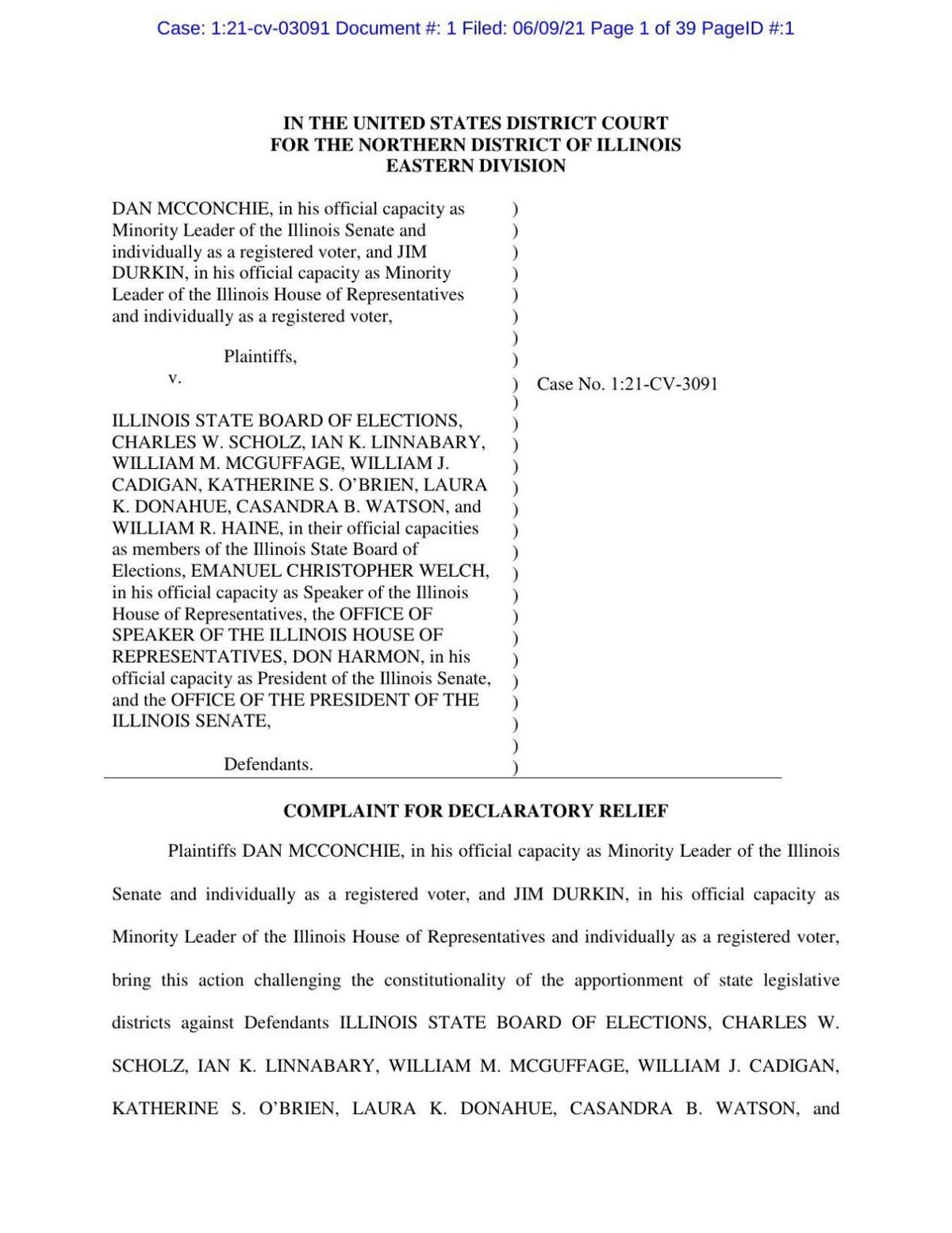 So instead, House and Senate Democrats based the new maps on population estimates derived from the Census Bureau’s American Community Survey, which Republicans and a number of voting rights advocacy groups, including the League of Women Voters of Illinois and Illinois Common Cause, argued is not accurate enough to be used for redistricting.

Democratic leaders also said they used data from previous elections to determine the partisan tilt of each district.

Throughout the process, Republicans pushed unsuccessfully for the appointment of an independent redistricting commission that would have been fashioned along the lines of one that was proposed in a 2016 constitutional amendment, but which the Illinois Supreme Court removed from the ballot that year under a legal technicality.

“Today we are entering court on behalf of the thousands of families, small business owners, workers, and taxpayers who said they wanted an independently drawn map, not the one handed down by political insiders desperately clinging to power,” McConchie said in the news release. “We believe this is our best option to advocate for the 75 percent of voters who were refused an independent process and a map created with accurate data.”

During the spring legislative session, House and Senate redistricting committees held a series of more than 50 public hearings focusing on different areas of the state. Most of those hearings, however, were either virtual meetings or hybrid meetings with in-person and virtual participation.

The House and Senate approved new maps on Friday, May 26, less than 24 hours after the final drafts had been introduced. Pritzker signed them into law a week later, on June 4.

The lawsuit alleges that the maps violate the equal protection clause of the 14th amendment to the U.S. Constitution, which federal courts have frequently cited as the basis for requiring state legislative districts to be drawn so they are substantially equal in population.

That has generally meant that districts cannot vary in population by more than 10 percent between the largest and smallest districts, but variations of less than 10 percent have also been found unconstitutional if the lines are drawn in an arbitrary or discriminatory manner.

McConchie and Durkin argue in their lawsuit that the use of survey data to craft the new maps resulted in districts that are both arbitrary in how they were drawn and discriminatory because the surveys that were used tend to undercount certain subgroups of the population.

They are asking the court to declare that the new maps violate the U.S. Constitution and for an injunction to prevent state officials from implementing the new maps.

The suit names House Speaker Emanuel “Chris” Welch, of Hillside, Senate President Don Harmon, of Oak Park, and the Illinois State Board of Elections, along with its individual members, as defendants.

“It is disappointing but not surprising Republicans would seek to strike down these new maps, which reflect the great racial and geographic diversity of our state. Throughout this process, they have done nothing but delay and obstruct efforts to ensure our communities are fairly represented, as seen by their refusal to even draft their own proposals,” the statement reads.

Rep. Elizabeth Hernandez, D-Cicero, who chairs the House Redistricting Committee, also issued a statement accusing Republicans of trying to block the new maps for their own political gain.

"Republicans in the House have done nothing but attempt to obstruct this citizen-driven process,” she said. “They've staged charades for the media while spending well over $500,000 of taxpayer money out of their redistricting budget, but couldn't even bother to submit their own proposals to be considered."

As of Wednesday afternoon, the case had not yet been assigned to a federal judge.

9 films set or filmed in Illinois (but not Chicago)

Former GOP rep. sues for back pay for himself, all other Illinois lawmakers

A former state lawmaker is suing for salary increases he claims he was entitled to while serving in the Illinois General Assembly for 12 years, even though he voted against those raises as a lawmaker.

With lawmakers set to return to Springfield next week to vote on an energy policy overhaul, an outline of Gov. J.B. Pritzker’s latest plan shows customers would pay nearly $3 more per month on their power bills, in part to fund a multimillion-dollar bailout of nuclear plants owned by the parent of scandal-plagued Commonwealth Edison.