SPRINGFIELD — A task force formed to study ways to reduce property tax burden on Illinois residents is calling for consolidation of school districts and other local units of government and a boost in the state’s share of funding for K-12 education.

Those and other recommendations are part of a draft report circulated among the 88-member Property Tax Relief Task Force that state lawmakers formed during the 2019 session. A final report is expected to be released before the 2020 legislative session begins Jan. 28.

The bill creating the task force was part of a package of legislation also including a proposed constitutional amendment to allow for a graduated income tax. And while the draft report does not mention the proposed amendment, which will appear on the November general election ballot, Democratic Gov. J.B. Pritzker has said that he wants at least some of the new income tax revenue to be used for property tax relief if voters approve the amendment.

Rising property taxes have been a political flash point in Illinois for many years. The current system dates back to a 1901 Illinois Supreme Court decision that overturned the tax levying method that was used until that time, according to the draft report.

The report notes, however, that property ownership today is no longer the indicator of wealth and ability to pay that it was in the late 19th and early 20th centuries. It also states the current system is full of special exemptions for select groups of property owners — including Tax Increment Financing districts, or TIFs, that have the effect of shifting the tax burden on to other property owners.

The document also notes that local governments in Illinois — school districts in particular — rely more heavily on property tax revenue than in other states. Local property taxes account for two-thirds of all funding for public schools in Illinois, while state funding accounts for only about 26 percent.

“Today’s reliance on property taxes underscores how broken the system of funding local government services has become,” the report states. “Too many units of government rely too heavily on property taxes, which are predicated on the value of something that is most often unrelated to the owners’ ability to pay.”

The report argues the property tax system should be reformed on several levels, including how property values are determined, consolidating townships and other local units of government, and reducing or eliminating some property tax exemptions.

But addressing the issue of education funding would likely have the biggest impact because school taxes make up the bulk of most people’s property tax bills.

Rep. Sam Yingling, D-Grayslake, one of eight co-chairs of the task force, said in an interview that one way to increase the state’s share of school funding would be to expand the state’s sales tax base to cover certain services not currently taxed. He added that also allow the state to reduce its sales tax rate.

The report also notes that one task force member, Chicago Democratic Rep. Mary Flowers, who co-chaired the subcommittee on social and economic disparities, “recommends the removal of school districts from the property tax system so that the State of Illinois has sole funding responsibility for K-12 schools.”

Illinois also has an unusual system of organizing public schools, with 850 individual districts. Of those, more than 300 serve only grades K-8 and nearly 100 serve only high school students. The remainder are known as “unit” districts that serve all grades from K-12.

“Each of these has administrative staff and combining them into unified school districts will result in efficiencies of scale,” the draft report states. “The degree and scope of savings will vary from district to district and from school to school, but in parts of the state, merger will make great financial sense, and without raising concerns about geographic dislocation for students.” 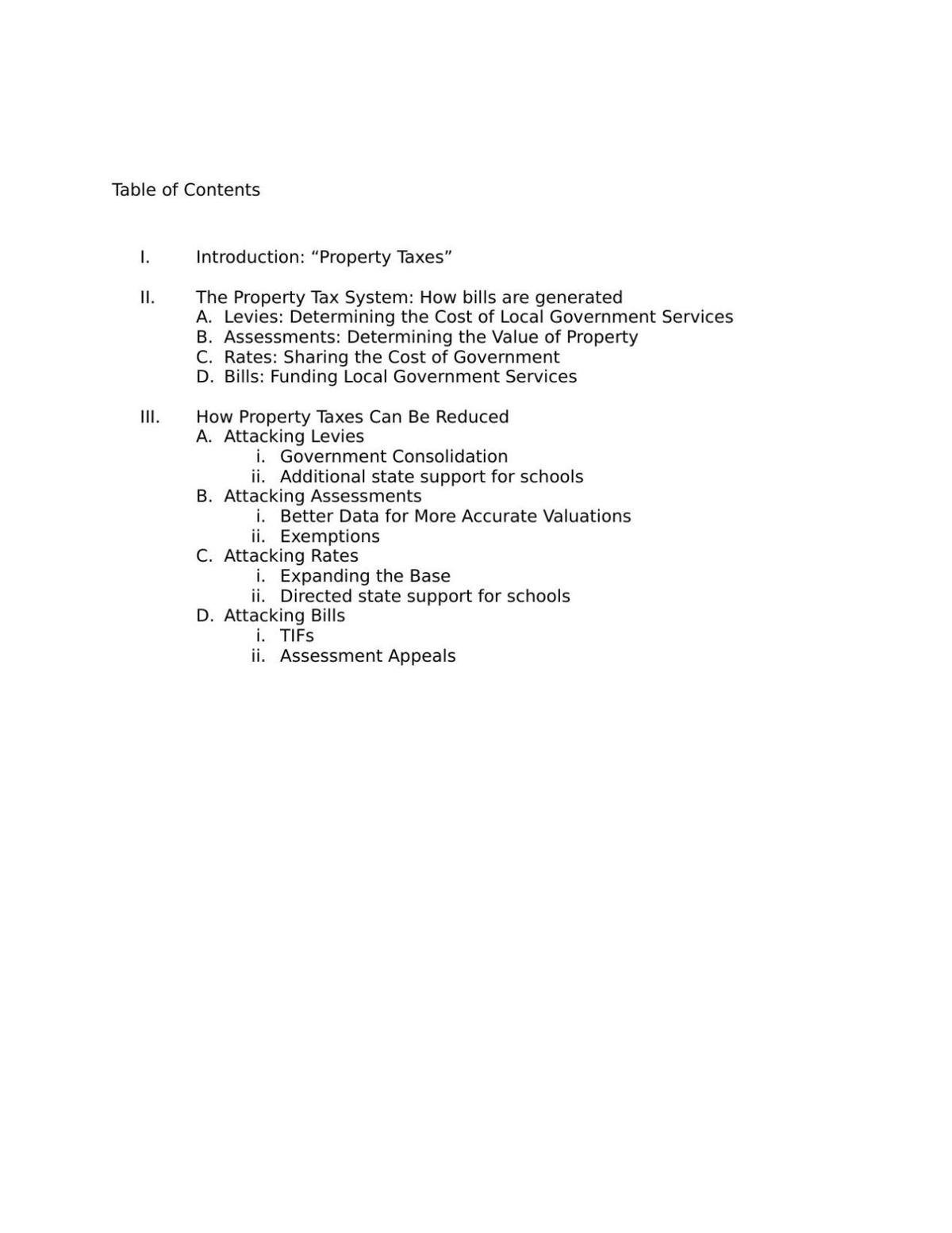 Rep. Stephanie Kifowit, an Oswego Democrat who served as co-chair of the task force’s school funding subcommittee, said in an interview that she agrees with the need for school district consolidation.

“When you talk about school funding and single purpose districts such as K-8 or high school districts, the residents have to know that they are essentially being almost double-taxed versus a unit district,” she said.

By way of example, Kifowit shared a photograph she took of a constituent’s property tax bill. The bill was for a home in Park Forest, a village south of Chicago in Cook County. The home was valued at just over $128,000 and the tax bill was for more than $13,000. That included more than $7,000 levied by two school districts.

The task force was originally supposed to deliver its final report to the governor and General Assembly by Dec. 31, but Yingling said members felt it was important to get feedback on the draft from all four legislative caucuses – Republicans and Democrats in the state House and Senate. He said he expects a final report to be complete before the 2020 session begins Jan. 28.

Once the final report is released, its recommendations will be drafted into legislation for the General Assembly to consider this year.

“It's gonna take longer than one session in one year to fix but I think this is a great first step in the right direction,” Kifowit said. “And I think that we can have a commonsense solution for to really work to lower property taxes for our residents.”

But not everyone on the task force was pleased with the draft report.

“As a current draft, the final report is nothing more than a collection of thoughts with no real recommendations, put together by only a handful of people,” Rep. Joe Sosnowski, R-Rockford, said in a statement. “There was no actual discussion or debate at the committee level on this report. This grossly oversized task force was created in a deal with the Governor to convince reluctant legislators to support an income tax increase being placed on the ballot, apparently to provide them with political cover. Instead of bringing us closer to achieving meaningful and lasting property tax relief for Illinois families, this draft report is a complete disaster that fails to live up to its intended purpose.”

In a first for Illinois, transgender man who gave birth will be listed as the father on his baby’s birth certificate

Although Myles, who is transgender, identifies as masculine, he was the one carrying the baby -- and according to the state of Illinois, that made him the mom.

How workers and employers are navigating legal cannabis in Illinois

Employers that take action against their workers still could face a haze of legal questions. Here are some of the issues.

After a 12-year-old from Illinois died by suicide, his family scoured their home for signs. Then they learned he researched it at school

CHICAGO — In his last school play performance, 12-year-old Gabe Deely played a member of the Lollipop Guild in the “The Wizard of Oz,” waving …

Wonder where the recreational marijuana sold in Illinois comes from? Here’s how it’s grown.

All the marijuana sold in Illinois must be grown in the state, and less than two weeks into legal weed sales, customers are realizing growers’ limits.

CHICAGO — In the span of two weeks, Brookfield Zoo in suburban Chicago has lost both of its African lions, the longtime male-female pair Zenda…

The Piatt County Board chairman has been charged with two felony charges of forgery and two charges of official misconduct.

If you want to see the majestic bald eagle in action, several upcoming festivals might be for you.

‘We finally put a name and a face to this monster.’ Illinois officials ID killer of 16-year-old girl in 1976. Man, now dead, believed to be linked to other cases.

An unsolved string of killings of young suburban Chicago women in the 1970s frustrated police for decades. Now authorities in DuPage County, Ill., believe that by cracking one of those cold cases, they may have uncovered the trail of a serial killer.

With less than two weeks before adult-use recreational marijuana becomes legal in Illinois, the state Department of Agriculture announced Mond…