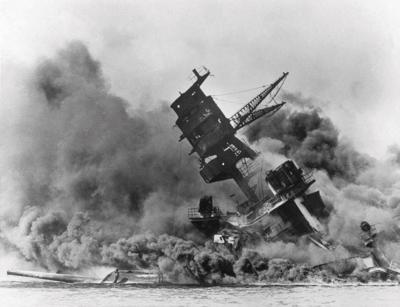 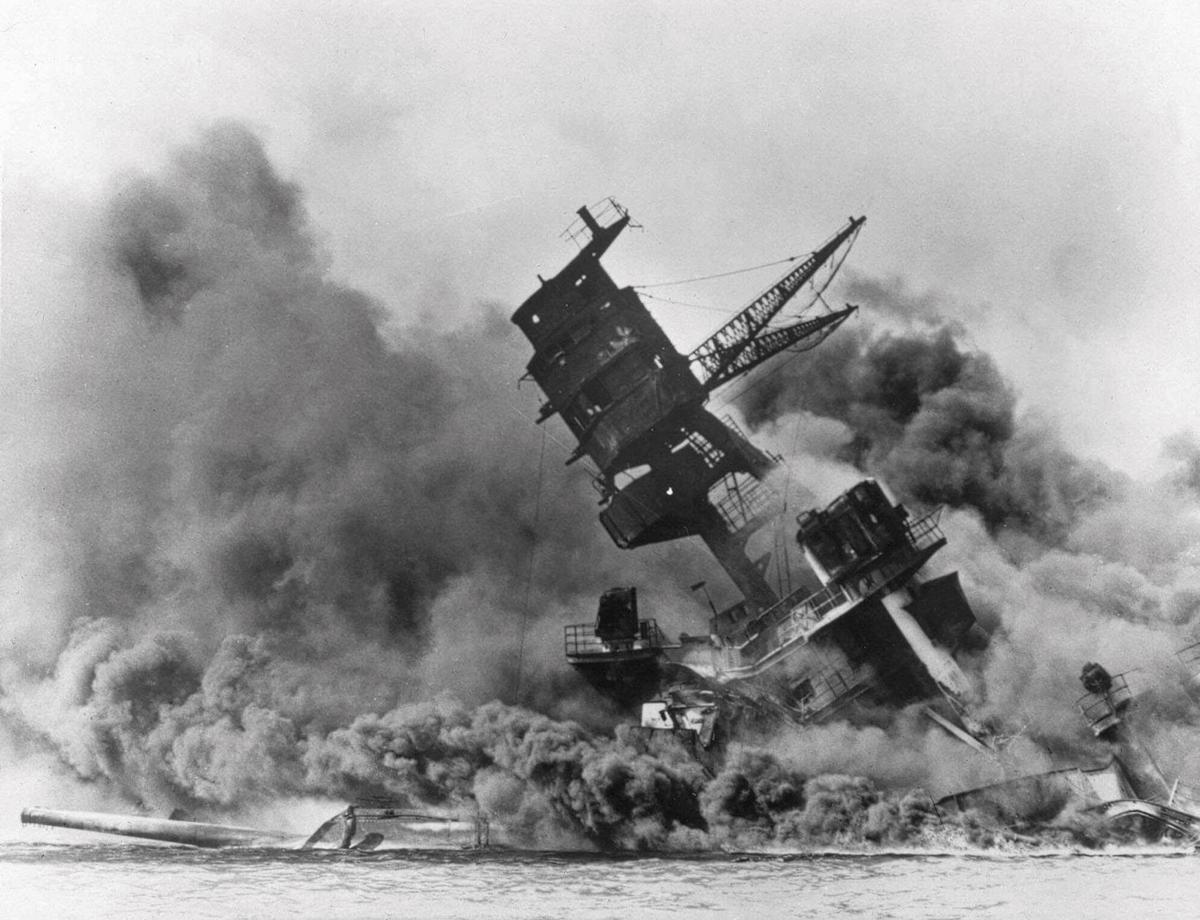 In this Dec. 7, 1941, photo, smoke rises from the battleship USS Arizona as it sinks during a Japanese surprise attack on Pearl Harbor, Hawaii. 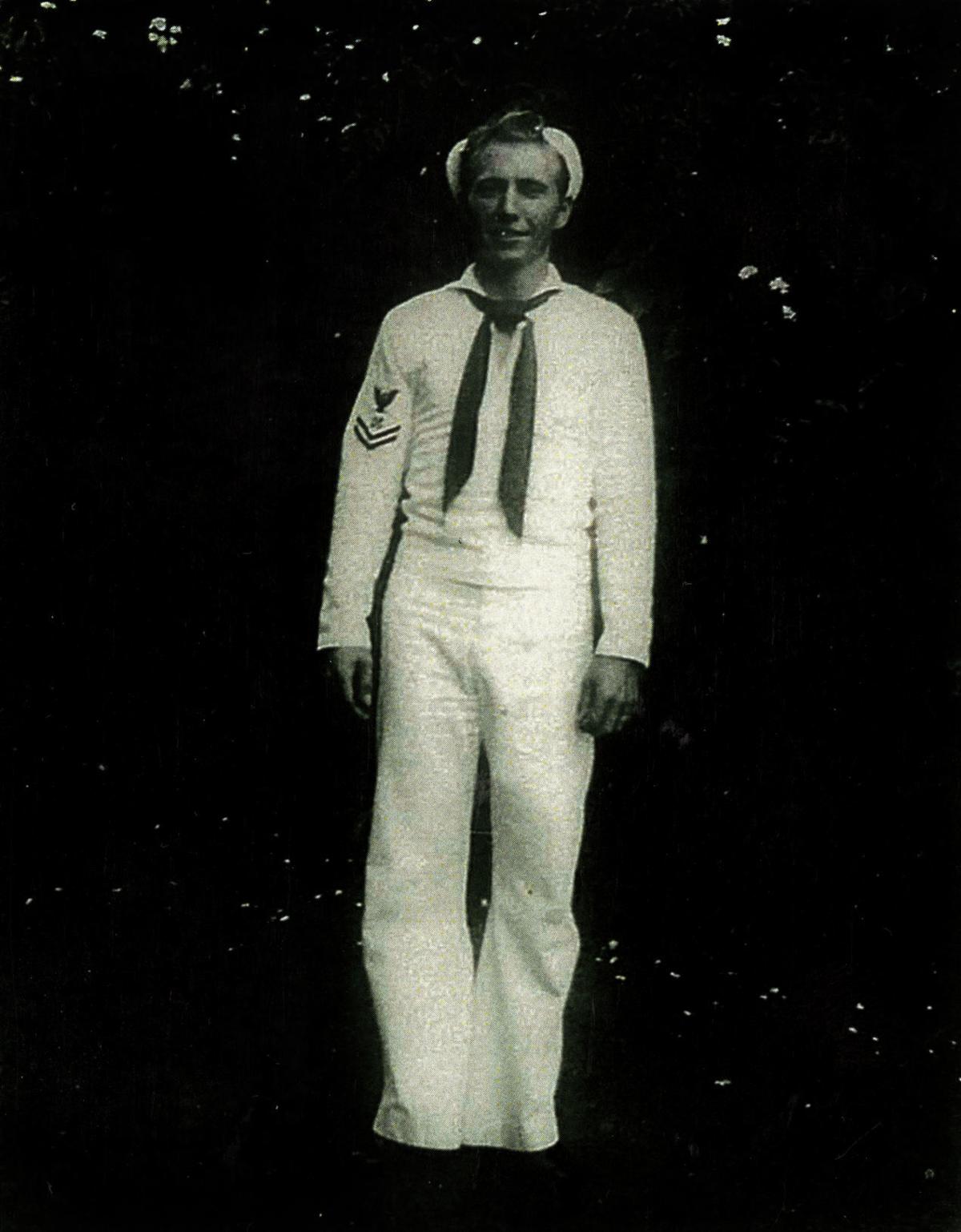 Ken Potts, a native of Honey Bend, was 18 when he enlisted in the U.S. Navy. He is one of only three remaining survivors of the USS Arizona that was attacked on Dec. 7, 1941, at Pearl Harbor.

Born and raised in tiny Honey Bend, Potts — like other teens on the brink of manhood — found few career opportunities as the Great Depression continued to squeeze America. So, when he turned 18, he enlisted in the U.S. Navy. The move seemed sensible: not only did the service mean steady work, but the United States seemed unwilling to poke its nose into growing political unrest in Europe.

Potts found his naval assignment to his liking, as a coxswain stationed aboard the USS Arizona at Pearl Harbor, amid sunny skies and a picturesque ocean.

But, that serenity — as well as the Arizona — suddenly exploded the morning of Dec. 7, 1941. The Japanese sneak attack took 2,403 American lives, nearly half of them — 1,177 sailors and Marines — aboard the Arizona, which sunk after a cataclysmic bombing.

Amid the greatest loss of life ever aboard a U.S. warship, just 335 from the Arizona survived, including Potts. Now 98, he is one of only three remaining survivors of the warship. When Potts thinks back to the world-shaking chaos, confusion and clamor — as well as the men he helped save and the bodies he recovered — he remains amazed at how the quickly and brutally hellfire rained down on that terrible morning.

“It was unbelievable how it could happen,” Potts says. “It was turmoil.”

Potts was born in Honey Bend, a hamlet about 40 miles south of Springfield. The town consisted of about a dozen modest dwellings, a one-room schoolhouse, a post office and a general store. For the first 12 years of Potts’ life, his home had no electricity or indoor plumbing. But he remains wistful about a slice of yesteryear that, despite tough times, seemed a lot simpler.

“It’s a different world today, buddy,” Potts says. “There are a lot of things that are nicer now. But (life back then) was more honest. It was a nicer place to live.”

The schoolhouse offered classes through eighth grade. To attend high school, teens had to commute on foot to Litchfield. Potts declined.

But dropping out meant he had to find a job, which were scarce not just in Central Illinois but across the country. Many bread-winners went to great lengths to support a family: Potts’ father worked for a radiator company in Springfield, where he would live in a cheap apartment weekdays and hitchhike back and forth to home on weekends.

Potts considered farming, but the pay was a 50 cents a day, or $9 in today’s dollars. For a while at age 17, he worked a Civilian Conservation Corps project near Congerville, more than 100 miles from home. But all the while, like many other young men, he eyed the only reliable employer: the service.

A military tour or two seemed safe enough, Potts says. Though winds of war were blowing in Europe, America seemed intent on isolationism. Besides, foreign news and politics rarely grabbed the attention of Potts and his pals.

“We weren’t concerned about the war,” he says. “Back in Honey Bend, we didn’t give a damn. No TV, no radio — we didn’t know what was going on.”

He wanted to join the Coast Guard, but its ranks were full. So when Potts turned 18 in 1939, he joined the Navy. In December 1939 — three months after Germany invaded Poland, triggering war in Europe — he sailed from San Pedro, Calif., aboard the USS Arizona, bound for Pearl Harbor. By 1941 at Pearl Harbor, he had been assigned as a crane operator on the Arizona.

“Anything that went onto that ship or came off, I had something to do with,” he says.

Potts spent Dec. 5 and 6 on liberty in nearby Honolulu. He headed back the morning of Dec. 7 during the 7 o’clock hour, returning to the ship with a load of fruit and expecting a quiet Sunday.

Instead, his world exploded.

At 7:55 a.m., a low whine in the air perked the ears of service personnel. From Ford Island in the harbor, a radio man sent out a Morse-code bulletin: “AIR RAID ON PEARL HARBOR X THIS IS NOT A DRILL.”

The first of a swarm of Japanese warplanes — eventually more than 350, in two waves — descended on Pearl Harbor. Explosions roared as bombs and torpedoes dropped from the sky while machine-gun fire strafed ships, with U.S. air-raid sirens screeching throughout the harbor.

Amid the tumult, the crew atop the Arizona scrambled to fire anti-aircraft guns. Meantime, one, two, three bombs struck and stunned the ship, rendering return fire minimal and ineffective.

“We were just dead in the water,” Potts says.

On Battleship Row, Japanese torpedo planes blew holes in the Nevada, Utah, California, Maryland, West Virginia and Oklahoma, the latter of which quickly listed toward one side. As warship fuel poured into the harbor, an inferno erupted.

“The whole place as on fire,” Potts says. “The water was burning because the oil was on fire.”

About 8:09 a.m., 14 minutes into the attack, a fourth bomb hit the Arizona, with devastating finality. Dropped from a high-altitude plane, the armor-piercing bomb blasted through the forward deck, igniting a million pounds of gunpowder and sparking a massive fireball shooting flames 500 feet high.

“When it blew up, people say, it lifted up the Arizona,” Potts says.

By some accounts, the massive ship jumped up as much as 20 feet. Minutes later and mortally wounded, the Arizona began to sink. Below deck, multitudes of sailors and Marines were trapped, accounting for most of the ship's 1,177 fatalities.

Up top, Potts and others abandoned ship in transport craft. Sliding through the flaming harbor, Potts and other crewmen pulled men from the water and headed to Ford Island. There, they regrouped as the attack raged 90 hellish minutes.

Later, Potts was assigned with five others with the grim task of pulling bodies from the Arizona. They looked for survivors, but found only bodies.

After the clamor at Pearl Harbor subsided, Potts was assigned to the port director’s office. He delivered classified information to captains of ships, a job he held until he was discharged at the war’s end, in 1945.

Back in the States, he worked for a while in Decatur as a carpenter. Eventually, seeking new surroundings, he headed West. He’d heard Utah offered plenty of jobs, so he stopped there and caught on as a car salesman. He settled in Provo, where he and wife Doris have lived in the same house for 54 years.

The Arizona remains sunken in Pearl Harbor, the final resting place for more than 1,100 of its crew. The USS Arizona Memorial straddles above the sunken hull of the battleship. Reunions of shipmates have grown tiny: two survivors died in the summer, leaving Potts just one of three remaining. Though he has visited the site on previous Dec. 7 anniversaries, leg trouble will keep him home this year.

He otherwise is in good health, and recently renewed his driver's license. He muses about making a long road trip next spring to visit his hometown. Over the decades, Honey Bend has become even smaller. Though a campground there is popular, the community consists of just a few houses and no commerce. Potts has not been back there in decades, but he'd like to take a glimpse come spring.

"If my legs get better by then," he says with a chuckle, "I'm going to get back there."

FROM THE ARCHIVES: How Decatur newspapers covered Pearl Harbor

Saturday marks the anniversary of the attack on Pearl Harbor. Visit herald-review.com to see how the Herald & Review reported on the bombing and the reaction in Central Illinois.

The Illinois Republican Party has tied its fate to President Donald Trump, using Democratic efforts to impeach him in an effort to raise funds…

Want to warm up this weekend — and breathe in a lot of oxygen? Check out the greenhouse at the Schaub Floral Display Center, where the Decatur Park District is holding its eighth annual holiday plant sale.

In this Dec. 7, 1941, photo, smoke rises from the battleship USS Arizona as it sinks during a Japanese surprise attack on Pearl Harbor, Hawaii. 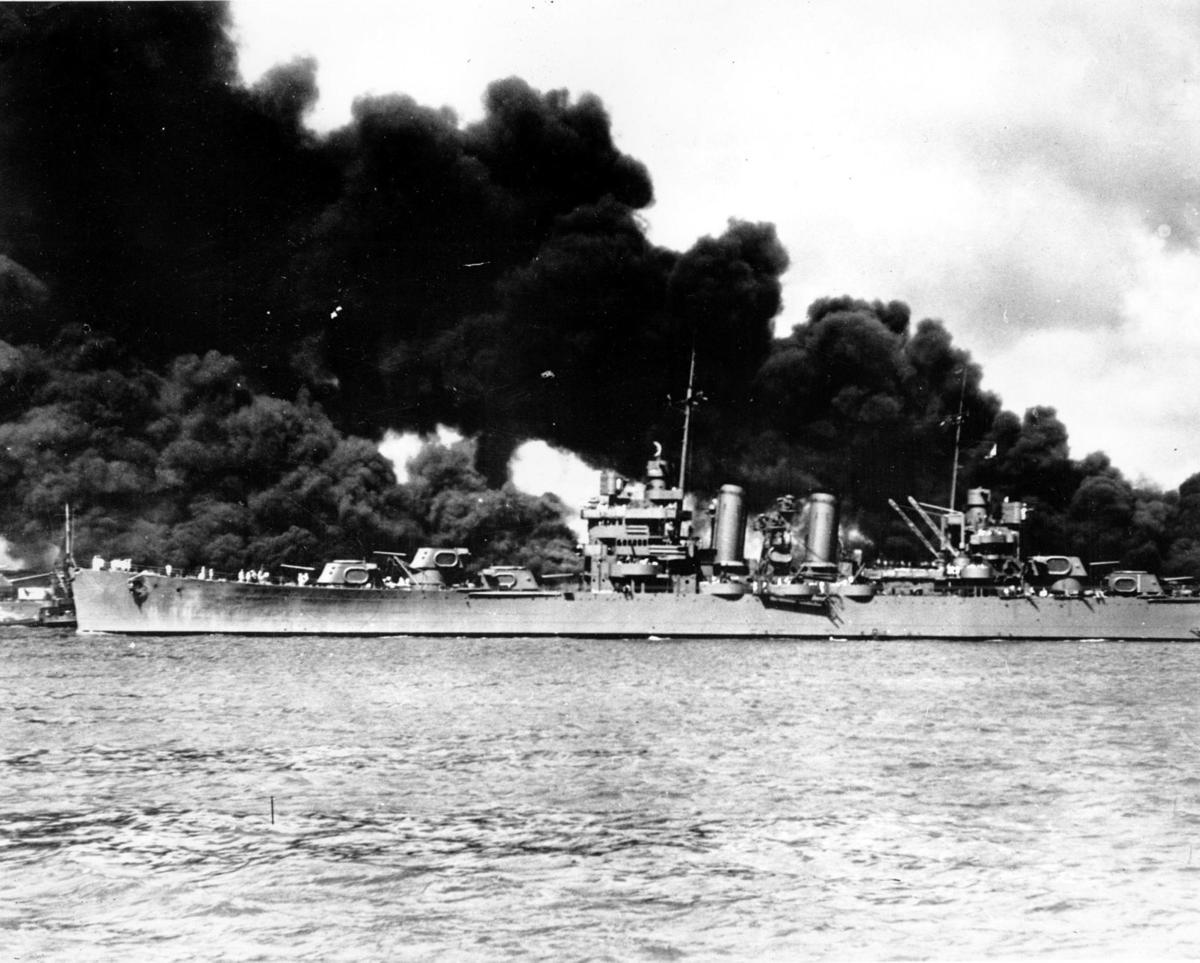 An undamaged light cruiser steams out past the burning USS Arizona and takes to sea with the rest of the fleet during the Japanese aerial attack on Pearl Harbor, Hawaii, on Dec. 7, 1941 during World War II. 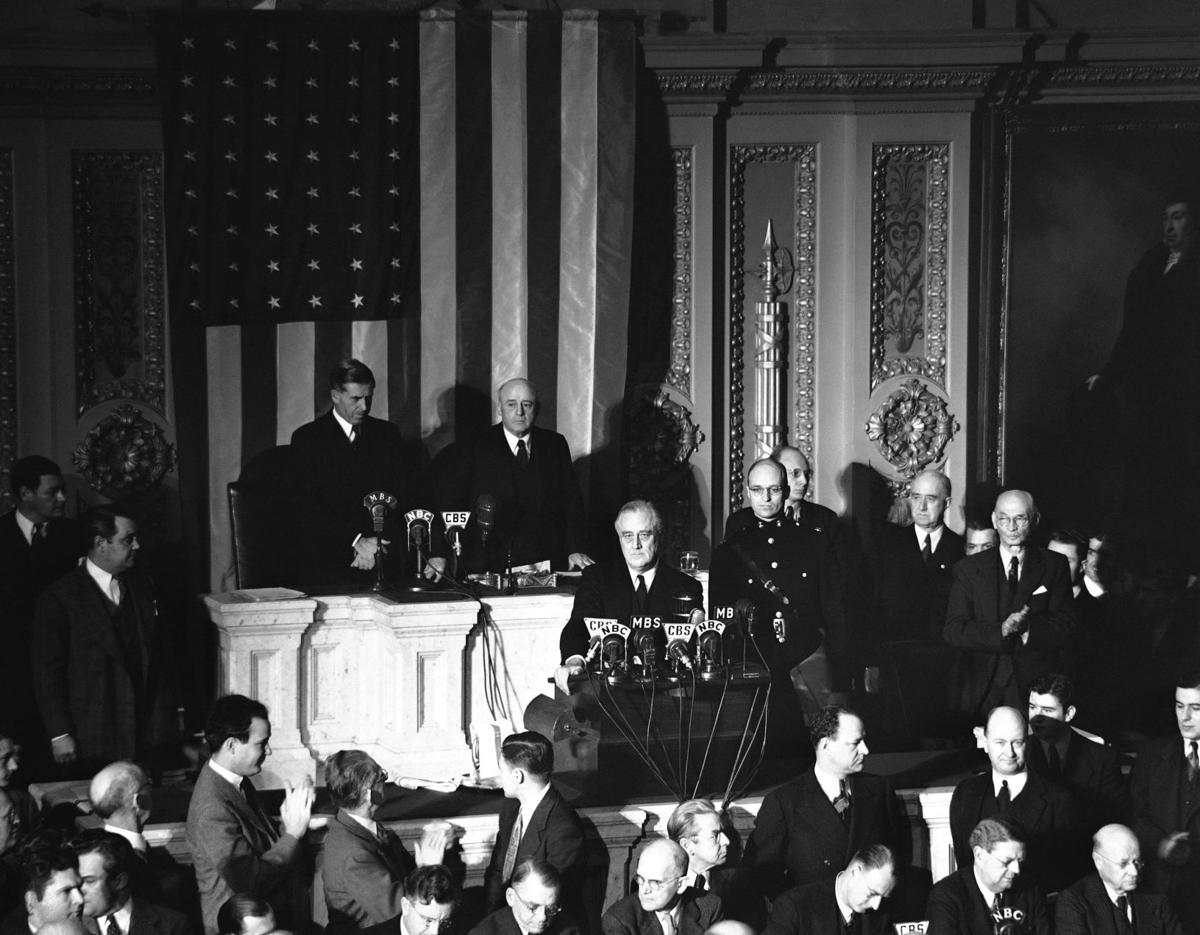 Ken Potts, a native of Honey Bend, was 18 when he enlisted in the U.S. Navy. He is one of only three remaining survivors of the USS Arizona that was attacked on Dec. 7, 1941, at Pearl Harbor.