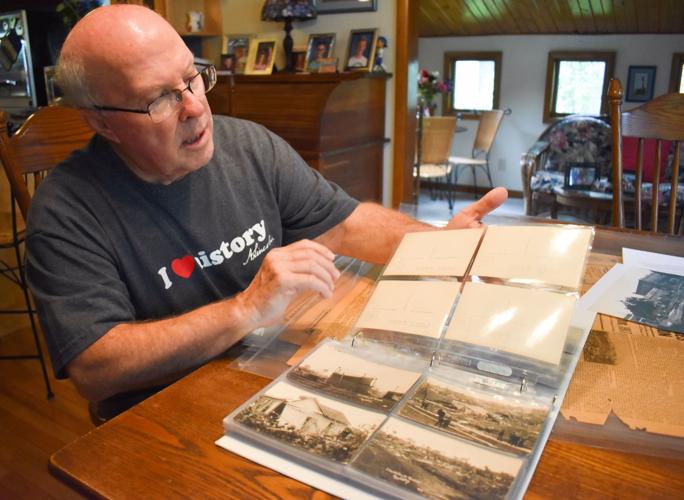 Gary Brinkmeyer of Charleston shows postcards depicting damage from the May 26, 1917, tornado that are part of his collection of artifacts. 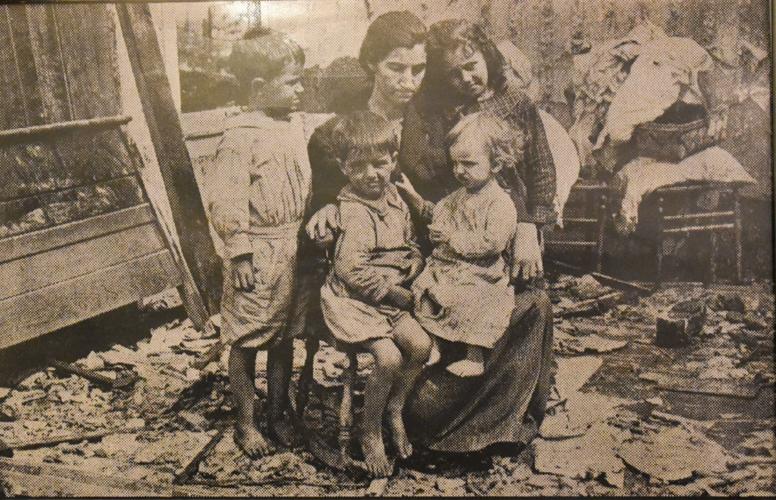 A 1917 newspaper photograph shows Dolly Wright and her children among the damage in Mattoon from the tornado that hit Coles County 100 years ago. The photograph is part of the Coles County Historical Society display in the museum at the Mattoon Amtrak depot.

CHARLESTON — It was described as "a deluge of water, wind, thunder and lightning" and "the most terrible shrieking roar you can imagine."

Such words are commonly used to described what hit Coles County 100 years ago today, though the magnitude of what happened barely has equal.

With 91 people killed — and nearly 600 more injured — in Charleston and Mattoon alone, the May 26, 1917, tornado still ranks as the third-deadliest on record for the state of Illinois.

Today, the anniversary of the tornado, there's still evidence of the true impact of the disaster.

A telling example is a photograph that shows a man carrying a Bible alongside a woman, a child with a doll and toy drum, and another child pushing a stroller, apparently a family walking past piles of debris and several damaged buildings.

Bill Lovekamp, an Eastern Illinois University professor who's studied the tornado's impact and who's helping with the anniversary observation, called the photograph "amazing."

"It really puts it in perspective, that it impacted real people," he said.

The photograph is part of a display on the tornado at the Coles County Historical Society museum in the basement of the Mattoon Amtrak depot. That collection and others give some idea today of what happened on that Saturday 100 years ago and the days that followed.

The tale of the "deluge of water" and "shrieking roar" comes from Izora Story, who witnessed the tornado from the Coles County Courthouse, where she worked as the county's assistant superintendent of schools.

Story's account, also part of the historical society's display, also tells of the devastation she and others experienced following the storm.

She described a scene at the courthouse where "corridors were filled with women screaming and begging someone to hunt their children or other members of their families."

The tornado was one of several that were part of a storm system that hit the Midwest that afternoon. It reached Mattoon just before 3:30 p.m. and, at its peak, had wind speeds of more than 200 mph, which would have made it an F4 tornado with today's rating system.

Story's account starts by noting a "peculiar haze all around" during sun-filled hours before the tornado. But another tells of "angry clouds" and how a "gathering gloom began to make itself apparent" but was met with little concern.

Visitors to the historical society museum can also take a step back a half-century and hear a recording of a documentary the WLBH radio station in Mattoon aired on the 50th anniversary of the tornado.

"Men still refused to heed the promptings of their better judgement, or else despite their judgement with that most terrible of maladies, the blind faith in the past that says because a destructive storm has never visited our city, it never will."

The documentary reported that "the duration of the disaster was brief" but "the destruction was appalling." And "the enormity of the disaster" soon led to a response that ranged from military personnel overseeing the town to "criers ... sent through the streets calling for food and clothing."

The documentary also mentioned the fledgling Illinois chapter of the American Red Cross and its response to the emergency, one of the first duties which it undertook. It took one day for a citizens relief committee to form to care for the injured and raise money.

A Charleston newspaper reported that "a pale gloom rests over our city" two days after the tornado, and how the loss of electricity and other effects of the storm limited the publication to one page for several days.

It's still possible to read accounts of "Charleston's awful calamity," as the June 4, 1917, edition of the Charleston Courier described the disaster.

The newspapers from the time of the tornado are among those that Charleston resident Gary Brinkmeyer rescued from the Times-Courier building on Sixth Street when the newspaper moved from there in 2003.

Brinkmeyer noted that, when the paper returned after the tornado to publishing an eight-page edition, part of its coverage was a list of damaged property along with the names of the killed and injured.

"They literally identified all the demolished residences, those damaged and the owners of the property," he said.

Brinkmeyer credited an interest in history, especially Charleston's, for preserving the newspapers as well as obtaining the postcards and a photo book that are also part of his collection.

"Tornadoes are so unusual," he said.

Many of the photos show general but extensive damage to buildings that were in Charleston at the time. Others are more personal, with one showing a mattress on which a baby and a Bible were found.

Brinkmeyer also noted how the newspaper reported on donations to the relief effort from other cities and towns, including nearly $2,400 from Chicago, quite a bit of money in the day.

But there was also what he described as "almost chastisement" as well, with the publication's urging people to contribute more.

"It was almost shaming people who hadn't done their part," he said.

The newspaper's call was to "the last opportunity to fix the price of your own humanity." It asked: "What shall the recovering angel write as the value of your soul?"

PHOTOS: Remembering the double tornadoes that struck Decatur in 1996

On Thursday, April 18, and Friday, April 19, 1996, two tornadoes struck Decatur, carving a path of destruction across the city. What do you re…

Inside Dubai center where sick turtles recover before returning to sea

Gary Brinkmeyer of Charleston shows postcards depicting damage from the May 26, 1917, tornado that are part of his collection of artifacts.

A 1917 newspaper photograph shows Dolly Wright and her children among the damage in Mattoon from the tornado that hit Coles County 100 years ago. The photograph is part of the Coles County Historical Society display in the museum at the Mattoon Amtrak depot.