SPRINGFIELD — Gov. J.B. Pritzker announced changes to the licensing process for marijuana dispensaries Monday after weeks of criticism from activists, lawmakers and applicants who were initially denied for the first round of 75 licenses.

Now, failed applicants will have an opportunity to amend their applications and receive more information as to why they were denied points in the scoring process.

In a news release Monday, Pritzker and the Illinois Department of Financial and Professional Regulation said they came to the decision after a “careful examination” based on “feedback from community leaders and stakeholders.”

The change allows denied applicants to resubmit their applications or have them rescored after receiving a “supplemental deficiency notice” that tells them which specific portions of their application lost points and prevented them from reaching the 252-point perfect score needed to enter the lottery to distribute licenses.

Those receiving a perfect score after this process takes place would be added to the lottery for the first 75 licenses.

An applicant may not, however, change the owners or makeup of its ownership group on resubmitted applications. Officials said the process allowing for rescoring could be wrapped up “this fall.”

The announcement of changes comes after just 21 of more than 900 applicants received perfect scores in the first round of grading by an outside company. That meant no other applicants would be eligible for any of the 75 licenses granted in the first wave of the new program, which sparked an immediate backlash from lawmakers, applicants and activists.

The outside professional services and auditing firm conducting the first round of grading was KPMG, and they will once again be grading the rescored applications, according to the governor’s office. A spokesperson from the governor’s office noted, however, that “IDFPR will ensure strong oversight of the process with KPMG to ensure every step focuses on fairness.”

The grow licenses have yet to be awarded, as the process has seen significant delays due to the coronavirus pandemic. 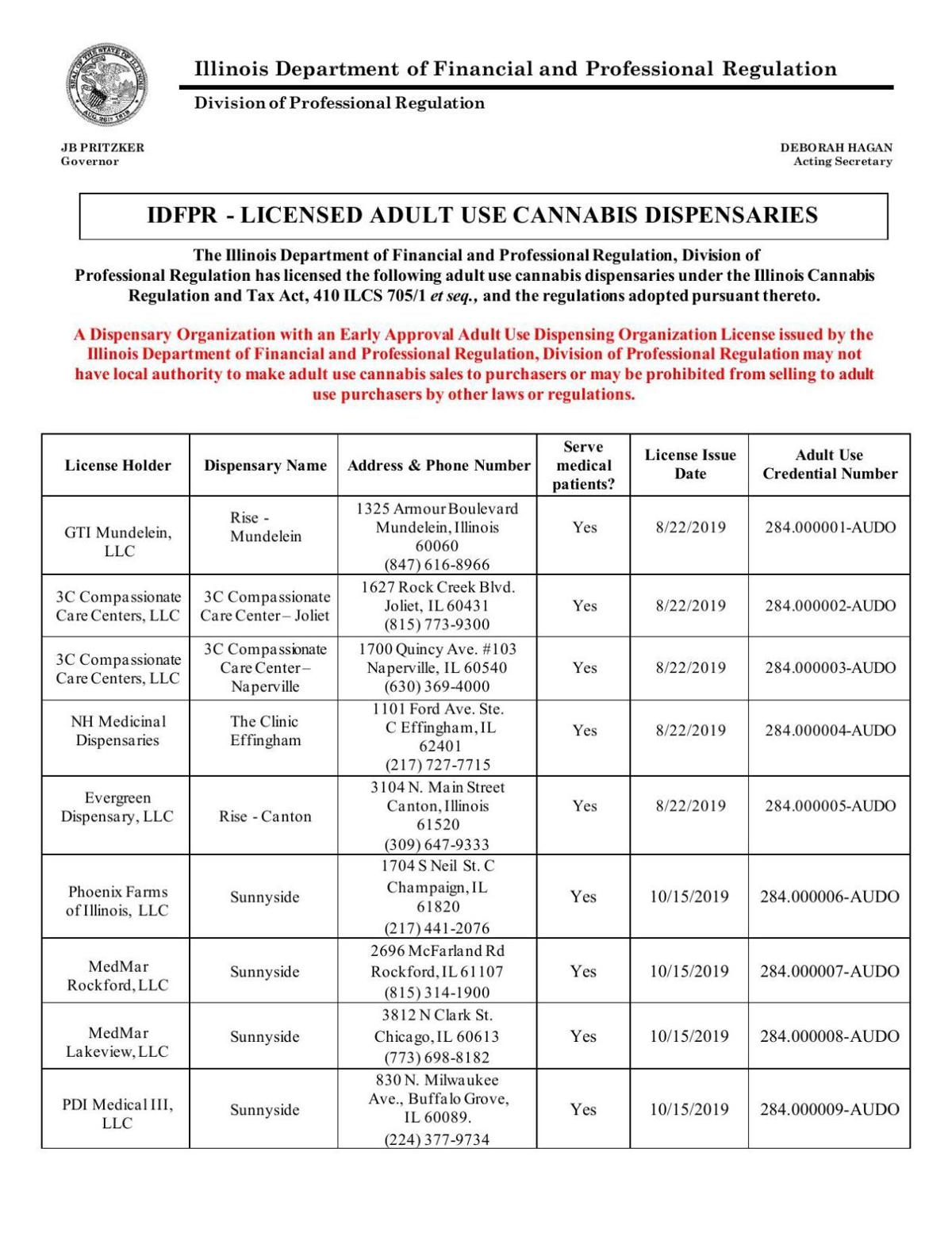 Per the legalization law, IDFPR will also conduct a disparity study evaluating the ethnic, racial and socioeconomic makeup of the adult-use cannabis market. Pritzker on Tuesday noted lawmakers could make changes to the law and application process to ensure equity in the future as more than 300 licenses are still to be distributed in future waves.

“I have already offered my suggestions for how the General Assembly can change the law so that we can ensure even greater representation in this industry, including capping the number of licenses or regions that any one owner can apply for, and allowing more applicants to advance to the lottery round than just those with the very highest scores,” Pritzker said at a news conference in Chicago.

After the initial announcement of just 21 applicants reaching the lottery, rejected applicants filed multiple lawsuits against the state.

While at least one of those suits has been dropped following Monday’s development from Pritzker and IDFPR, the changes to the process sparked backlash from some of the 21 finalists who feel changing the rules after qualifiers were announced is unfair.

So Baked Too LLC and Suite Greens LLC – two firms whose applications received perfect scores and qualified for the 75-license lottery – released a joint statement Tuesday saying Pritzker’s decision to make changes “clearly violates the Cannabis Regulation and Tax Act in multiple ways, and is, therefore, unfair to the social equity teams that knew the rules.”

They also opposed extending the amount of time it will take to award licenses, as the process has already been delayed from its scheduled May release date due to the ongoing coronavirus pandemic.

“There were simple solutions that would have followed the spirit of the law but were also fair to the social equity teams that did make the lottery and didn’t violate the law and could be implemented reasonably expeditiously… But this proposal is not it,” according to the statement, which accused the governor’s office of violating portions of the legalization law.

“CBAI and its members have been strong supporters of a robust and diverse cannabis industry that keeps social equity at the forefront,” according to the release. “Our members have incubated, mentored and supported social equity applicants to be competitive in the marketplace, and we’re encouraged by these additional steps to bring more diversity to the industry.”

Dr. Lawrence Hatchett, the lead investor for a group organized under the name Cannabliss Supply Co., had all 10 applications for dispensary licenses rejected in the first wave.

In an interview last Wednesday, Hatchett called the process a false hope for Black Illinoisans who wanted to get a foot in the marijuana industry to provide an economic boon to their communities.

But after Pritzker’s announcement, Hatchett said the state was moving things in a better direction.

“I’m going to give the governor credit where credit is due,” Hatchett said in an interview Tuesday. “I do believe that all these are good steps… I’m optimistic.”

Avis Bulbulyan, CEO of marijuana consultant group SIVA Enterprises, worked with a Black-owned business that received a social equity designation when applying for a license.

He and Hatchett said they are still concerned that firms that are not at least 51-percent owned by military veterans will still be unable to achieve a perfect score and move onto the lottery.

At the news conference Tuesday, Pritzker and his lead marijuana advisor, former state Sen. Toi Hutchinson, said such concerns could be addressed by the General Assembly amending the legalization law to provide a cut-off range for applicants to qualify for a license rather than only accepting the highest scores.

According to Hutchinson, that would allow worthy applicants who don’t achieve a perfect score for reasons such as not having a majority veteran stakeholder to still advance to the lottery stage. But those changes would require action from the General Assembly and be more likely to happen in future rounds, rather than for the first wave of 75 licenses.

“This process is designed for us to see all the things that worked and figure out how to tighten this as we move forward,” Hutchinson said, noting that 75 licenses in the initial distribution is an intentionally small number.

Pritzker echoed that statement while calling his administration’s handling of the first licensing round “far from perfect.”

“As governor, I’m not interested in protecting a process that people are afraid to trust,” he said. “I’m interested in doing everything that we can to advance the priority that we all share, and that’s fairness.”

Hatchett, citing his own experience putting hundreds of thousands of dollars on the line for a chance at a license, said many may be skeptical of the process going forward.

“I do believe what happened in the first round is going to disillusion 75 percent of ‘true’ social equity applicants,” Hatchett said, referencing his belief that some social equity applicants were fronts by bigger, out-of-state corporations. “If you are a person from a low socioeconomic area that just wasted or lost a certain amount of money already, are you willing to jump back in and take a second chance at something when you are still disillusioned that the system is really going to be fair?”

Business owners hoping to open retail marijuana shops in Illinois will get a second chance at qualifying for a license, after Gov. J.B. Pritzk…

The history of Groundhog Day you may not know

The history of Groundhog Day you may not know

FDA: Rapid tests are not as effective at detecting omicron

FDA: Rapid tests are not as effective at detecting omicron