The display gained national attention in 2018 for the Satanic Temple of Chicago’s contribution of a sculpture of a woman’s left arm, with a snake coiled around it, holding an apple. The statue is a metaphor representing the biblical story of Adam and Eve, according to two leaders of the Temple, who said the apple was to represent enlightenment.

These winter displays are installed for 30 days, and are protected by the U.S. Constitution’s freedom of speech guarantees, a sign posted near the tree states.

“The State of Illinois is required by the first amendment of the United States Constitution to allow temporary, public displays in the state capitol so long as these displays are not paid for by taxpayer dollars,” it reads. “Because the first floor of the Capitol Rotunda is a public place, state officials cannot legally censor the content of speech or displays.”

This is the second holiday season the satanic sculpture is displayed in the rotunda. Its design “keeps with The Satanic Temple’s values of advocating knowledge and rationality over superstition, ignorance, and dogma,” according to a press release.

Lex Manticore and Lux Armiger, the Temple’s Chicago chapter heads, said they were surprised by the backlash the installation, called “Knowledge is the Greatest Gift,” received last year.

“I don’t think people object to the substance of our message — the objection is to the messenger,” Armiger added. “The people that object to the sculpture are part of that supremacist belief. Certain people perhaps believe that their religious perspective should be the only one that’s recognized.”

For the 11th straight year, a Winter Solstice sign, installed by Kathryn Koldehoff of the Freedom from Religion Foundation, will also have a spot in the Capitol Rotunda. It is meant to make “freethought’s presence felt in the land of Lincoln,” according to a press release.

“At this season of the Winter Solstice may reason prevail. There are no gods, no devils, no angels, no heaven or hell,” the sign reads. “There is only our natural world. Religion is but myth and superstition that hardens hearts and enslaves minds.”

Winter Solstice, the shortest and darkest day each year, is on Dec. 21. The display represents “the real reason for the season,” Foundation Co-President Annie Laurie Gaylor said in a press release.

The group, which describes itself as “the largest national association of freethinkers,” has installations across the country. It began displaying its sign in Illinois’ Statehouse due to requests from members, a spokesperson said. He added he does “not believe we have any controversy” linked to its presence.

Dave Druker, a secretary of state spokesperson, said the “holiday tree” on display is owned by the state. He does not know whether the state purchased it or whether it was donated because, he said, it “predates” Secretary of State Jesse White’s administration.

The nativity scene was installed by Julie Zanoza of the Springfield Nativity Scene Committee, Druker said. She did not return a request for comment.

While a Chanukah menorah was present in past years, Druker said he is unaware of an application to place one in the Statehouse this year.

Rep. Sarah Feigenholtz, a Democrat from Chicago and a member of the Jewish Caucus, said she has made an inquiry with the secretary of state’s office about when a menorah will be installed.

“Of course it should be there. Wherever there’s celebration, there should be diversity,” she said.

About 10 years ago, a Festivus pole was included in the Statehouse’s holiday display in recognition of a satirical holiday popularized by the sitcom “Seinfeld.” Druker said he heard a group may want to bring it back this year but does not know definitively whether it will happen.

Groups interested in adding to the installation need to apply with the Physical Services Office, and only three have done so thus far, Druker said.

Manticore and Armiger, from the Satanic Temple, said while the application “is not burdensome,” the process is an “opaque” one because it is “not advertised” on the secretary of state’s website.

They added the Temple was required to carry insurance for its display, in case it falls over and causes damage to the Statehouse.

Wonder what the top of the Illinois Capitol dome looks like? We have photos.

A Capitol dome study conducted earlier this month revealed “some obvious flaws on the exterior of the dome,” a state employee said Tuesday. 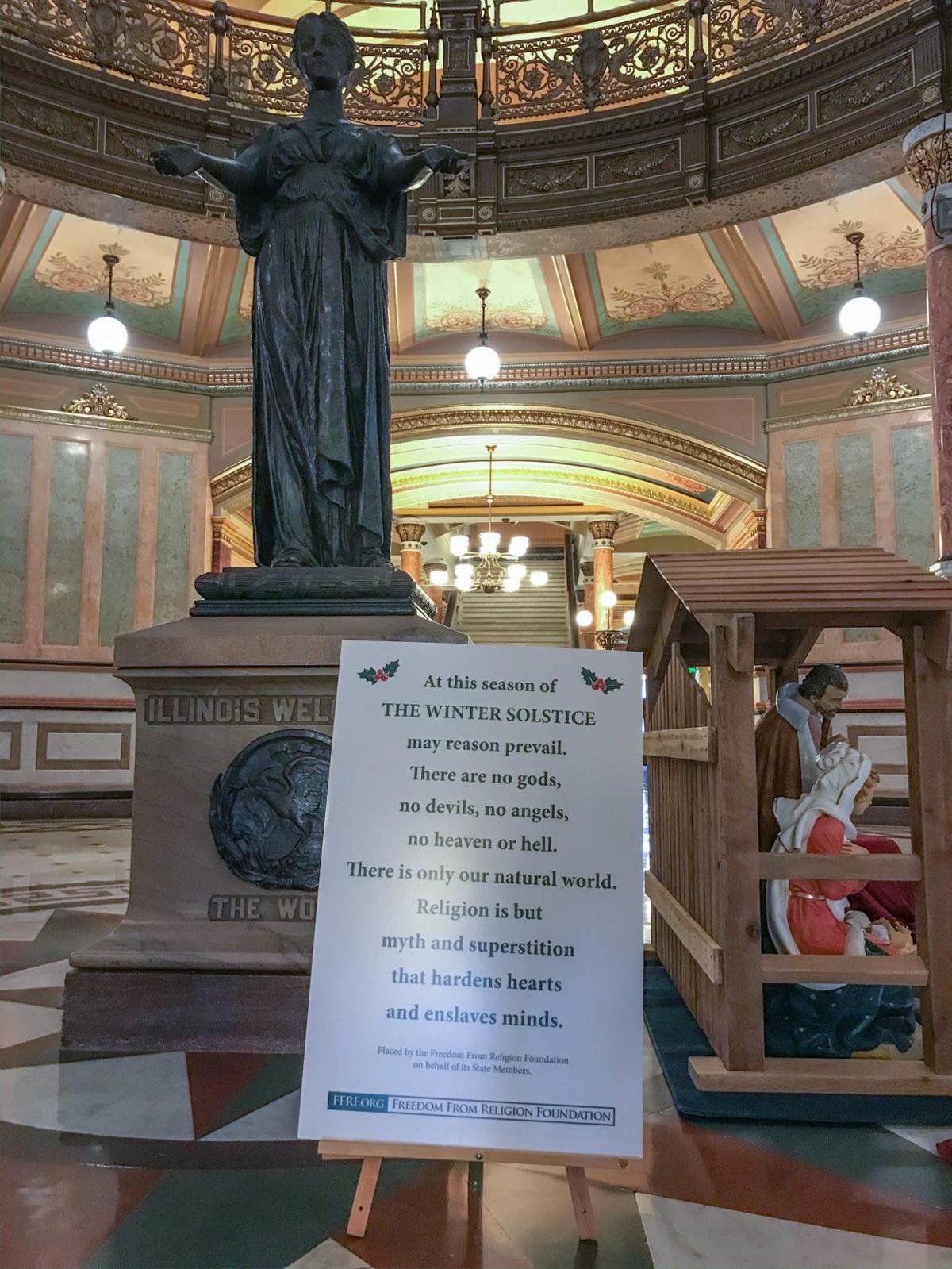 The Winter Solstice sign is on display on the Illinois Capitol rotunda for the 11th straight year. 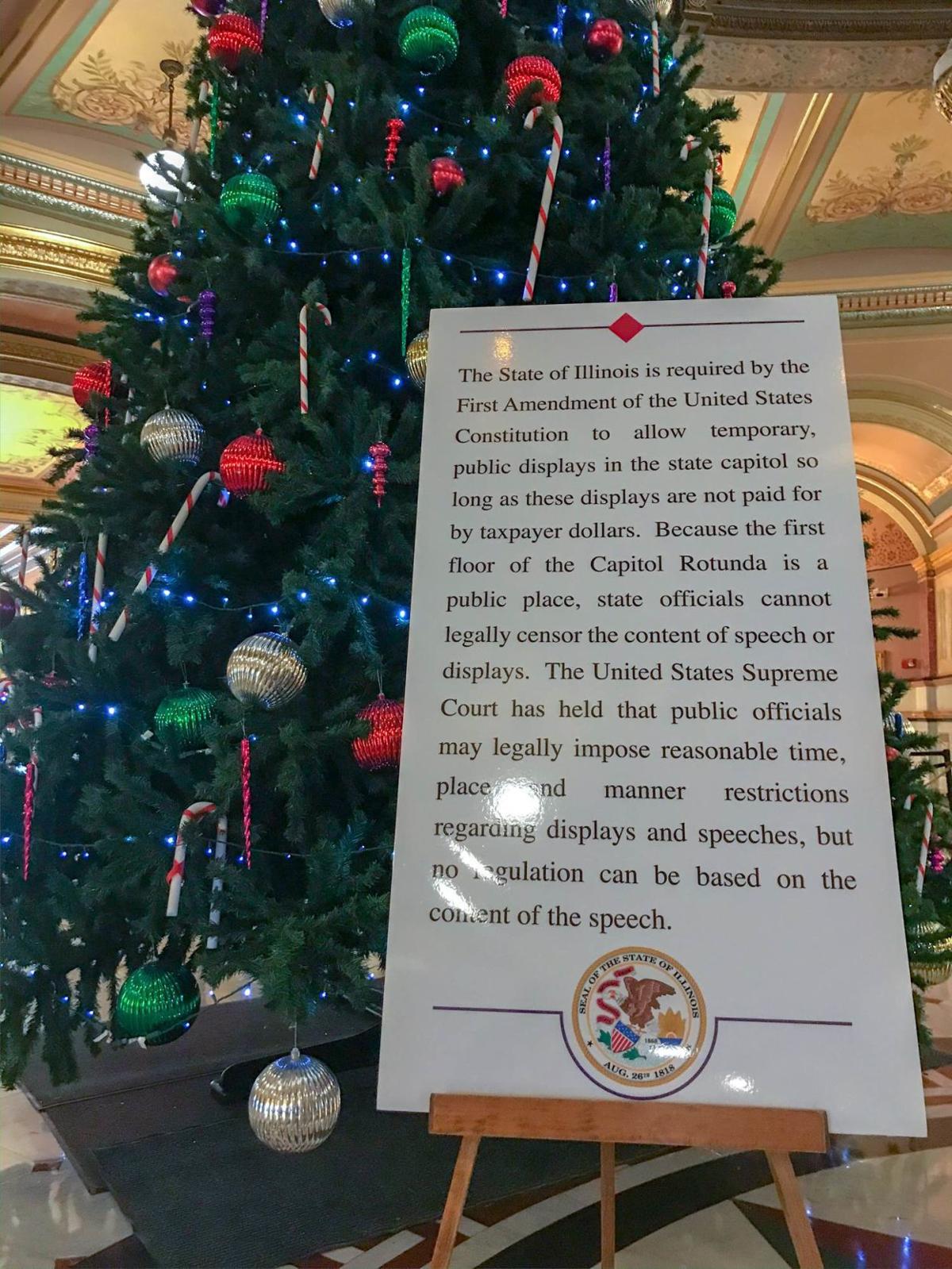 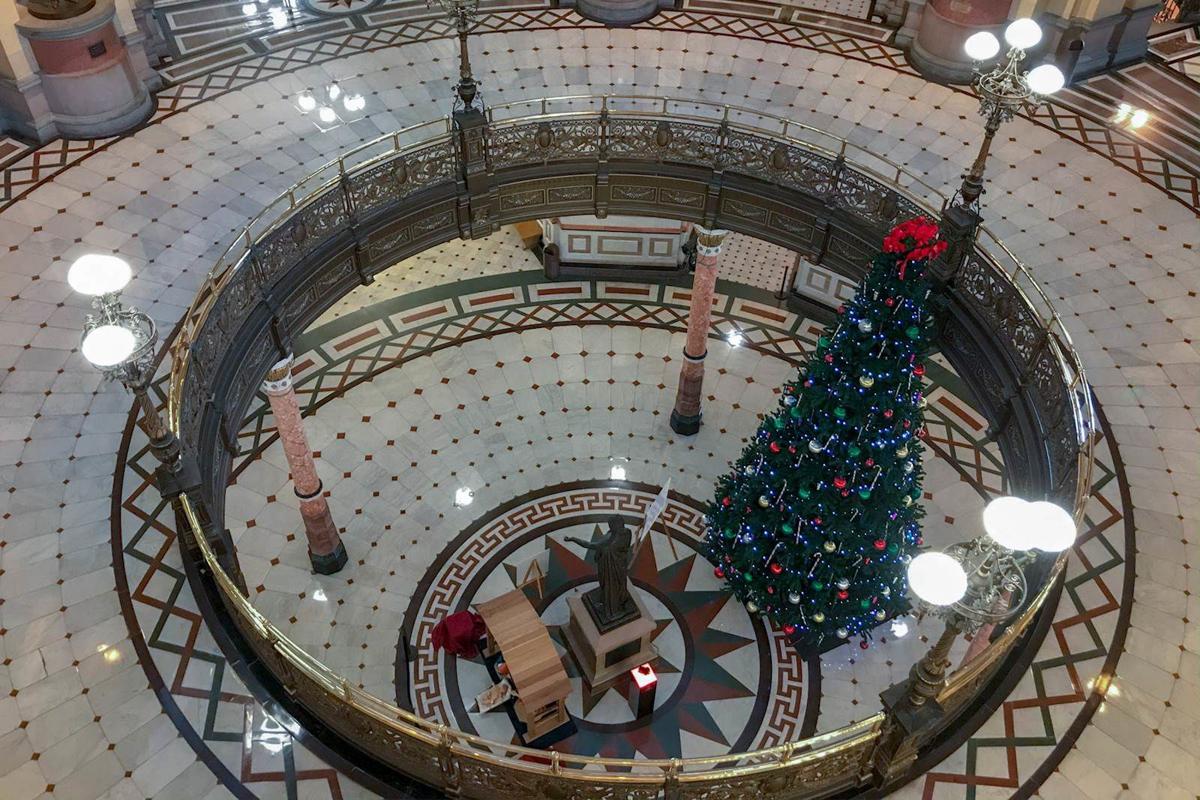 Holiday displays on the ground floor of the Capitol rotunda are visible from the building's third floor. 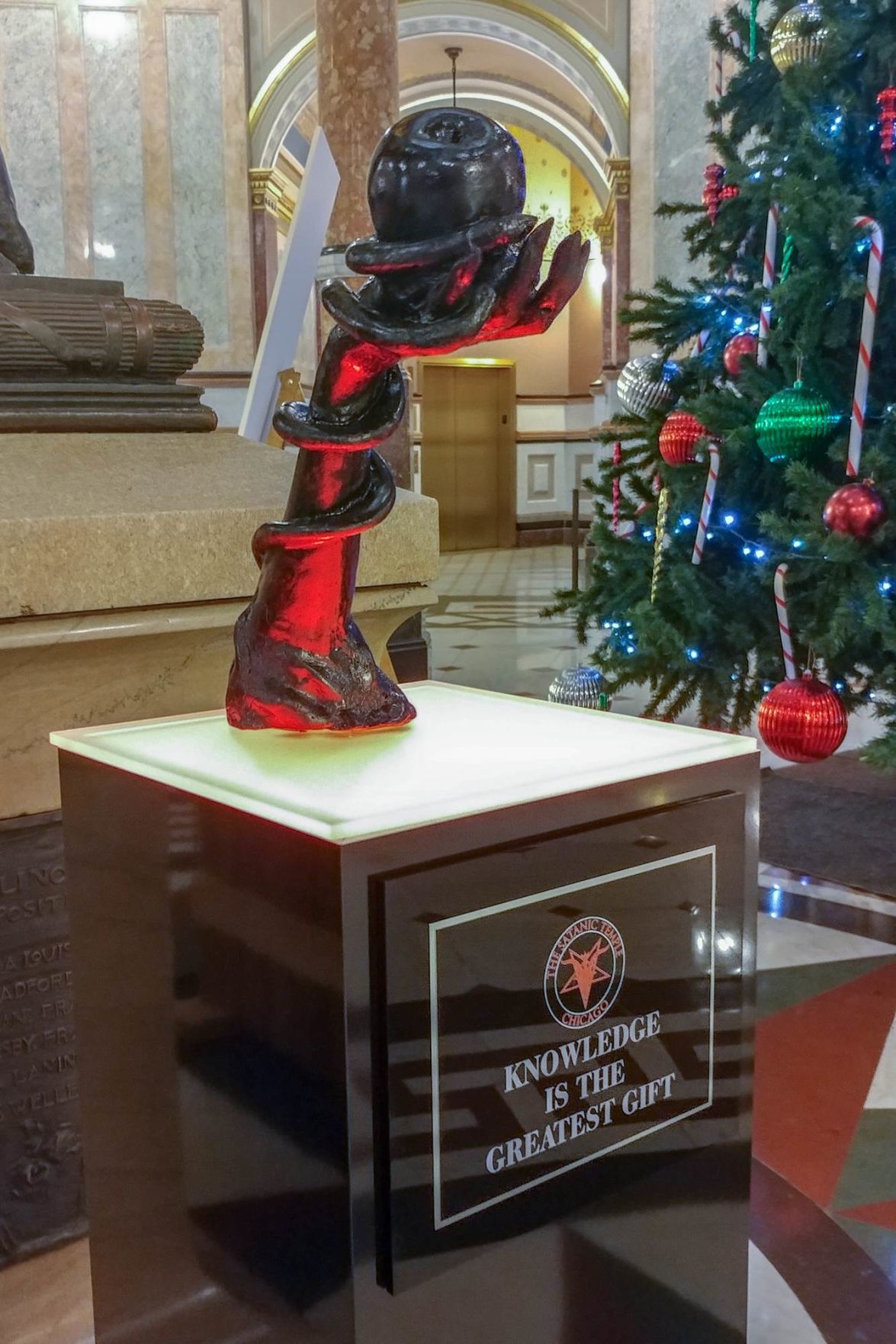 The Satanic Temple of Chicago's "Knowledge is the Greatest Gift" statue is on display at the Illinois State Capitol for the second straight year.