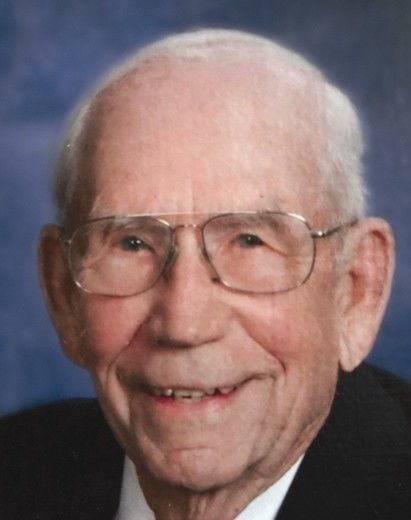 Services will be 12 Noon, Monday, February 10, 2020 at the Maroa United Methodist Church, Maroa, IL with Rev. Mary Alice Cunningham officiating. Burial will follow at Maroa Cemetery, Maroa, IL with Military Honors. Visitation will be 10 AM – 12 noon, Monday at the church. The family entrusted Calvert Funeral Home, Maroa, IL with arrangements. Memorials may be directed to the Alzheimer's Association or Maroa-Forsyth High School Athletics.

Bernard was born October 12, 1927 in Maroa, IL the only child of Bernard I. and Naomi K. (Linville) Myers. He lived nearly all of his life in Maroa, graduating from Maroa High School in 1945.Bennie spent 4 years serving in the Navy, after which he returned to Maroa and married the love of his life, Wanda Joan Rodgers. They were married for 67 “long, but happy” years until she passed away April 23, 2016. They raised four children: Kathy Sharp, Maroa; Kirk (Julie) Myers, Decatur; Lisa (Jim) Peck, Forsyth; and Kim (Rich) Fox, Bloomington. They loved all of their family but especially their grandchildren: Michael Blanco, Chase and Savannah Myers, Jimmy (Stephanie), Jordan (Samantha) and Kelly (Jenni) Peck, and Caroline, Jack, and Griffin Fox. They took special delight in their great-grandchildren, Stevie, Ted, and Charlie.

Bennie owned Linville Hardware in Maroa and together, with Wanda, ran the store for many years. After they sold it, he continued Myers Plumbing and Heating. After closing that business, he became a rural mail carrier in Maroa, driving over a million miles without an accident, retiring at the age of 84. He loved seeing “his kids” along the route. He was a long-standing member of the Maroa United Methodist Church and truly exemplified Christ by living with humility, loving others well and with generosity, and being a friend to all.

Bennie loved sports of all kinds and was an athlete, himself. He spent many hours watching his kids and grandkids play in Maroa, Decatur, and Bloomington. He loved watching the Maroa-Forsyth Trojans play anything and particularly enjoyed watching and talking about the football program. Until they were unable, he and Wanda spent many Friday nights parked in their reserved spot watching the game. He was also a great fan of the Bears, Fighting Illini and of course, his beloved Chicago Cubs.

Bennie spent the last 2 ½ years as a resident of Lincolnshire Place as dementia and age slowly claimed his memories and physical body. He died there on February 5, 2020. We want to give special thanks to the Lincolnshire staff as they became like family and cared for him so tenderly and well. Even though he may not have been able to remember or care for himself he was a gentle man and gentleman until the end.

Online condolences may be made at www.calvertmemorial.com

To send flowers to the family of Bernard Myers, please visit Tribute Store.