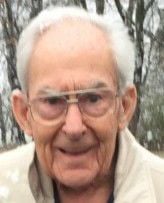 A private family graveside service will be held at Point Pleasant Cemetery, Decatur, IL. Memorials in Don's honor may be made to a charity of your choice.

Don was born in Decatur, IL on Oct 29 1923, the son of David L & Leveata (Scales) White. He was raised in Mt Zion IL and a graduate of Mt Zion High School. Don proudly served our country in the US Army during WW II in India. He married Mary Elizabeth Dempster June 29, 1955 and she preceded him in death on October 12, 1995. He worked at A.E. Staley (Tate & Lyle) for over 40 years as an Instrument Control Mechanic. After retirement, he was his wife's caregiver until her death in 1995. He was a Life Member of Stephen Decatur Masonic Lodge # 979. He was a Loving and devoted son, brother, father, grandfather, great grandfather & uncle. While successfully raising 4 children, he always made sure he took his parents on outings at least once a week. He enjoyed gardening, reading, he always had a camera or video recorder with him. He was an avid space enthusiast. He proudly donated blood every 8 weeks until his age prevented him from donating. Before there was Google, Don is who you called to ask any question you needed an answer for.

Special thanks to Dr. Anthony McCormack & Staff, Friendship Hill & staff, Veterans Home in Manteno & staff for all their Loving Care.

Don lived his life with quiet dignity and left in the same way.

To plant a tree in memory of Donald White as a living tribute, please visit Tribute Store.