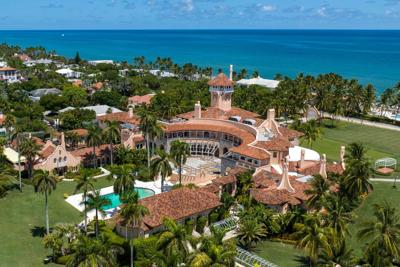 Is there no end to the mighty powers of our former President Donald Trump?

We were suitably impressed or, at least, astonished when he famously told us in his 2016 campaign, "I could stand in the middle of Fifth Avenue and shoot somebody and I wouldn't lose voters."

We were similarly surprised when he claimed to have drawn 1.5 million people to his swearing-in ceremony, despite aerial photos that showed Barack Obama's crowd to be at least twice as large.

"Throughout my life," he immodestly tweeted in 2018, "my two greatest assets have been mental stability and being, like, really smart."

Right. Yet, those alleged assets pale in comparison to the superpower he revealed in what was expected to be a typical softball interview last week with the Republican ex-president and his conservative pal and Fox News host Sean Hannity.

On the delicate subject of the more than 300 classified documents that the former president took with him to his Mar-a-Lago estate in Florida, now the subject of an extensive Justice Department investigation, Trump said, no problem, he had declassified the documents.

Oh? Pressing gently as to what sort of declassification process had occurred, Trump shrugged.

"There doesn't have to be a process, as I understand it," he said. "You're the president of the United States, you can declassify just by saying it's declassified, even by thinking about it."

Even by thinking about it?

"In other words," Trump said, "when I left the White House, they were declassified."

Right. "Process?" What process? To paraphrase a classic line from "The Treasure of the Sierra Madre," Trump don't need no stinkin' "process."

Yet Trump has held onto the documents in question, classified and otherwise like a spoiled child who refuses to share his toys, simply because "They're mine!'"

Even as Trump and Hannity taped their interview, Trump's lawyers were dealt a serious rebuke from a federal judge who has been given the task of sifting through the seized documents to sort out files subject to national security matters or attorney-client privilege.

The so-called special master, Judge Raymond Dearie, challenged the Trump lawyers' assertion that it could not produce evidence of a declassification for fear that doing so could harm them in future court settings.

That reasoning didn't wash with Dearie, who declared memorably: "You can't have your cake and eat it."

A three-judge panel of the 11th U.S. Circuit Court of Appeals wrote that Trump "has not even attempted to show that he has a need to know the information contained in the classified documents. ... Nor has he established that the current administration has waived that requirement for these documents."

The panel also said the debate over classification was a "red herring" because declassifying an official document would not change its content or render it personal without addressing "why (Trump) has a personal interest in" those documents.

In other words, "They're mine" is not enough.

That's a relief. Dearie was named special master by Florida-based Judge Aileen Cannon, a Trump appointee, who the Justice Department argued had hamstrung its investigation. But, after the appeals court decision, Cannon modified her decision to exclude documents marked as classified.

Put simply, Trump's declassification thoughts were not worth the paper they were not printed on.

That Trump thinks this comical pseudo-legalistic bait-and-switch would persuade anyone, including his own most loyal -- or gullible -- supporters, shows his poor regard for the intelligence of his own backers.

Amid other unfolding scandals regarding the last election and the next, that's really something to think about.

It’s time to talk turkey, folks. And even for an optimistic carnivore like me, the news is grim.

Commentary: If we want long-term solutions to our social ills, we must work to make our institutions better at ensuring justice for all.

This last year has been tough for a lot of people, and it goes way beyond the pandemic, as we all know. Here are some things you can be grateful for, even in the middle of chaos.

🎧 Episode 65: The hosts discuss the tricky balance of holding people accountable for their actions but the danger in taking things too far.

Hugs, a humming economy and help from neighbors should make Wisconsin thankful

OUR VIEW: It's great to be back doing what we love

The U.S. Senate has taken a major step toward protecting same-sex and interracial marriage by advancing a landmark bill that would rightfully recognize the legality of such marriages in every state in the nation.

The Supreme Court recently heard arguments from Harvard and the University of North Carolina about using race and ethnicity in admissions policies. At stake is the fate of affirmative action and the positive effects race-conscious policies have had on higher education and the workplace for more than 50 years.

Nov. 20 was Joe Biden's 80th birthday. Our first octogenarian president is two years older than Ronald Reagan was when his presidency ended in 1989.

Is it really news that Karen Bass will become the first female mayor of Los Angeles? In an era where women have already run Chicago, Phoenix, Fort Worth, Charlotte, San Francisco, Seattle, Washington, D.C., and Boston, the gender of the new Los Angeles mayor should not have dominated the headlines, as it did in numerous media.