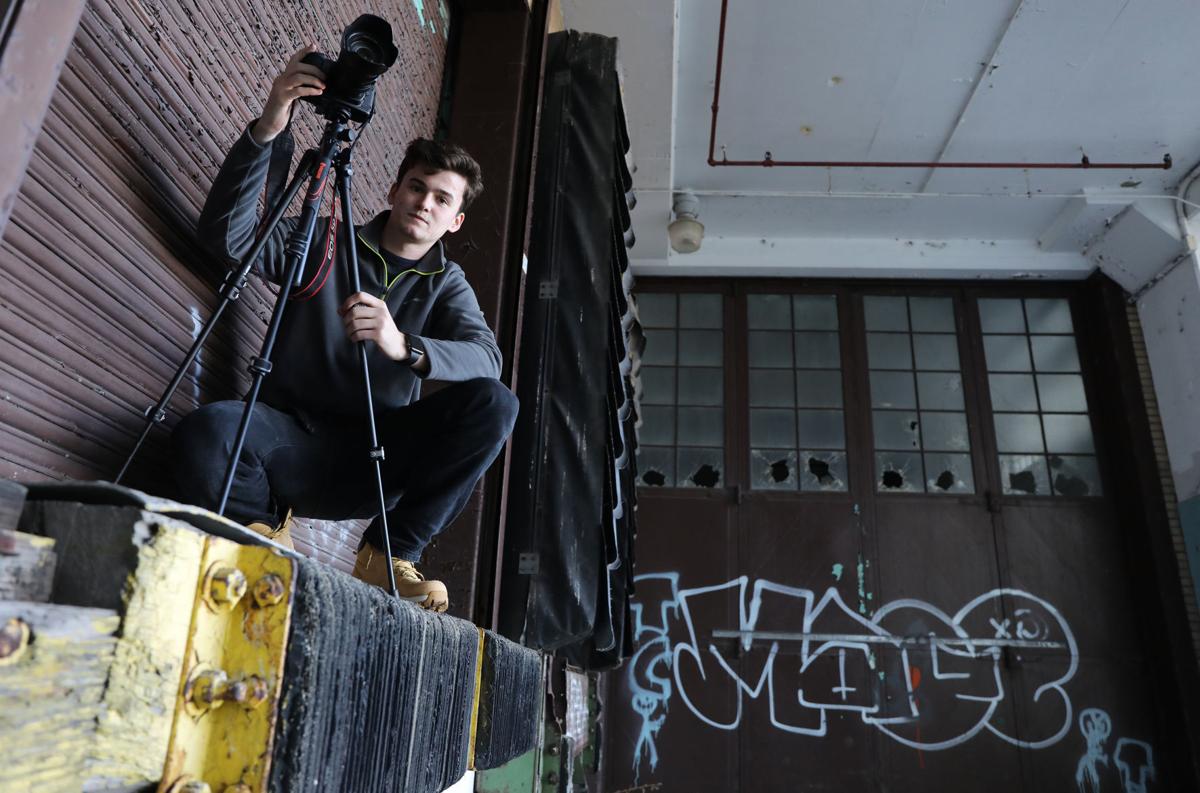 Urban explorer Mike Kinsch, 19, who likes to 'rooftop' and check out abandon buildings revisits the old abandon Wrigley gum factory on south Ashland Avenue in Chicago. Photos taken in the dock area in the parking lot of the abandon factory, where the entrance gate was wide open to anyone. 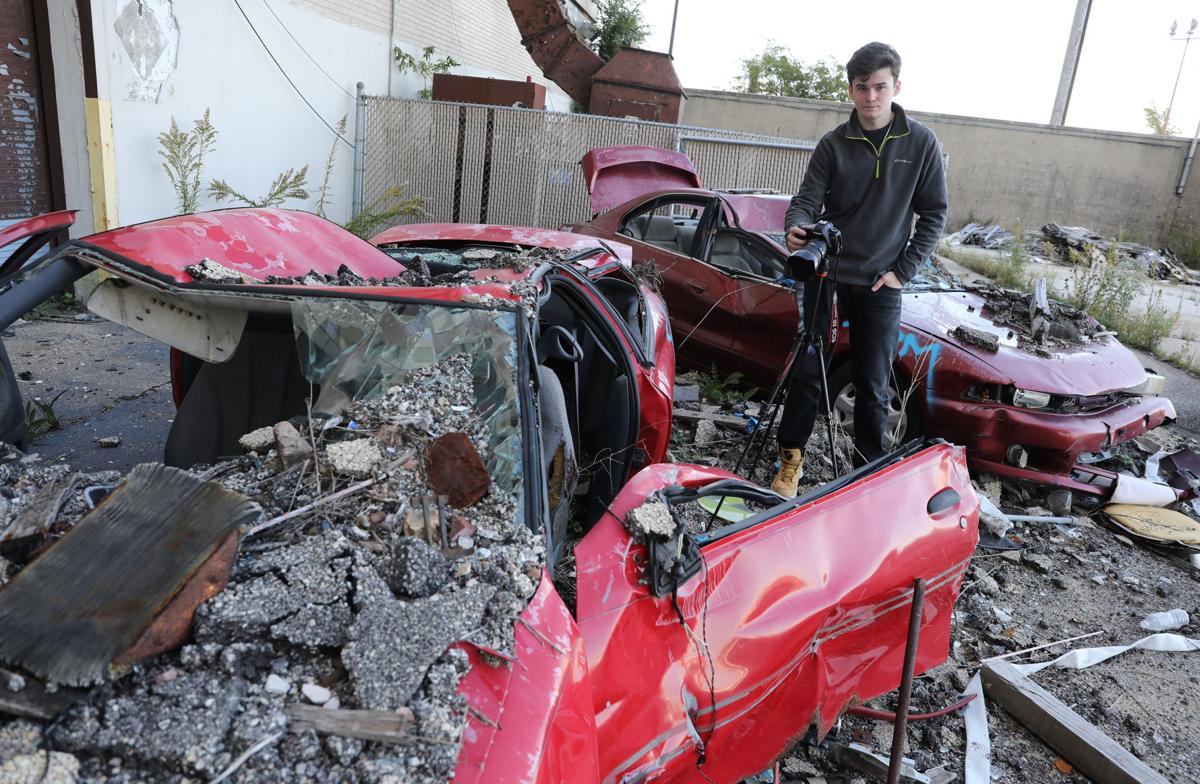 Kinsch in the parking lot area of the abandoned factory.

He wore a mask to protect himself from air thickened by two decades of decay. As paint chips crunched beneath his boots, Kinsch strolled the dark hallways of the former hospital where Hillary Clinton and John Wayne Gacy were born. Kinsch said he found discarded desks, old photos and even prescription drugs.

It was the first attempt at urban exploration by the 19-year-old, who joined a subculture of risk-takers motivated by architecture, photography or history who visit forgotten or restricted city sites.

“It’s really about exploring your own curiosity,” Kinsch said.

But urban exploration, urbex for short, comes with risks. Last week, 44-year-old Memphis newspaper executive Eric Janssen fell to his death from a top floor of the LondonHouse hotel in the Loop while apparently taking pictures.

Janssen identified himself on social media as an urban explorer, and his Instagram account includes several photos of abandoned and aging buildings. Police said he was in town for Open House Chicago, an architectural tour offering “behind-the-scenes access” to more than 200 buildings.

Janssen liked taking photos from the tops of buildings, a form of urban exploration known as rooftopping, but he was thoughtful about safety, friends said.

For some, the danger and adrenaline rush are part of the appeal.

Kinsch said “everyone knows the risks of being 40 stories up and being near the edge of a building.

“That’s why people are afraid of heights,” he said. “You know you could die.”

Art students, photographers and preservationists young and old have risked life and limb entering old factories, schools and hospitals in the hopes of seeing some of Chicago’s architectural gems before they’re gone.

Architectural photographer Richard Nickel — a crusading urban preservationist considered a godfather of the movement — was famously found dead in the rubble of the Louis Sullivan-designed old Chicago Stock Exchange Building in 1972. Nickel, 43, was believed to have died taking photos of the building’s ornamentation and trying to salvage pieces of the building when part of the structure fell on him.

Due to its architectural diversity and large number of abandoned buildings, Chicago is a rich place for urban exploration. People come to the city from across the U.S. to explore sites and take photos. Other Rust Belt cities, such as Detroit and Gary, with an abundance of abandoned buildings and factories are also considered hot spots for urban exploration.

Locally, the Edgewater hospital is a popular urbex site, as are the Damen Silos near Damen Avenue and 31st Street.

A Chicago police spokesman said there was nothing to suggest a rise in urban exploration in the city, and officers respond to complaints and may issue citations to trespassers.

For urban explorers who like photography, the payoff can be stark, captivating and even haunting images of bold architectural designs twisted by time and exposure to the elements. Risking injury or arrest to capture such images can offer an emotional rush.

The Facebook page Chicago land Urban Exploration, with more than 2,300 likes, lists a handful of rules, including no stealing or vandalism and to “leave places as you found them.” The site includes a reminder to be safe.

Even well-prepared explorers face danger, however. Kinsch said the Edgewater hospital’s basement is flooded and, during a return trip in the winter, he had to crawl over thin ice.

“It’s a scary experience (because) there’s 5 feet of water,” he said. “You don’t know what’s in the water.”

Eric Holubow, a 37-year-old West Town resident who has taken photos of dilapidated structures for the last 12 years, remembered one brush with danger climbing a wobbly scaffold outside a century-old coal plant in eastern Pennsylvania.

“I was climbing up to get up to it, and the steps of the building were collapsing below my feet, so I couldn’t go down,” he recalled. “These places are closed for a reason, because they aren’t safe. So it comes with the territory.”

Christian Haydel, 40, who recently moved away from the Chicago area, said he’s been urban exploring since childhood, when he would venture into sewer tunnels. One time in Detroit, Haydel said, he fell through a floor but was unscathed.

Like others, Haydel said he does it for the risk-taking and to absorb history.

Holubow, who studied design at the Illinois Institute of Technology and now works for advertising giant Leo Burnett, said he fell in love with the shattered skeleton of the old Washburne Trade School building at 31st Street and Kedzie Avenue.

“I just marveled at it. It was art deco; it was like six stories,” Holubow said. “It was just a massive place and clearly very abandoned and shuttered, and I was like I want to go in there.”

Holubow has explored derelict properties from Washington to Pennsylvania and published a book of his photographs called “Abandoned: America’s Vanishing Landscape.”

“These places have this kind of hidden-away beauty. It’s not its peak beauty … but there still is something below that I think is gorgeous and worth paying attention to,” Holubow said.

Holubow says danger comes with the territory. “It says it in the name, right? It is exploration, and you are not sure what you are going to find until you go into these places.”

Chicago-area photographer Chuck Janda, 43, said he was involved with a group called Chicago Urban Exploration in the 1990s and 2000s.

Janda said the hobby has evolved in recent years, particularly with social media and people trying to become famous on Instagram. Janda called some photos “nuts,” like a few shots he saw from people on frames at a construction site.

Kinsch, the teen who started exploring last year, has more than 1,300 followers on Instagram as mikeman902. He followed Janssen on Instagram and admired him from afar, he said.

Janssen’s Instagram features images from recent trips to a smokestack, a closed school, an abandoned library and cafeteria. The last photo he posted is a porcelain table in an embalming room of an abandoned Chicago-area funeral parlor.

Urban explorer Mike Kinsch, 19, who likes to 'rooftop' and check out abandon buildings revisits the old abandon Wrigley gum factory on south Ashland Avenue in Chicago. Photos taken in the dock area in the parking lot of the abandon factory, where the entrance gate was wide open to anyone.

Kinsch in the parking lot area of the abandoned factory.