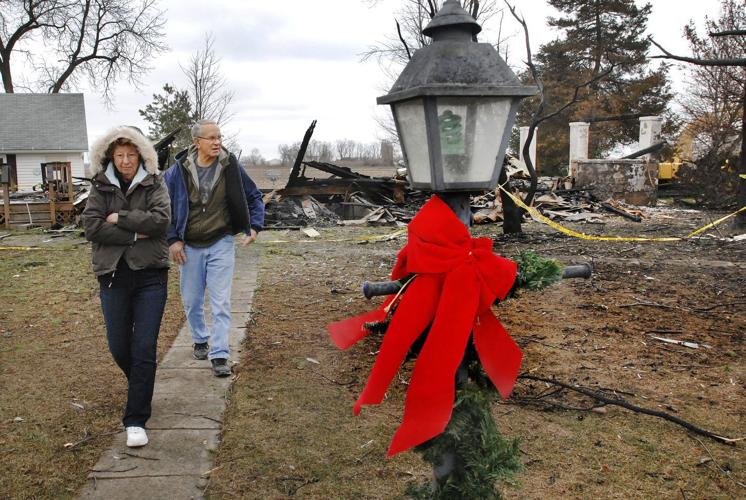 Judy and Ed Laskowski leave their rural Carlock property after looking over the damage after an explosion and fire destroyed the home they've shared for more than 48 years. 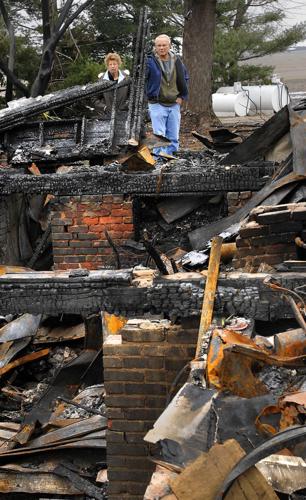 Judy and Ed Laskowski visit their home north of Carlock this week after it was destroyed in a fire that began with an explosion last week. The two-story house was Ed Laskowski's childhood home. 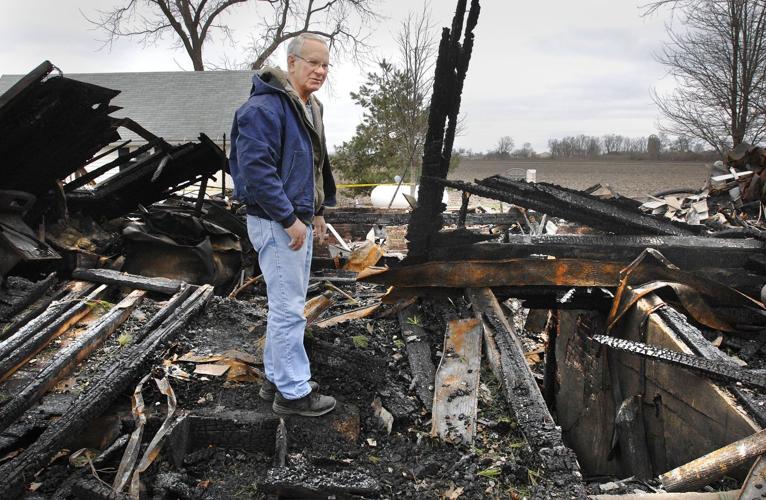 Ed Laskowski finds the entrance to his former home's storm cellar still intact after an explosion and fire destroyed the house last week.

CARLOCK — Through tears and laughter, Judy Laskowski tells the story of how her rural Carlock home blew up two days before Christmas.

"We must have had a guardian angel. I'm not sure how else we would have made it," she said while sitting in a waiting room while a doctor attended to her husband, Ed, who was injured in the blast.

She escaped unharmed when the two-story farmhouse at 50 County Road 200 East was destroyed Dec. 23 by fire following an explosion that apparently was in the basement.

"We feel like we are very, very blessed because I think if we had been anywhere else in the house, it might have been a totally different story," she said.

She spoke to The Pantagraph using her husband's cellphone — one of the few things he had with him when he fled the burning house.

Despite losing virtually all of their possessions, Judy Laskowski is able to find good in something bad.

"If there is a good thing to come out of this it's all of the love we've been shown — it's just overwhelming," she said. "We've had so many telephone calls and so many offers for a place to stay. We're so thankful for ... their acts of kindness and all of the help they have already given us and want to give us.

"As Ed said, there are a lot worse things than this. We're thinking forward, and we're going to make it because of everybody's love."

Still, it's difficult for Ed Laskowski, who will turn 75 next week, to talk about the loss of the house where he'd lived since he was 5 years old and that the couple shared for more than 48 years.

The Laskowskis have been staying with her nephew, Nathan Mangold, and his wife, Jenna, in Normal.

The cause of the fire remains under investigation, said Carlock Fire Chief Greg Mohr.

"The determined cause may end up being undetermined. It could be lightning, a power surge or any number of things. Every possible cause is being investigated," said Mohr.

The couple started the day thinking lightning had struck their home, or nearby, when they heard a loud boom at 7:46 a.m., Judy Laskowski said.

Their landline telephone service was knocked out, but the couple found no damage to confirm their suspicions.

"Edgar and Judy inspected the house, but they didn't go down in the basement, thank goodness," said his brother, Robert Laskowski of Normal. "They didn't find any damage so they were going about their business, thinking everything was OK."

Four hours later, while the couple was standing in the kitchen looking at some books they'd brought downstairs, the house was rocked by an explosion.

"What they had on their backs is what they escaped with. Fortunately, my brother had his billfold and cellphone in his pocket," said Robert Laskowski, adding the farm, which his brother actively farms, was not damaged.

Judy ran outside and down the road to get help while Ed went to his office to retrieve farm records "that we needed because we usually do our taxes in January," she said. "He ended up getting his hair singed."

How his arm was injured isn't clear, but Judy thinks he was hit by a flying bar stool. "He's got an open wound and some bruising," she said.

Their property is insured, but the couple hasn't decided whether they will rebuild the house.

"It's too overwhelming right now to make any definite decisions about what we're going to do," she said, noting relatives have provided them with clothes.

The reversal of roles has been difficult for Ed Laskowski.

"He's lived in that same house for 70 years and he's always been there for everybody in time of need," said his brother. "It's harder to be on the receiving end than it is to give help.

"I kind of think that's the way my brother is feeling about things," he added. "He's just overwhelmed by the support from others and their concern."

"It's very humbling to have to be the one on the other end," said Judy Laskowski.

Still, the Laskowskis are able to find the humor.

"My husband already had told a few guys that he was going to have a fire sale," said Judy Laskowski. "On Christmas Eve, we just told everybody what they were going to get. We like to give silly gifts. Of course, we had cash for them, but that got burned, too. We had a good laugh about that."

Judy and Ed Laskowski leave their rural Carlock property after looking over the damage after an explosion and fire destroyed the home they've shared for more than 48 years.

Judy and Ed Laskowski visit their home north of Carlock this week after it was destroyed in a fire that began with an explosion last week. The two-story house was Ed Laskowski's childhood home.

Ed Laskowski finds the entrance to his former home's storm cellar still intact after an explosion and fire destroyed the house last week.