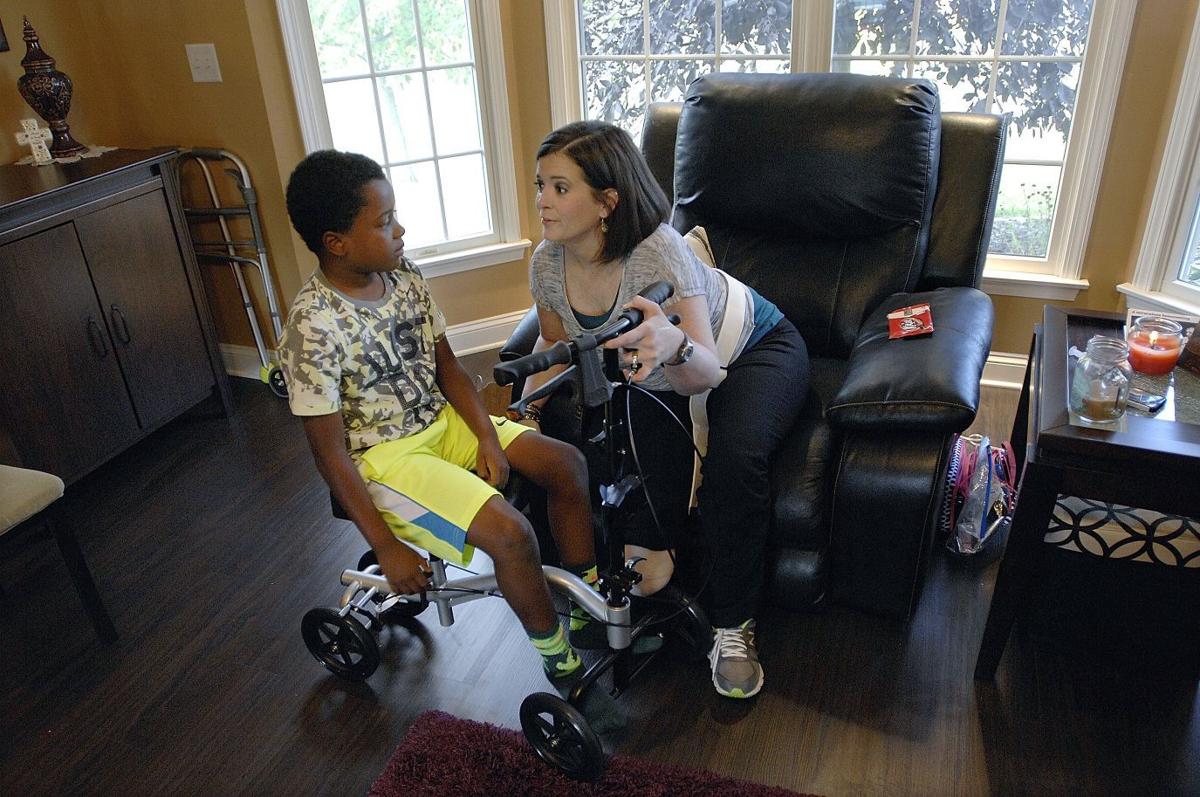 Lisa Mengarelli talks with her son, Nick, 9, before he goes out to play with friends in the neighborhood. Nick, sitting on his mother's knee scooter, said he's proud of his mom. 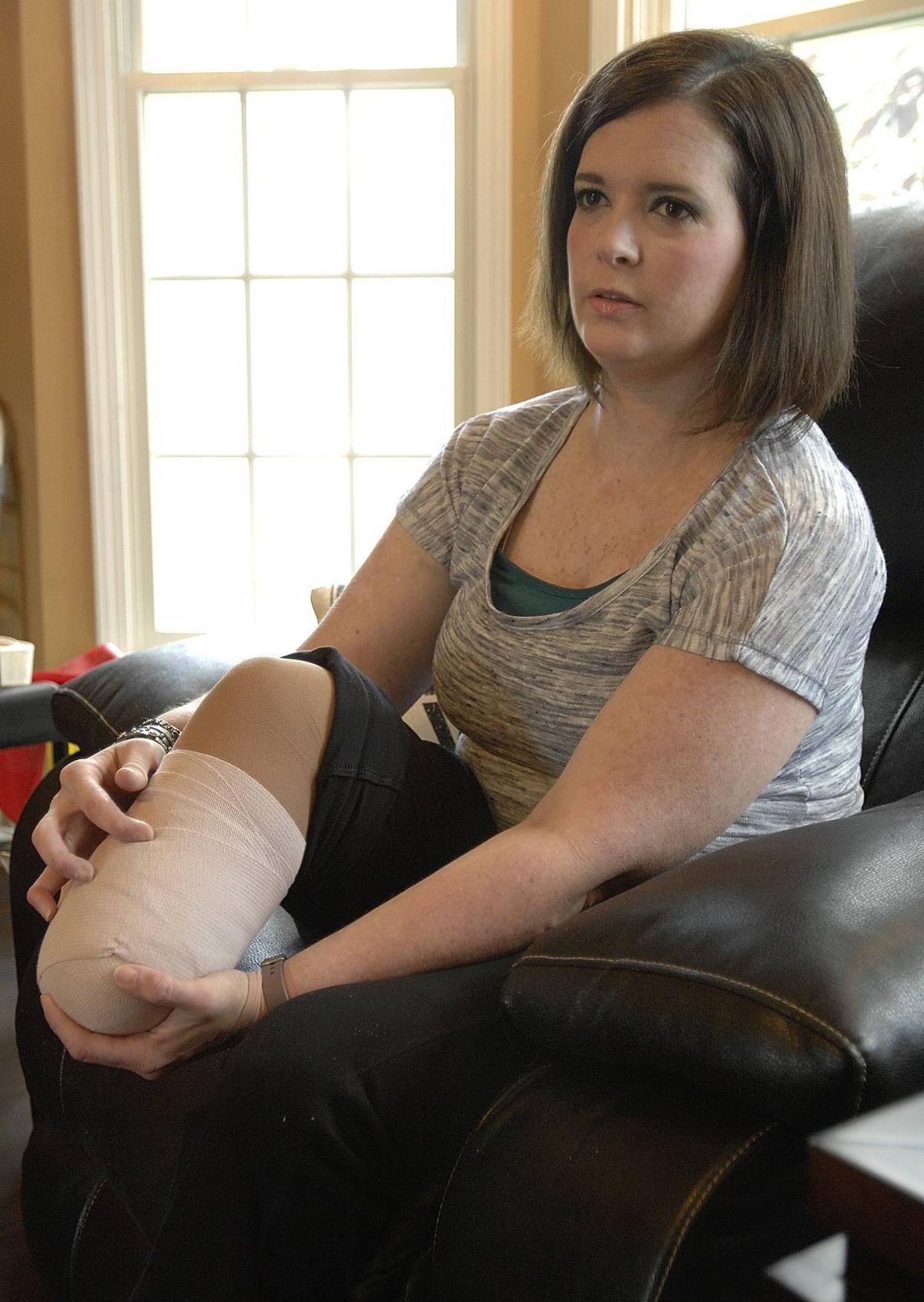 Lisa Mengarelli adjusts the bandage on her right leg, which was amputated below the knee on July 13. 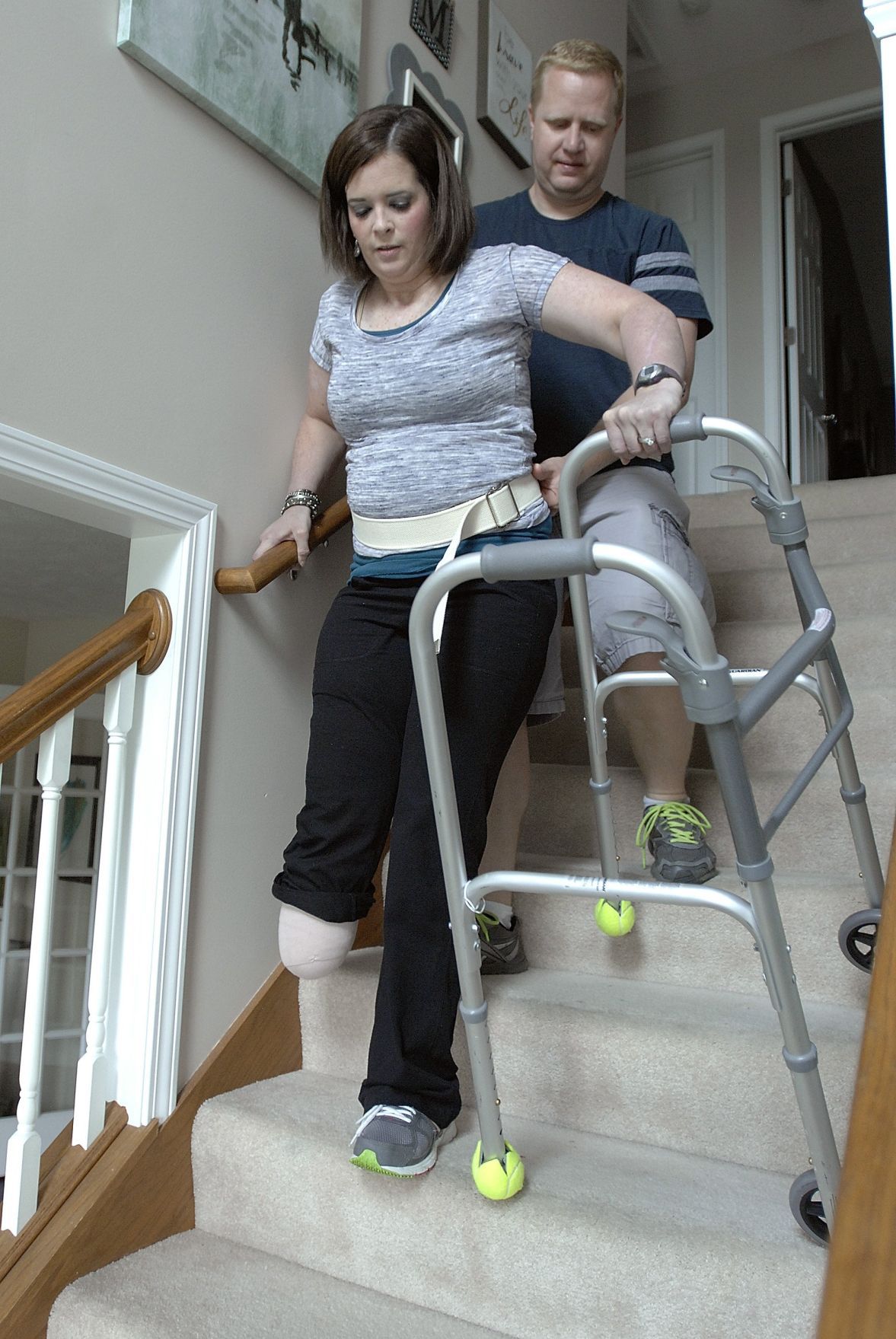 Lisa Mengarelli, as part of her daily therapy, walks up and down the stairs in her Normal home. 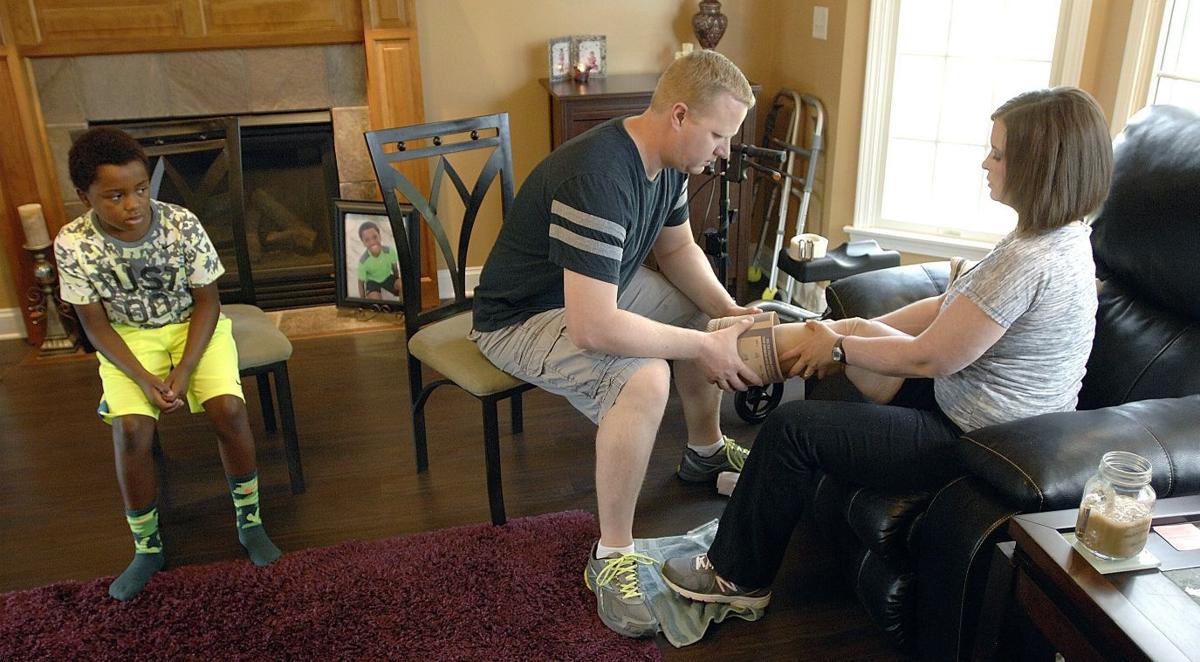 Ben Mengarelli helps his wife, Lisa, 36, rebandage her leg as their son, Nick, 9, watches. Lisa, who has battled numerous health problems for years, including infections in the bone of her right foot, decided to have her right leg amputated below the knee so she could be healthier for her son and husband.

NORMAL — Lisa Mengarelli gave up a part of herself to be a better mom, wife and nurse.

What she lost in July was her right leg just below the knee. What she hopes to gain is improved health and stamina to help her as a mother to Nick, a wife to Ben and a medication nurse to Prairieland Elementary School students.

"It was an emotional decision but I knew it was the right decision," Lisa, 36, said last week in her Normal home as Ben, 38, and Nick, 9, listened.

"They deserve a better wife and a better mom," she said. "They are taking care of me, but in six months, I'll have more energy."

"It takes a great deal of conviction to do what she did," said Dr. Robert Seidl, a Bloomington orthopedic surgeon.

"The things that have saved Lisa's life again and again have been her strength of character and tenacity, her family, her faith and her family's faith," said Seidl, who is credited by Lisa and her family with saving her limbs 18 years ago. Seidl, who is with Orthopedic & Sports Enhancement Center, has remained involved in her medical care.

Lisa, a Bloomington native whose maiden name was Clark, was 15 when her toes and hands began to turn blue when she got cold. She was diagnosed with Raynaud's phenomenon, a circulatory disorder.

When she was 17, her joints began to ache and her hands began to swell. She saw an arthritis specialist.

In summer 1997, she went to work at a Bible camp in Wisconsin but was rushed home when she had a high fever and irregular menstrual bleeding. When she felt as if her arms and legs were being stabbed by pins, she was rushed to BroMenn Regional Medical Center, where doctors saved her life.

By July 27, 1997, her feet, legs, arms and hands had swollen so much that she gained 50 pounds. Her capillaries burst and fluid was leaking throughout her body.

To relieve the pressure that was cutting off her circulation, Seidl cut open her legs, feet, arms and hands — saving Lisa's limbs — and she was put on a plane to Mayo Clinic.

While doctors didn't have to amputate her arms and legs, during the next three years at several trips to Mayo and BroMenn, Lisa underwent several toe amputations to rid her of infection, ankle reconstruction and had physical and occupational therapy.

"We got her out of the woods several times," Seidl said.

Doctors concluded that the bacteria that causes toxic shock had somehow gotten into her bloodstream. How that happened remains unknown. Her weakened immune system because of her earlier medical problems made her body more susceptible to illness.

She and Ben married in 2000. Her medical journey convinced her to become a nurse and she enrolled in nursing school.

In January 2002, she began experiencing rashes on her face, hands and stomach and became fatigued. She was diagnosed with lupus, a chronic inflammatory disease, resulting in joint pain and swelling. She was put on medication to keep symptoms under control.

Doctors believe that Lisa had lupus before toxic shock. The stress of nursing school helped to bring out lupus symptoms.

In 2003, she became the nurse for Dr. Luke Pogue, worked through pain and with leg braces.

Because a pregnancy would compromise her fragile health, Lisa and Ben adopted Nick in 2006 while Lisa was working as a nurse at Washington Elementary School.

In 2008, she had a lupus flareup. "From that point on, my health has deteriorated," she said.

From 2009 through earlier this year, she fought difficult-to-heal wounds on both feet. Meanwhile, she developed osteonecrosis in both knees as the bones lost blood supply and began to die. Both knees were replaced in surgeries in 2012.

She developed osteomyelitis — an inflammation of the bone because of infection — in her right foot. She was admitted to the hospital at least twice a year for intravenous antibiotics.

By May 2015, her pain and fatigue had increased and she, her family and doctors were concerned that the infection could get into her blood stream.

"If I got septic (shock) again, I might not make it," Lisa said.

Lisa decided to fight the infection by having her right leg amputated below the knee. "I think she made a good decision," Seidl said.

Dr. Michael Pinzur, an orthopedic surgeon at Loyola University Medical Center in Maywood, performed the amputation on July 13 and the surgery was a success. After eight days at Loyola, Lisa had two weeks of acute rehabilitation at Advocate Eureka Hospital in Eureka and returned home Aug. 5.

Each day, Ben helps her change the medicated wrap on her incision and then put on a "stump shrinker" which helps the swelling to go down and form her leg into its best possible shape. A bandage is wrapped around the stump shrinker.

Ben also helps her each day to go up and down stairs. She holds a handrail with one hand, her walker with the other hand and hops on her left leg as Ben provides support from behind.

Lisa gets around using a knee scooter. She places her right knee on the scooter and walks using her left leg.

"He's been through more than most 9-year-olds," Lisa said.

While Lisa remains on six medications, her pain is greatly reduced. She hopes to begin the process of getting a prosthetic leg in September. When it's comfortable to wear, she may need a new left leg brace and then will resume physical therapy.

"It's hard," Ben admitted. "But I truly believe that God put me in her life to help to take care of her. I do consider it a privilege. I love her. It's hard but we are excited about the new opportunities that will come with a new (prosthetic) leg."

Lisa hopes to return to school nursing next year. She hopes to be there for her family sooner.

Seidl said Lisa will deal with health challenges, including lupus, for the rest of her life.

But he added "I am in awe of Lisa Mengarelli and her family and I have every bit of faith that she will be a successful wife, mother and person who functions far beyond what most of us ever do."

Lisa Mengarelli talks with her son, Nick, 9, before he goes out to play with friends in the neighborhood. Nick, sitting on his mother's knee scooter, said he's proud of his mom.

Lisa Mengarelli adjusts the bandage on her right leg, which was amputated below the knee on July 13.

Lisa Mengarelli, as part of her daily therapy, walks up and down the stairs in her Normal home.

Ben Mengarelli helps his wife, Lisa, 36, rebandage her leg as their son, Nick, 9, watches. Lisa, who has battled numerous health problems for years, including infections in the bone of her right foot, decided to have her right leg amputated below the knee so she could be healthier for her son and husband.