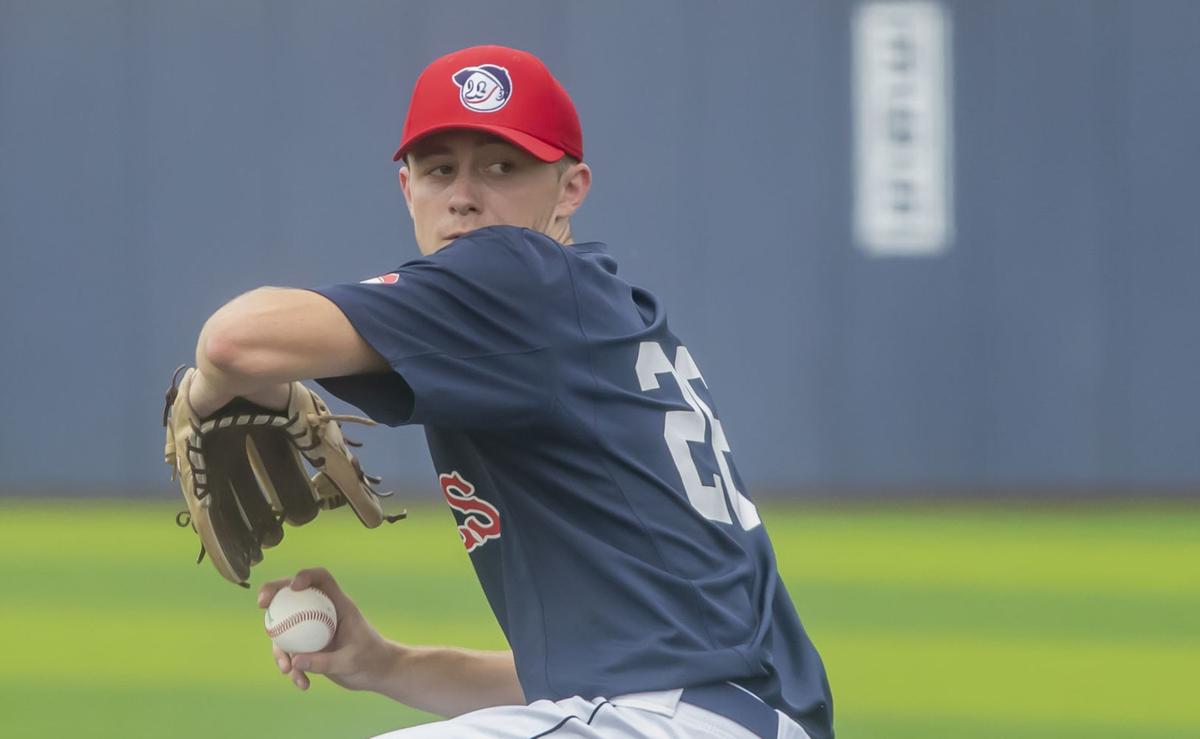 Decatur Commodores 18U pitcher Drew Martin (26) throws on Monday during a game at Millikin University. After playing games out of state, the Commodores are back in Decatur now that Illinois is in Phase 4 of Gov. J.B. Prtizker's "Restore Illinois" plan. 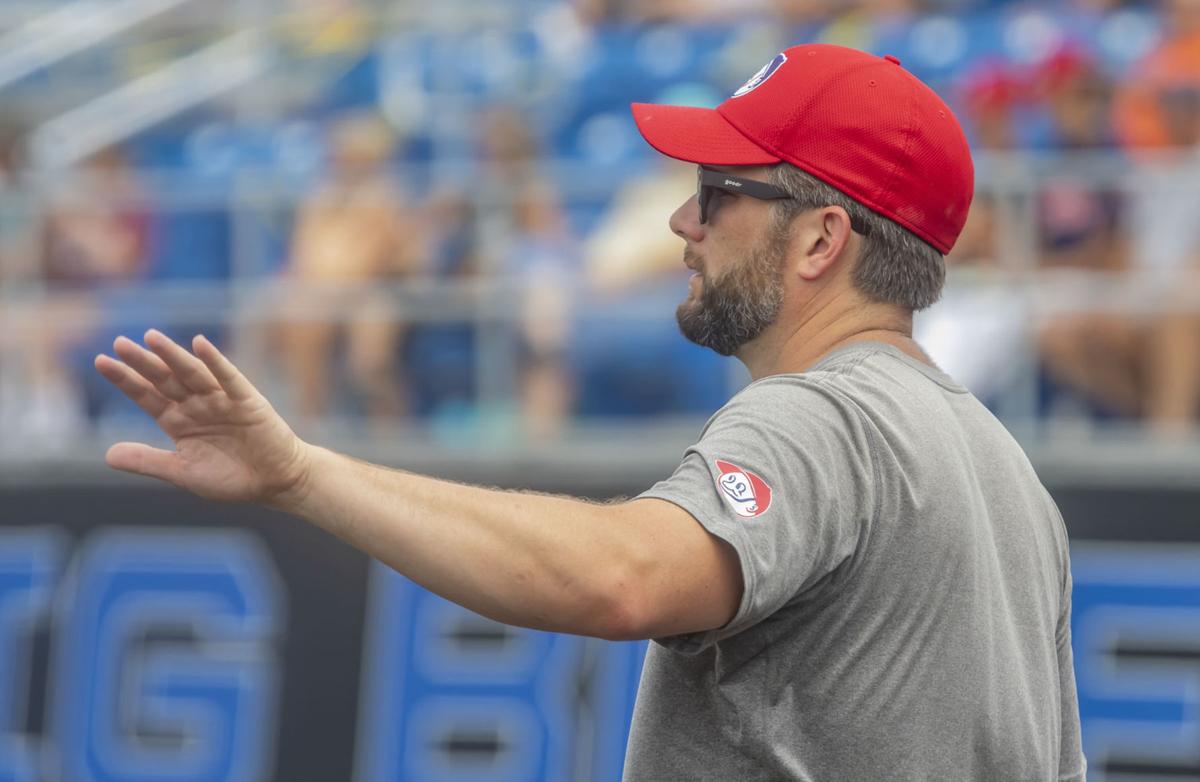 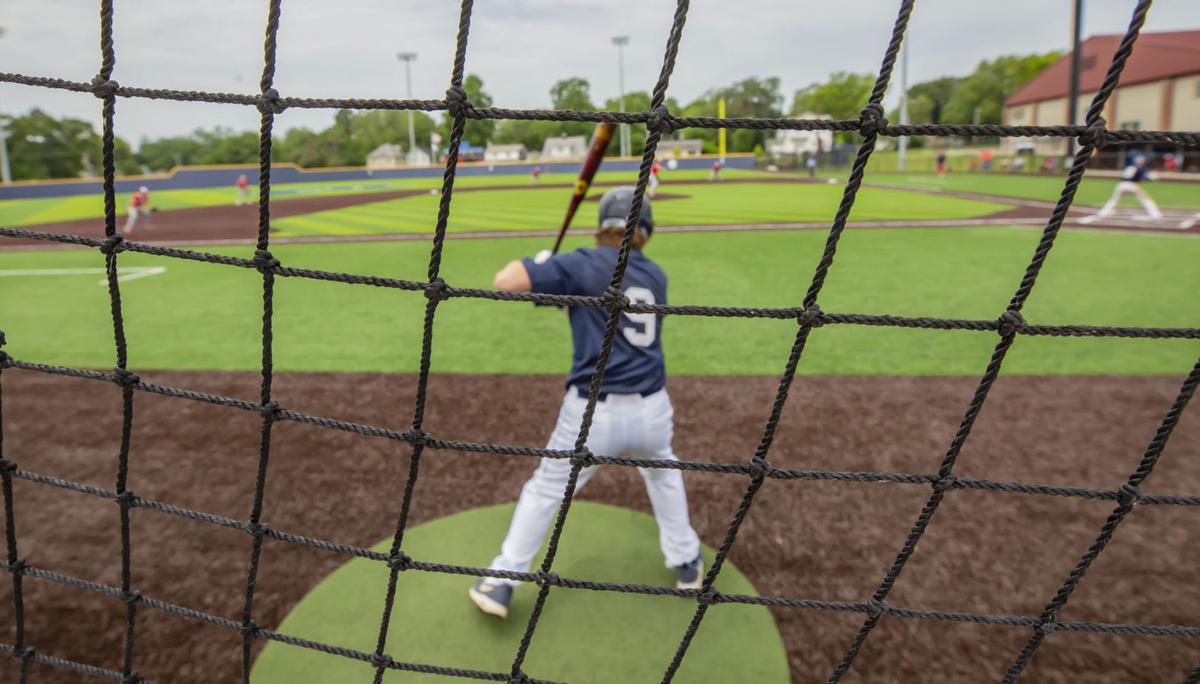 After playing games in Ohio and Missouri, the Decatur Commodores played at Sunnyside Park in Decatur on Saturday and Sunday and at the new Workman Family Field on Monday. 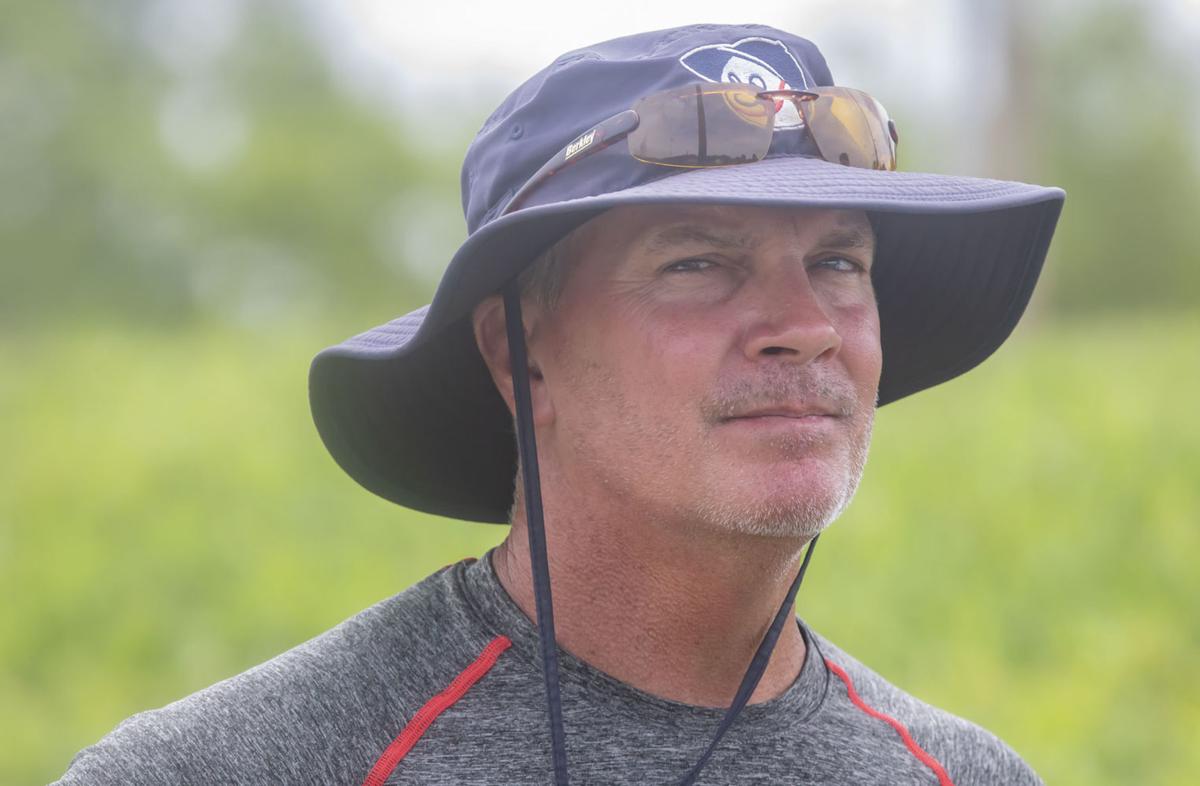 Kevin Koslofski, an organizational coach with Decatur Commodores, watches the 18U game on Monday during a game at Millikin University. 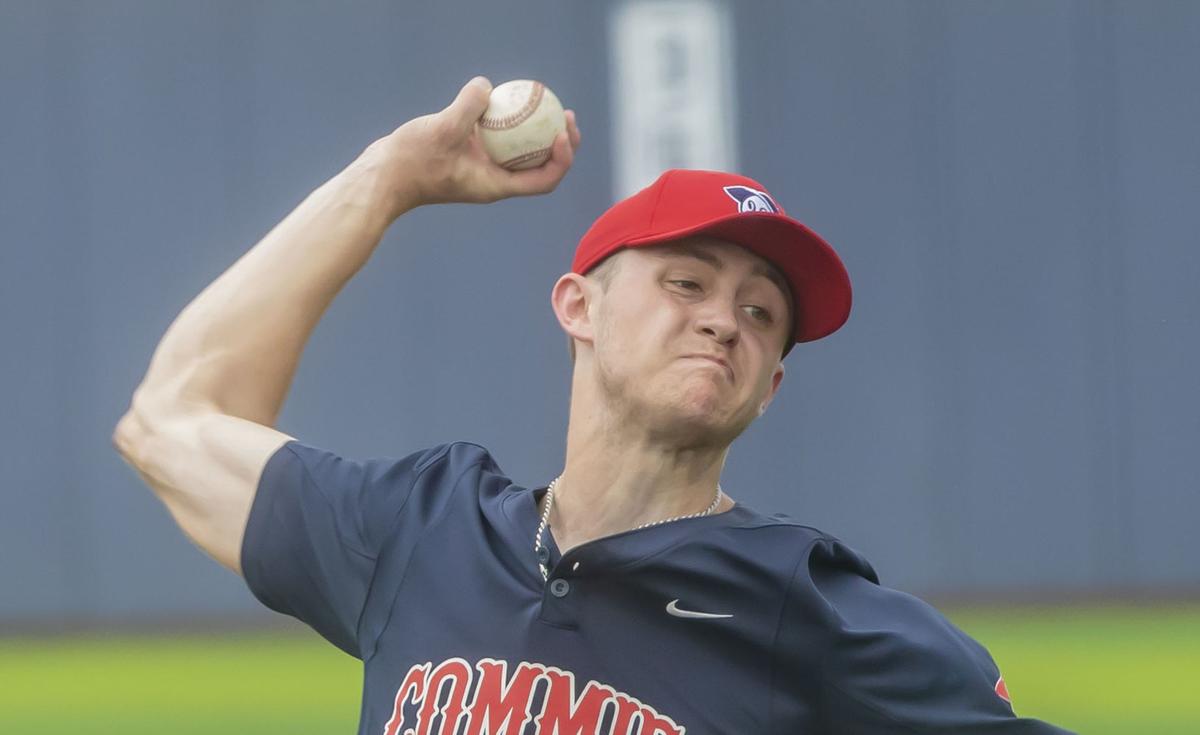 Decatur Commodores 18U pitcher Drew Martin (26) delivers a pitch on Monday during a game at Millikin University. Martin is entering his senior year at Mount Pulaski.

DECATUR — There was no boarding of the dogs, booking a hotel or traveling more than five hours each way for Tim Highley to watch his son, Braden Highley, play baseball on Monday afternoon.

Until this weekend, simply attending a Decatur Commodores baseball game was a multi-step process that included travel to Ohio or Cape Girardeau, Mo., as the state of Illinois prepared to move to Phase 4 of Gov. J.B. Prtizker's "Restore Illinois" plan.

On Saturday, though, with Illinois now in Phase 4 that allows for gatherings of 50 people or fewer with a 20% capacity for spectators at outdoor spectator events only, the Commodores returned to Sunnyside Park for games. Those games, a part of a Bloomington Tournament, continued on Sunday at Sunnyside before playing their first game at the brand new Workman Family Field on Monday afternoon — the home of Millikin's baseball team.

“It’s nice to be home," Tim Highley said. "We had both kids playing so we were traveling all over the place: Cape Girardeau, Cincinnati; it’s just nice to be home."

Braden Highley is committed to play at the Workman Family Field next season as a member of the Millikin baseball team and was glad to get an early chance to be on his future home turf.

“It’s awesome," Braden Highley said. "I’m going to college here. It’s really nice and we’ve got a really nice complex in this area and around here."

Prior to playing for the Commodores this summer, he hadn't played baseball since an injury ended his junior season at Mount Zion that cost him the summer before his senior year. All Illinois High School Association spring sports were canceled this season as a result of the COVID-19 pandemic, which further prolonged Braden Highley's return to the diamond.

“It’s worth it. It’s definitely worth it," Braden Highley said.

While the IHSA awaits approval from the Illinois Department of Public Health in order to move to Stage 2 of the "Return to Play" plan, travel baseball and softball teams are beginning to return to playing inside the state after traveling out of state in recent weeks.

Yellow tape marked off seats in the stands at the Workman Family Field to ensure social distancing was practiced. Heavy sanitation methods are in place and spectators had to sign a waiver and fill out a symptom questionnaire before entering. Tim Highley said he wasn't "that concerned" about the resumption of games.

“We’re pretty much just following the guidelines they set at the ballparks and just enjoy watching the games," he said.

Players also signed waivers had to leave the diamond through a fence in right field as to not interact with the next team to use the dugout. It's all part of the process to slide back to a sense of normalcy in the safest possible fashion.

“Sure, there are a lot of obstacles and hurdles and some of it’s like, ‘OK, this seems like a little too much,’ but I’d rather go above and beyond and do what we can do so we can continue to have events here," said Millikin head baseball coach Brandon Townsend, who also coaches the Commodores 18U team. "If we don’t follow those, things don’t allow us to do what we want to do and give us those opportunities.

On the field, the product hasn't changed. There were still strikeouts, base hits, runs scored, ground balls and diving catches in the outfield. Spectators who didn't sit in the stands stood around the fences, some not wearing masks.

The roster is made up of area players from the Herald & Review area and into the Springfield area. Being back on the field is a reprieve after an unusual spring season and beginning to the summer season.

“It really meant a lot to them," said Commodores organizational coach Kevin Koslofski. "When we started practicing you could tell they were so happy to be out playing it and getting a chance to have a summer."

As of Monday, the Commodores have played "a dozen or so games" this summer, Koslofksi said. Tournaments will wrap up in the middle of July, Koslofski said, before the program readies to host tryouts for the 2021 teams on July 21-22.  Until then, they're relishing the chance to play some games at home. There's still a trip to Louisville, Ky. planned, but games in Illinois are back after guidelines necessitated the Commodores go out of state for games.

“We’re willing to do what it takes," Townsend said. "At that moment, what it took was to go out of state to play and follow guidelines and that’s what it took to play. We’ve got guys who are just hungry to go out there. We’re very conscious and aware of what we need to be doing and making sure we’re taking the proper guidelines in safety, but we can still make that work and you can see a lot of people being able to make that work right now."

A few members of Braden Highley's family who haven't recently seen him play were in attendance on Monday. There was no extended drive home after the game, just a short drive back to Mount Zion.

“It was fun staying in the hotel with the team and getting to know each other, but it’s a long drive back after the tournament," Braden Highley said.

From a trip to state to the waiting game, Tuscola baseball players' season in limbo

Suddenly the prospect of not playing baseball for at least a calendar year is a reality that Logan Tabeling has to face.

St. Teresa baseball team awaiting green light to get back on the field

ARTHUR — Lucas Otto, a senior at Arthur-Lovington-Atwood-Hammond, will continue his baseball career at Lake Land College.

'I might not have a chance to get noticed in my senior year.' Eisenhower's Devin Wilder waiting on baseball verdict

Eisenhower's Devin Wilder was ready for his breakout season on the baseball field.

Dalton McGill and Camden Coleman are two of four seniors, along with Ethan Bartimus and Isaac Dickens, who are waiting to see if they'll play one more game on the Timberwolves' new field and in their high school uniform.

Reid Detmers leaned on the fence down the third base line at Millikin's Workman Family Baseball Field in a white "Rule Omaha" tee-shirt and a grey baseball hat with an orange outline of the state of Illinois in the middle.

Watch now: Even with uncertain future, LSA athletes get ready for 8-man football

DECATUR — Although football practices that feature plays and footballs have only just begun, LSA football coach Jordan Hopman has an eye on th…

Millikin University student Sherine Tumushemeze, from the African nation of Burundi, has weathered COVID-19 on campus. When coronavirus numbers began escalating months ago, the school switched to remote learning and took other measures as the U.S restricted travel overseas and the state issued a stay-at-home order.

Watch now: Decatur softball players more than ready to get back to the game

Neither heat, humidity or a pandemic was going to stop the USA Softball of Illinois tournament players.

Decatur Commodores 18U pitcher Drew Martin (26) throws on Monday during a game at Millikin University. After playing games out of state, the Commodores are back in Decatur now that Illinois is in Phase 4 of Gov. J.B. Prtizker's "Restore Illinois" plan.

After playing games in Ohio and Missouri, the Decatur Commodores played at Sunnyside Park in Decatur on Saturday and Sunday and at the new Workman Family Field on Monday.

Kevin Koslofski, an organizational coach with Decatur Commodores, watches the 18U game on Monday during a game at Millikin University.

Decatur Commodores 18U pitcher Drew Martin (26) delivers a pitch on Monday during a game at Millikin University. Martin is entering his senior year at Mount Pulaski.