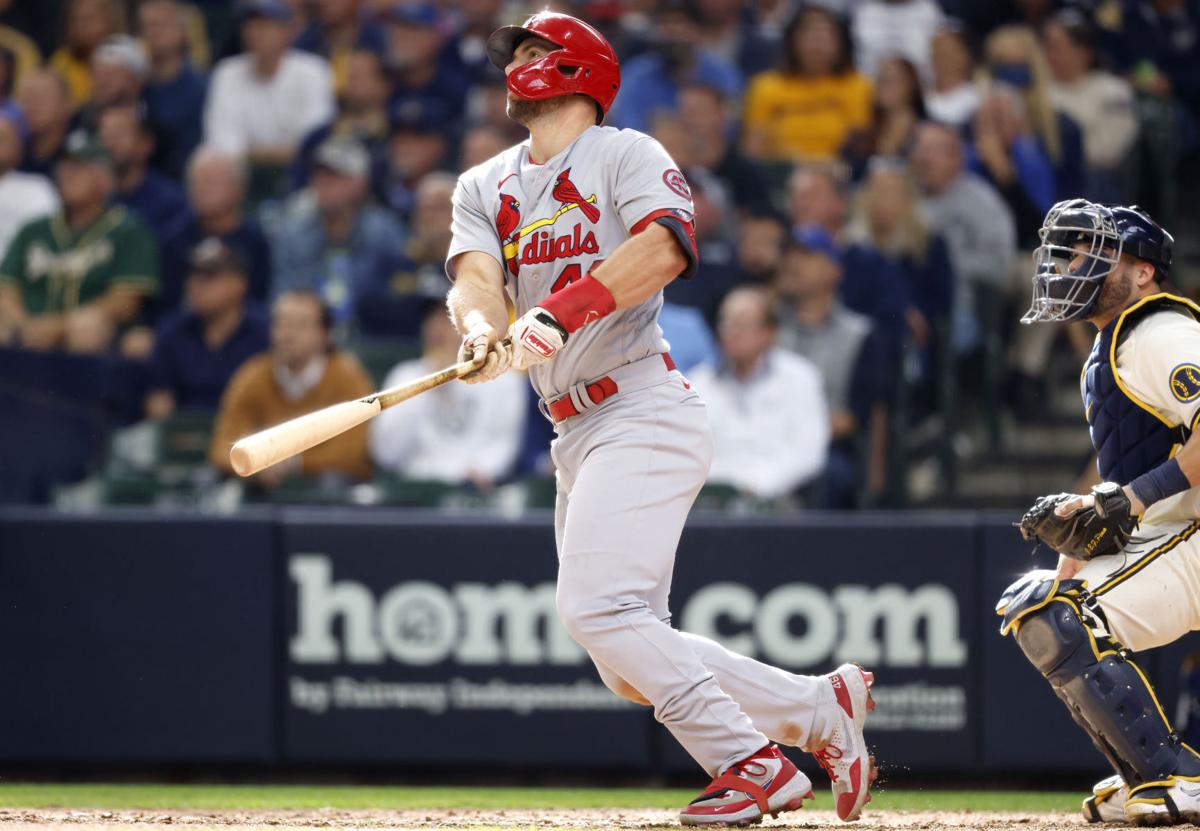 MILWAUKEE — Neither rain in Queens nor San Diego nor Brewers from Milwaukee nor gloom of being down by five with their best pitcher on the mound can slow the Cardinals from these September rounds.

Paul Goldschmidt drilled a game-tying homer in the seventh and added another homer later for good measure as the Cardinals scored eight unanswered runs for an 8-5 victory Thursday at American Family Field. The Cardinals swept the four-game series from first-place Milwaukee to extend their winning streak to 12 games. It’s the longest winning streak by a Cardinals team since the 1982 club that outlasted the Brewers in that fall’s World Series.

The Cardinals swept their third consecutive series and in the span of two weeks have gone from four games out in the wild-card race to steeling a four-game lead in it.

What’s a comeback in a game when they’ve comeback from so much in a season?

Milwaukee turned two homers, including a grand slam, against Adam Wainwright into a 5-0 lead before the Cardinals’ ace could get the 2,000th strikeout of his career or throw a pitch in the fifth inning. These Cardinals, ever the Cardinals, expertly and methodically picked away at the five-run deficit until vaporizing it entirely. Sounds like September, writ small.

Two walks and an error fueled the Cardinals’ rally in the seventh before Goldschmidt’s first homer of the game knotted the score, 5-5. In the eighth, a leadoff walk to Nolan Arenado invited more charity from Milwaukee to put the tiebreaking rally in motion. Arenado went first to third on Dylan Carlson’s third hit of the game. When Arenado’s run to third drew a throw, Carlson took second unchallenged. That proved advantageous.

Arenado scored on a passed ball to break the tie.

Carlson got to third on the same play, and that allowed him to score on a fly out that Yadier Molina sent to the deepest nook of the ballpark without the ball leaving the ballpark.

Goldschmidt hit his 29th homer of the season in the ninth inning to set the final score and give the Cardinals a third hitter with at least 29 homers. Goldschmidt joins Tyler O’Neill (29) and Arenado (33).

Giovanny Gallegos pitched the ninth for his 12th save. Lefty Kwang Hyun Kim pitched two scoreless innings in relief of Wainwright and lefty T. J. McFarland got the win.

The Brewers staked themselves to an early lead – er, rather, Tyrone Taylor did.

Before the Cardinals could get a runner to second base against starter Adrian Houser, the Brewers had a 5-0 lead.

The Cardinals did their best to warn Milwaukee what was coming.

In the fifth inning, Carlson tripled and scored on Molina’ RBI single for the Cardinals first run. A walk, a single, and a walk to pinch-hitter Matt Carpenter loaded the bases. Two times in the span of three innings the Cardinals would load the bases to bring the tying run to the plate, and sfor four consecutive innings they’d get a runner on base with one or fewer out. In the fifth, Tommy Edman popped up on three pitches to leave the bases loaded.

Given the same chance two innings later, Edman skipped into a groundout that brought home one run and Edman reached first by outrunning the double play. He got the attention of pitcher Brad Boxberger and drew a wild throw for an error. That brought home another run and allowed Edman to reach second.

He was there when Goldschmidt hit the game-tying homer.

Wainwright’s quest for the one strikeout that would give him 2,000 in his career became secondary to his search for one strike, just anything that looked like a strike to home-plate umpire Carlos Torres.

At the end of the third inning, after a 2-2 pitch had gone against him to create a full count, Wainwright chatted with Torres instead of leaving the field. Molina joined him, and it was clear that the conversation was civil, but purposeful. Wainwright wasn’t going to have much luck getting that 2,000th strkeout if he wasn’t get calls on any strikes and didn’t know from one pitch to the next where the strike zone would be for him.

By the time he faced Luis Urias to lead off the fourth inning, Wainwright had delivered 24 pitches with a two-strike count.

He had zero strikeouts.

The milestone came from Urias as Wainwright bent a curveball – of course – past the Brewers infielder for the only strikeout of his start. That whiff joined Wainwright with Bob Gibson as the only pitchers to have at least 2,000 strikeouts as a Cardinal. Wainwright is the 85th pitcher in the majors to reach that total in his career, and he’s one of nine active players with that many strikeouts.

Wainwright’s start was over at the end of the same inning he reached 2,000.

The start was only his third of the season of four or fewer innings. The only runs he allowed came on Taylor’s swings. But when Wainwright’s spot in the order came up in the top of the fifth inning, the Cardinals had to go for offense to get back in the game. That’s when the déjà vu started to simmer and the feel of that night in October 2012 when Wainwright started a playoff game in Washington, fell behind 6-0, and then had one of the best views as the Cardinals rallied to win and eliminate the Nationals.

Wainwright deadpanned after that playoff game that without him a comeback like that would never have been possible.

Sign of the times: Despite being No. 1 nationally, Cards have lost nearly half their TV households from six seasons ago.

Through tears, Mike Shildt thanks Cardinals organization and mentors, acknowledges but does not detail 'differences'

Cardinals fired Shildt, after three consecutive years in the playoffs, on Thursday due to what the team said was a 'philosophical difference,' and officials said it was up to him to reveal those.

Two out, pressure’s on: After firing his second homegrown, hand-picked manager, Mozeliak’s next choice a defining one for Cardinals

A winning team with returning stars had momentum building for 2022 before the sudden dismissal of manager Shildt allowed frustrations, questions to surface.

Here's why Carter Hawkins’ background in player development — and a 5-hour dinner conversation — made him Jed Hoyer’s choice as the new Chicago Cubs general manager.

Kindred: Bob Gibson a four-inning pitcher? He would be in Baseball 2021, and that’s a lot of bull(pens)

Bob Gibson could have pitched in any era of Major League Baseball. His talent and tenacity were transcendent.

BOSTON (AP) — Red Sox starter Eduardo Rodríguez walked off the mound with a six-run lead and a message for Carlos Correa and the rest of the Houston Astros:

Here are the highlights from our Monday chat with Post-Dispatch readers.

NBA struggles during 1950s, begins its rise later in decade

A career in the NBA seemed such an uncertainty as the 1950s arrived that Bob Cousy considered driving school a better option than playing for a team he didn’t even know how to find on a map.

In three full seasons as manager, Mike Shildt led the Cardinals to a postseason berth each year. His firing comes a week after team expressed confidence in coaching staff.

LEADING OFF: Closer to starter, Scherzer lined up for Game 1

A look at what's happening around the majors today: