Heyward’s seven seasons with the organization will end after this season when the Cubs release him with one year remaining on his contract. His numbers — .245 average, .323 on-base percentage and 85 OPS+ in 744 games — aren’t reflective of the talent and production it takes to land the eight-year, $184 million megadeal he signed before the 2016 season.

And yet without Heyward and his famous rain-delay speech during Game 7 of the World Series, the Cubs’ title drought might still be ongoing. But at times his contract represented to fans the organization’s inability in the years since in failing to recapture that 2016 magic, a culmination in which the front office committed to a rebuild last year.

Heyward spoke Thursday for the first time since President Jed Hoyer announced last month that the sides would part ways before the contract ends. Heyward knows how his long-term deal might be viewed.

“I feel like I’m a very fortunate person to be in a select group of players that earned bad contracts because there’s a lot of bad contracts out there, if that’s how we’re looking at it,” Heyward said. “But to be able to show the value of myself as a person, and probably like one of the toughest times I’ve had on the field and off the field in 2016. But to still show I’m here for the team, to still play defense the way I play defense, run the bases and just to step in and step up multiple times when I was needed to be who I am, to be Jason Heyward, like, we still got to a ring and it took every bit of that from me, it took that group.

Heyward was not surprised by the Cubs’ decision to release him after the season. He understands where the organization is at and the need to get looks at other players.

“I appreciate they’re real, I appreciate being able to have that,” Heyward said. “It’s tough when you don’t have those things, showing up for any job or living life, if people were kind of blowing smoke and not keeping it real with you.

“That’s something that people don’t always understand is how you handle failure. There’s a lot of accolades throughout my career, a lot of special things happen here with this team. A lot of failure too. It’s not always easy to deal with, but there’s been a lot of good things that have come my way from a lot of people expressing that to me, and I feel like that comes from how I’ve handled everything.”

Thirteen years into his major-league career, Heyward does not envision his departure from the Cubs as the end. He wants to play somewhere next season but added “plans don’t always go as you hope.” It will depend on which teams are interested and the role they envision for Heyward. He might be willing to sign a minor-league deal with an invitation to big-league camp because the World Baseball Classic in March could help create an extended look with more at-bats available during spring training while players are involved in the tournament.

“I wish I can make a decision right now as far as what’s going to happen,” Heyward said, “but I know that’s not realistic.”

Hoyer expressed future interest in bringing Heyward back into the organization for a post-playing-career role. Heyward indicated an interest on the ownership side to bridge the gap between the clubhouse and front office, believing things get lost in translation and that he could help keep everyone on the same page.

Heyward’s connection to Chicago goes beyond the statistics and Gold Glove awards he won. His work within the community will leave a lasting impact even after his playing career is over. Heyward plans to keep a home in the city, where his academy is in the process of being built in the North Austin neighborhood. That area is where Heyward also worked with By The Hand Club for Kids to bring an outdoor market in 2020. Heyward’s efforts within the community have earned him multiple honors, including this season as the Cubs’ Roberto Clemente Award nominee.

Manager David Ross, his longtime teammate dating to Heyward’s rookie season with the Atlanta Braves, sees the community investment and work Heyward puts in is a direct reflection of who he is in the clubhouse as a mentor, leader and a quiet, example-setting figure.

What made Heyward great in a Cubs uniform extended behind the scenes. That is a legacy on-field numbers never can tarnish.

“This guy has been blessed with a lot of money, and you don’t hear about it,” Ross said. “You see it invested in others. ... It comes from an unselfish place. It’s not about him. Anybody that’s been able to meet him, you’re getting a smile, you’re getting engagement, whether it’s in the community or a rookie here, he’s invested in people, and I think that’s what it says about him — I don’t know how often those people come around.”

Have the “infield of dreams” with MVP Paul Goldschmidt at first, Tommy Edman at second, Trea Turner at shortstop and Nolan Arenado at third.

Barry Bonds was kept out of Cooperstown via the traditional route, but the Hall of Fame’s doors haven’t completely shut on baseball’s controversial home run king.

Mike Sielski: Man behind ‘Bull Durham’ wants to turn a classic Ted Williams story into a movie. Sign me up.

LOS ANGELES — Former Dodgers star Yasiel Puig has withdrawn from an agreement to plead guilty to a charge of lying to federal investigators in a sports betting probe and has changed his plea to not guilty, his representatives said Wednesday. "I want to clear my name," Puig said in a statement. "I never should have agreed to plead guilty to a crime I did not commit." Under the plea agreement, ...

Study: Caffeine can improve the performance of sprint runners

How the World Cup ball may change soccer forever

How the World Cup ball may change soccer forever 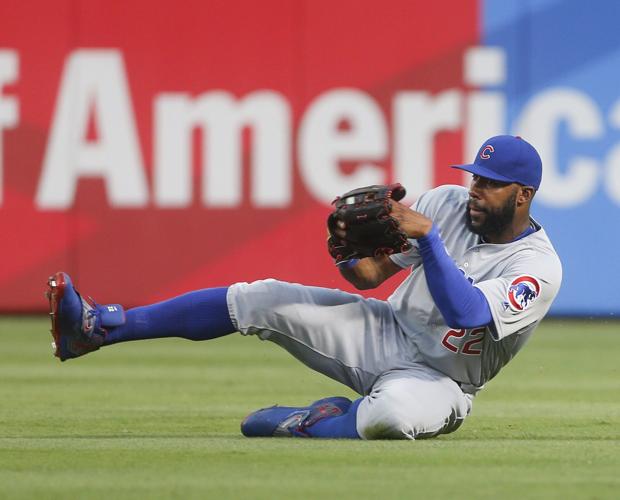 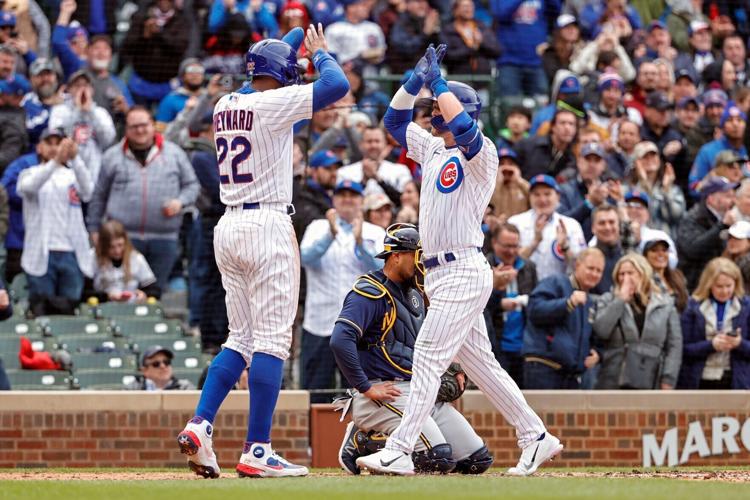 Chicago Cubs' Nico Hoerner, right, celebrates with Jason Heyward, left, after hitting a two-run home run against the Milwaukee Brewers during the fifth inning of a baseball game, Thursday, April 7, 2022, in Chicago.