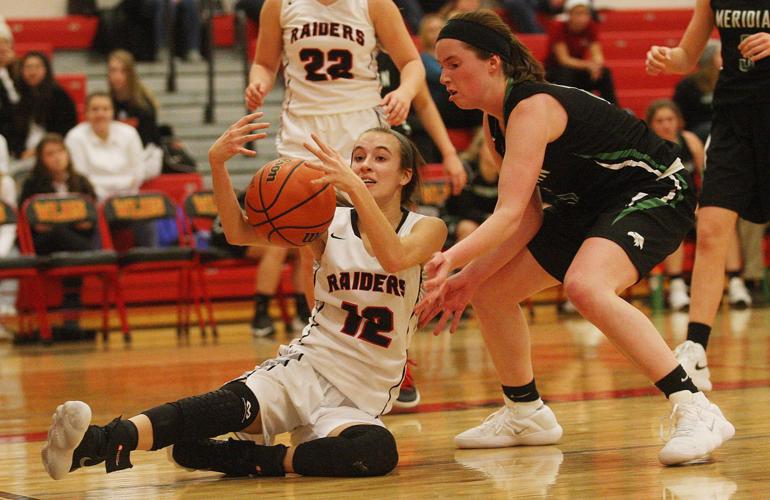 Central A&M’s Haylee Virden (12) gains possession of a loose ball next to Meridian’s Emma Jackson during the first round of the Macon County Girls Basketball Tournament at Warrensburg-Latham High School Wednesday. 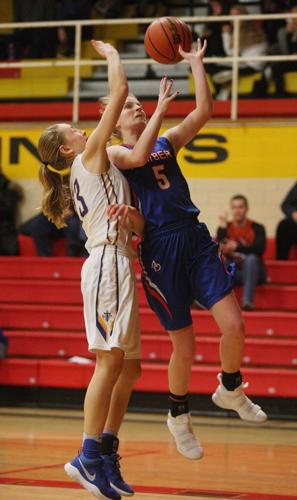 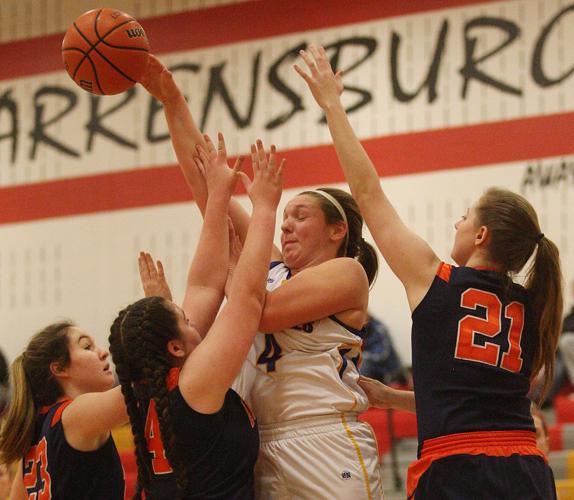 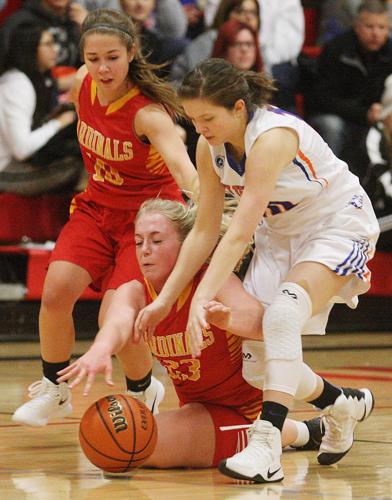 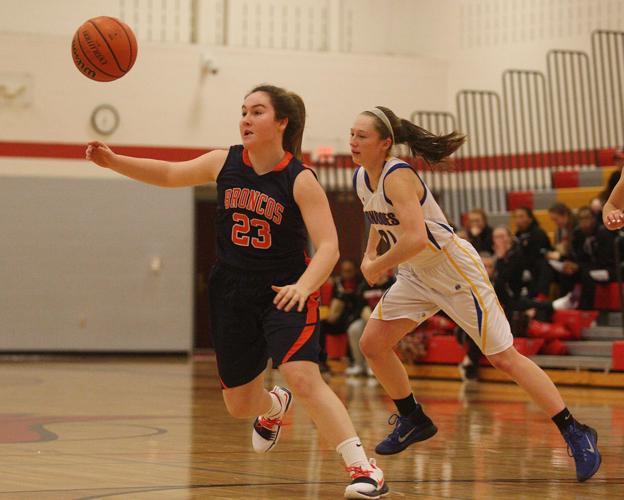 Cerro Gordo-Bement’s Hannah Foran runs after the ball next to Tri-City/ Sangamon Valley’s Anna Sagle during the first round of the Macon County Girls Basketball Tournament at Warrensburg-Latham High School Wednesday January 3, 2017.

WARRENSBURG — There were almost three weeks between games for Central A&M, but there was almost no rust shown.

The top-seeded Raiders (8-6) opened the Macon County girls basketball tournament with a 57-19 win over Meridian.

It all started with practice.

"We had a long break with no games over the holidays, and I thought we had some good practices and brought that effort to the floor tonight," A&M coach Tom Dooley said. "It was an overall team win."

Haylee Virden had a career-high 18 points to lead the Raiders and Taryn Sams scored 19 points.

Meridian didn't score in double figures in any of the four quarters and trailied 29-9 at halftime.

WARRENSBURG -- In its quest for a repeat championship at the Macon County Tournament, Tri-City/Sangamon Valley wasted no time getting out of the gates.

The Tornadoes burst out of the gate to a 31-0 advantage on the way to a first-round win against Cerro Gordo-Bement.

"Our defense set the tone," Tornadoes coach Tony Nika said. "The offense took a few minutes to get going. We did a good job of sticking with our defensive plan and that turned into points."

The Tornadoes led 54-10 after three quarters.

"All around, it was a great team effort," Nika said. "We worked hard and we moved the ball well. We got some good shots. I'm proud of our effort. Hopefully we'll continue rolling and come out with a win tomorrow."

WARRENSBURG -- St. Teresa raced out of the gates Wednesday in its first-round win against Warrensburg-Latham at the Macon County Tournament.

Anna Hooker got St. Teresa started early with all 11 of her points in the first half, including three 3-pointers.

Kenzie Snow scored six of her eight in the first half and Addison Newbon added eight of her own.

WARRENSBURG -- There's always a little rust after the holiday season, but Maroa-Forsyth shook it off in its opening-round win in the Macon County Tournament against Argenta-Oreana.

The Trojans led 34-30 at halftime and slowly built a lead against the Bombers.

Alli Robinson connected on three 3-pointers for the Trojans on her way to a game-high 18 points, Kate Beckemeyer scored 15 and Kaylee Robinson added 11 points.

"It was a typical game that you have coming back from being off for a little bit with trying to get back in the game," Maroa coach Selina Finck said. "Argenta played just as hard. A few things went our way. In the first half, they shot a lot of free throws and we fouled a lot. But in the second half, we turned that to our favor and we were able to get some free throws in.

"It was a huge overall effort by all of my girls."

Maroa plays Central A&M at 6 p.m. today in the high school gym in the semifinal game.

MONTICELLO -- Zanna Myers had to quickly block out her shooting woes.

CHARLESTON — For the sixth year in a row, Charleston and Effingham battled it out at Baker Gym, each trying to clinch the championship title i…

WARRENSBURG -- DaeLin Switzer's ankle had been bothering her for a few games.

Central A&M’s Haylee Virden (12) gains possession of a loose ball next to Meridian’s Emma Jackson during the first round of the Macon County Girls Basketball Tournament at Warrensburg-Latham High School Wednesday.

Cerro Gordo-Bement’s Hannah Foran runs after the ball next to Tri-City/ Sangamon Valley’s Anna Sagle during the first round of the Macon County Girls Basketball Tournament at Warrensburg-Latham High School Wednesday January 3, 2017.