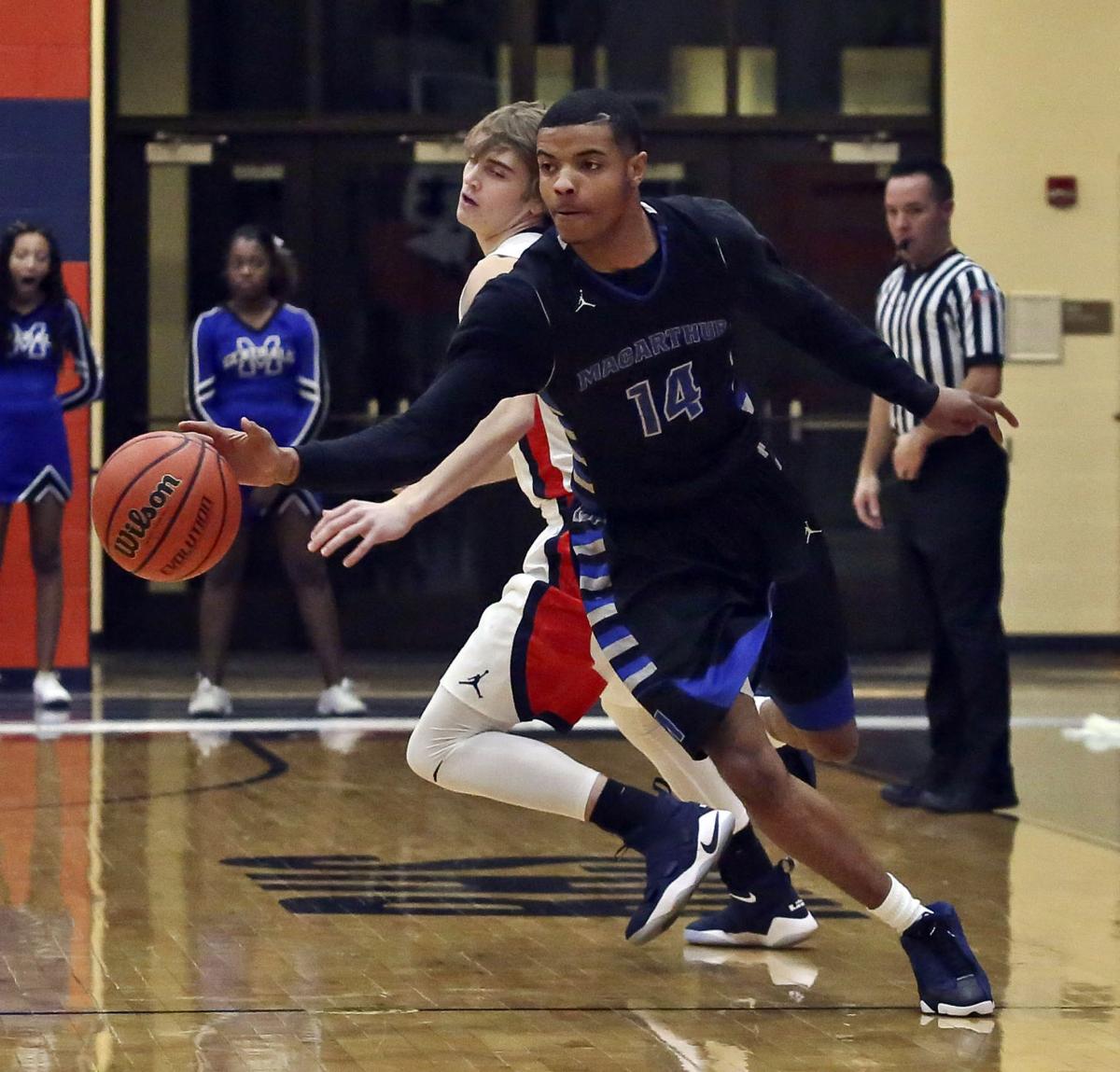 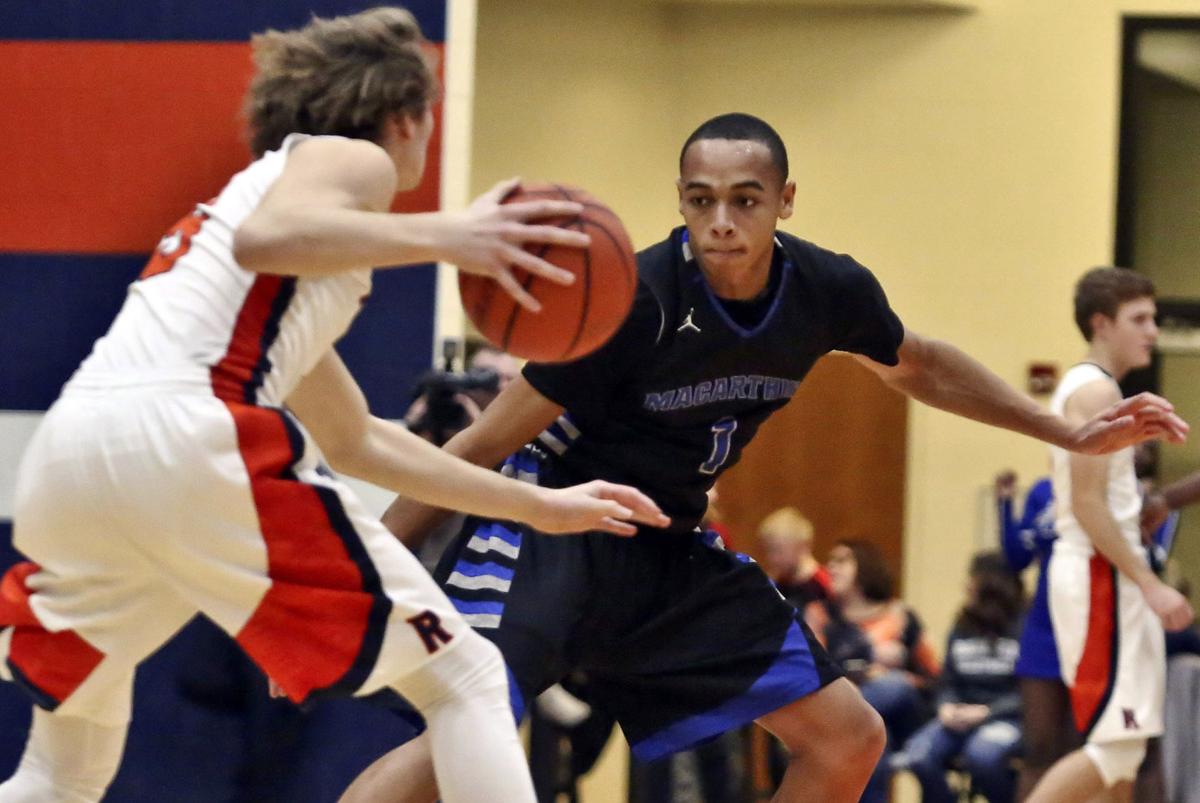 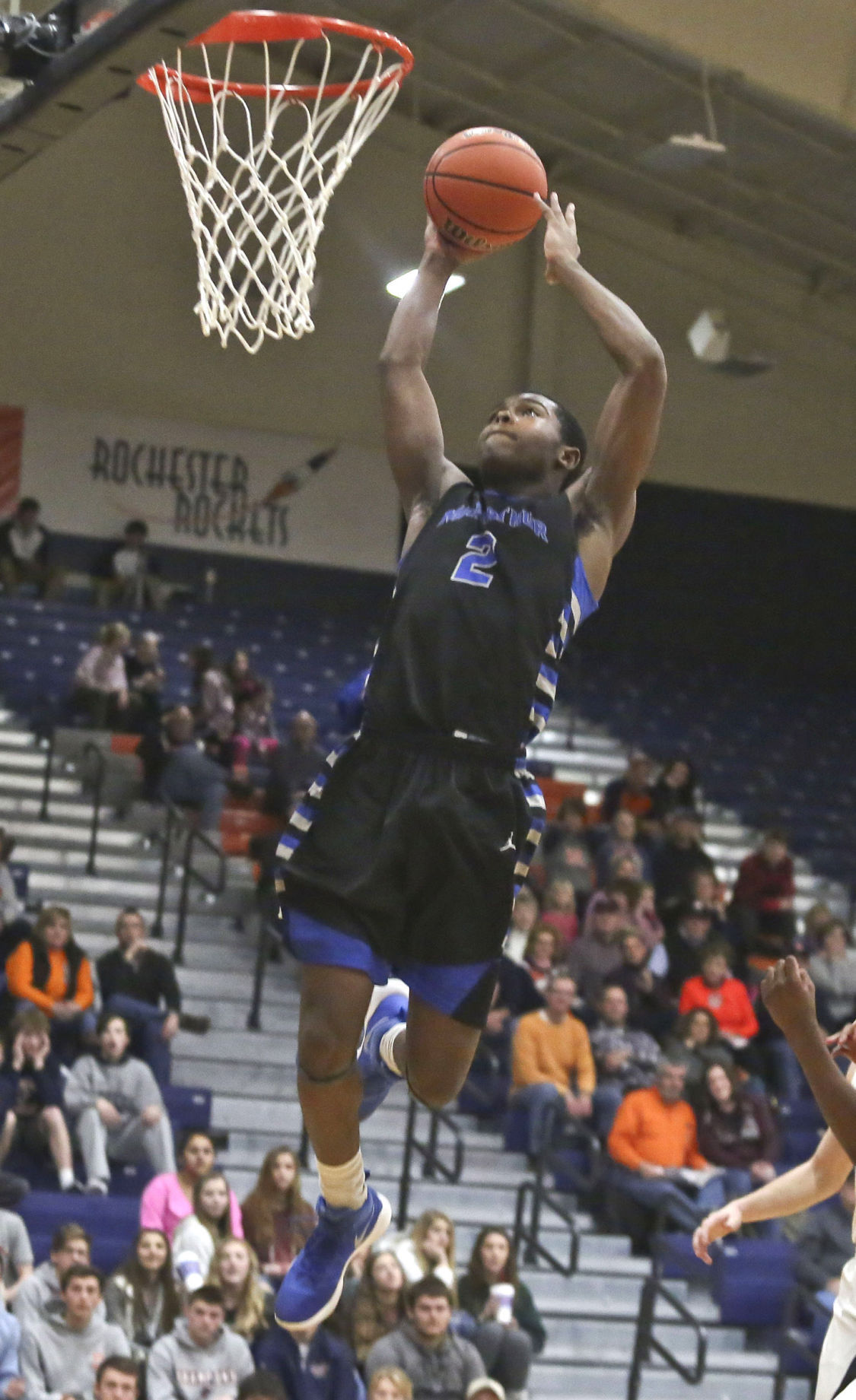 MacArthur's Armon Brummett (2) dunks the ball in the second quarter at Rochester. 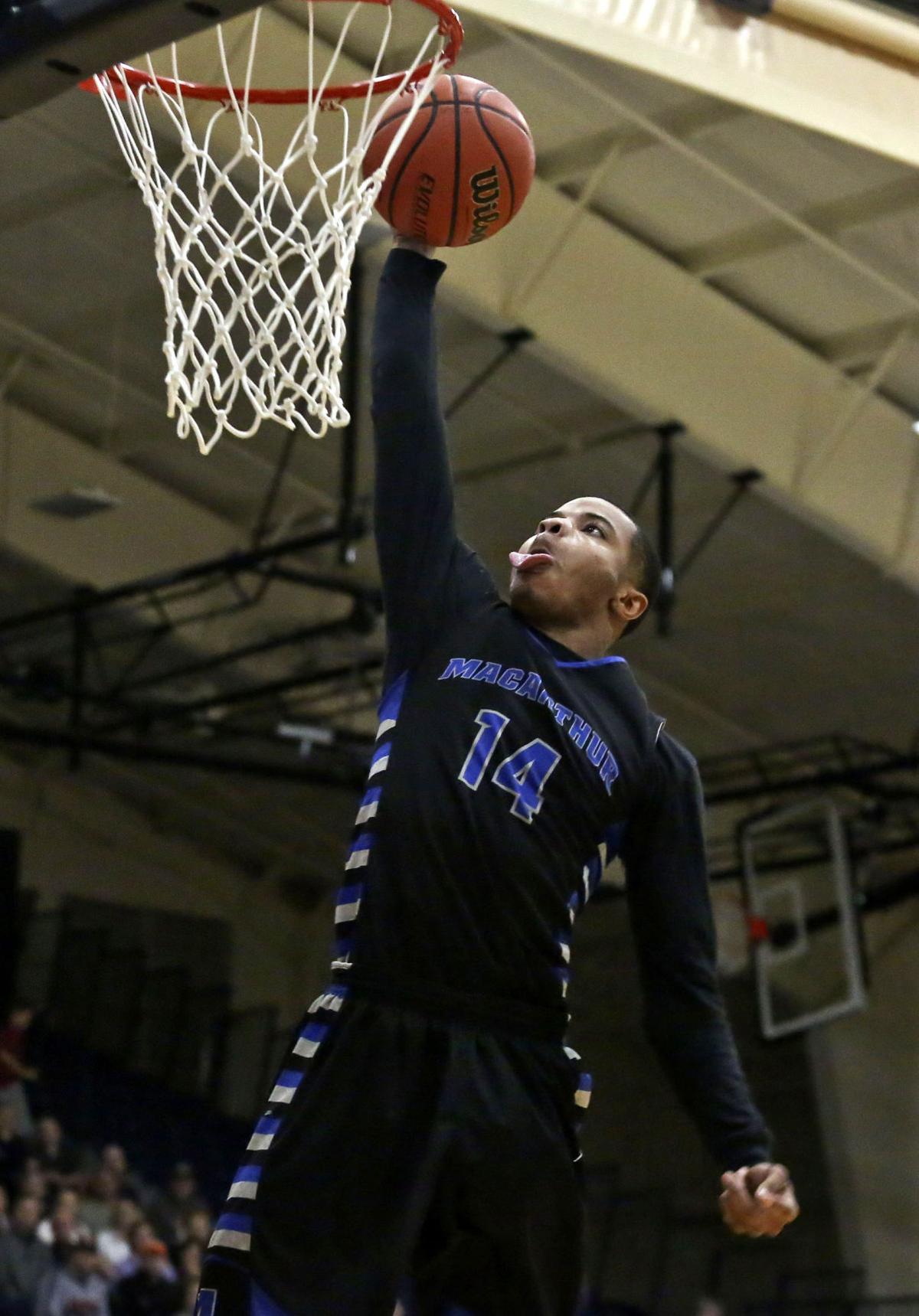 MacArthur's M.J. Thomas-Bond (14) dunks the ball in the second quarter against Rochester. 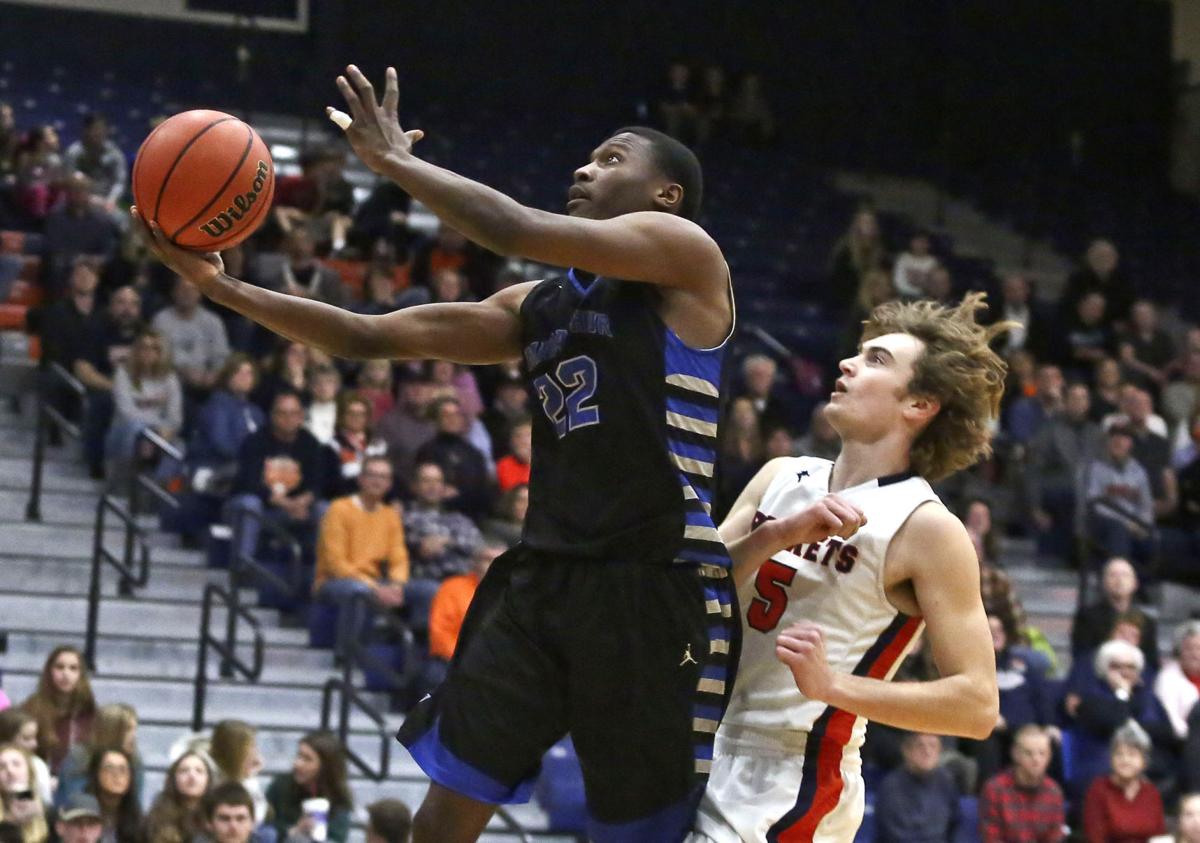 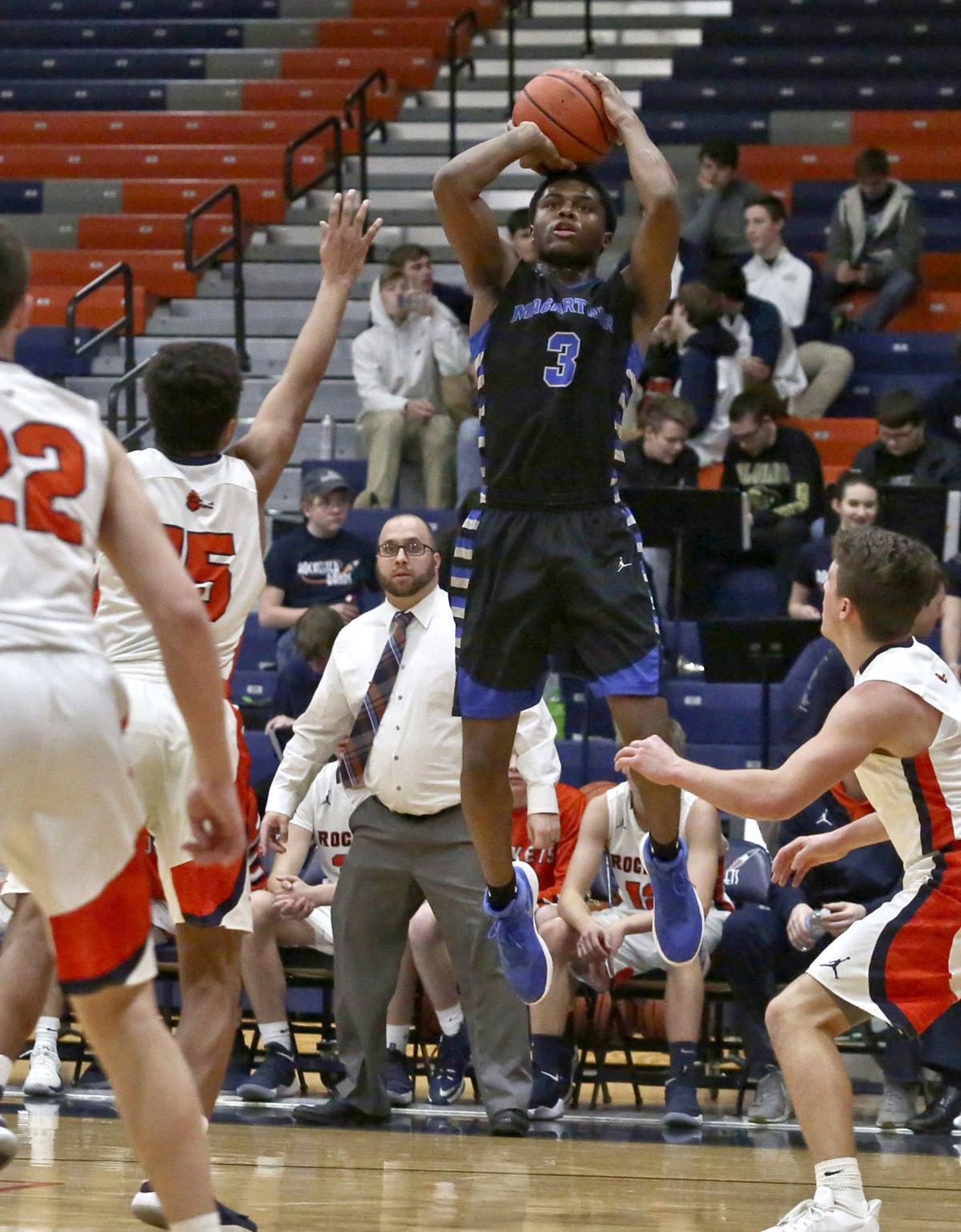 ROCHESTER -- No one on the MacArthur boys basketball team forgot about the near collapse at the hands of Rochester on Dec. 12.

In that game, the Generals led by as many as 17 points before the Rockets stormed back to nearly upset the Generals.

The Generals opened Friday’s Central State 8 Conference game on a 14-1 run before cruising to an 80-48 win at Rochester.

“They remembered the last time they played them, we were up by 16, 17, then they came back and took the lead and we were in a dogfight to win the basketball game,” MacArthur coach Ron Ingram said. “They didn’t want that to happen tonight, so they came out with a different mindset tonight -- defense.”

Senior Zach Briggs started the pressure at the top, not allowing Rochester (3-15, 1-8) to get into much offensive rhythm. The rest of the Generals followed suit, hoping in passing lanes and getting out into transition.

Briggs finished with 10 points and two rebounds for the Generals, who were able to empty their entire bench as early as the second quarter before spelling starters back in throughout the third quarter.

“He’s that guy who people forget about,” Ingram said of Briggs. “He does a lot of positive things. There are some games where he won’t score a point, but if you look at the box score, he’ll have five assists, three blocks and some key rebounds. He’s that guy for us. Zach does a lot of things for us that takes a lot of pressure off other guys.”

Those two play each other in the Springfield City Tournament Saturday night, giving one team its first conference loss.

“We’ve been working on our defensive pressure in practice and we just tried to bring it out on them,” Briggs said. “In practice we’ve been getting better to keep our intensity up so we can get farther in regionals. That’s all we’ve been thinking about.

Armon Brummett led MacArthur with 17 points and seven rebounds, including scoring 12 of the team’s first 14 points and a transition alley-oop from his brother, Armon Brummett (12 points) to end the first half.

Both started with defense.

“Sometimes it’s trying to get your head above water and keep treading and fighting and keep it close at times,” Rochester coach David Maciejewski said. “All of a sudden you look up and there’s times where all of a sudden it’s a 10-point run. That’s where their press and their attack kind of gets you into at times.”

When the starters went to the bench, M.J. Thomas-Bond took over off the bench. He finished with seven points including a thunderous transition dunk to start the second quarter run and a ferocious put-back dunk in the third quarter.

The 6-foot-1 senior has been a curious case since transferring back to MacArthur after playing at LSA.

Ingram has been moving the chess pieces with Thomas-Bond on defense, trying to find his best home. Thomas-Bond started in the post, then moved to the wing before landing on the ball.

“He kind of wants me everywhere,” Thomas-Bond said. “Coach said I show more enthusiasm on the ball than I do in the post, but I feel like I can play in the post also. He’s got plays everywhere.

“This gave me a bigger role on our team and it’s made me better.”

Midway through the fourth quarter the Generals had to inbound the ball under the hoop. The reserves were in by this point and most looked to Ingram to call out a play.

Instead, Amir Brummett stood behind the coach and directed the team with his hand.

In fact, in most games, Amir or Armon are the loudest cheerleaders.

Then there is Thomas-Bond who takes great pride in bringing energy to the team.

“Coach always tells me when I come off the bench or even when I start, to bring the same enthusiasm as I do in practice,' Thomas-Bond said. "I’m a hothead, not in a negative way, but I bring energy to bring the best out of other people. When I’m working hard, I get other people to work hard."

Amir stands under the hoop and lobs and alley-oop that either Armon or another General flushes home or lays in.

There's been very few stops for that play yet.

While all eyes are on the talented senior class of the Generals, Ingram was able to display a bit of youth that will be on the floor next season.

DECATUR — Antonio Austin Jr. never saw his dad play football, but on Friday he got to see how much his dad’s accomplishments meant to the Deca…

Stories are what makes this job worth it.

MacArthur holds on against Eisenhower in city game

DECATUR -- If that was the last game Armon Brummett plays at Eisenhower, the MacArthur senior went out in style.

MacArthur's Armon Brummett (2) dunks the ball in the second quarter at Rochester.

MacArthur's M.J. Thomas-Bond (14) dunks the ball in the second quarter against Rochester.