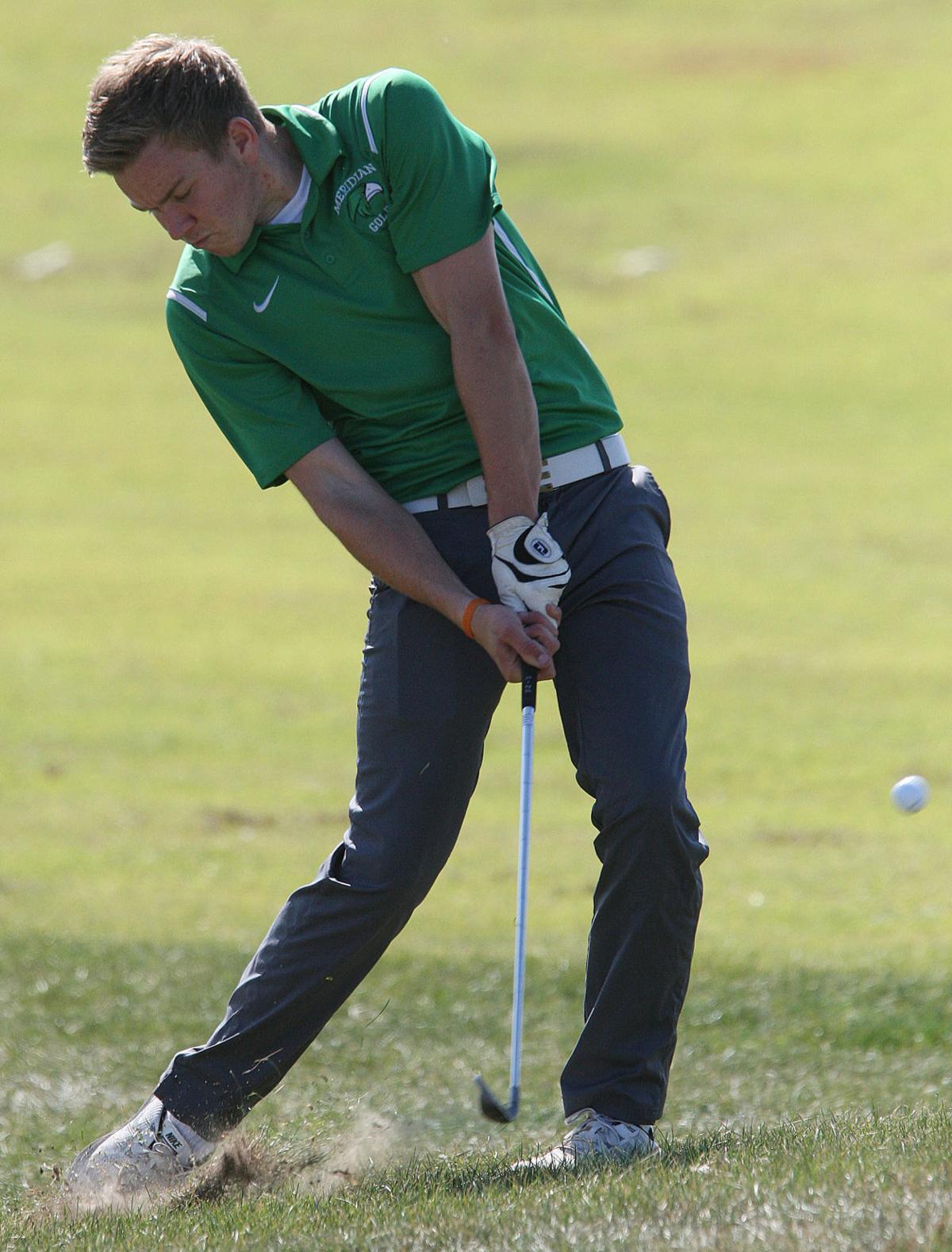 Meridian’s Cole Babcock hits onto the green on No. 5 during the boys golf regional in Windsor. Online gallery at herald-review.com/gallery 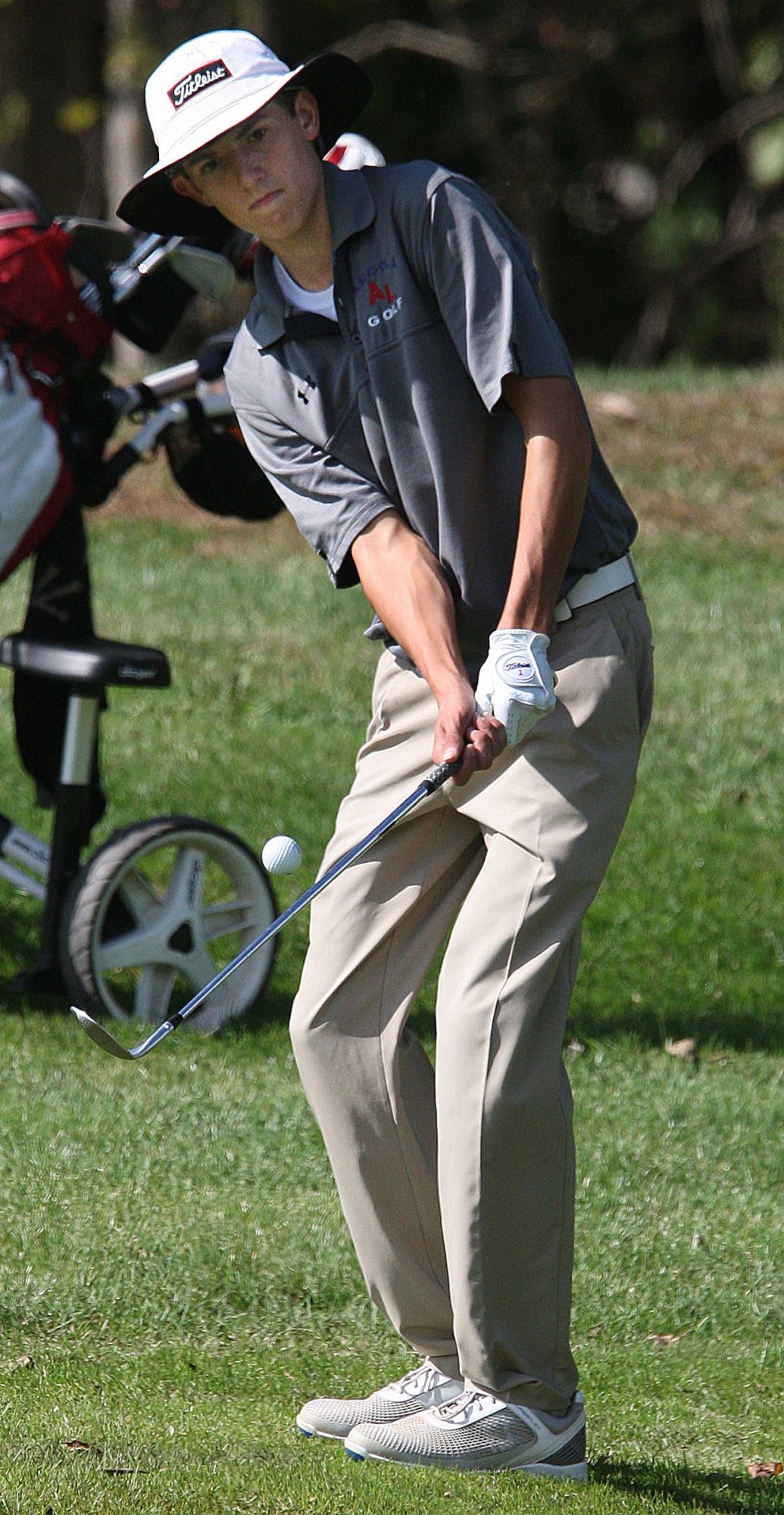 Arcola’s Clayton Miller chips onto the green at No. 10 during the boys golf regional at Fox Prairie Golf Course on Tuesday. Miller was the day's medalist with a 76. Online gallery at herald-review.com/gallery

WINDSOR -- It was a familiar scene for St. Teresa's Cayden Brilley on Tuesday at Fox Prairie Golf Course for the Winsdor Regional.

"I knew he was going to beat me because I've been playing him since I was 10 or 11 years old and he always beats me," said Brilley, who shot a 79 and advanced to sectionals as an individual. "But I thought I was going to end up in fourth or fifth, so I'm happy with second."

Miller was happy to see his old buddy Brilley in second.

"I've been playing with him for a really long time -- since we were like 10 years old," said Miller, who came in at 76. "He's a pretty cool kid. I've beaten him a few times, but he's gotten a lot better. It's been fun to watch him grow as a player."

One of Brilley's few triumphs vs. Miller came last year at the Normal Sectional, when Brilley shot an 80 to advance to state as a freshman and Miller shot an 83 to miss out.

"I kind of blew up," Miller said. "That was a lesson learned. I think about it sometimes -- I try to use it as motivation. I know I'm better than what I showed in that sectional."

Miller set the tone early on Tuesday and stayed consistent.

"I settled in and made a few pars early," Miller said. "I knew I needed to make pars today and I played pretty well. I've played this course a lot and knew where my ball needed to be."

Brilley struggled at times with his irons, but made up for it with his putter.

"I putted well -- there were a couple holes I saved with some putts," Brilley said. "I had some bad holes, but I was also able to get a couple of birdies, so that helped a lot."

Miller would have been headed to a playoff for medalist honors had it not been for a scorecard mistake by Neoga's Luke Baker.

Baker finished 30th at state as a sophomore and 26th last year, but won't get the chance to play at state this year after getting disqualified for signing his scorecard with an incorrect score.

"His official scorecard that had his name on it had a four on hole 18, and when I looked at the other scorecard of the golfer with him, he had (Baker) down for a five on 18," Windsor/Stewardson-Strasburg coach and regional tournament director Scott Dow said. "I called his coach over and asked him what Luke got on 18 and he said a five. I called Luke over and asked him and he said a five.

"I told him his official scorecard has a four and he'd signed for it. They were upset, which I would be, too. I've had a player get disqualified his senior year for the exact same reason.

"I feel horrible, but there was nothing I could do. He's a senior and it's his responsibility to check his official card and make sure it's right. Those are the rules of golf."

Sullivan won a team regional title in golf for the first time since 1994.

It's been a banner stretch run for Sullivan, which won its first conference title since 1993 with its Central Illinois Conference Tournament win.

The Sullivan golf resurgence is being led by freshmen. Caiden Ellis tied for sixth overall with an 81 and Leighton Burcham -- normally the team's No. 6 golfer -- had the team's second-best score at 87.

"Caiden has been our number one all year long and always comes through in the clutch for us," Sullivan coach Ben Richter said. "(Burcham) played so well today. He really impressed me."

Arcola finished with the same score as Sullivan (346) but lost on the tiebreaker -- each team's fifth scorer. But the Riders and Okaw Valley, third with 362, also advanced to sectionals Monday at El Paso Golf Club.

No one close to Chappell

PANA – As one golf coach was keeping tabs with his players, he asked his top player if she was keeping up with Lauren Chappell.

FORSYTH -- Dylan Flock's wedge game was always enough to make him a good varsity player, even when he couldn't drive a ball more than 170 yards.

Meridian’s Cole Babcock hits onto the green on No. 5 during the boys golf regional in Windsor. Online gallery at herald-review.com/gallery

Arcola’s Clayton Miller chips onto the green at No. 10 during the boys golf regional at Fox Prairie Golf Course on Tuesday. Miller was the day's medalist with a 76. Online gallery at herald-review.com/gallery