Illinois football game against No. 4 Ohio State canceled because of positive COVID-19 tests within Buckeyes program
0 comments
Share this
{{featured_button_text}}
1 of 2 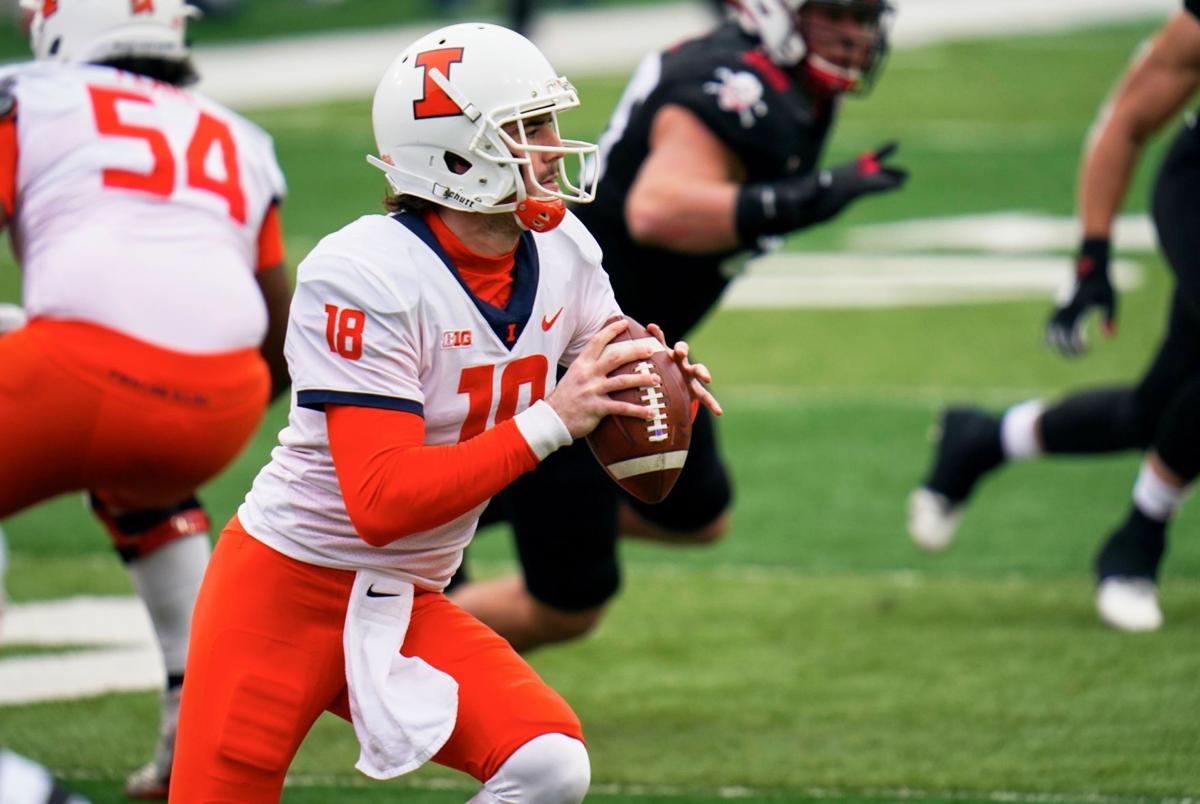 Illinois quarterback Brandon Peters (18) looks to throw against Nebraska last week. Peters had his best game in an Illini uniform after a three-game absence. 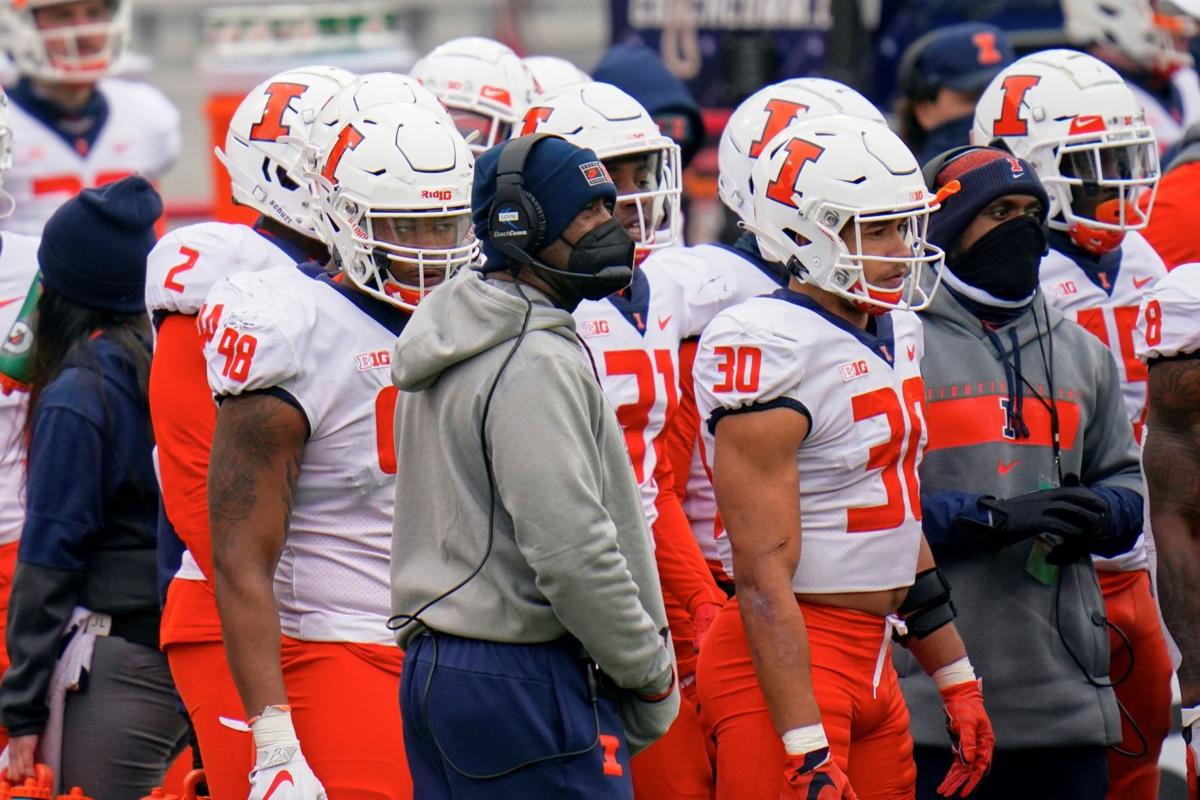 CHAMPAIGN — On the eve of its biggest game of the year, the Illinois football team found out it wouldn't be playing on Saturday.

Illinois was scheduled to play No. 4 Ohio State, but late Friday it was announced the game had been canceled because of "an elevated number of COVID-19 tests within the Ohio State program." It's the the first time this season that a game involving Illinois has been canceled. The game will not be made up and will be considered a "no contest" by the Big Ten Conference. It's the second Big Ten game this week that has been canceled, joining Wisconsin-Minnesota.

“We are certainly disappointed that (Saturday's) game against Ohio State was cancelled,” said Illinois head coach Lovie Smith in a statement. “In these uncertain times, and having seen similar situations around the nation, we have always been aware that this could occur to us as well. All of us in collegiate athletics place the health and safety of our student-athletes at the highest level. We hope the Ohio State players and staff who have contracted the COVID virus recover quickly so they can continue their season.”

Illinois is scheduled to host Iowa Dec. 5 in Champaign.

"Wow ... We was really looking forward to this one," Illinois linebacker Milo Eifler wrote in a tweet.

News began surfacing earlier in the week from Columbus, Ohio, that there were positive tests within the program and on Friday the university announced that head coach Ryan Day was one of the positive tests.

The Ohio State Department of Athletics has paused all team-related football activities. The decision to cancel and pause was made jointly by Director of Athletics Gene Smith, University President Kristina M. Johnson, head team physician Dr. Jim Borchers and in consultation with the Big Ten Conference. Further positive tests were discovered Friday afternoon.

“We have continued to experience an increase in positive tests over the course of this week,” Gene Smith said. “The health, safety and well-being of our student-athlete is our main concern, and our decisions on their welfare will continue to be guided by our medical staff.”

This is the second game Ohio State has lost because of COVID. The Buckeyes were scheduled to play Maryland on Nov. 14, but that game was canceled because of positive tests within the Maryland program.

Ohio State resume its team activities when its medical staff determines it is safe to do so based on protocols established by the Big Ten Conference.

Illinois has had its own COVID-related hurdles this season. Starting quarterback Brandon Peters and tight end Griffin Moore each tested positive for COVID on Oct. 29 and missed three weeks, which set Illinois into a contact tracing web that sidelined a handful of other players for two weeks. The Illini were without their first and second string quarterbacks against Purdue and Minnesota — both losses.

Peters returned last week in a rout of Nebraska and played the best game of his college career and helped Illinois (2-3) to back-to-back wins in the process.

“Our conversation is that we want to build on last week’s game," Lovie Smith said on Monday. "We did a lot of good things right last week. I thought we made improvement from the previous game. That’s what we want to do this week. We had an excellent week of practice last week and it carried over to the game. You start with that and with us doing everything we possibly can to put us in a position to play our best game."

“Ohio State has been one of the best teams in our conference for a long period of time. We knew they were on the schedule, we knew the exposure a game like this would bring to our program and we’ll be ready to go."

Wow... We was looking forward to this one

After disappointment of canceled game, Illinois is focusing on game against No. 24 Iowa

The doubt that began creeping into Tony Adams' mind wasn't necessarily a good thing, but he couldn't help himself.

Watch now: The season has been 'frustrating' and 'challenging' for Illinois quarterback Brandon Peters

Calling the Big Ten's football season bumpy probably gives it too much credit.

Watch now: What to watch for when Illinois hosts No. 19 Iowa

Illinois offense roars, then sputters in loss to No. 19 Iowa

Illinois looked like it had exorcised the demons of Iowa past, ready to finally knock off a team that had thoroughly walloped the Illini for the last four seasons.

After loss to Iowa, Illinois football still trying to get over the hump with rivalry game against Northwestern looming

Three years ago, Illinois simply didn't have the talent on the roster to consistently compete in the Big Ten.

'For him, it's muscle memory,' Jake Hansen excels at taking the ball away

Watch now: Lovie Smith on rivalry games: 'There’s a team you want to beat a little bit more than everybody else'

Want Lovie Smith to open up? Bring up Big Sandy, Texas, and the high school football team he starred on in the mid 1970s.

What to watch for when Illinois travels to No. 14 Northwestern

CHAMPAIGN — The biggest news out of the Big Ten this week was Ohio State, with five games under its belt, being allowed to play in the Big Ten…

Lovie Smith has been relieved as the head coach at Illinois, the program announced on Sunday.

Who could replace Lovie Smith as Illinois football coach? Here are 9 candidates

CHAMPAIGN — Rod Smith's voice was low as he trudged through questions about his team's final game of what has been a unique season.

Occasionally Owen Carney Jr. will peek his head around to see if the rest of the defense cracks a smile.

National Letters of Intent are arriving on the first day of the early signing period in the Class of 2021.

CHAMPAIGN — In a normal year, the Illinois football team wouldn't be in this kind of situation. As the story goes, this isn't at all a normal year.

What to watch for in Illinois' season finale at Penn State

Perhaps clarity will finally exist at the end of this awkward week and questions about the future of Illinois football — more specifically who will be the head coach — will finally have answers.

Josh Whitman can go into meetings with candidates for the vacant Illinois football head coach position armed with an attractive sales pitch after firing Lovie Smith.

Illinois quarterback Brandon Peters (18) looks to throw against Nebraska last week. Peters had his best game in an Illini uniform after a three-game absence.