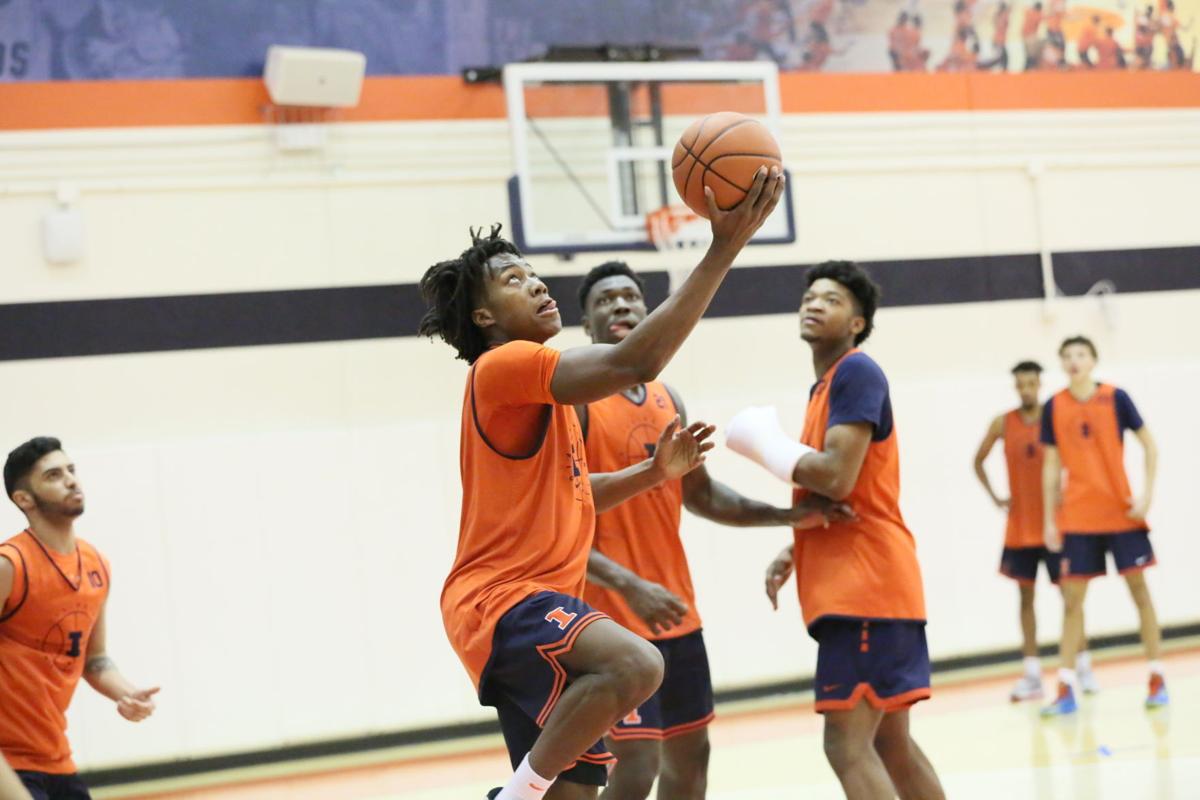 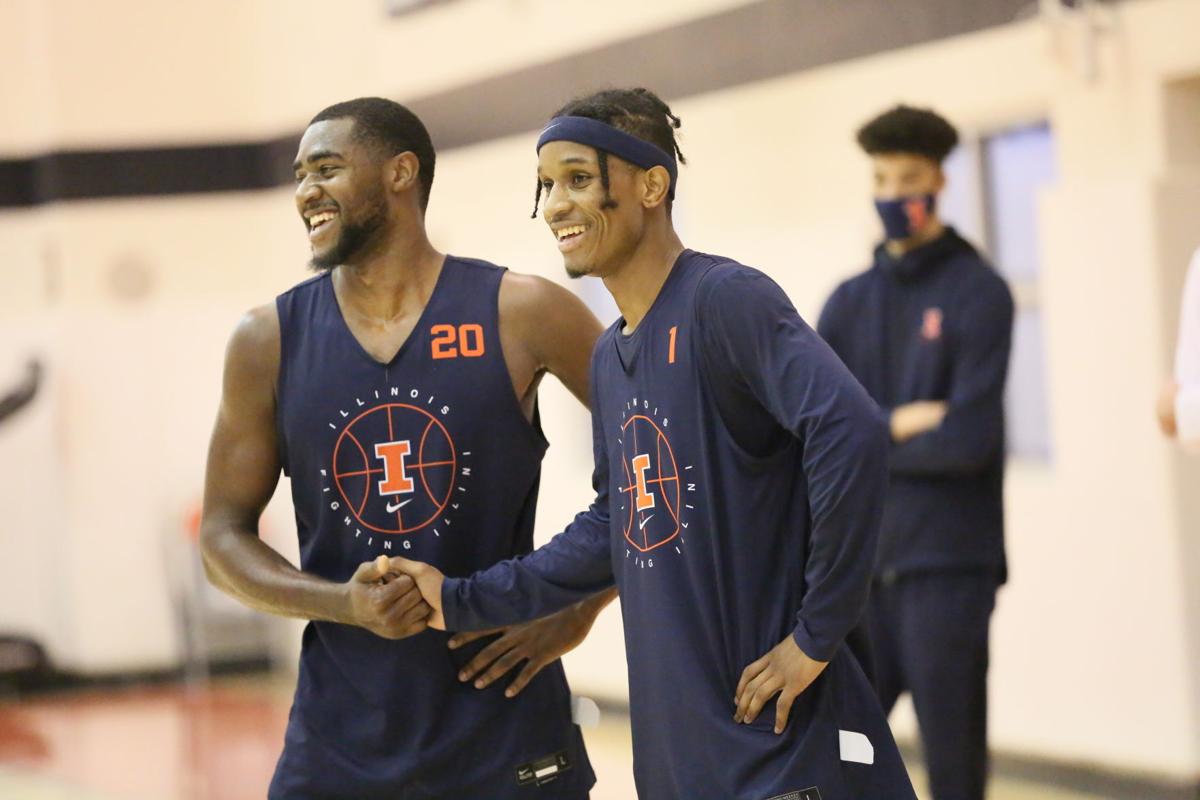 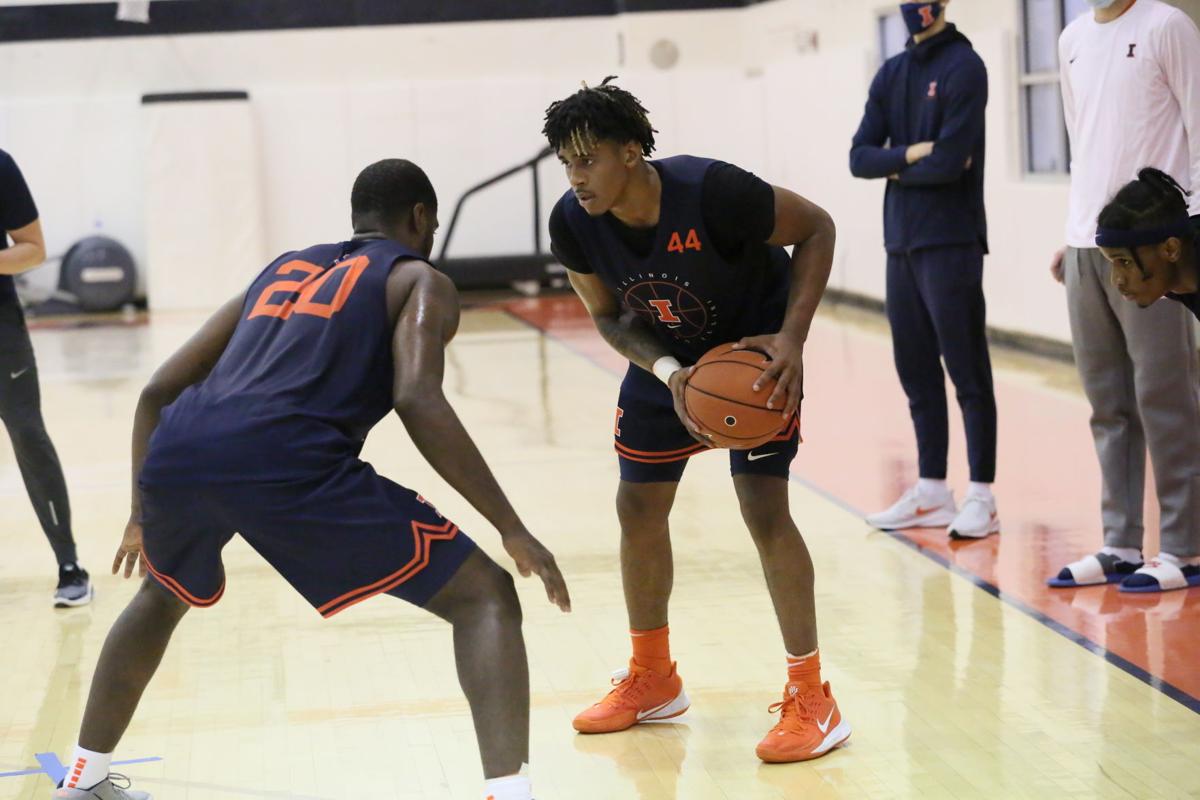 CHAMPAIGN — By this point, you've probably heard about the expectations heaped upon the Illinois men's basketball team.

Pre-season hype, an expected run deep into the NCAA Tournament, the whole nine yards. Head coach Brad Underwood has certainly heard them and, no, the team's not running from them but they're also not getting caught up in all the hype.

The team had its first practice of the season on Wednesday even if a schedule hasn't been announced. Wednesday was much of an extension of the individual workouts and small group workouts of the summer as the team gradually evolved from eight-hour weeks to 12-hour weeks to 20-hour weeks.

“There’s nothing like the start of practice," Underwood said. "It still makes the hair on the back of your neck stand up. It’s exciting. You’d like to bundle all of that enthusiasm up and spread it out through the course of a season. Our guys were excited and were bouncing off the walls ready to get after it."

Underwood said the Illini weren't missing anyone because of COVID-19 protocols — though he said the team has dealt with COVID situations and quarantines up to this point. Illinois was without three scholarship players: Austin Hutcherson (back), Benjamin Bosmans-Verdonk (foot) and Lincoln native Jermaine Hamlin (hand) to injuries.

“We’re still dealing with some issues with Austin’s back so he has not practiced or done anything with us this spring," Underwood said. "He has another examination coming up to see what’s going on there."

Bosmans-Verdonk missed all but nine games last season with a foot injury. Underwood said the injury is on the same foot but in a different location.

“Ben had a little flare up with his foot," Underwood said. "He was in a boot and is out now. He’s just going back through the process of reengaging back into practice."

Hamlin had hand surgery that stemmed from an injury earlier during quarantine. He's wearing a club on his hand and is engaged in some parts of practice and will be back in a "short time," Underwood said.

Underwood said there was a COVID-related "hiccup" in August when students returned to campus. At no point, though, did Illinois halt practices. Underwood cited the university's testing protocols as a reason to push through with practices.

“When we had issues, we’ve chosen not to top our program," he said. "The reality is, we understand that cases are going to happen. We’ve dealt with the quarantine. ... We’re back now and all healthy. I think the one thing that’s happened is we’ve learned and it’s been extremely educational or all of our athletes to know what quarantine looks like and feels like. It’s not fun, it’s miserable."

COVID will be a story for teams across the country this season — much as it currently is for football — as teams try to play sports amid a pandemic. The Big Ten protocols mandate a player sit out 21 days and undergo testing for myocardits following a positive test. In basketball, that can range from six to eight games, depending on the schedule. Football teams have postponed games around the country, and the SEC has been hit particularly hard this week.

Underwood encouraged his team to keep tight circles. Players aren't using the locker room at the Ubben Basketball Practice Facility; instead, tables surround the court that act as lockers. Just recently up to three or four players have been permitted to shower in the facility. Meals are "grab and go" and further precautions around pregame meals could be changed as the season nears.

COVID conversations, Underwood said, are at the forefront of talks and it's mentioned daily.

Still, Underwood said he has no doubt the season will begin on Nov. 25 and that the NCAA Tournament will be played this year after being canceled last year. When the season was canceled, Underwood said Illinois felt good about how it was playing at the end of last season. The key? Pick up where they left off.

Wednesday was officially the first day.

DCC Marketing, Archer Daniels Midland Co. and the Herald & Review are co-sponsors of the event.

A leader isn't made just by having a title. It is your actions that will make you one.

Though much of the basketball schedule remains in the unknown, CBS Sports college basketball insider Jon Rothstein dropped a big bit of news on Thursday.

The Braggin' Rights game will stay in the state of Missouri.

No. 8 Illinois makes multi-team event, game vs. No. 2 Baylor official

Takeaways from the (almost) full schedule for the No. 8-ranked Illinois men's basketball team

With just eight days until the college basketball season, the Illinois men's basketball team has a full schedule. Well, almost.

As Brandon Lieb was doing running drills during practice, he looked around and realized the moment.

'We would have beaten anybody in the country that day.' Inside Illinois' last practice of last season at Hinkle Fieldhouse.

Eight months after it all stopped, after the sports world was put on hold and the fight against an invisible enemy began, college basketball i…

The college basketball world is already off to a helter-skelter start because of the COVID-19 pandemic.

No. 8 Illinois opens season with sky-high expectations on Wednesday against North Carolina A&T

While Dee and Deron were dancing their way through March in 2005, Brad Underwood was in his first season as the head coach at Daytona Beach (Fla.) Community College after a nine-year stint at Western Illinois University.

No. 8 Illinois opens the season with a dominating win over North Carolina A&T

The only celebration in the State Farm Center when Trent Frazier drilled in a 3-pointer from the right wing late in the second half came from his teammates spaced out behind him on the bench.

Freshman Adam Miller dazzles in debut for No. 8 Illinois

With a stat sheet in his hand, Ayo Dosunmu read off the shooting numbers that Adam Miller had just posted not 30 minutes prior.