Fear and anxiety spike in virus hot spots across US; 'crisis stage' in El Paso as hospitals fill up

CHAMPAIGN — After more than a calendar year in Champaign, Josh Imatorbhebhe is plenty settled into his surroundings.

He's got a couple of favorite food options including Merry Ann's Diner near Memorial Stadium and he can't go wrong with a stop to Culver's every now and again. For the most part, he's pretty low-key away from school and the football field but he's used to things around town.

“I’m extremely acquainted with it and I really feel like this is home to me," he said on Wednesday in a Zoom interview with reports.

On the field, he made an immediate impact for an Illinois passing game that needed a makeover. After joining Illinois as a graduate transfer from USC prior to last season, Imatorbhebhe was Illinois' surest receiver before missing the last three games of the season because of injury.

His nine touchdowns in his first year as an Illini were the second most in program history behind only David Williams and Brandon Lloyd, who each had 10. Imatorbhebhe also led Illinois with 33 receptions and 634 yards. He had a big touchdown reception to spark a stunning upset against then-No. 6 Wisconsin and was key in Illinois mounting the largest comeback in program history at Michigan State, including a leaping grab on fourth-and-17 on the game-winning drive.

The big plays were certainly needed last year en route to an appearance in the Redbox Bowl, but Imatorbhebhe wants more than that.

“Just somebody who is consistent, somebody who is dominant and isn’t just flashes of brilliance," he said. "(People) called me like, ‘Big Play Bhebhe,’ it sounds good but I don’t want to just be known for big plays. I want to be known for reliability, consistency. That’s definitely part of my game that I’ve been working on. I’m excited to show everybody that that's a different part of me now."

He spent the first few months of the pandemic in California before returning to his home state of Georgia, then heading to Champaign. When he returned to campus in June, he returned as one of the leaders on an Illinois team that is proudly claiming high expectations for the shortened season, which begins on Friday, Oct. 23 at Camp Randall Stadium against Wisconsin.

"Stepping into a leadership role isn't something I want to take lightly," he said. "The guys usually follow what I have to say because they know last year I helped our teams win some games. It’s something that I’m stepping in and embracing more and more and understanding the weight that I am tasked with carrying just to help our receiver room be as successful as possible."

Imatorbhebhe says the group has been competitive, and that competitiveness has been compounded by what figures to be a standout group of tight ends in Daniel Barker, Luke Ford and Daniel Imatorbhebhe, who joined Illinois as a graduate transfer from USC this offseason.

It's all intertwined into an offense that arguably has the most weapons in years. In just more than a week that offense will walk into an empty Camp Randall Stadium with Imatorbhebhe leading the charge of the receivers group having worked on his own game during the pandemic.

“I’ve really had a lot of time to perfect the mindset that I feel like I want to have going out throughout this season," Imatorbhebhe said. "I’m extremely excited to finally show kind of the new product that is me."

The Illinois football team finally opens the season on Friday. Catch up on the stories here.

Before college athletes were sent home, facility doors locked and the sports world was upended by COVID-19, Lovie Smith and Owen Carney Jr. hunkered in front of a screen and studied.

Illinois football to open season on Friday, Oct. 23 at No. 16 Wisconsin

For the third straight schedule release, the Illinois football team is scheduled to open the season under the lights.

Watch now: How the Illinois football team is using the transfer market to round out the roster

When Brandon Peters entered his name in the transfer portal after spending his first three collegiate seasons at the University of Michigan, P…

Watch now: Inside Trevon Sidney's motivation as he worked back from injury

Trevon Sidney motioned to his leg, the canvas that will become the latest painting of his life experience.

There's a confidence that radiates off Isaiah Gay — even into a front-facing computer camera and through a Zoom screen.

The Hawaiian shirt with the top two buttons undone and the sunglasses on inside should have been a giveaway for what was to come — if only.

During spring football before last season, Milo Eifler stood on the Memorial Stadium filed and took a moment to reflect on where he'd been.

To say the Illinois football team was shorthanded at wide receiver at the end of last season would be an understatement.

Every now and again, Derrick Smith said, he still throws on some boxing gloves and swings away.

Until the pads come on, it's hard to get a gauge of everyone on the football team.

When Nate Hobbs was spending time on the scout team in the fall of 2018, he began to realize change was needed.

Watch now: Illinois football back at training camp; will wear pads on Wednesday

Things started to look much more like fall on Monday inside Memorial Stadium.

Watch now: After waiting for his time, Illinois running back Jakari Norwood is ready to shine

Sometimes one line of affirmation has a way of sticking to the psyche like glue.

Watch now: With a game against Wisconsin nearing, why Illinois kicker James McCourt goes back to 'the kick'

Finding the appropriate relationship to have with a season-saving, last-second kick that shocked the college football world can be a delicate dance.

Watch now: What quarterback Brandon Peters wants to improve on in his second year at Illinois

Exactly 11 days before last season started, Lovie Smith made what felt like the inevitable call.

Watch now: From Rockford to Peoria, Illinois has a homegrown starting offensive line

To read it from left to right reads like a map with no particular rhyme or reason: Rockford, Peoria, Hinsdale, Chicago, Mount Prospect.

After briefly letting the word slip, Jamal Woods quickly caught himself for a split-second correction.

Messages include Black Lives Matter, I Fight Against Racism, Together, Equality, or United.

Watch now: What to watch for when Illinois travels to No. 14 Wisconsin

What are your predictions for Illinois' season-opening game against Wisconsin?

Watch now: Illinois offense sputters in 45-7 loss to No. 14 Wisconsin

Miles Smith was searching out linebackers for the Class of 2019 and stumbled on Tarique Barnes out of Memphis. Smith liked Barnes' film, particularly his speed.

Watch now: Wagner: A confident buildup to another letdown for Illinois — this time because of the offense

Confidence and arrogance is a fine line, one best walked like you're walking blindfolded and backwards on a tight rope across the Grand Canyon. 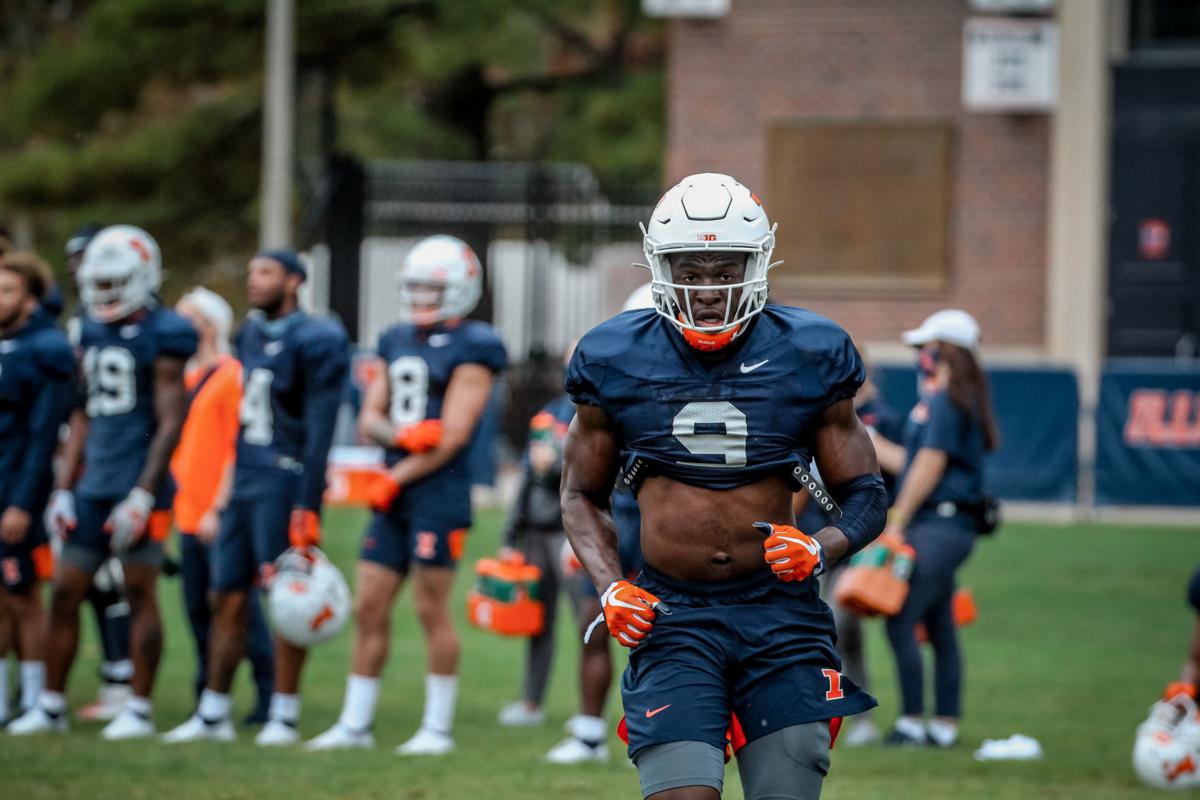