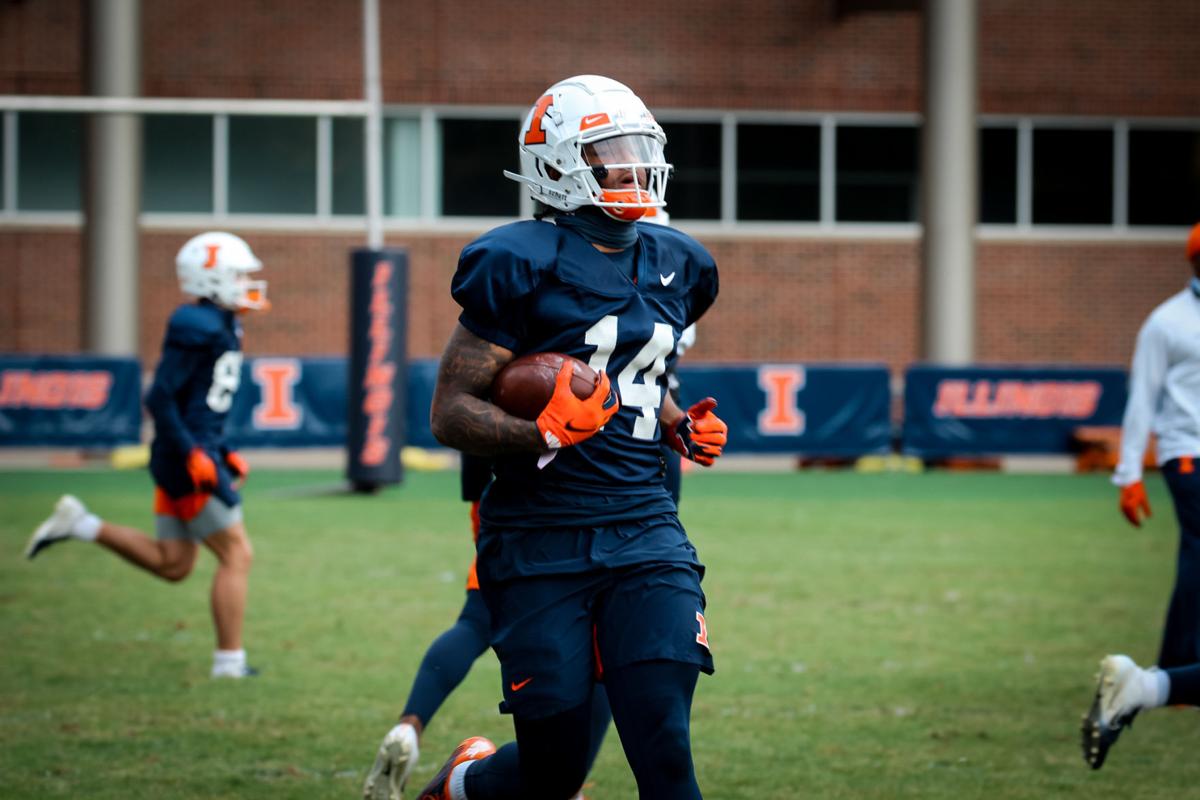 After transferring from the University of Miami, wide receiver Brian Hightower could make an immediate impact on the Illini this year. 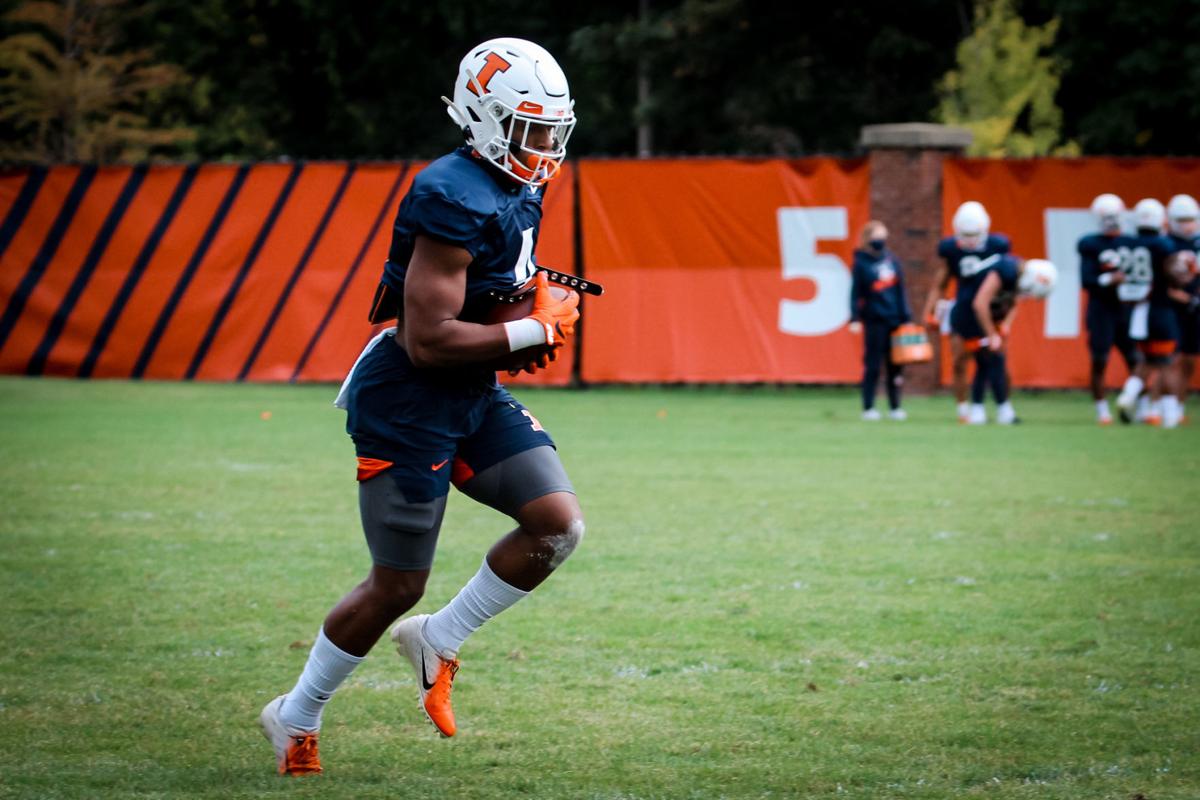 CHAMPAIGN — To say the Illinois football team was shorthanded at wide receiver at the end of last season would be an understatement.

For the regular season finale against Northwestern and the Redbox Bowl against California, the Illini were without leading receiver Josh Imatorbhebhe, Ricky Smalling and Trevon Sidney.

Washington was a freshman who showed flashes in games, finishing with 11 catches for 132 yards. Navarro was a revelation after initially coming to Illinois as a walk-on from Valparaiso. He was the team's second-leading receiver with 27 catches for 345 yards and two touchdowns. Reams and Davis had been buried on the depth chart and Davis went between three positions during his career.

On paper, things look much different almost 10 months later. With the addition of transfers and players getting healthy, Illinois looks to have a deep group of receivers. Imatorbhebhe is back along with Navarro, Sidney and Washington. Though Smalling is no longer with the program, Illinois landed transfers from Brian Hightower (Miami), Khmari Thompson (Missouri) and Desmond Dan (New Mexico State).

In a season with nine games in nine weeks, depth is as important as ever.

"Not only do major injuries come into play, but soft-tissue injuries," Rod Smith said. "All those little things that are nagging that are a couple week injuries sometimes. We’ve got to have bodies ready to play. It’s going to be a positive thing, I think, for us. I feel a lot better about our wide receiver room today than before those guys transferred in here to give us depth. I think we’ve got some decent wide receivers. We need more. We need more pieces. That was able to address that a little bit."

Imatorbhebhe made an immediate impact after transferring from USC with 33 receptions for 634 yards and nine touchdowns. He and quarterback Brandon Peters developed chemistry immediately. Sidney was also a USC transfer and started three games as a slot receiver before having season-ending surgery. He missed the final nine games of the season. Navarro, a junior, and Washington, a sophomore also return.

“Through last year, we gained some experience and we have to use 2019 as a springboard and learn from our mistakes, most importantly and continue to work hard," Navarro said. "Everyday we’ve got to go out on the practice field knowing we’ve got to get one day better and it has to continue on throughout the whole season. Experience is big and just recognizing situations, recognizing coverage and reacting, executing a little bit better."

Hightower, a 6-foot-3, 220-pound junior, transferred from Miami in the offseason and received a waiver for immediate eligibility. He played in 18 games at Miami with 12 receptions for 148 yards and was a four-star prospect and ranked the No. 36 wide receiver in the nation from IMG Academy in Florida.

Like Hightower, Thompson received a waiver for immediate eligibility after transferring from Missouri. He played in three games as a true freshman in 2018 and missed all of last season with a torn meniscus. He's 6-foot-1, 210 pounds and has plenty of speed to burn after running track at Missouri.

“Brian had played, we had seen him," Lovie Smith said. "We thought he’d be a big body with sure hands and compete hard on every down and that’s what we’ve seen from him. ... Khmari Thompson, the same thing. Khmari has a little bit more juice, they’re different players which is unique. They’re different players. ... We like the skill set with both of these guys have brought to the mix so far."

There's also a mix of size and speed on the roster that will allow, in theory, for Rod Smith to take advantage of most defenses, regardless of what type of defense they're playing. Some games might necessitate a bigger receiver like an Imatorbhebhe or Hightower to go up and snag the ball. Others might mean players in the slot like Sidney, Navarro, Thompson or Cumby get involved.

The Illinois football team finally opens the season on Friday. Catch up on the stories here.

TUPPER: The return of Big Ten football is the social and cultural medicine that will lift spirits

Having football in the fall gives us a needed sense of normalcy.

Watch now: Illinois football back at training camp; will wear pads on Wednesday

Things started to look much more like fall on Monday inside Memorial Stadium.

When Nate Hobbs was spending time on the scout team in the fall of 2018, he began to realize change was needed.

Every now and again, Derrick Smith said, he still throws on some boxing gloves and swings away.

Until the pads come on, it's hard to get a gauge of everyone on the football team.

At first there was a slight smirk on Chase Brown's face that, within seconds, manifested itself into a full-blown grin.

Every now and again, a memory will pop up on Mike Epstein's cell phone to remind him of where he's been, or more aptly, where he isn't now.

Watch now: 'It's time to take the next step' Illinois defensive secondary has talent and experience

For the better part of the last three years the defense of the Illinois football team has been gashed here or gutted there. It certainly wasn't entirely surprising considering the youth movement that head coach Lovie Smith put in place in one of the country's top conferences, but each stumbling block created a callous.

Illinois will be on the road in three of the first five weeks.

Watch now: How golf has infiltrated the Illinois football team with a scouting report from James McCourt

Golf has always been a part of James McCourt's life. He grew up in Ireland, where it's quite a popular sport, and moved to golf-happy Florida before high school.

Watch now: 'Like a little kid on Christmas': Illinois football players celebrate the return of the Big Ten

It was as if Blake Hayes awoke the morning of Dec. 25, ran downstairs and saw everything waiting for him under the tree. Well, as close as that feeling cam come on Sept. 16 in Champaign when temperatures hovered around 70 without a hint of snow on the ground.

Watch now: University of Illinois Athletic Director Josh Whitman: 'This is a day we can smile' about the return of Big Ten football

On Aug. 11, Lovie Smith sat in his office and looked into his computer screen for a press conference — life in 2020 during a global pandemic —  and tried to answer questions the best he could following the postponement of the Big Ten football season.

In a non-COVID world, the streets of Melbourne, Australia would be full with runners traversing 18.8 kilometres through town and near the beach with music playing throughout.

During spring football before last season, Milo Eifler stood on the Memorial Stadium filed and took a moment to reflect on where he'd been.

The dirt-colored turf infield was recently installed and Decatur Public School Board Vice President Courtney Carson said project developer Tony Romano and his crew should have the field completed early next month.

There's a confidence that radiates off Isaiah Gay — even into a front-facing computer camera and through a Zoom screen.

The Hawaiian shirt with the top two buttons undone and the sunglasses on inside should have been a giveaway for what was to come — if only.

Watch now: Inside Trevon Sidney's motivation as he worked back from injury

Trevon Sidney motioned to his leg, the canvas that will become the latest painting of his life experience.

Three weeks ago we didn't think Big Ten football would be played in 2020, but now, in two weeks, the Big Ten season will begin. Oct. 24 will b…

Watch now: How the Illinois football team is using the transfer market to round out the roster

When Brandon Peters entered his name in the transfer portal after spending his first three collegiate seasons at the University of Michigan, P…

Illinois football to open season on Friday, Oct. 23 at No. 16 Wisconsin

For the third straight schedule release, the Illinois football team is scheduled to open the season under the lights.

Before college athletes were sent home, facility doors locked and the sports world was upended by COVID-19, Lovie Smith and Owen Carney Jr. hunkered in front of a screen and studied.

Watch now: Illinois' Josh Imatorbhebhe excited to show 'new product that is me'

After more than a calendar year in Champaign, Josh Imatorbhebhe is plenty settled into his surroundings.

Watch now: After waiting for his time, Illinois running back Jakari Norwood is ready to shine

Sometimes one line of affirmation has a way of sticking to the psyche like glue.

Watch now: With a game against Wisconsin nearing, why Illinois kicker James McCourt goes back to 'the kick'

Finding the appropriate relationship to have with a season-saving, last-second kick that shocked the college football world can be a delicate dance.

Watch now: What quarterback Brandon Peters wants to improve on in his second year at Illinois

Exactly 11 days before last season started, Lovie Smith made what felt like the inevitable call.

Watch now: From Rockford to Peoria, Illinois has a homegrown starting offensive line

To read it from left to right reads like a map with no particular rhyme or reason: Rockford, Peoria, Hinsdale, Chicago, Mount Prospect.

After briefly letting the word slip, Jamal Woods quickly caught himself for a split-second correction.

Messages include Black Lives Matter, I Fight Against Racism, Together, Equality, or United.

Watch now: What to watch for when Illinois travels to No. 14 Wisconsin

What are your predictions for Illinois' season-opening game against Wisconsin?

Watch now: Illinois offense sputters in 45-7 loss to No. 14 Wisconsin

After transferring from the University of Miami, wide receiver Brian Hightower could make an immediate impact on the Illini this year.