CHAMPAIGN — Kofi Cockburn scored 18 points and grabbed 17 rebounds to lead the University of Illinois past The Citadel 85-57 on Wednesday night.

It was the fourth double-double of the young season for Cockburn, a muscular, 7-foot freshman. Cockburn's 17 rebounds broke a school single-game record for a freshman, previously held by Deon Thomas (16). Cockburn is the only freshman in the country with four double-doubles through five games.

"He just gets better each game," said Illinois coach Brad Underwood. "He's starting to understand that the ball doesn't just come to you, you have to go get it."

Ayo Dosunmu and Giorgi Bezhanishvili each added 16 points for Illinois (3-1).

Cockburn had eight points and 11 rebounds as Illinois led 34-20 at the half. His presence under the basket wasn't an accident.

"Coach tells me every game that rebounding should be my goal, my mindset," Cockburn said.

Bezhanishvili, a 6-9 power forward who grew accustomed to being the big man last year, has not only adapted well to his new role but has become best friends with Cockburn off the court.

"I'm not satisfied with Kofi tonight," Bezhanishvili said, grinning. "I tell him that every game, though. He needs to go out next game and get 20 rebounds. He can do better."

Underwood praised both men, but noted he was especially pleased with Bezhanishvili's play.

"I think tonight was Giorgi's best night all around this season," Underwood said. "He's adapted to his new role beautifully. Have you seen his passing? His outside shooting? He was outstanding tonight."

The Citadel: The Bulldogs, known for their outside shooting, didn't find the 3-point range until the second half. The Citadel was 10 of 38 from beyond the arc for the game, but only hit three in the first half.

The Bulldogs beat Southeast Missouri on Tuesday for their first win of the year, but lost leading scorer Hayden Brown with an apparent hamstring injury.

"I have to give a lot of respect to The Citadel," Bezhanishvili said. "They played and played hard last night. That's not easy."

Up 40-20 with 17:56 left in the game, Cockburn brought the crowd to its feet with a monster one-handed dunk.

On the next offensive play for Illinois, the Illini showed their versatility when Trent Frazier nailed a 3-pointer after a takeaway.

The Citadel: Travels to Marist on Saturday.

Illinois: Hosts Hampton on Saturday, the third of five-games at the State Farm Center.

CHAMPAIGN — Trent Frazier found himself coming back to the word early and often: Kills.

CHAMPAIGN — Andre Curbelo has moxie on the basketball court — a charisma that can't be neatly or perfectly bundled up in one description. It a…

Illinois guard Ayo Dosunmu (11) calls a play against Nicholls State in the overtime on Tuesday at the State Farm Center.More photos at www.herald-review.com 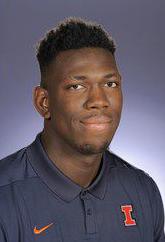