Illinois athletic director Josh Whitman warned everyone in attendance Wednesday at his annual media roundtable that his opening statement would be long and thorough.

He kept his word.

Whitman spoke for roughly 58 minutes before answering follow-up questions for about another hour in the Hall of Fame Room at the Bielfeldt Athletics Administration Building. He used notes to pivot through a wide range of topics, but started with none other than COVID-19.

"We could talk for hours about the coronavirus and how that has affected the Illinois program," Whitman said. "For the first time in my experience and the first time that I can remember, winning and losing really took a backseat."

Whitman said the Illinois athletic department shifted its focus to the overall safety and well-being of its athletes, coaches, staff and even media members. Then, the next goal was simply "having a chance to compete at all."

He said that the Illini were "within a whisker" of not competing, as evidenced by the Big Ten initially canceling the 2020 football season before eventually reversing its decision.

Despite the difficult circumstances, which have affected the entire world to some degree, Whitman said he is proud of the way the Illinois athletic department maneuvered during the height of the pandemic. He gave a lot of credit to the Illinois SHIELD program that developed a saliva-based COVID-19 test that "changed the game" and allowed the university to test more frequently and get results more quickly.

Here are some of the Illinois athletic department's coronavirus stats, according to Josh Whitman:

Whitman added that Illinois often identified positive cases of COVID-19 through its saliva-based PCR test a few days before a positive test came back from Big Ten's antigen protocols. He said this gave the athletic program even more time to proactively remove someone from team activities.

"It was actually before they were technically contagious, and so that allowed us to really nip the situations in the bud and avoid wide-spreading of the virus amongst team and teammates," Whitman said. "Again, that was a tremendous, tremendous benefit of being associated with the University of Illinois during this pandemic."

'Encouraged' but not required

Now that COVID-19 vaccines are available, Whitman said he and the Illinois athletic department fully back "the science" and hope that all student-athletes, coaches and support staff get vaccinated as soon as possible.

However, the Illini will not require anyone to get vaccinated and does not have a target threshold for its student-athletes.

"We've encouraged our student-athletes to do it, but we're not going to ask them why they're not. If they choose not to, that's their personal choice," Whitman said. " ... We feel strongly that getting vaccinated is the right thing for them to do, and we think that there is a strong set of incentives for them to do it in terms of their testing cadence and quarantine and masking and all of that stuff."

According to Whitman, about 68% of Illinois' student-athletes are fully vaccinated and about 75% are partially vaccinated. Likewise, about 90% of the athletic department's staff is fully vaccinated. He expects the numbers for both groups to increase this summer.

"Those who are not vaccinated will continue to have an experience that looks and feels a lot like last year," Whitman said. "They'll be tested on a very frequent basis, likely daily, for those who are involved in high-contact sports. They'll be required to continue to mask, distance, and they'll be eligible to be quarantined if they do have close contact with somebody who contracts the virus."

The Illinois athletic department took a big financial hit because of COVID-19 during the 2020-21 fiscal year, which ends June 30, Whitman said. He estimates the Illini will suffer a net loss of $12 to $18 million.

However, the fallout wasn't as large as he and the athletic department anticipated. Prior to the resumption of the 2020 Big Ten football season, they projected that Illinois would lose "in excess of $40 million" in a worst-case scenario.

"(Our net loss) compares favorably to many of our peer institutions across the country," Whitman said. "We are working with the campus to of course finalize that number and then determine a long-term financial recovery plan."

The Illini were still able to make some money through television rights, though their main source of income, ticket sales, was suspended for the entire 2020-21 sports season. Whitman said Illinois suffered a $22 million revenue loss, which includes $14 million in gate receipts.

"They were all family members, guests who were on pass lists from coaches and student-athletes, and so that just gives you a sense when we talk about losing $14 million in gate receipts, when you think about the difference in the attendance numbers, they can be pretty staggering," Whitman said.

Whitman added that he expects to see a reduction in Big Ten distributions by about $10 million and reduction in premium seating revenue of about $4 million, which includes $2 million in sponsorship, licensing and annual fund revenue.

To offset some of these losses, Whitman said there were about 40 members of the athletic department staff that moved over to on-campus positions last year so that their salaries were paid through the university "for a period of months." Additionally, staff members who earn more than $80,000 a year were asked to reduce their salary and of the 87 who were eligible, 86 agreed to do so. There have also been hiring freezes and staff separation agreements that have saved the department millions of dollars.

On the other hand, Whitman mentioned that Illinois did have some increased expenses because of COVID-19. One of the main expenses was expanded scholarships since the NCAA has allowed athletes to return for another season of eligibility because of the coronavirus pandemic.

Whitman said it cost about $400,000 in extra expenses to bring back spring athletes who had their seasons disrupted in early 2020, and that amount is expected to increase to about $1 million to $1.5 million for fall and winter sports as that extra year of eligibility carries over into 2021-22.

"We're very grateful that we've had donors step up and and fund those expenses," Whitman said. "Those are a cause that have often been close to our donors' heart, the education of our student-athletes, so we found a very willing group of people who were willing to help us with that unexpected expense."

Illinois announced last week that it will return to full capacity for all of its home events during the 2021-22 sports season, and Whitman hopes to hit the ground running with the football season opener against Nebraska on Aug. 28.

That "Week Zero" contest will mark the debut of first-year Illini coach Bret Bielema and could be the first Power Five college football game played in front of a full crowd since the 2019 season. Memorial Stadium seats 60,670 people.

"We have every intent of selling that game out. We want to see a full stadium," Whitman said. "We are thrilled to be hosting the first high-major college football game post pandemic here in the friendly confines of Memorial Stadium against a major opponent."

Whitman also noted that Illinois will continue to move forward with renovations to its baseball, softball, basketball and indoor golf facilities, despite the Illini's significant financial loss caused by COVID-19.

Illinois basketball uniforms through the years

Illinois AD Josh Whitman labeled 2021 as "the most consequential year in the modern history of college sports." The first domino fell Monday with a unanimous decision by the Supreme Court against the NCAA.

On June 16, Illinois athletic director Josh Whitman said COVID-19 vaccines were "encouraged" but not required among student-athletes. A week later, a new policy was announced.

Kofi Cockburn is now in wait and see mode as the 2021 NBA Draft, scheduled for July 29, creeps closer.

Less than a week ago, Eian Pugh was a Cincinnati recruit, a choice he initially made in December 2020. Now, he's staying home. 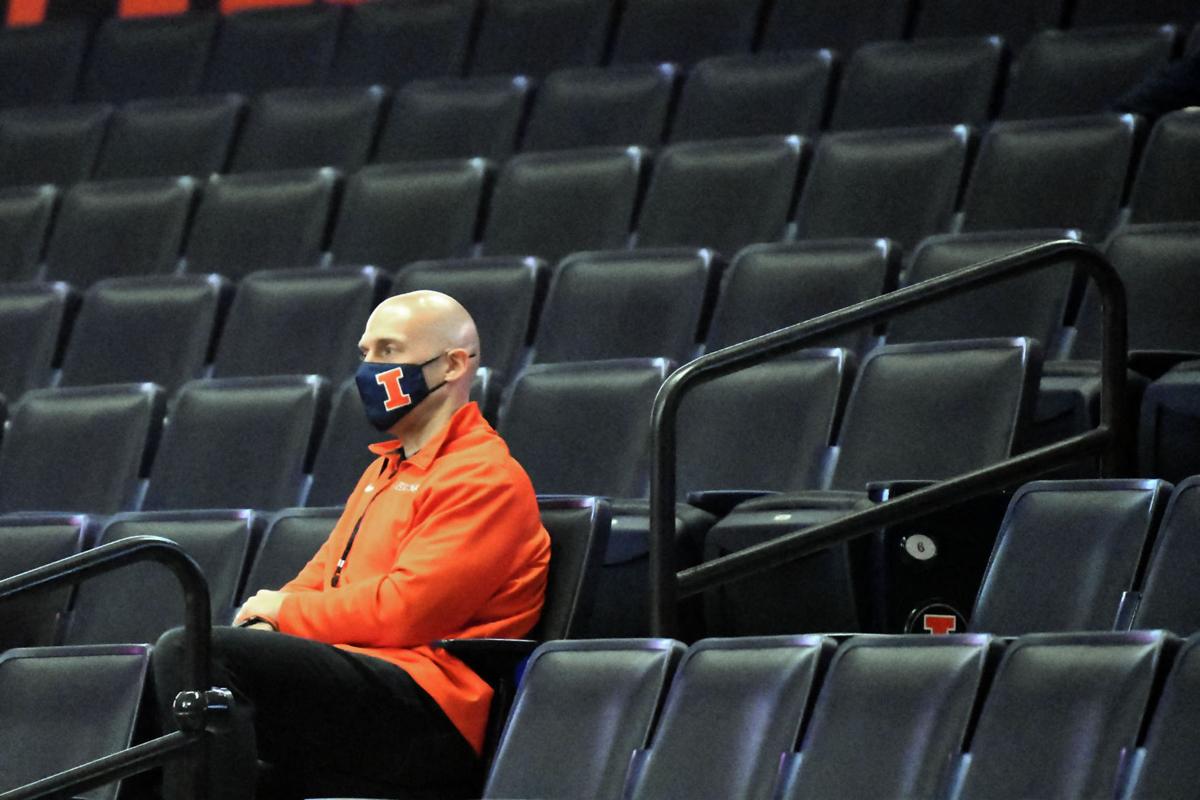 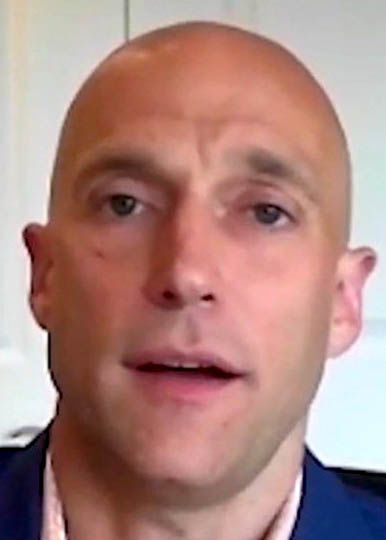