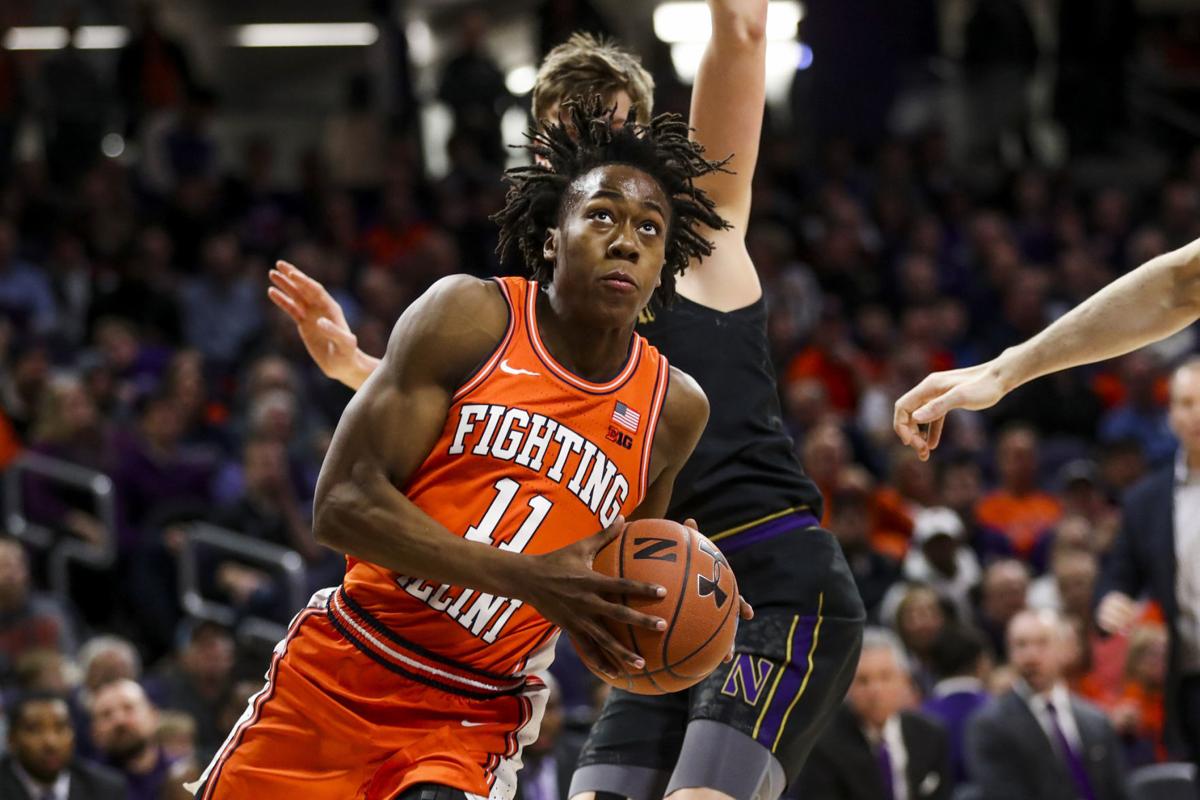 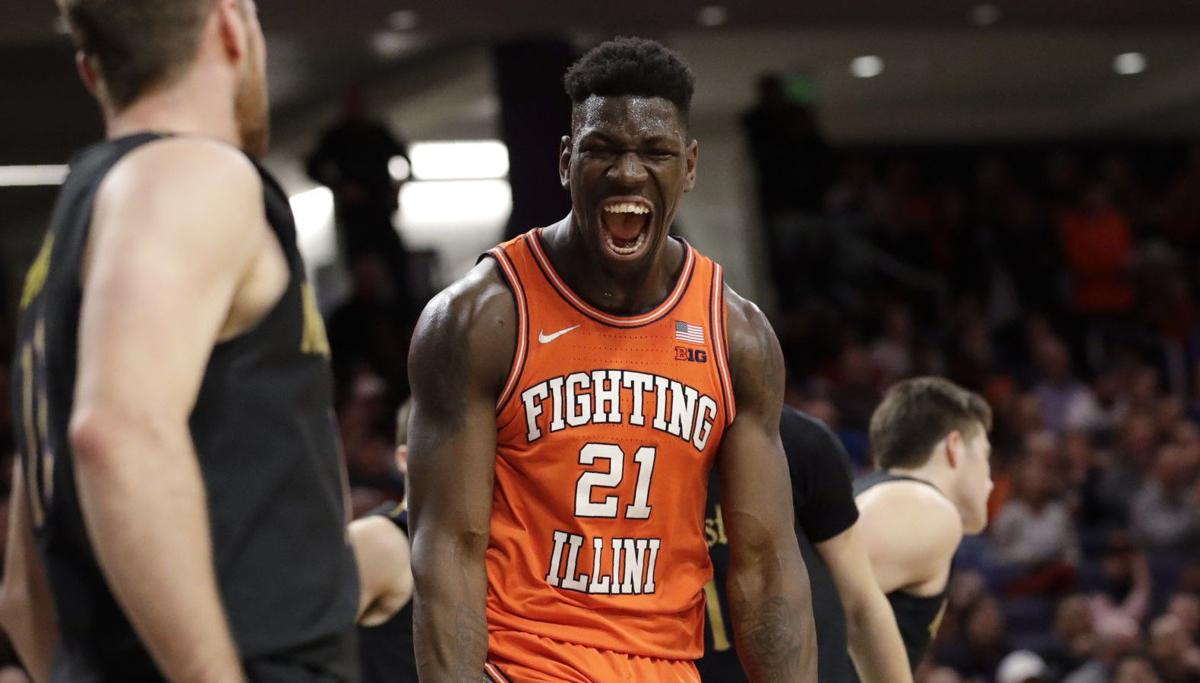 Illinois center Kofi Cockburn reacts after making a basket against Northwestern. Cockburn was Illinois' Freshman of the Year.

CHAMPAIGN — The University of Illinois Division of Athletics (DIA) announced that basketball star Ayo Dosunmu and volleyball standout Jaqueline Quade have been named the 2019-20 Dike Eddelman Award winners, which are presented annually to the top Fighting Illini male and female athlete.

The recipients were selected by the vote of Illinois head coaches, DIA executive staff and the DIA Athletic Awards committee.

As Fighting Illini Athletes of the Year, Dosunmu and Quade become Illinois' nominees for Big Ten Athlete of the Year honors, which will be announced later this spring.

Dosunmu was a first team All-Big Ten (league media and Associated Press), becoming the first Illini player in 10 years to earn a spot on the five-player first team. He led Illinois to its most Big Ten wins (13) since 2005 and the program's first top-25 ranking (No. 21) in the final season poll since 2006. He became the first Illini player in 20 years to lead the team in scoring in back-to-back seasons as a freshman and sophomore.

“What a phenomenal year Dosunmu had,” said Illinois coach Brad Underwood. “He led one of the greatest turnarounds in power five this year going from 12 wins last year to 21 win this year. He was the cog that made all of that happen. All of his game-winners, all of his clutch performances, his outstanding success in the classroom all embodies everything that we want our men’s basketball program to be about.”

Quade was a first-team All-Big Ten player, who was also on the Big Ten/Pac 12 All-Tournament team, named an AVC honorable mention All-American, an AVC All-Northeast Region player. She led the Illini to their third-straight NCAA Tournament appearance after pacing the Big Ten and ranking 32nd in the NCAA with 4.21 kills per set, totaling 497 kills on a .214 hitting percentage. Quade, a 6-2 outside hitter from Carroll High School in Fort Wayne, Ind., served up the fourth-most aces in the conference with 44 and ranked fifth with 0.37 aces per set, while registering a conference-leading 568.5 points on the season to rank 20th in the nation.

“Quade came to work every day,” said Illinois volleyball coach Chris Tamas. “She got better and better as her career went on. She always led by example. She faced a lot of pressure this year and you continued to rise about it and continually elevated her game and her team to the next level.”

Since 1983, the University of Illinois has recognized both a Male and Female Athlete of the Year. In 1993, the awards were named in honor of the 11-time UI letterman and former Olympian Dwight "Dike" Eddleman, who is generally considered the greatest athlete in the history of Illinois athletics. Eddleman participated in basketball, football and track & field in 1943 and 1946-49, earning a combined 11 varsity letters in his career.

In addition, Mia Takekawa (gymnastics) and Kofi Cockburn (men's basketball) were named the Female and Male Freshmen of the Year by the DIA. The recipients were selected by vote of Illinois head coaches, DIA executive staff and the DIA athletics awards committee.

Cockburn was named the Big Ten Freshman of the Year by both the coaches in the conference and media and was the Big Ten Newcomer of the Year (Associated Press). He was the Top rebounding freshman in Illini history (8.8 rpg) and No. 5 freshman scorer in school history (13.3 ppg).

Takekawa recorded the first perfect 10 on the beam in Illini history and won 12 double-doubles (points-rebounds), ranking fifth among all freshmen nationally and shattering the previous Illini freshman season record of six. She's just the fourth Illini gymnast to record a perfect 10 on any apparatus.

The Eddleman Athlete of the Year finalists and the Freshmen of the Year are usually recognized at the annual Oskee Awards, with the winners announced following the completion of the spring seasons. However, because to the COVID-19 pandemic that ended the 2019-20 athletic seasons early, this year's ceremony was canceled.

Kameno Bell, a former Illinois running back, is on the frontlines of New Jersey’s fight against the coronavirus. ‘It kind of wakes you up,’ the ER physician says

On Sunday, Green, who is from Griffin, Ga., announced his verbal commitment to Illinois for the Class of 2021, becoming the second verbal pledge for Smith, Illinois' head coach, in the class.

The Big Ten announced Monday it will give its student-athletes, coaches and full-time members of university athletic departments free, unlimited access to Calm, the most downloaded mental fitness app.

Illinois center Kofi Cockburn reacts after making a basket against Northwestern. Cockburn was Illinois' Freshman of the Year.