MINNEAPOLIS — From pregame warmup drills though the pickup-game vibe of the second half, the Illinois players kept filling Minnesota's mostly empty arena with chants and cheers.

There's a fun and relentless energy around the Fighting Illini, making an already talented team even tougher to beat.

Ayo Dosunmu had 19 points, 10 rebounds and 10 assists for his second triple-double of the season, Kofi Cockburn scored 22 points in 24 minutes, and No. 5 Illinois cruised past Minnesota 94-63 Saturday for its seventh consecutive victory.

“I always tell my teammates, ‘Enjoy this moment,” Dosunmu said. “Don’t let COVID or not being able to see your family affect it, because this is memories that’s going to last for a lifetime.”

Trent Frazier added 15 points and six steals to help the Illini (15-5, 12-3) stay in second place in the bruising Big Ten with two weeks to go in league play. The Illini had a 31-8 edge in fast-break points, shot 56% from the floor and forced 18 turnovers, as Frazier stifled Gophers star Marcus Carr.

Freshman Jamal Mashburn Jr. led Minnesota (13-10, 6-10) with 16 points and six rebounds, with his father, former NBA player Jamal Mashburn, watching in person for the first time in his college career. Nothing beyond that was worth remembering for the sputtering Gophers.

“Just have a sense of pride. We can’t let guys come in like today and just do what they want to do,” backup forward Eric Curry said.

Whether a thunderous one-handed dunk by the 7-foot, 285-pound Cockburn or a slick lob pass from Dosunmu to Giorgi Bezhanishvili for a slam, the Illini had a lot to smile about.

“It was special," Frazier said, “just hearing the energy from the bench.”

Dosunmu added yet more fuel for his national player of the year candidacy.

“I have no idea who in the hell anybody thinks is any better than him right now,” Underwood said.

Brad Underwood put in his time — 26 years at mostly small programs — before landing his 1st college head coaching job. Now he has Illinois poised for a long NCAA Tournament run.

The best-shooting team in the Big Ten used a 27-6 run over a six-minute stretch bridging halftime to dominate Minnesota for the second time this season — after a 92-65 victory on Dec. 15.

The Gophers couldn't have looked more deflated or flustered. When Carr wasn't ready for a pass along the perimeter by Tre' Williams in the closing seconds, Frazier intercepted it and flung a half-court shot that swished at the buzzer for a 48-33 lead.

On the first play of the second half, Cockburn rebounded a missed 3-pointer in front of fellow 7-footer Liam Robbins and dunked it with no resistance.

Robbins, playing through a sprained ankle, had four blocks and four assists but went scoreless in 13 minutes. The Gophers were also missing Gabe Kalscheur, their best defender and third-leading scorer, because of a broken finger on his shooting hand. Carr and Brandon Johnson each had 12 points and Williams scored 11 points for Minnesota, which has lost six of its last eight games.

“We certainly seem a little bit disjointed with those two guys out, but we’ve got to find a way,” Gophers coach Richard Pitino said.

This was Minnesota's third-worst defeat at home in program history, behind a 39-point loss to UCLA in 1968 and a 34-point loss to Purdue in 2018.

Illinois: With a seventh Quad 1 win, as defined by the NCAA's formula for strength of schedule, the Illini matched Gonzaga for the second-most in the country. They're coming in hot for a No. 1 seed, with five road wins in a row and their best Big Ten record since the national runners-up in 2005.

Minnesota: Despite wins over Iowa, Ohio State and Michigan — three of the top four teams in the Big Ten and all ranked in the top 11 of the latest AP poll — the Gophers are nowhere near a lock for the NCAA Tournament. Winning their last four regular season games might be necessary to get in.

Illinois: Visits Michigan State on Tuesday. With a game against Nebraska rescheduled for Thursday, the Illini will play four games in eight days ending with a trip to Wisconsin next Saturday.

Minnesota: Hosts Northwestern on Thursday, a game moved up two days to make room for a rescheduled matchup at Nebraska that will now be played next Saturday.

Watch now: No. 5 Illinois has put Minnesota in the rearview as Michigan State begins challenging stretch

CHAMPAIGN — After consecutive home losses to Maryland and Ohio State, Illinois head basketball coach Brad Underwood made his one and only star…

EAST LANSING, Mich. — Michigan State started its long string of NCAA Tournament appearances in the previous century by being the toughest team…

Watch now: As senior night arrives for No. 5 Illinois, Brad Underwood believes it is time for Ayo Dosunmu to go to the NBA draft

The Illinois men's basketball team got to experience what the future will look like without Ayo Dosunmu Thursday against Nebraska.

Illinois defeated Nebraska 86-70 on Thursday as the senior players celebrated their last game at the State Farm Center. 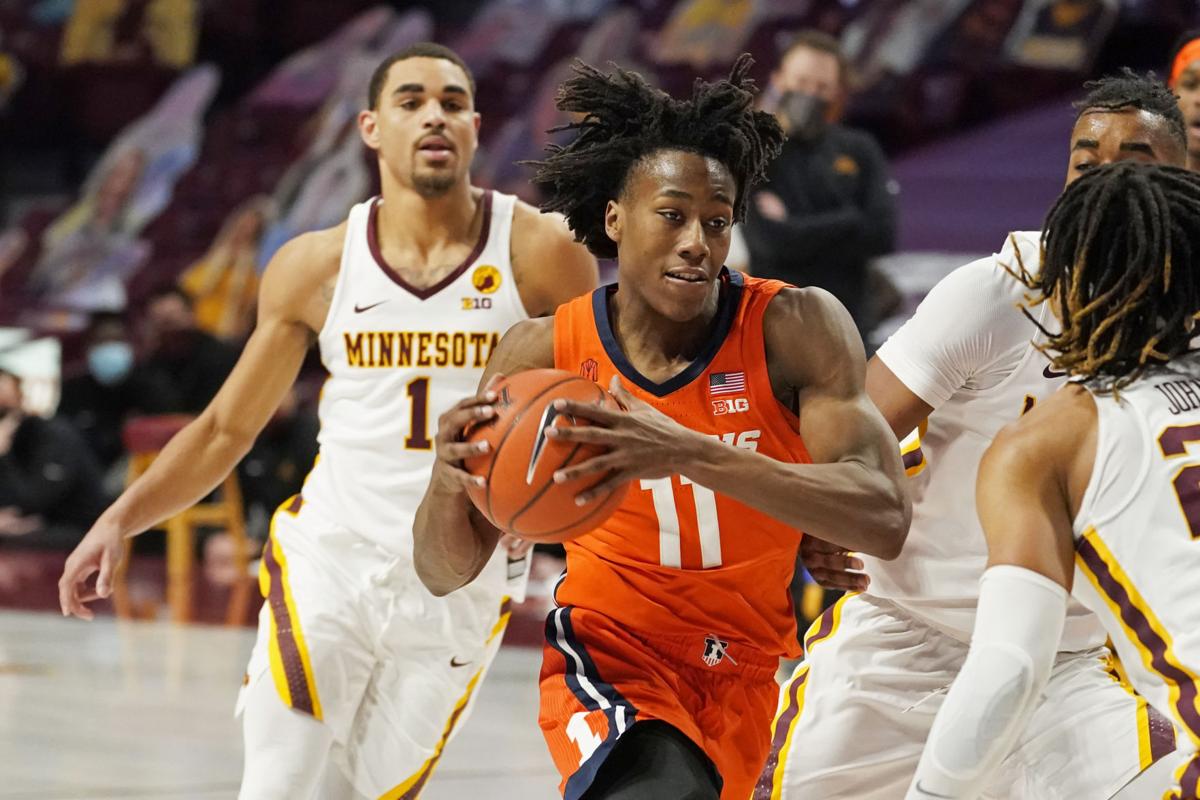 Illinois' Ayo Dosunmu (11) drives past Minnesota's Tre' Williams (1) in the second half on Saturday in Minneapolis. Dosunmu scored 19 points. 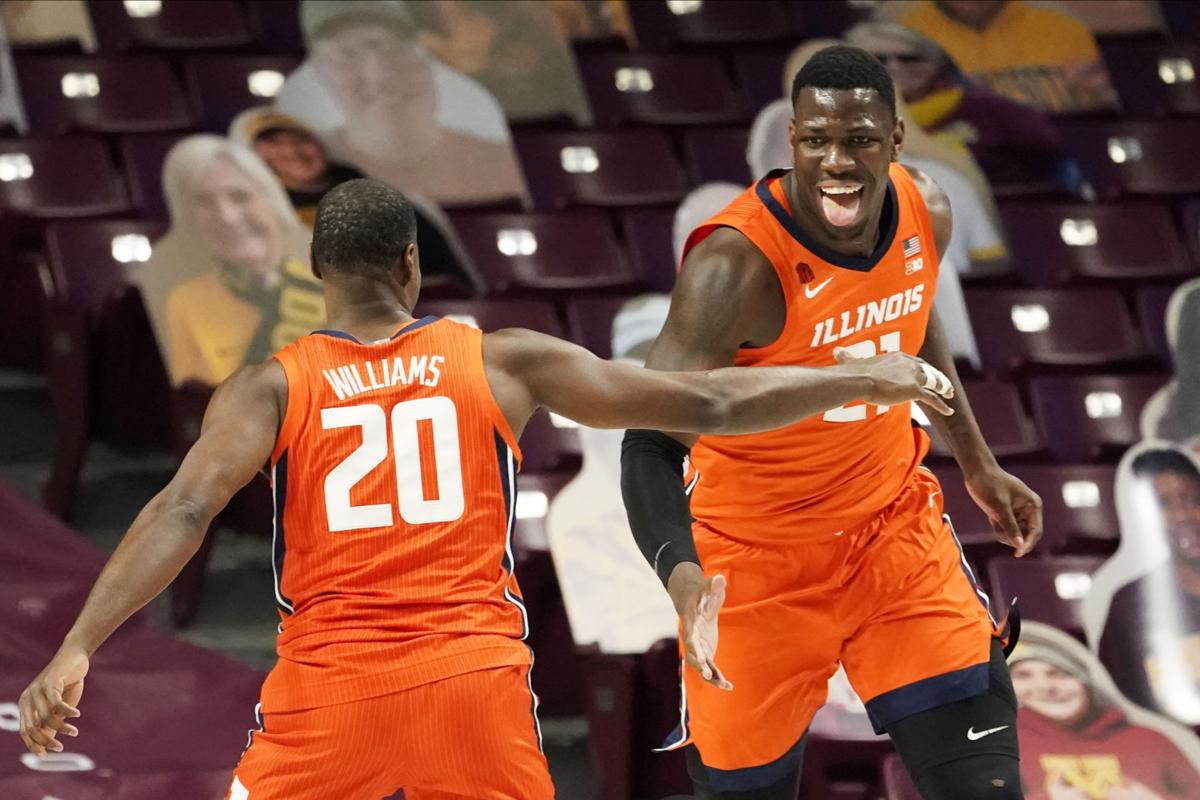 Illinois' Kofi Cockburn, right, celebrates one of his shots with Illinois' Da'Monte Williams (20) in the first half on Saturday in Minneapolis.