CHAMPAIGN — When Illinois football tight end Luke Ford found out that Bret Bielema would be the Fighting Illini's new head football coach, it brought him back to high school in Carterville as one of the nation's top tight end recruits.

Among the schools that recruited Ford was Bielema's University of Arkansas team and Ford initially committed to join the Razorbacks. Ford ultimately de-committed and went to the University of Georgia for a season before transferring to Illinois.

Bielema's arrival at Illinois could have been an awkward situation for Ford but he and his new coach have developed a great working relationship.

"It has come full circle. I committed to him out of high school and I was really excited to get there and be with him. I loved everything about him out of high school," Ford said. "I came back here (to Illinois) and he's my coach again and it is awesome to work for him. He's a great coach."

Bielema and Ford had an honest conversation about where Ford could fit in to the new Illini offense and how he could get there.

"It was a funny conversation and he told me this is where you are and this is where you can be. You've got to lock in and focus on what is important," Ford said. "It is something about when (Coach Bielema) walks into a room, you can feel his presence. He's got a loud voice and when he talks, people listen. He's got a persona that you are here for business. You are going to work hard and we are going to get the best out of you."

Fans haven't seen the best of out of Ford on the field yet in college and he is the first to admit it, with a sense of humor that also reveals the honest truth.

"It is awesome to be a a part of this new offense and we will see what we do (in the fall). My first year at Georgia, I caught one ball and my second year playing I caught two," Ford said. "So if I continue on that record, I could potentially have four catches this year. We will see what happens. I'm excited for it and I like this offense so far. I am ready."

Humor has helped Ford overcome the challenges in his career, including having to sit out his sophomore season after his hardship transfer waiver was denied by the NCAA.

"There are certain things in life that you can't control and life is not fair. If you learn to just have a good outlook on it and not feel like poor me for certain things that have happened," Ford said. "I'm able to laugh about it because it is me and I can get over it. I try to keep a loose and stress free attitude about about it while maintaining that I need to work hard. I need to lock in because this is not where I want to be and I need to get better to reach my goal."

The way Bielema and his staff have changed the culture around the football program has changed the way Ford has worked and he has never felt so motivated.

"The way the coaches talk, they have a clear goal and path for everybody. They think I have the potential to be pretty good. I think I did too, but I haven't done anything," Ford said. "Either way, they have set out a goal and plan for me to work towards so it is a lot easier to create goals for myself. I have been able to lock in and focus on that and be ready for the season.

"I've never been in the facility more. I've put in more overtime here than I ever have before and working harder than I have before. It is because this staff is so great and it makes me want to show up to the building and makes me want to work hard.

Ford has taken a Bielema mantra to heart and it inspires him everyday.

"It is awesome to have the support from the coaches. Coach B says 'Be the best you every day' and that's one of his rules. I wrote that up on my little whiteboard at home," Ford said. "(I ask myself) what am I doing to get better everyday? It is the whole energy from the staff that has pushed me to work harder than I have before."

In the Orange and Blue Spring Game, Ford had five catches for 88 yards and a touchdown and his tight end counterpart Daniel Barker had three catches for 29 yards. While both players love their increased production numbers, they know the tight end role includes much more.

"D.J. is awesome and he is a great player and a great guy. We talk that whatever happens, we can't go out there and expect all these balls and all these catches," Ford said. "We are expecting to do our job and know our role in the offense and what happens — if it ends in production or it doesn't — it doesn't matter. We are here for the team."

The spring game gave Ford a chance to show the work he has been putting in in front of fans, including his parents, for the first time this year.

"The Spring Game was fun and I felt like I was doing a lot of things that I've been practicing for the past couple of years. It was good to get out there and show what I have," he said. "We have a lot of stuff to work on as a team and we are nowhere where we want to but it was fun to play in the spring game and have fans there for once too. That was nice.

"I love Illini nation and we have some awesome fans. They are loud and we could hear them. I could hear my dad out there yelling. I'm excited to be out there and have the Illini fans out there. I can't wait to have a packed house against Nebraska on Aug. 28."

Wherever LSA's Coby Crafton turns this spring, he's getting knocked into or tackled. 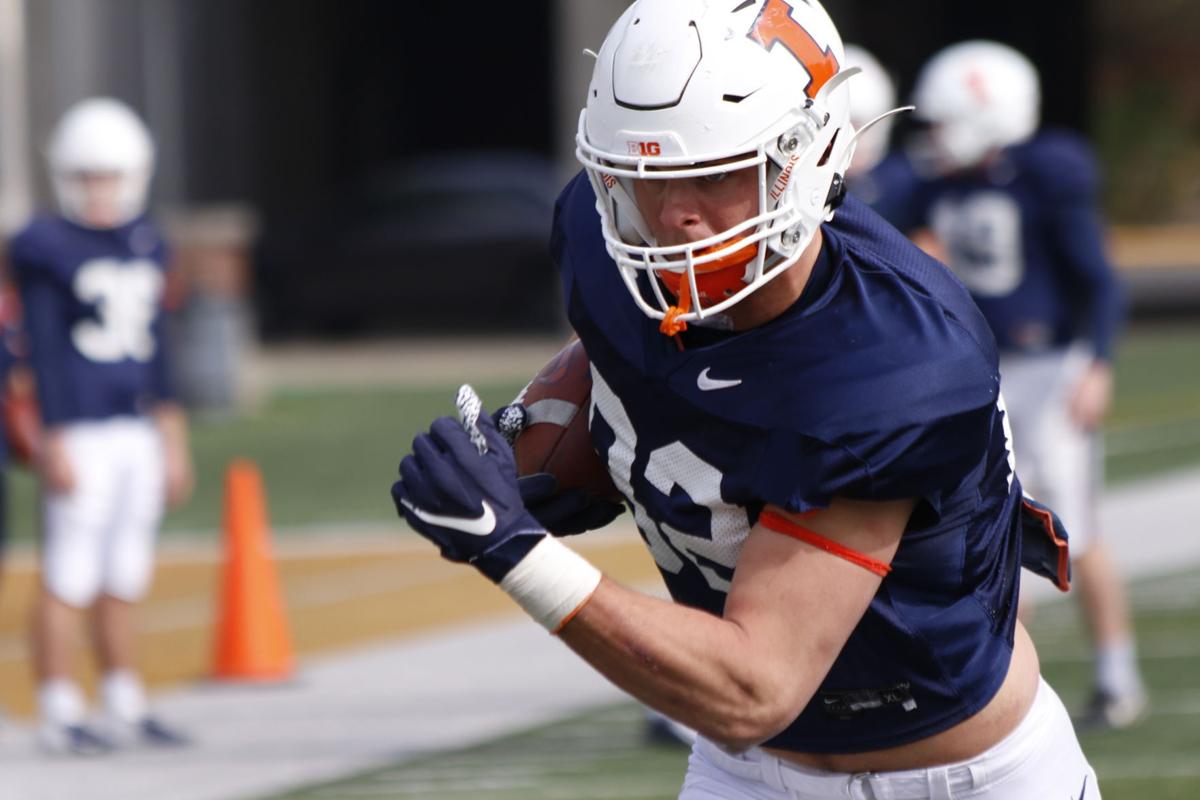 Illinois' Luke Ford (82) runs with the ball during spring practice. Ford is hoping to have a bigger role in the Illini's offense this fall. 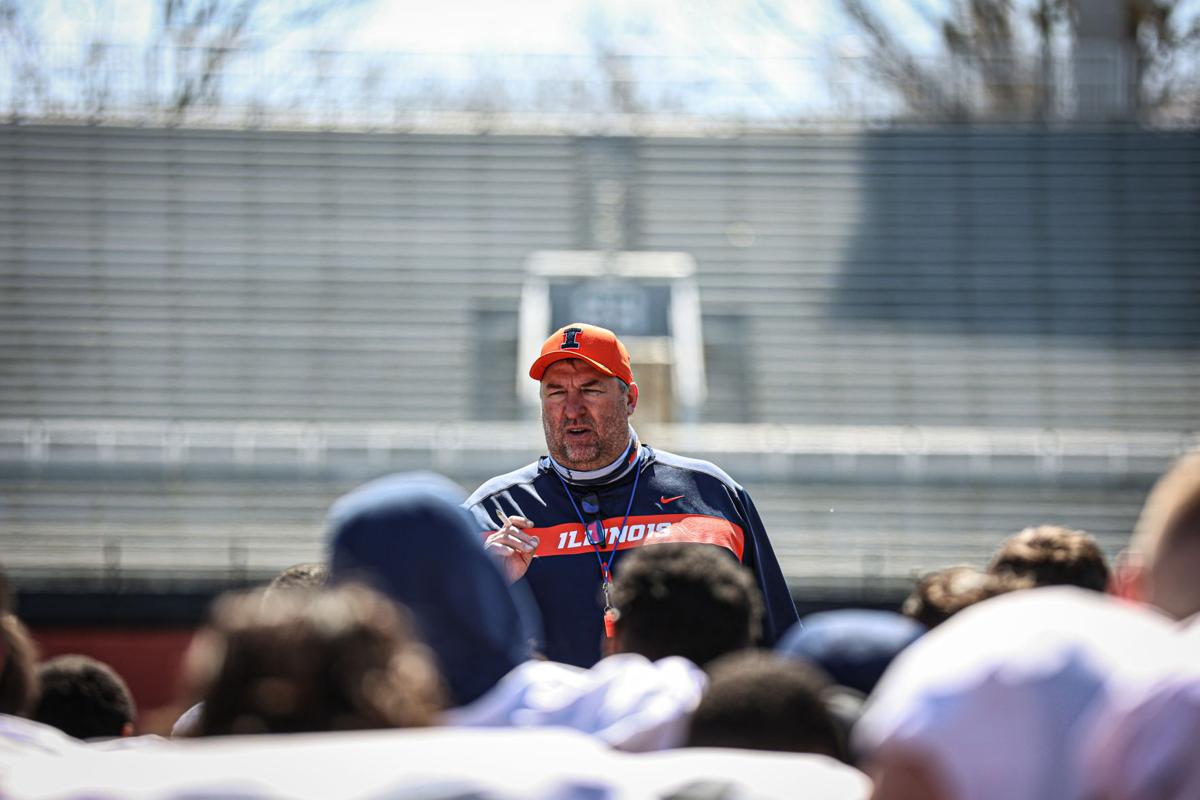 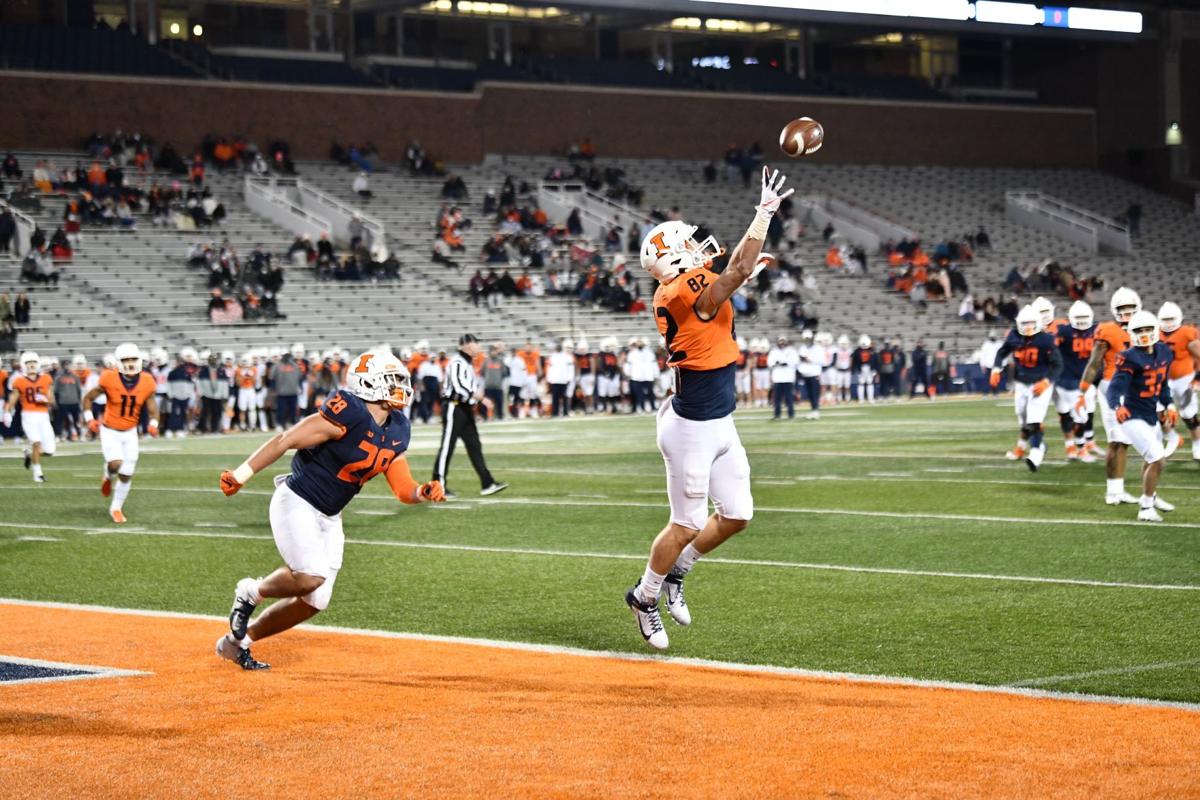 Illinois' Luke Ford (82) reaches for a pass during the Orange and Blue Spring Game on Monday. Ford finished with 88 yards receiving and a touchdown. 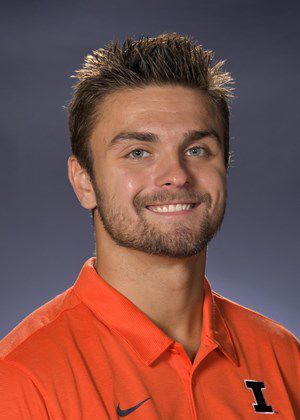