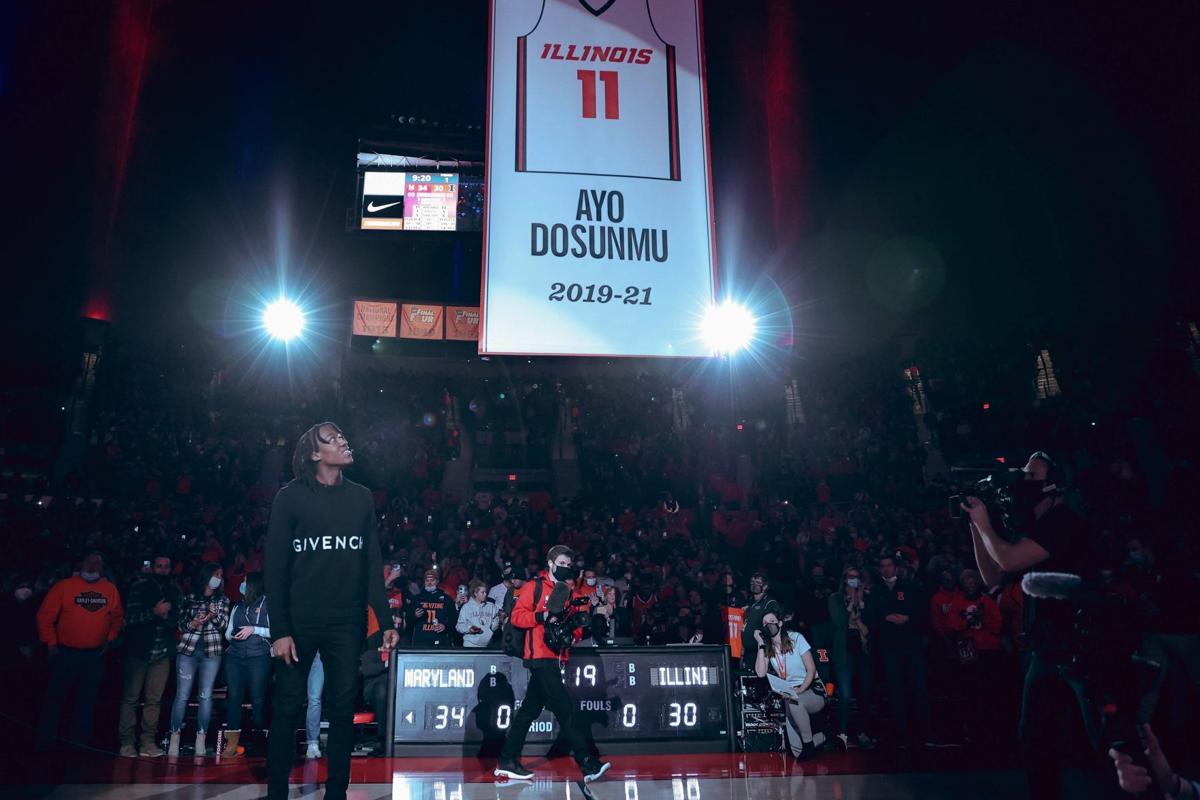 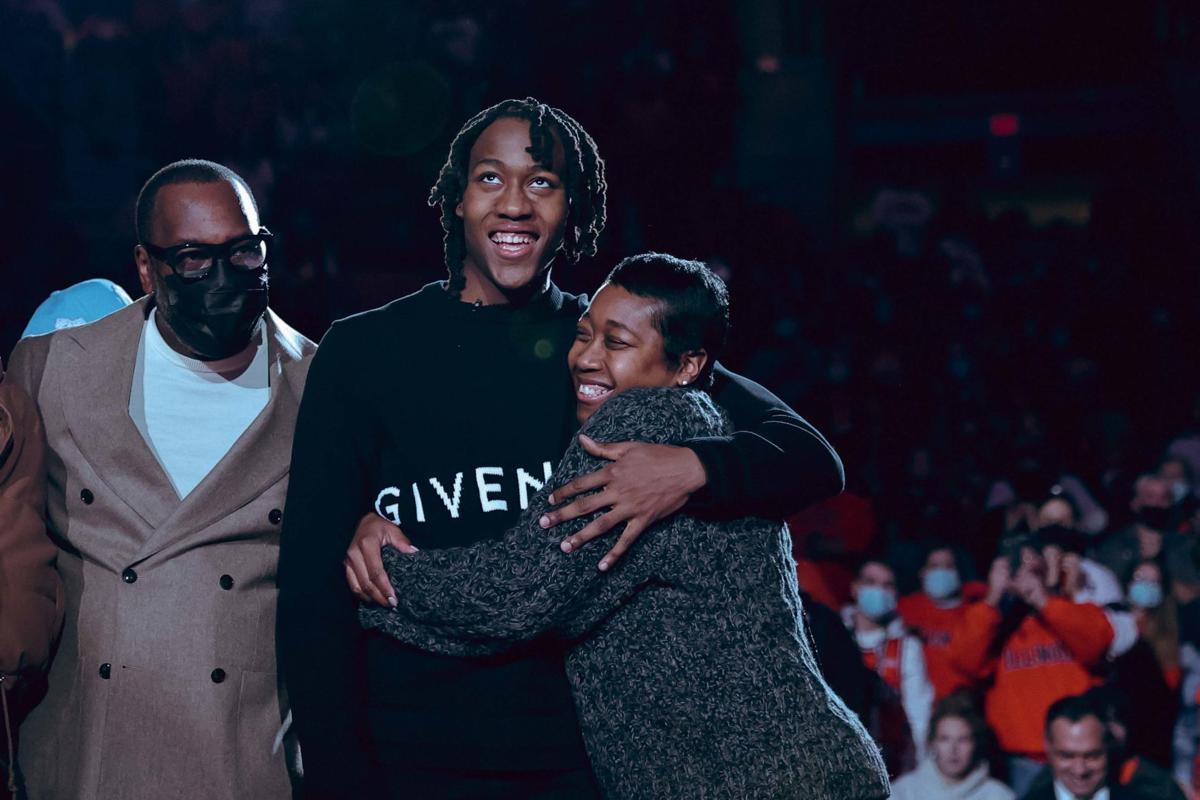 CHAMPAIGN — Even though his Illinois career has ended, it was still Ayo Dosunmu’s night at the State Farm Center.

The Chicago Bulls rookie guard and former All-American Illini guard became the 34th player to have his number hung up in the rafters during a halftime ceremony of the team’s win over Maryland on Thursday.

Dosunmu was given his introduction as a guard from Chicago before his ceremony, and the Morgan Park graduate got a warm welcome as the returning hometown hero.

“To be able to do it the way I did it, I don’t think I could’ve (drawn) that up during my recruitment,” Dosunmu said. “To look back ... at the commitment I gave this university and now look at the success I had, it’s crazy. It wasn’t easy. It was very hard.”

Dosunmu was the first player since Dee Brown, another dynamic guard who wore No. 11, to get his jersey retired.

“All the people up there, I’m blessed to be up there with them,” Dosunmu said. “I know it’s not easy to get your jersey retired. I’m just honored.”

There were 5,000 black masks lined on seats to pay homage to his stretch as the “masked mamba” last season after suffering a broken nose.

All-Star teammate DeMar DeRozan was in attendance next to him, showing how much the team values its first-year guard who has quickly gone from a second-round pick to a key rotation piece, playing 18.6 minutes per game.

“It’s special,” Dosunmu said. “It just shows the type of person he is to come out here and be there for me in this special time. For him to be here, it shows what kind of person and leader he is.”

Dosunmu, who brought his family with him back to Champaign, has been following Illinois this season from afar. He still exchanges texts with Brad Underwood about the team’s season.

Dosunmu’s imprint is still seen on this year’s team, with coaches and players making a video expressing congratulations to him and telling him how much he meant to the program.

During his three-year career, he and the Illini improved each season before his junior year ended with a Big Ten title after the team went 12-21 his freshman year.

“He’s a guy that chose to come to us when we weren’t winning,” Underwood said. “We stunk. We were a bad basketball team. He’s the definition of everything we want our program to be about. It’s no surprise he’s having a great NBA career, and he’ll have a long one.”

Dosunmu still has contact with current Illini players and, along with DeRozan, jumped up after a Cockburn slam in the second half. Cockburn said the team couldn’t lose on the night Ayo’s jersey was hung. He said he's still close friends with Dosunmu.

The State Farm Center crowd welcomed him with open arms, and Underwood said he and his family would always be welcome back.

“Just knowing the legacy and mark I left here, not just on the court but building the relationship with guys and the coaching staff, players, that’s what it’s all about,” Dosunmu said. “Building bonds and relationships that can never be taken away and then last forever. I thought I did that here with Illinois.”

Kofi Cockburn did not travel with the team to Maryland and will miss the game while in concussion protocols.

Watch now: No. 24 Illinois upsets No. 10 Michigan State while shorthanded

Trent Frazier had 16 points and Illinois played one of its best defensive games of the season to get a win over a top-10 team.

Watch now: 3 takeaways from No. 24 Illinois' win over No. 10 Michigan State

Trent Frazier became the No. 9 scorer in Illinois history and the Illini played one of their best defensive games of the season to get a win over a top-10 team.

Watch now: Beating No. 10 Michigan State would be statement win for No. 24 Illinois

Illinois is coming off back-to-back losses for the first time since November and is still in search of its first win over a ranked team.

A late surge by Maryland handed Illinois its second loss of the week.

Illinois' Alfonso Plummer has gone from a bench player at the junior college level to the Big Ten’s best shooter and leader in 3s, and arguably one of the top long-range snipers in the country, over a five-year period.

Watch now: Illinois finally has full roster ahead of rematch with Maryland

Illinois will have a healthy Andre Curbelo when it plays Maryland on the road Friday.

Meyers Leonard 'taking steps to educate myself' after anti-Semitic slur

Meyers Leonard was suspended from the NBA 10 months ago after uttering an anti-Semitic slur on a twitch stream. Since then he's focused on learning and correcting his mistake.

Jamal Woods and Luke Ford are coming back to the Illini for the 2022 season.

Tupper: Can Andre Curbelo fit in with 'reimagined' Illinois when teams returns?

There was a script that loosely mapped out the way this Illini basketball season was supposed to go and almost immediately Brad Underwood was forced to crumple it up. 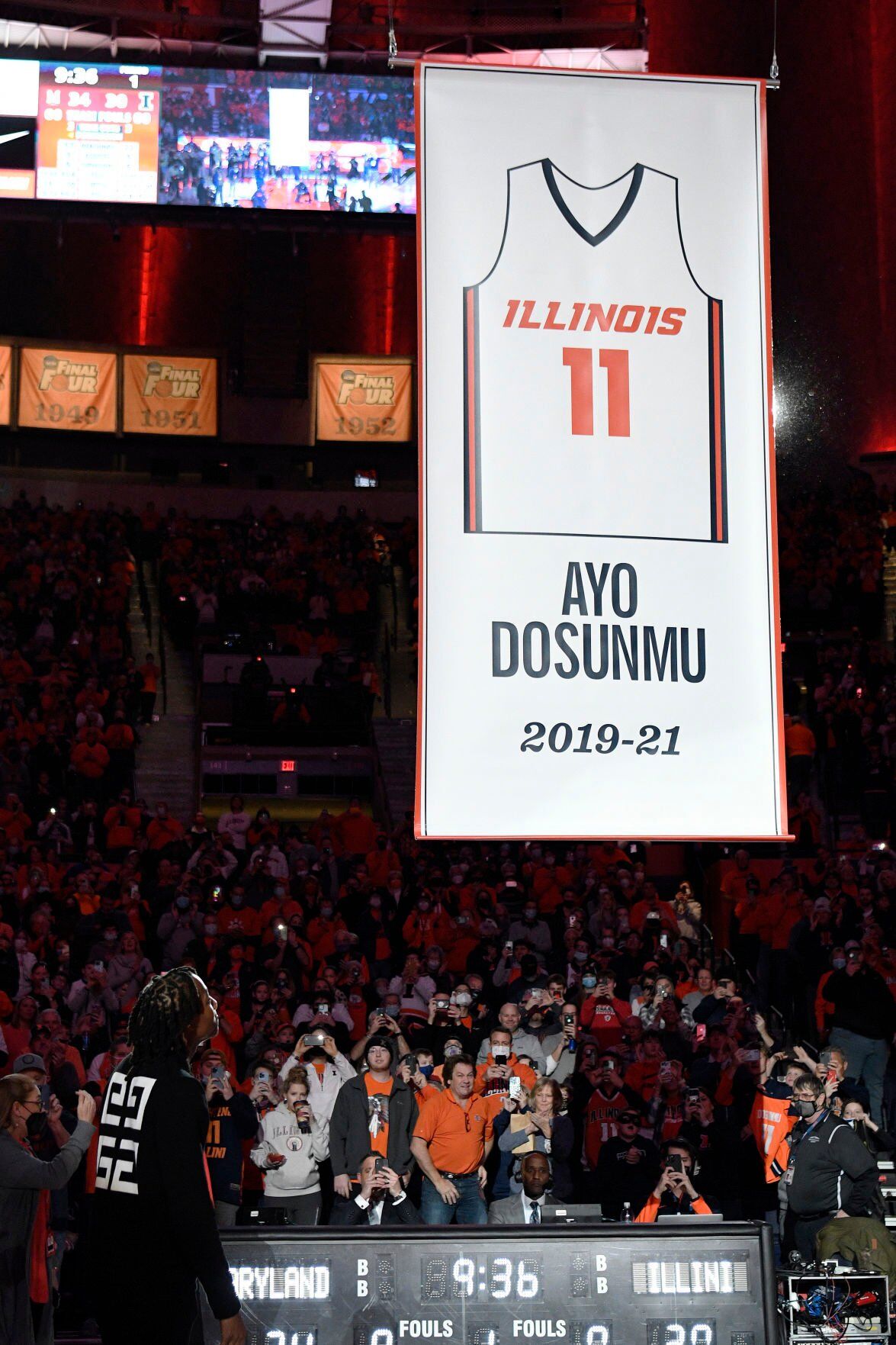 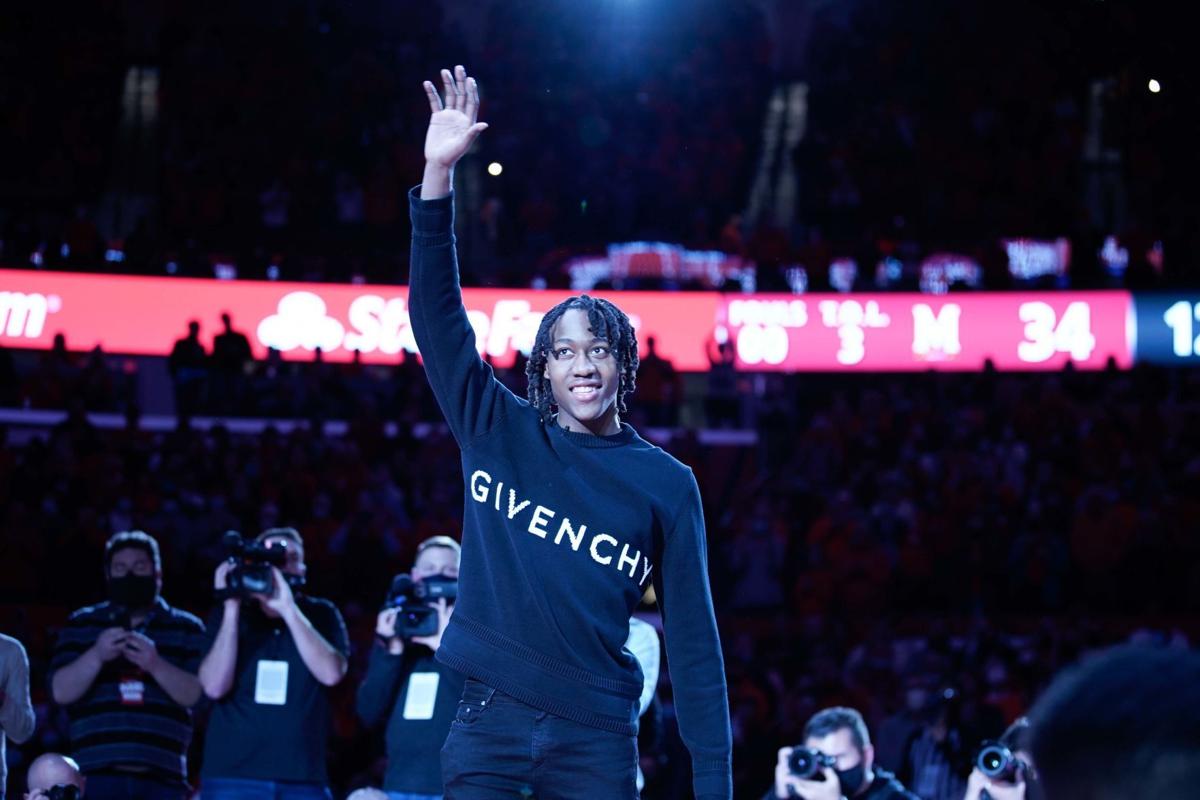 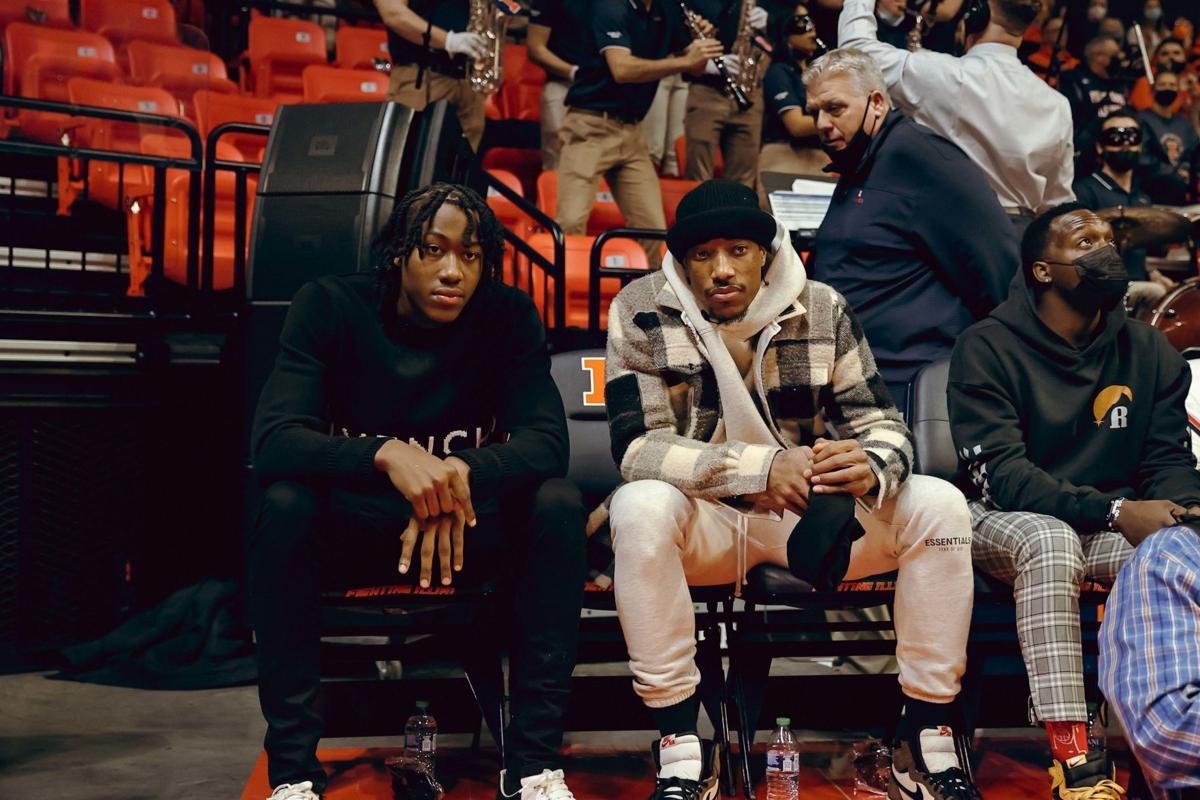