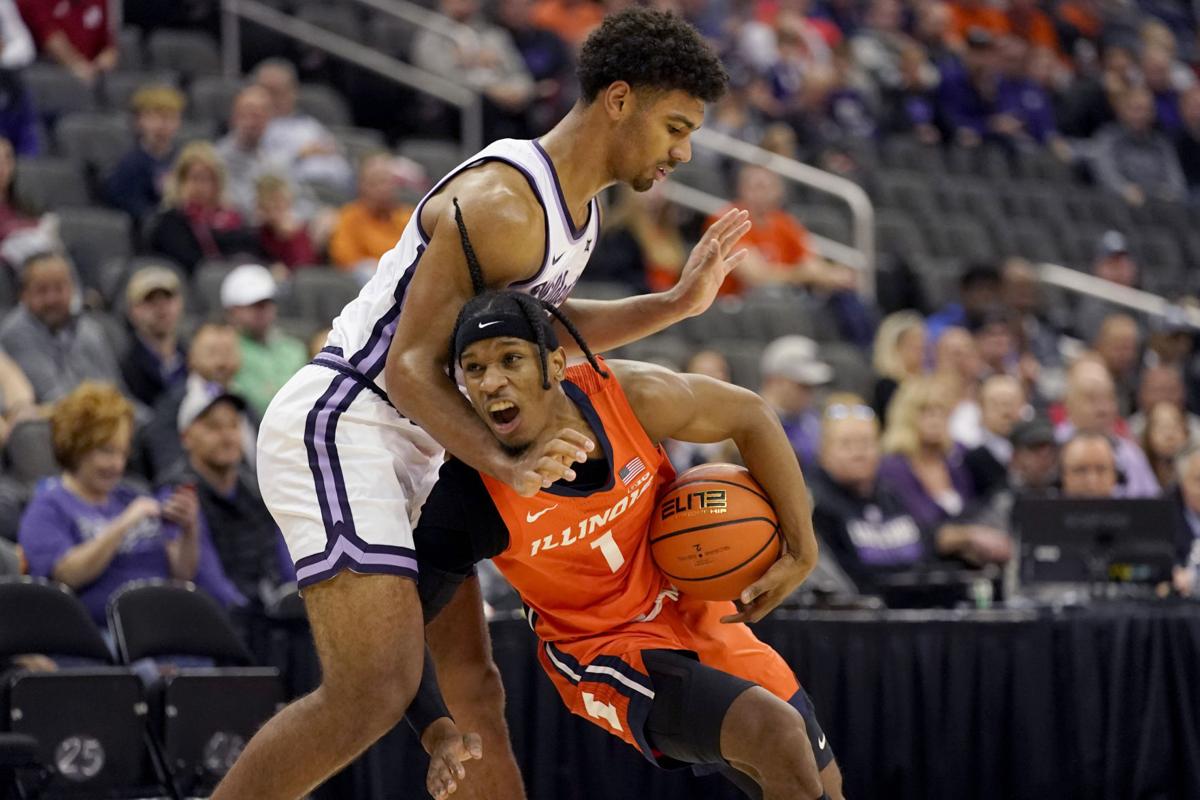 Illinois' Trent Frazier (1) drives under pressure from Kansas State's Mark Smith during the first half Tuesday in Kansas City, Mo. 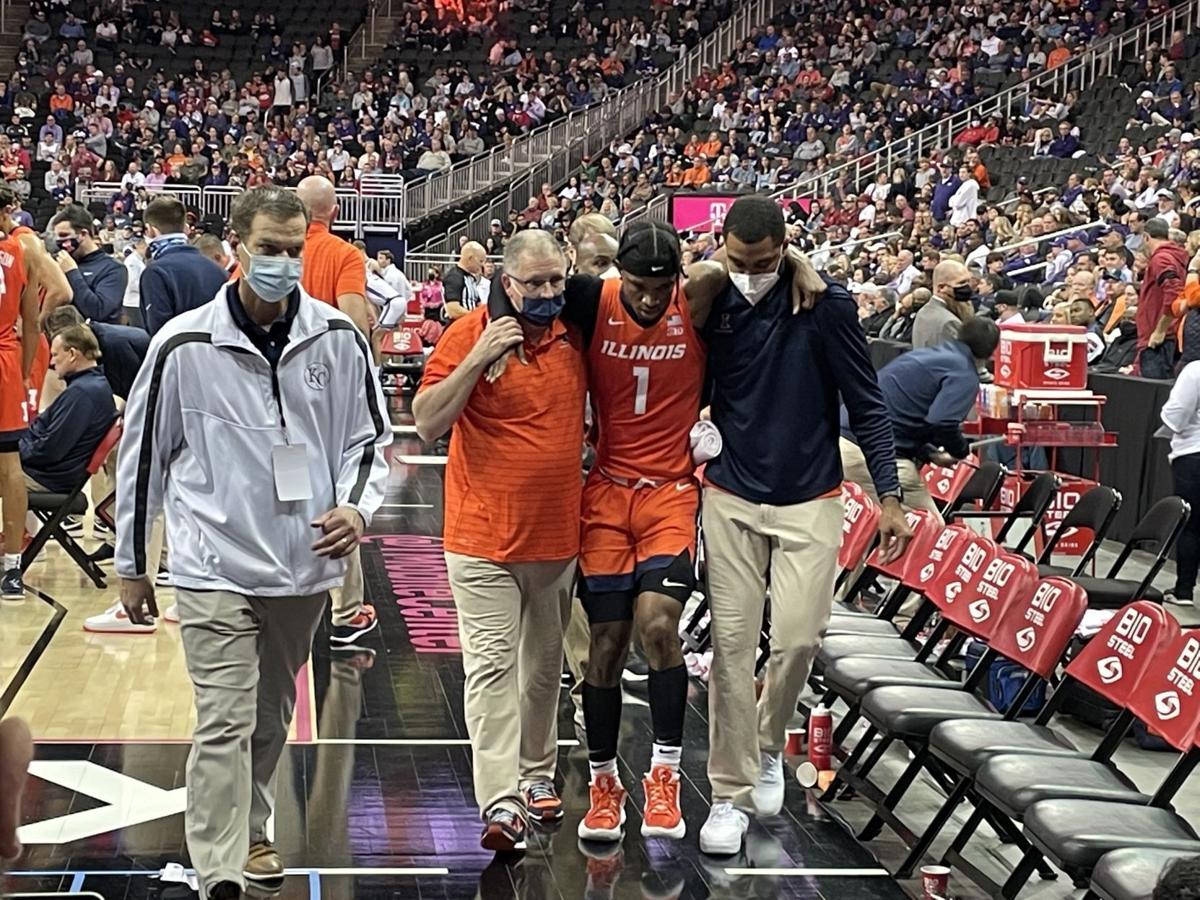 Illinois guard Trent Frazier is helped off the court after suffering a second-half injury Tuesday against Kansas State at the T-Mobile Center in Kansas City, Mo. 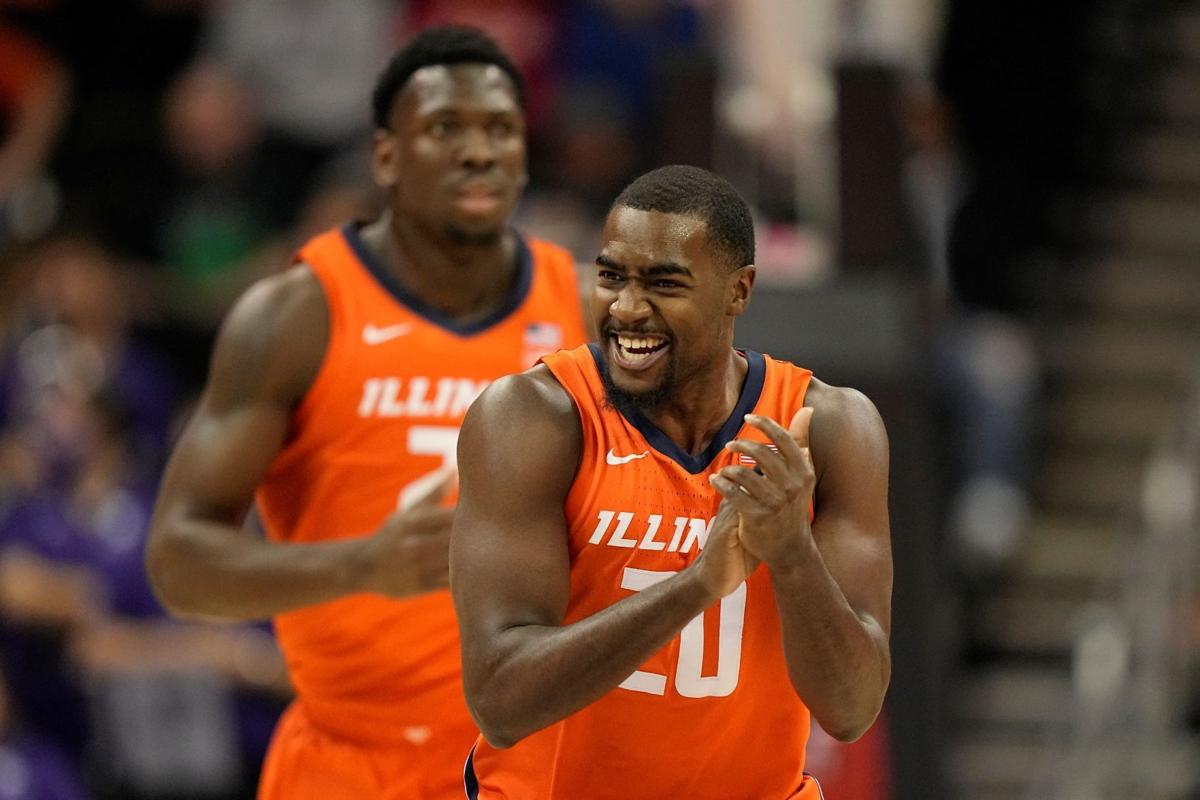 Illinois' Da'Monte Williams celebrates after making a basket during the first half against Kansas State on Tuesday in Kansas City, Mo.

CHAMPAIGN — The much desired feeling of control was seeping back into University of Illinois basketball coach Brad Underwood during Tuesday’s 72-64 victory over Kansas State during the Hall of Fame Classic in Kansas City, Mo.

“That was the first night where I could coach and put guys in position to score baskets, run actions to get Kofi (Cockburn) the ball,” Underwood said. “It was nice to finally feel like I was impacting the game from coaching and not just trying to get through it.”

And then senior guard Trent Frazier suffered a knee injury.

Frazier was helped off the court at the 7:09 mark of the second half and appears doubtful for Friday’s 7 p.m. nonconference game against Texas-Rio Grande Valley at the State Farm Center.

Underwood said Wednesday he had “nothing of significance” as far as information on the extent of Frazier’s injury. The Illinois coach did say Frazier was on crutches but “we know it’s not an ACL (anterior cruciate ligament tear). We’ll continue to monitor that.”

Frazier’s status once again muddies an Illinois early season that has witnessed Cockburn sit out three games with an NCAA suspension as well as having guards Frazier, Andre Curbelo, Austin Hutcherson and Luke Goode miss action because of injuries.

“You don’t replace Trent. He plays the point and off of it,” Underwood said. “Trent is the one guy who doesn’t make scouting report mistakes. There’s a mental component to not having him if he’s out.”

Hutcherson, Alfonso Plummer and freshman Brandin Podziemski all could be in line for more playing time if Frazier is sidelined.

Underwood expressed optimism concerning point guard Curbelo, who was previously in the concussion protocol and was limited to 19 minutes against Kansas State.

Illinois has “ruled that out,” Underwood said when asked about lingering head trauma.

“He was terrific today (Wednesday). He felt good. He was extremely involved,” said Underwood, whose 14th-ranked team has a 3-2 record. “It’s frustrating for him to not feel right. He’s in a really good place. We hope we’re gaining ground on it.”

The Illini coach believes the absences have adversely affected his team’s conditioning.

“I don’t think we’re in great, great shape yet. We’ve got to get back into late game shape,” he said. “They are trying really hard to be a really good team. Nothing has come easy to this point. We’re guarding and playing well enough at that end. An area we have to clean up are the turnovers.”

Rio Grande Valley is 4-2 and coached by Matt Figger. The Western Athletic Conference program is based in Edinburg, Texas.

Rio Grande Valley is shooting 44.8 percent from the field, 34.3 percent beyond the 3-point arc and 69.6 percent at the free throw line.

Cockburn has amassed 41 points and 20 rebounds in two games since returning from his suspension.

Illinois heads to Iowa to face the Hawkeyes.

The Illini triumphed in the Big Ten/ACC Challenge.

Tupper: Step right up, because this Illinois basketball ride is just beginning

There will be more disappointments along the way with Illini basketball, but if we hang on tight, we’ll end up watching a tougher out in the NCAA Tournament.

Watch now: Bielema plans to be on Illini sidelines for season finale against Northwestern

Illinois head football coach Bret Bielema said he should be with the team in person no later than Friday and on the sidelines Saturday in season finale against Northwestern.

Ty Rodgers has signed with University of Illinois basketball

Tupper: Kofi Cockburn suspension may turn out to be net positive for Illinois

Anticipation for this Illinois basketball season is through the roof. It’s going to be a breeze, right? Probably not.

Illinois moved to 2-0 with an easy win.

Illinois' Trent Frazier (1) drives under pressure from Kansas State's Mark Smith during the first half Tuesday in Kansas City, Mo.

Illinois guard Trent Frazier is helped off the court after suffering a second-half injury Tuesday against Kansas State at the T-Mobile Center in Kansas City, Mo.

Illinois' Da'Monte Williams celebrates after making a basket during the first half against Kansas State on Tuesday in Kansas City, Mo.