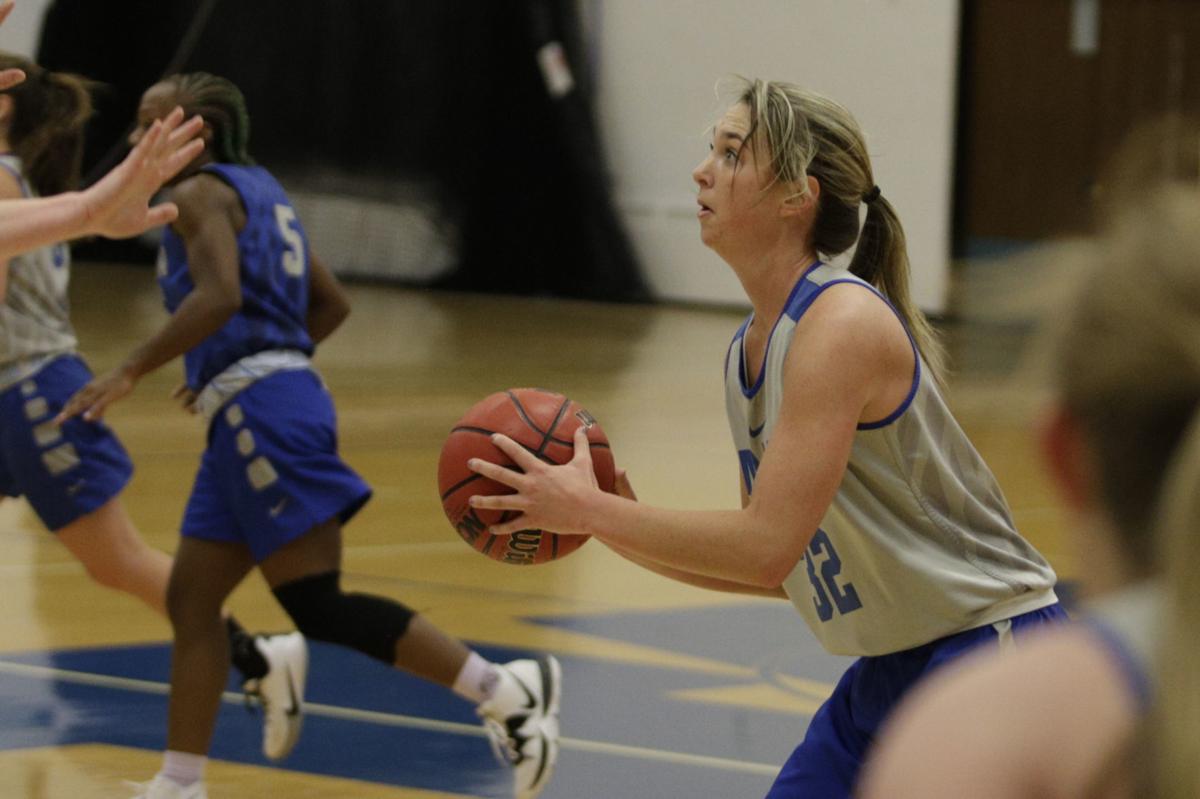 Bailey Coffman (32) takes a shot during practice on Tuesday at the Griswold Center at Millikin University. Coffman, a freshman, is the team's second leading scorer. 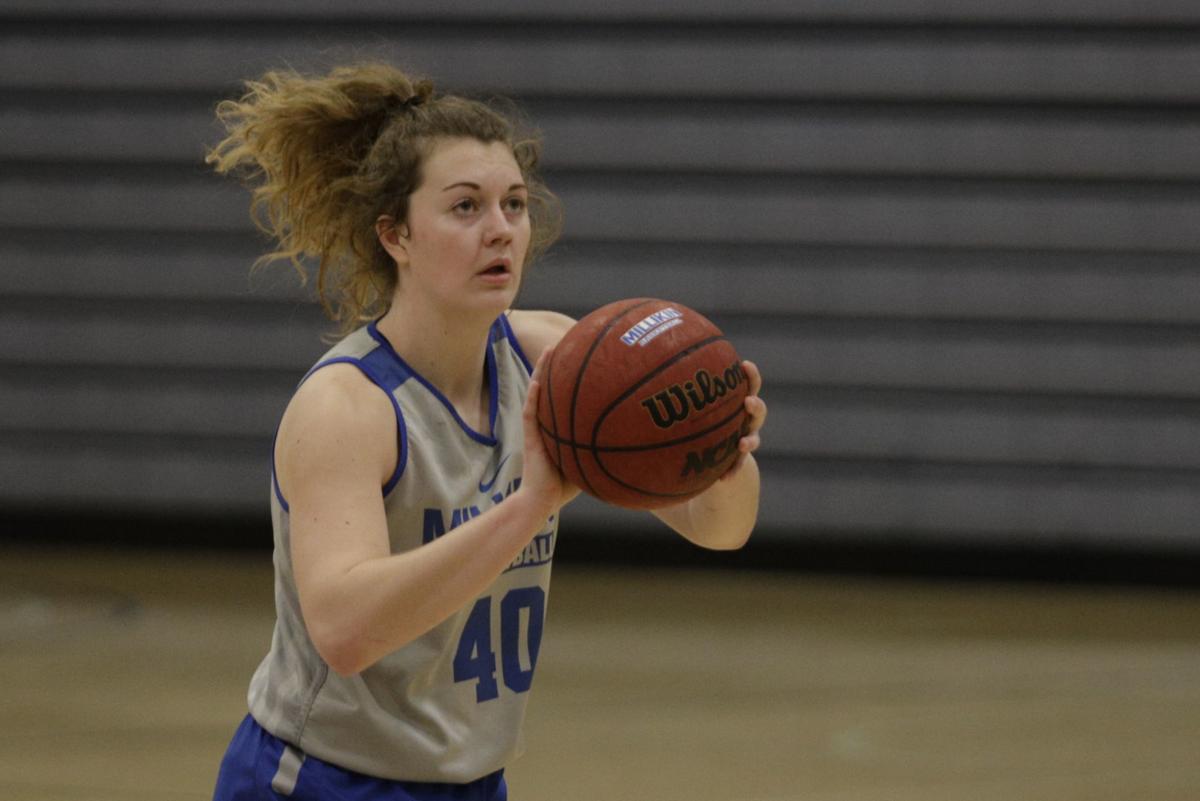 Abby Ratsch (40) shoots the ball at practice on Tuesday at the Griswold Center at Millikin University. Ratsch, a freshman, is the team's leading rebounder. 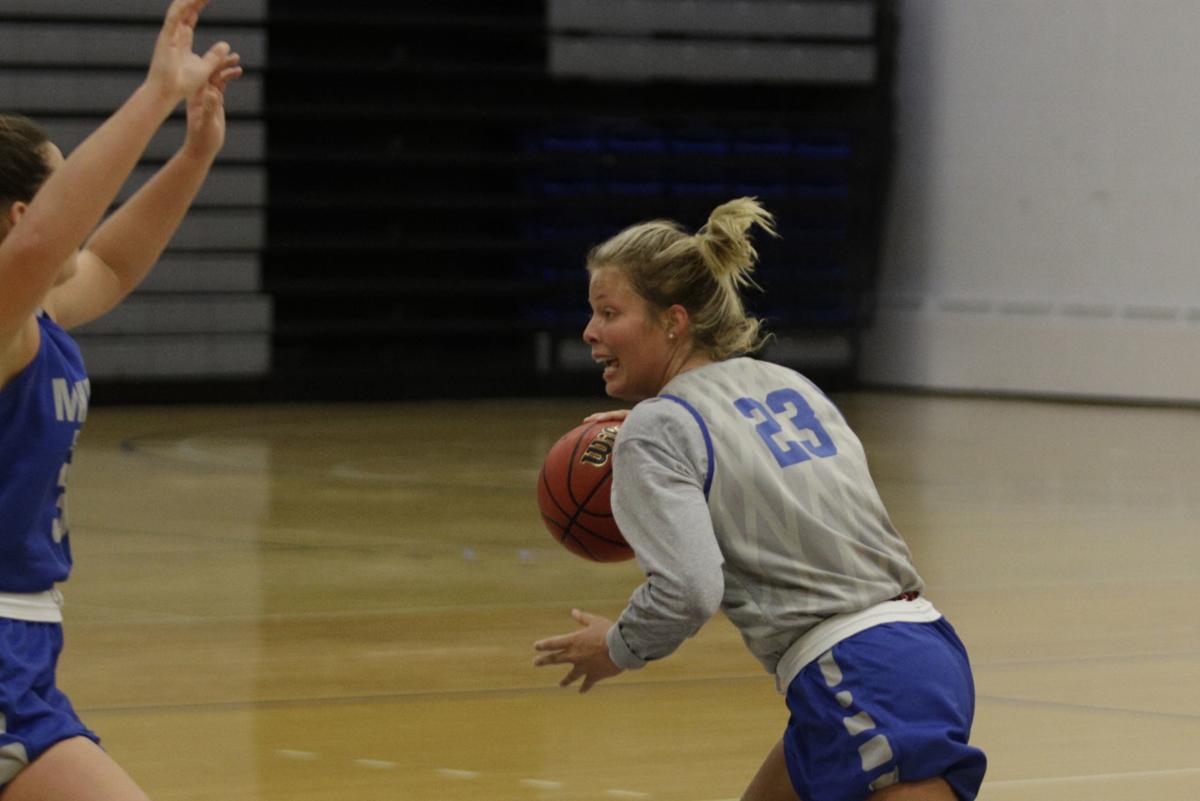 Jordan Hildebrand (23) heads to the basket at practice on Tuesday at the Griswold Center at Millikin University. Hildebrand is the team's leading scorer this season.

DECATUR — The Millikin women’s basketball team was off to their best start since the 2000-01 season, but head coach Olivia Lett wasn’t satisfied.

The wins were piling up — the 6-0 start was the Big Blue’s best since a 10-0 start 19 years ago — but Lett could see her players were covering up some team deficiencies with their individual talent. Illinois College exposed that on Sunday, handing Millikin (6-1) its first loss of the season 78-73.

“We are more skilled this year so we were getting away with not playing with that same level of intensity,” Lett said. “We suffered that loss against Illinois College and I think we really figured out that maybe we weren’t going quite as hard as we thought we were.”

A strong practice on Monday had the team finding that intensity that Lett hopes will carry over to the start of their CCIW schedule against Wheaton on Saturday.

“I actually don’t think we have played to our full potential yet and I think that is something that is exciting. It has also been a little bit frustrating, too,” Lett said. “We are so young and so we are learning how to do that and what it takes to compete at this level.”

The Big Blue have already nearly matched their win total from last season (8-17, 4-12 CCIW), and part of the success has been the play of a trio of freshmen — Bailey Coffman, Abby Ratsch and Miranda Fox — who make up Lett’s first full recruiting class.

All three attended Central Illinois high schools — Coffman at Bloomington Central Catholic, Ratsch at Springfield and Fox at Effingham — and each represent Lett’s style of recruits.

“I think that you can see our stamp on it a little more with players a little longer with more size," Lett said. "That was our goal to get some length and athleticism and get back to controlling the (Central Illinois) area. If you look at our freshmen class, we are very local — that’s our goal."

“Bailey was a big get for us, being from Bloomington and being able to go there and steal someone away was big and it gives us some name credibility in the area,” Lett said. “Same thing with Abby coming from Springfield High. It gives us two top kids out of the area and that’s a big deal. Miranda is someone who hasn’t stood out stats-wise yet, but she does a lot for us in picking up places we might be weaker.”

For Coffman and Ratsch, Lott’s description of the Millikin program she was installing made all the difference while recruiting.

“A lot of it was Coach Lett and her vision for the team. She had a lot of goals for her team last year and I saw how hard they worked and that was something I wanted to be a part of,” Coffman said.

Ratsch was sold on the similarities to her high school program at Springfield.

"Honestly, it was the program that (Lett) wanted to create,” she said. “She was emphasizing toughness and the championship mentality with a bunch of energy and I was really drawn towards that because it was similar to what I had in high school and I really liked that.”

Wheaton was the regular-season CCIW champion last season and will give the Big Blue a test to see if their non-conference success can carry over to the more challenging portion of the schedule.

“Winning those first games was important in how we are planning to be as a team this year,” Coffman said. “In conference play, some of these teams will be bigger and faster than what we have played and we are trying to prepare for that this week.”

Lett believes her freshmen might not appreciate the start they are on in their first handful of games in their college career.

“I don’t know if they realize it how impressive their numbers are as freshmen,” Lett said. “That’s great to have because they have high expectations. They expect to be good and go in and win games and that is something that has changed for us mentality wise.”

The Millikin women's basketball improved to 6-0 with a 78-56 win over Webster University on Tuesday.

Millikin University has announced the first phase of M-Powered, a multimillion dollar campaign to fund an athletic facility expansion and renovation plan. Initial efforts will focus on the construction of a building to house a fitness center and weight room, six locker rooms, classrooms and team meeting space.

All season, the Millikin women's basketball team has had young players step forward and grab their moments.

DECATUR -- The Millikin women’s basketball team will host the Millikin University Holiday Tournament on Dec. 20-21 at the Griswold Center. Fri…

DECATUR -- The Millikin women's basketball team lost to Simpson College, 76-69, on Saturday in the finals of the Millikin Holiday Classic at t…

BLOOMINGTON — With two starters sidelined by health issues, the Illinois Wesleyan women's basketball team needed others to step up against res…

'Our goal is to control this area.' Millikin women's basketball hitting on local talent

Millikin women's basketball head coach Olivia Lett is putting a stranglehold on area talent and they have played or will play key roles for the team.

Bailey Coffman (32) takes a shot during practice on Tuesday at the Griswold Center at Millikin University. Coffman, a freshman, is the team's second leading scorer.

Abby Ratsch (40) shoots the ball at practice on Tuesday at the Griswold Center at Millikin University. Ratsch, a freshman, is the team's leading rebounder.

Jordan Hildebrand (23) heads to the basket at practice on Tuesday at the Griswold Center at Millikin University. Hildebrand is the team's leading scorer this season.