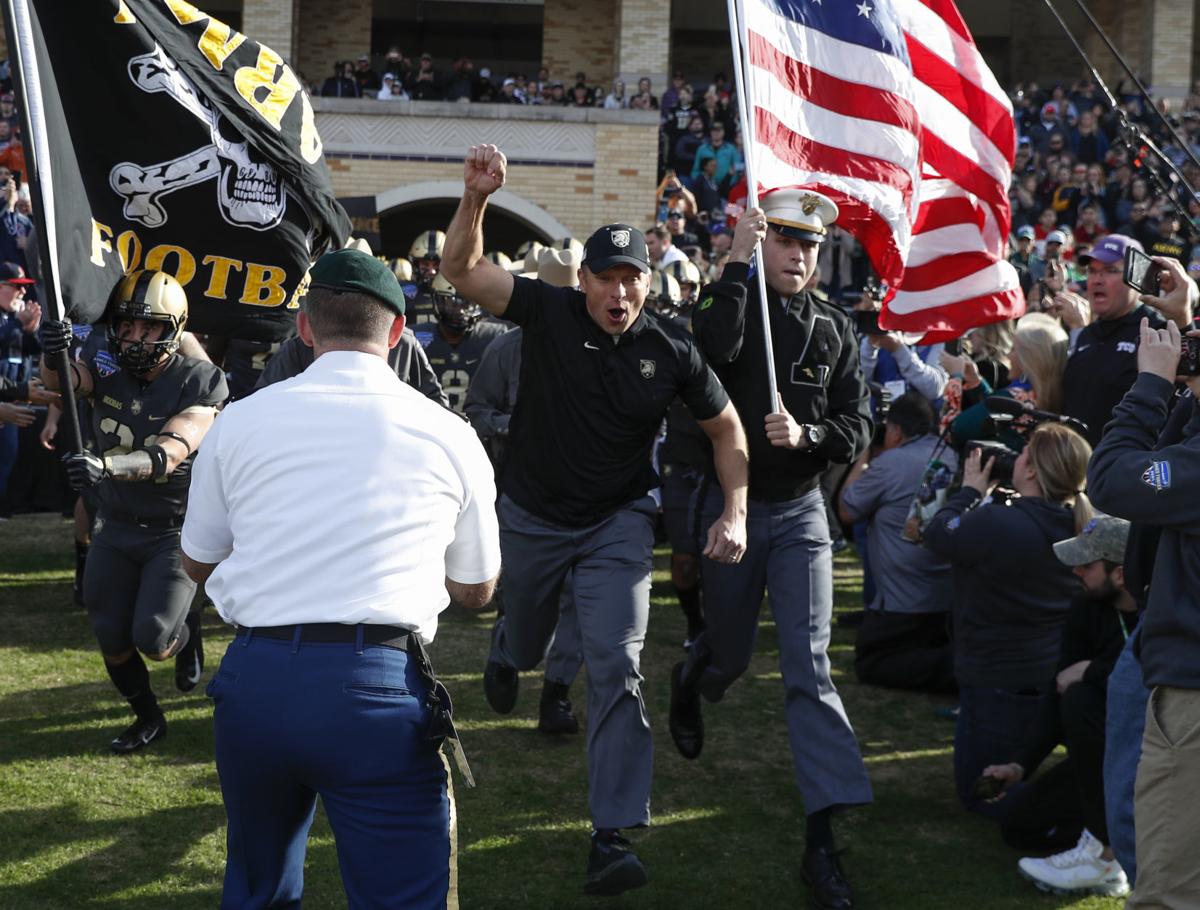 Army head coach Jeff Monken, center, leads his team onto the field prior to the Armed Forces Bowl against Houston, Saturday in Fort Worth, Texas. 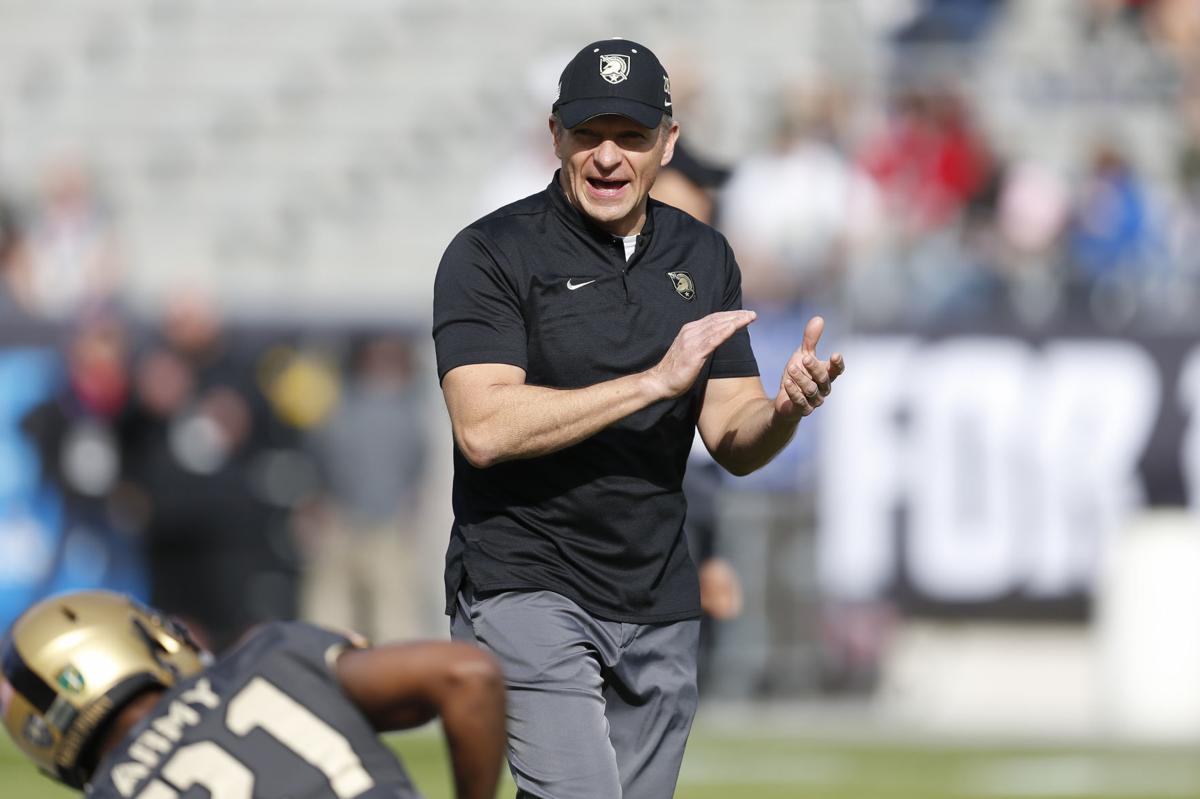 Army head coach Jeff Monken watches as his team warms up before they play Houston in the of Armed Forces Bowl Saturday in Fort Worth, Texas. 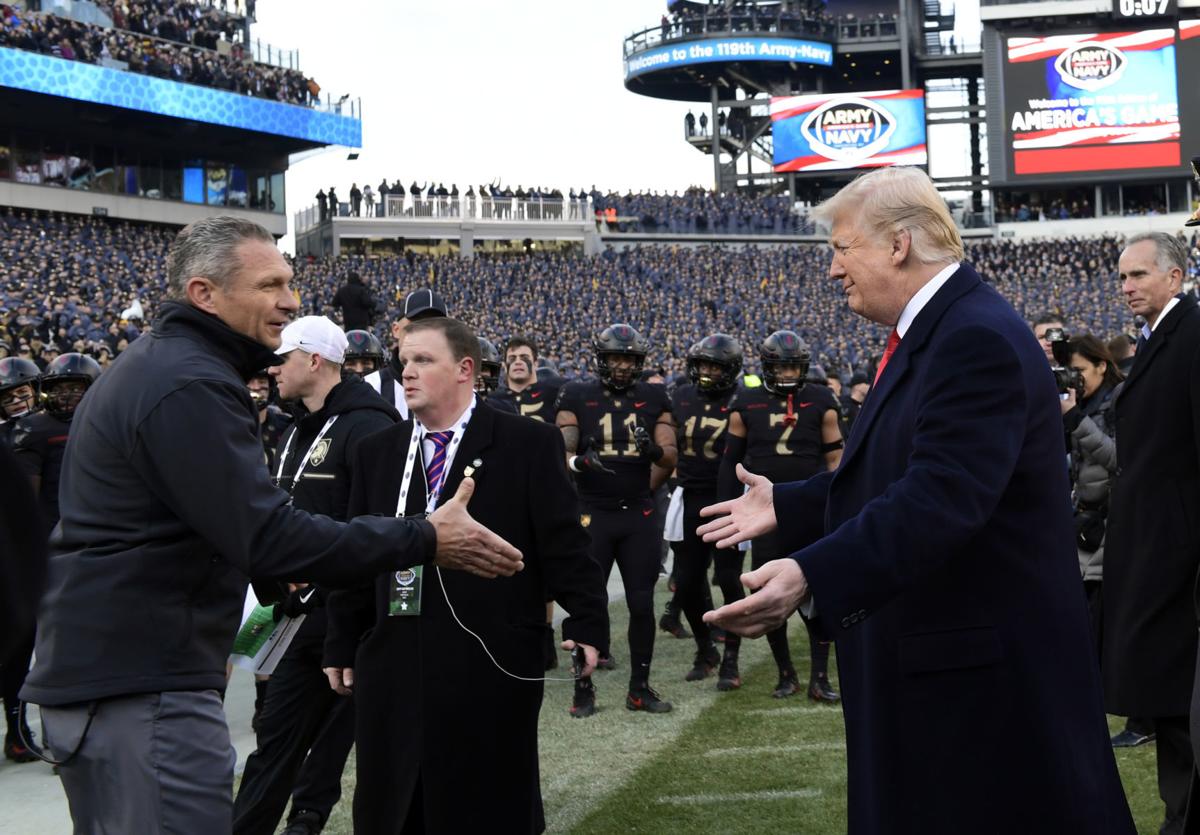 FORT WORTH, Texas — Army quarterback Kelvin Hopkins Jr. ran for 170 yards and an Armed Forces Bowl-record five touchdowns and the No. 22 Black Knights overwhelmed Houston 70-14 on Saturday to reach 11 wins for the first time in program history.

The Black Knights (11-2) are coached by Jeff Monken, a Millikin University graduate, who led the team to their ninth consecutive win since an overtime loss at playoff team Oklahoma exactly three months earlier.

In 2017, Monken led Army to its first 10-win season since 1996, including a win over Navy and a bowl win over San Diego State in the Armed Forces Bowl.

As a Millikin student, Monken was a wide receiver on the football team and he lettered twice in track and was co-captain of the 1989 track team. Monken was inducted into the Millikin University Athletic Hall of Fame in 2013. A native of Joliet, Ill., Monken graduated with a bachelor's degree in physical education from Millikin in 1989 and he is in his fifth season as the head coach at Army.

Hopkins had a nifty 77-yard TD run on the last play of the first quarter for a 14-0 lead. The junior quarterback initially ran right before cutting back the other way and alluding one tackler. He sent two other defenders sliding to the ground when he switched directions again back toward the middle of the field.

Houston (8-5) lost for the fourth time in five games since starting 7-1 and getting into the AP Top 25 poll for one week in late October. The Cougars suffered their most-lopsided loss in their 27 bowl games, and their biggest loss overall since a 66-10 loss at UCLA during the 1997 regular season.

Along with his 11 rushing attempts before coming out of the game midway through the third quarter when it was 49-7, Hopkins completed the first 1,000-yard passing season for Army since 2007. He was 3-of-3 passing for 70 yards, including a 54-yarder that set up one of his three 1-yard TD plunges. He also had a 2-yard TD run.

On the first play of the second quarter, Cameron Jones had a 23-yard fumble return for an Army touchdown after James Nachtigal forced the turnover when he sacked Clayton Tune.

While Hopkins had his left arm in a sling after the game, he said he was "a little banged up" and that it was just a precaution.

"He did a really good job of finding an initial opening because it was almost a busted play," Monken said. "It was not designed to go back that direction and he kind of skipped out of the way of a guy."

Army got 507 of its 592 total yards on the ground in its highest-scoring game this season — and the most points in the program's nine bowl appearances. The Black Knights won a bowl for the third consecutive year, including last year's Armed Force Bowl over San Diego State.

Tune, the true freshman filling in for injured playmaker D'Eriq King, was 21-of-32 passing for 230 yards and was sacked 10 times. He was responsible for both Houston TDs, a 3-yard pass to Romello Brooker in the second quarter and a 6-yard run with 6 1/2 minutes left.

Houston: The Cougars didn't have King or NFL-bound defensive tackle Ed Oliver. King, who will be back next season, was responsible for 50 touchdowns in 11 games before knee surgery. Oliver missed four games because of a bruised right knee, then skipped the bowl game to focus on preparing for the NFL draft.

Army: After a 10-loss season as freshmen, the Black Knights senior class won 29 games the past three seasons. They finished with back-to-back seasons of at least 10 wins. Army is an AP Top 25 team for the first time since 1996, the academy's only other 10-win season.

ELMHURST — With winds gusting to 35 miles per hour throughout the game Saturday, the Millikin and Elmhurst offenses had to abandon their air a…

DECATUR, Ill. – Millikin University’s Spring 2018 Commencement ceremonies for all graduating students will be held on the weekend of May 19-20.

DECATUR — A tired Millikin women's basketball team got a much-needed boost on Wednesday.

🎶 Music veteran plans master classes at Millikin. Here's what he wants to do.

DECATUR — The Millikin women's basketball team might have gotten off to a difficult start under new coach Olivia Lett, but the Big Blue finish…

Army head coach Jeff Monken, center, leads his team onto the field prior to the Armed Forces Bowl against Houston, Saturday in Fort Worth, Texas.

Army head coach Jeff Monken watches as his team warms up before they play Houston in the of Armed Forces Bowl Saturday in Fort Worth, Texas.