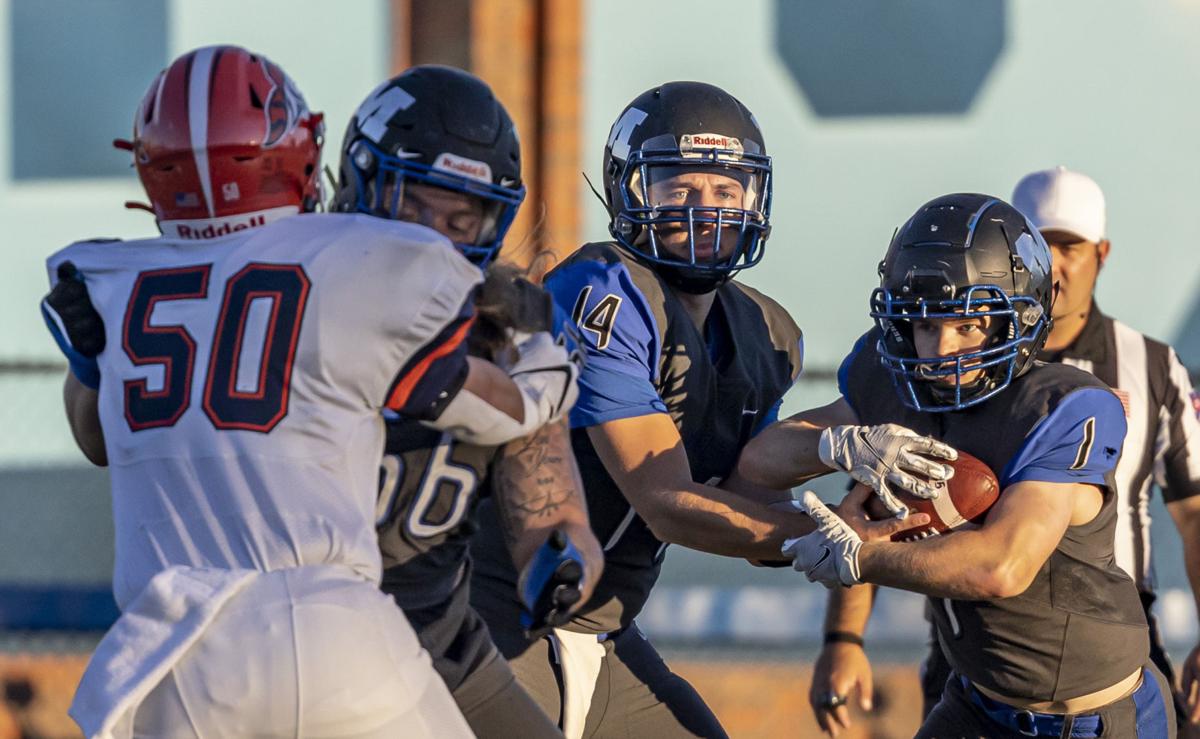 Millikin's Cal Pohrte (14) hands off to Tyson Roedl (1) in the first quarter at Frank M Lindsay Field on the campus of Millikin University. 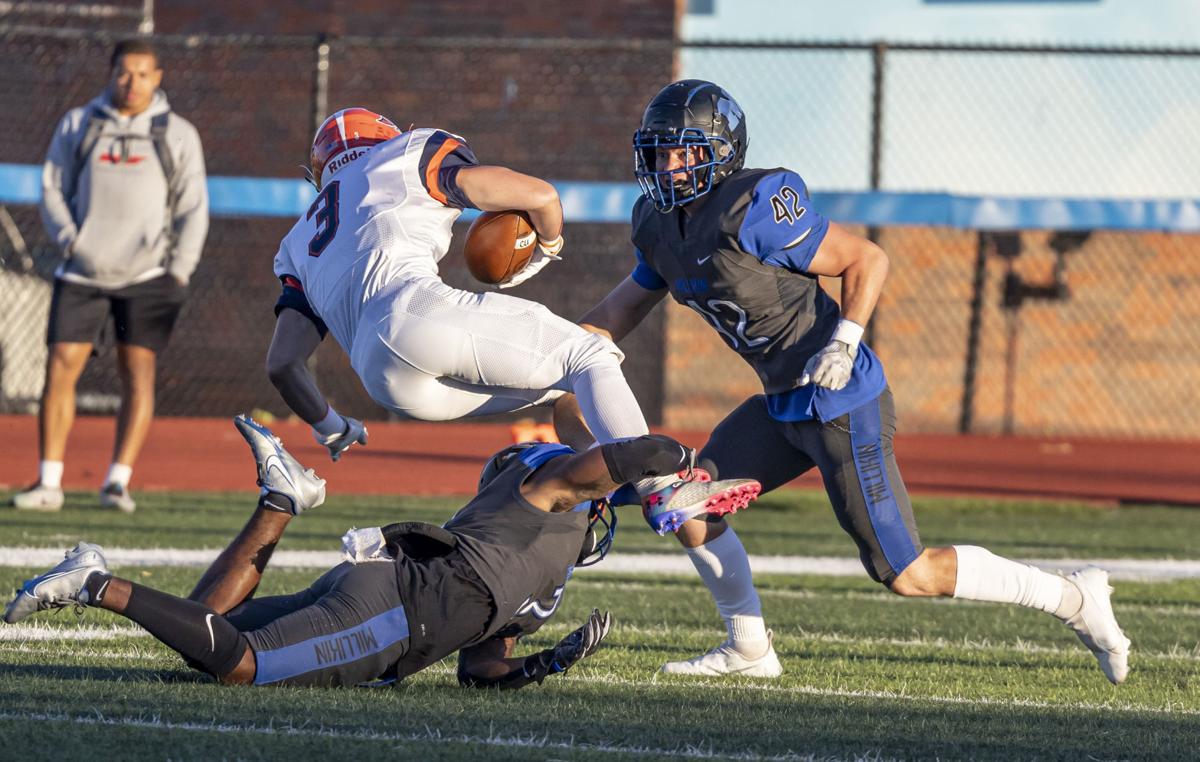 DECATUR — As Millikin running back Marion McGhee was suiting up for Saturday's home opener against Carroll University, he had some promises to keep.

In Week 2, the Big Blue staged a fourth quarter comeback and beat Augustana College in overtime to get their season back on track after losing in Week 1. McGhee missed the game because he was attending the funeral of his grandmother, Vera Eddie, in Tennessee.

Eddie was McGhee's biggest fan and she followed his on-the-field successes closely. McGhee decided that his Week 3 game was going to honor his grandmother and make up his absence to his teammates.

McGhee did that and more on Saturday, scoring five touchdowns on 89 yards rushing. He accounted for all of the Big Blue's scoring in a 32-25 win.

"Last week, I was gone to the funeral and so I missed the Augustana game, which was a really big game. The team stepped up and I told them that the next week I got them and I would win the game for them," McGhee said. "I did it all for my grandmother today and so it was a big game for me and the O-line. I was motivated a lot because my granny was special to me and the game was for her."

As McGhee returned, he met with Big Blue head coach Dan Gritti about the role he thought he could play on the team, especially around the end zone.

"I said to coach that I was one of his biggest red zone threats and he trusted me with the ball, so I got the TDs tonight," McGhee said.

At 5-6, 180 pounds, McGhee isn't going to barrel over defensive lines, but Gritti has confidence that the junior runner will find the open space if it is there.

"Marion is one of the best natural runners that we have ever had. He has a natural feel for the running back position," Gritti said. "He finds and sees things. His vision is second to none and that is what really separates him from other backs. His vision is legit. I know if there is a crease there, he is going to find it."

McGhee had a three-touchdown game in the spring against Augustana that included the game-winning score in overtime, but he hadn't had this type of explosive performance since high school.

"With the offensive line that we have and the older guys, I know that we can have big games like this. I didn’t expect to have five touchdowns but the offense line stepped up big today," McGhee said.

With standout wide receiver Colton Lockwood seeing consistent double-teams from the Pioneers, junior wide receiver Jahlil Lipkin had a breakout game, grabbing eight receptions for 160 yards. His long catch of the day of 51 yards, set up a McGhee score.

"If you just pay attention to Colton, we have more weapons than people think we do. With me and the other receivers, we showed that we can play," McGhee said. "I believe we have one of the best offenses in the conference."

Carroll head coach Mike Budziszewski was Millikin's offensive coordinator during McGhee's freshman season and showing his talents in front of his former coach was a positive for McGhee.

"It was great to show him that I can ball. He would have given me the opportunity if he would have stayed, but things happen," McGhee said.

Gritti added some twists to the playbook to keep the Pioneers from anticipating their schemes with their extensive knowledge of the Big Blue's systems.

"I thought that we were two evenly matched teams and it was going to be who executed better late that would win the game. That definitely was the case," Gritti said. "This week we were able to make a few plays at the end and that was the difference.

"We had a big loss in Week 1 and I think we lost people who thought we were over with. But we have turned it around and we have forgotten about Week 1. It is a whole new season," McGhee said. "We are going to go week-by-week, thinking about the next team and we start off 0-0 every week."

Watch now: Freshman setter Olivia Grbavac has stepped into the spotlight for No. 14 Millikin

The Big Blue won 27-21 to open their CCIW schedule.

Watch now: Monticello soccer putting the work in to be a winning program

The senior sweeper has 19 goals and 13 assists so far this season.

The Warriors were scheduled to face Clinton on the road.

The Big Blue are looking for a sweep of the conference’s Wisconsin-based programs.

The teams combined for 72 first-half points, as the Firebirds won 63-42.

Watch now: At 3-3, MacArthur football continues to thread the needle to a playoff berth

Lockwood has 510 yards receiving and seven touchdowns this season through four games. 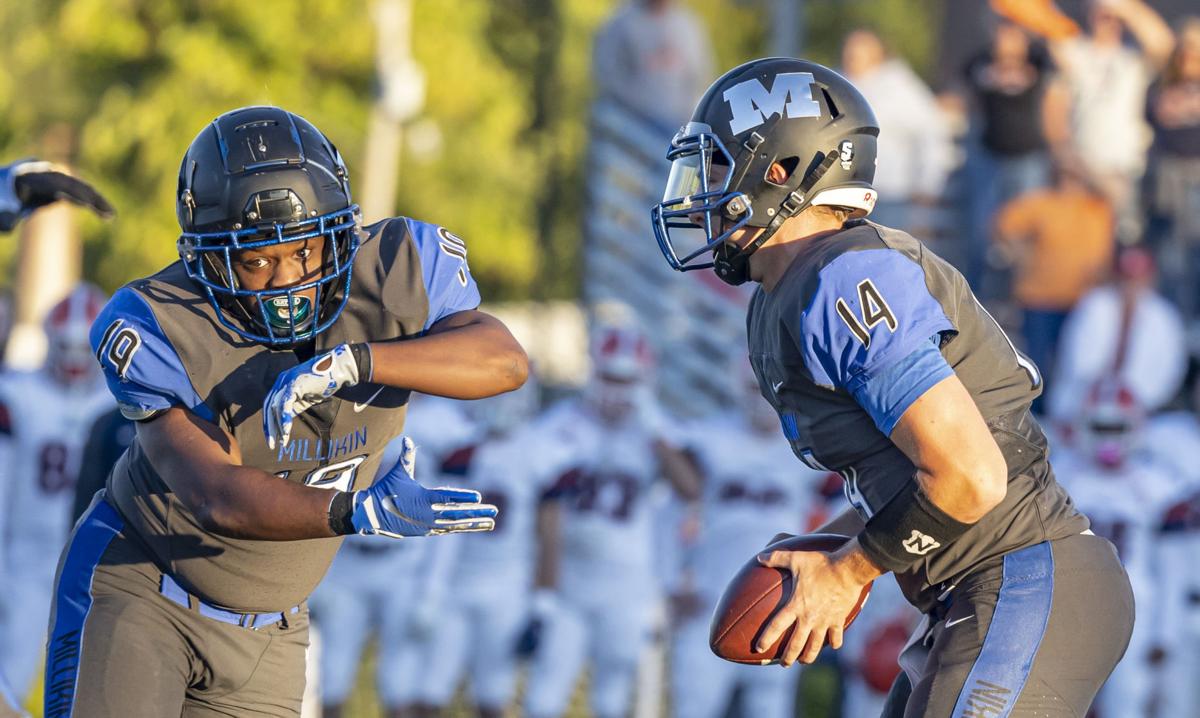 Millikin's Cal Pohrte (14) hands off to Marion McGhee (19) in the first quarter at Frank M Lindsay Field on the campus of Millikin University.

Millikin's Cal Pohrte (14) hands off to Tyson Roedl (1) in the first quarter at Frank M Lindsay Field on the campus of Millikin University. 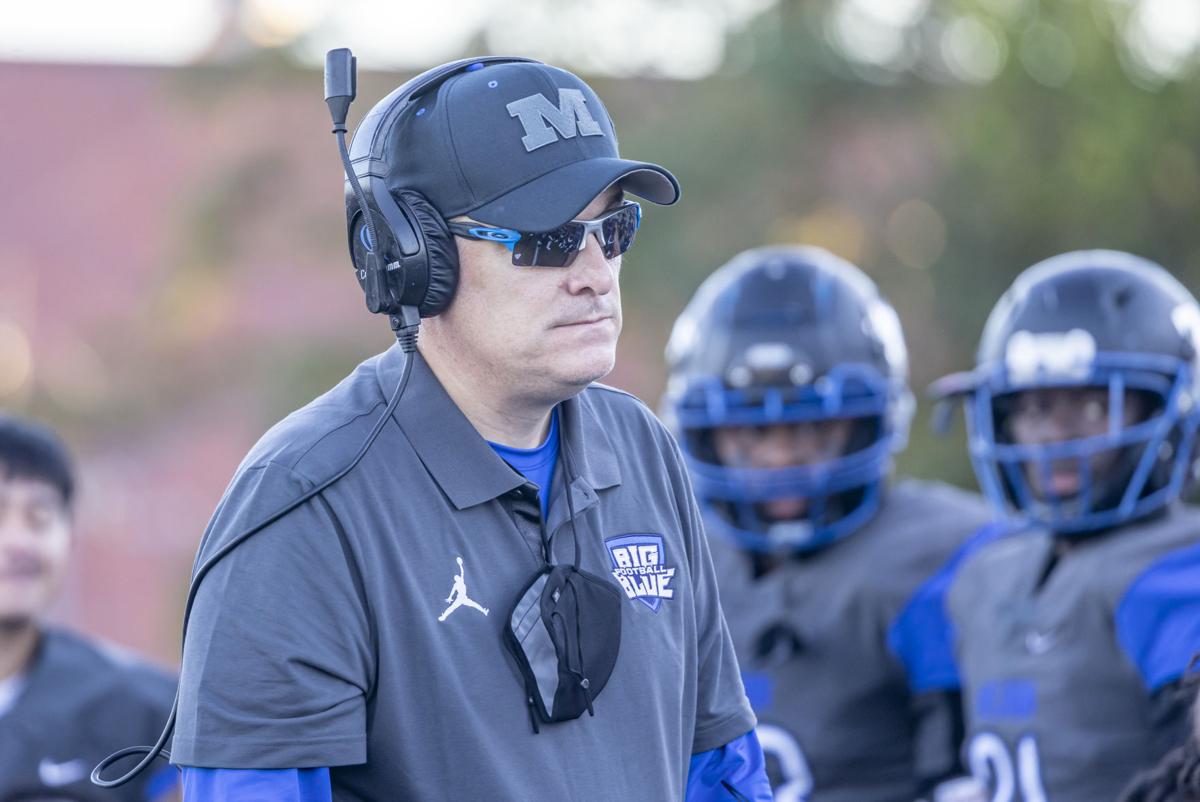 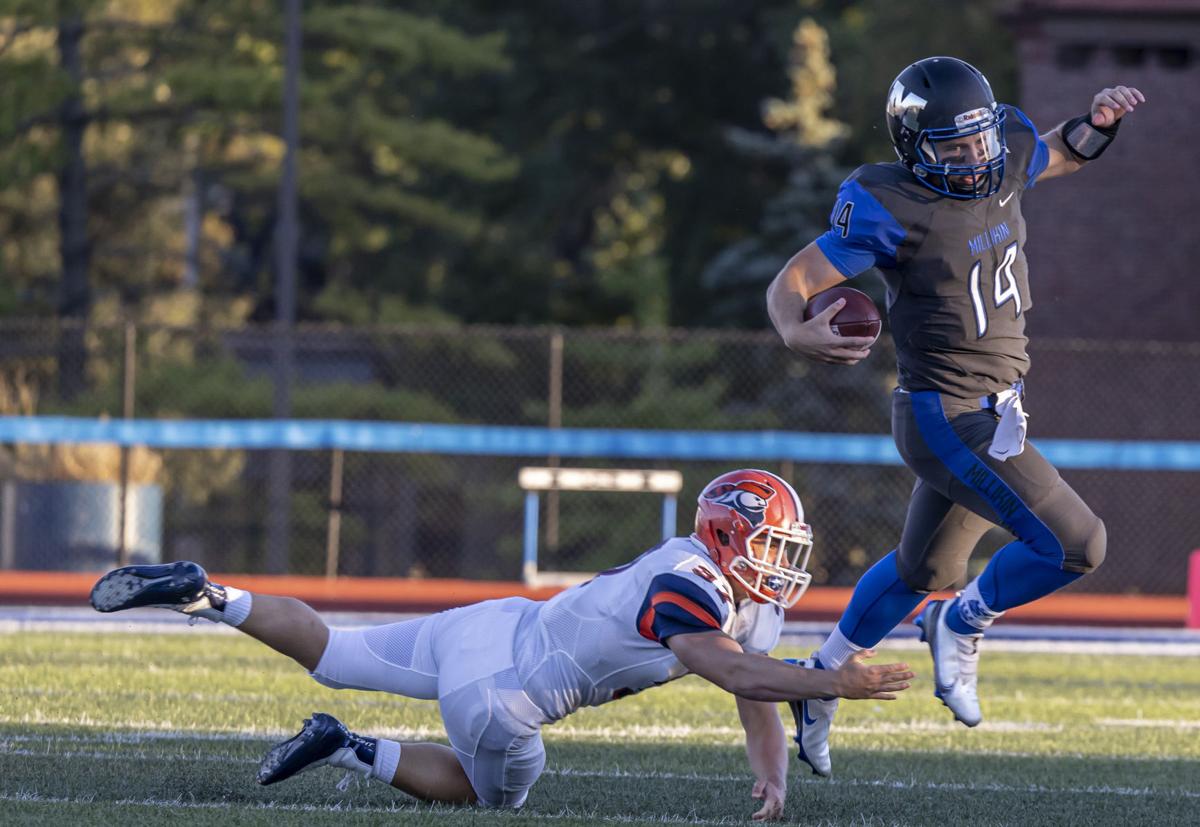 Millikin's Cal Pohrte (14) runs the ball in the first quarter at Frank M Lindsay Field on the campus of Millikin University. 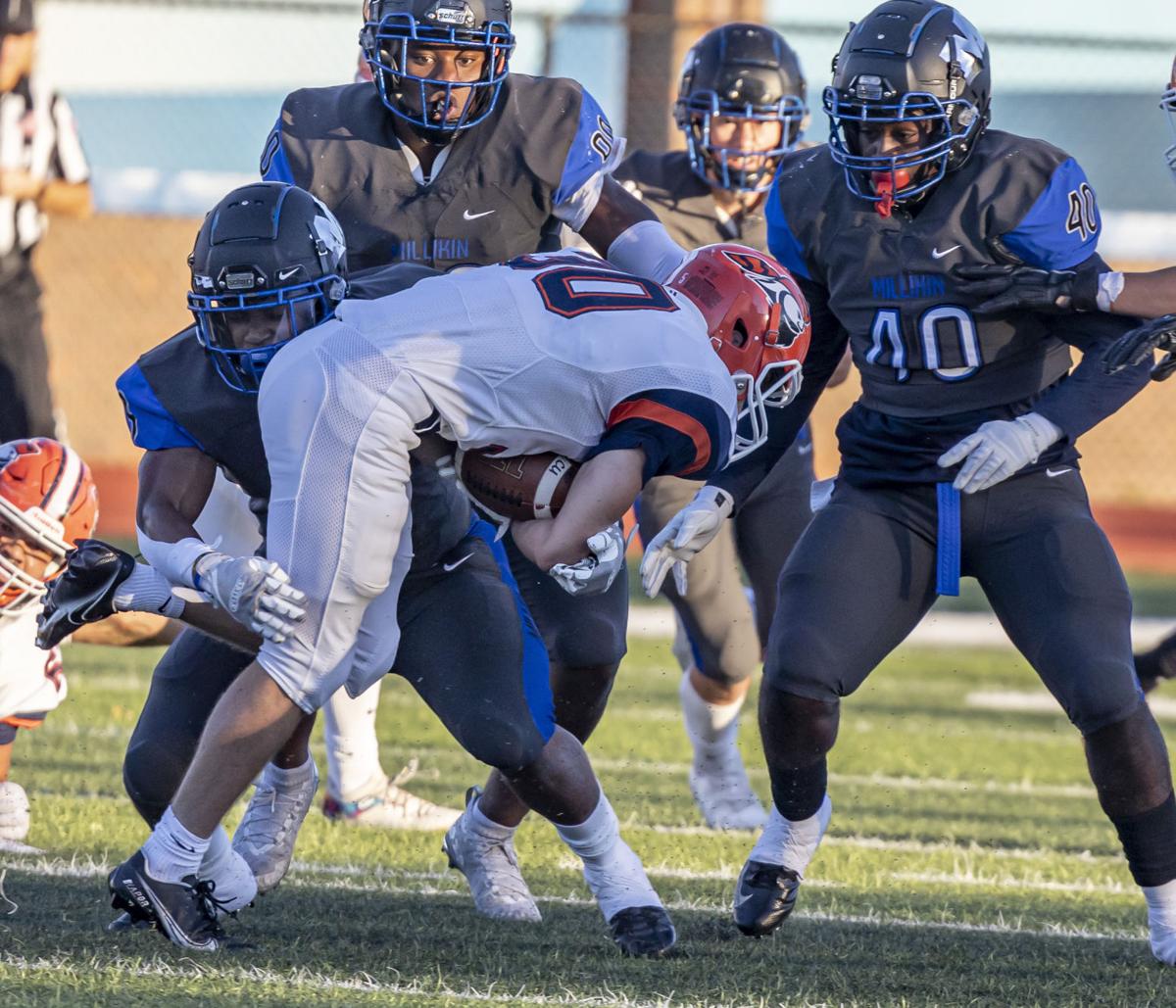 Millikin's Alexander Perkins (9) and others go into tackle Carroll University's Nick Legnaioli (30) in the first quarter at Frank M Lindsay Field on the campus of Millikin University.