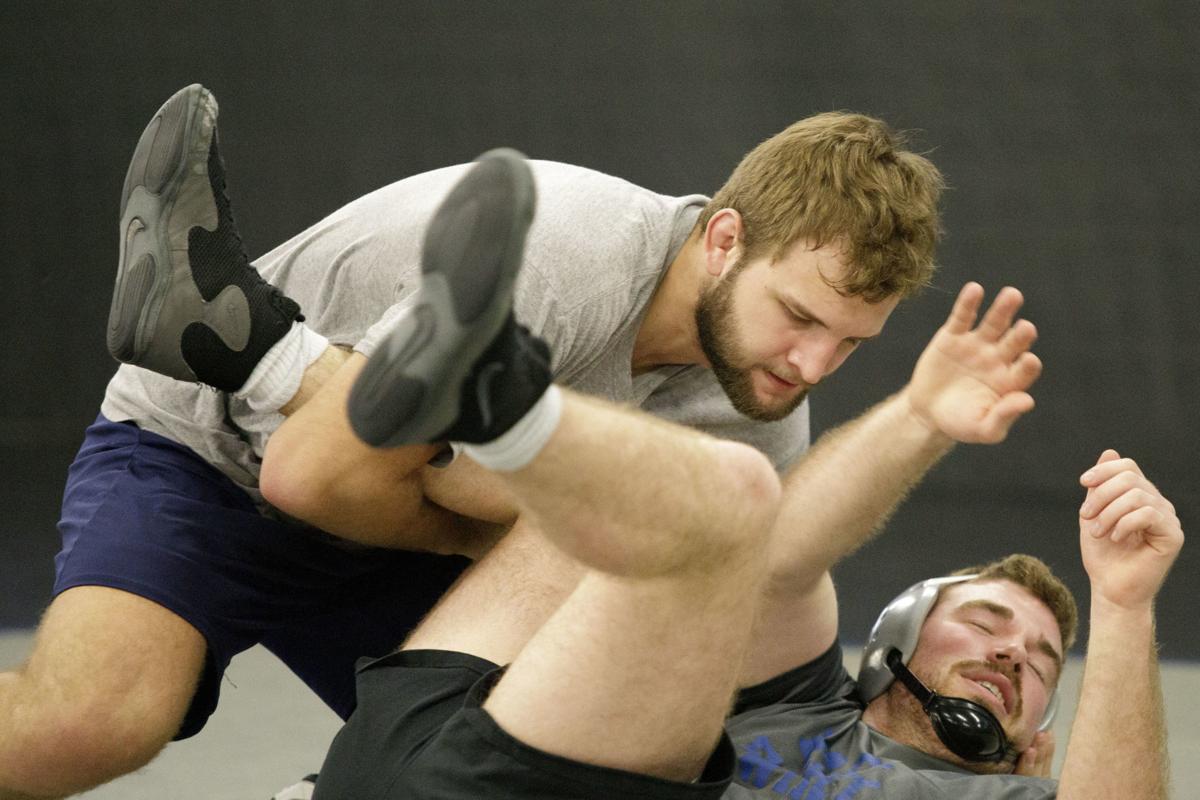 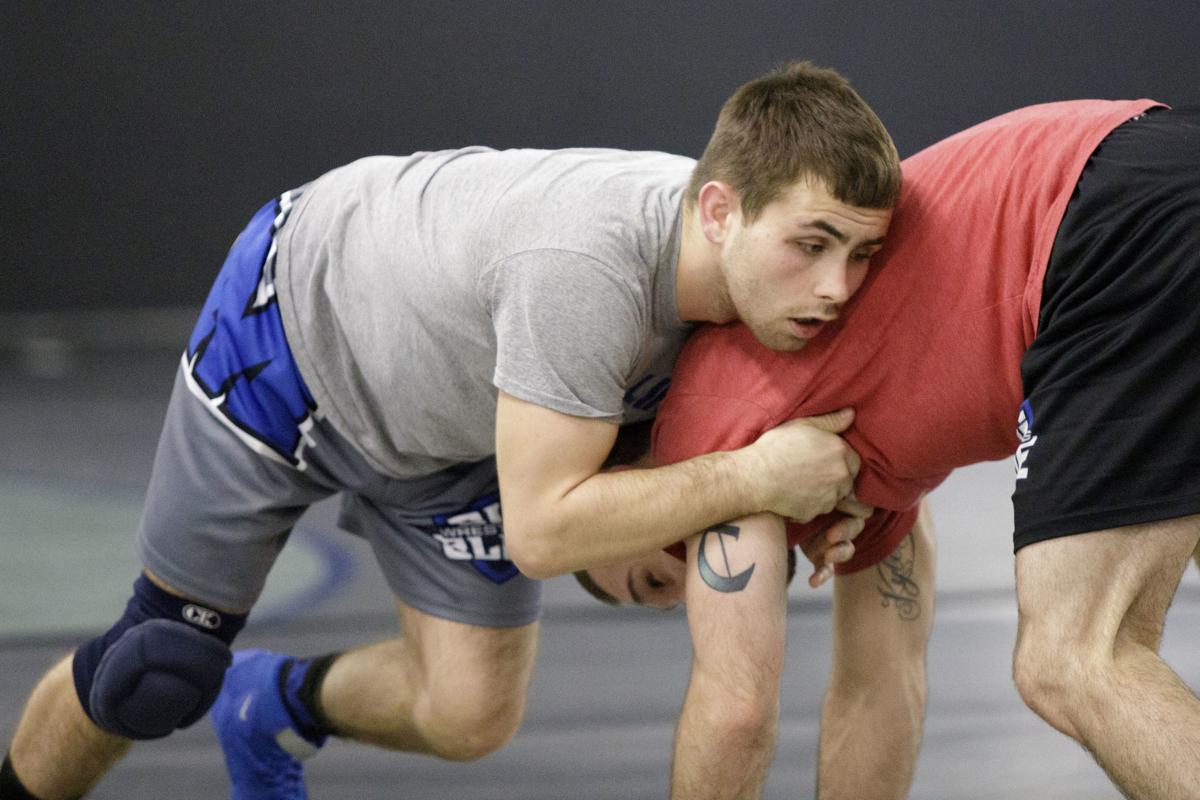 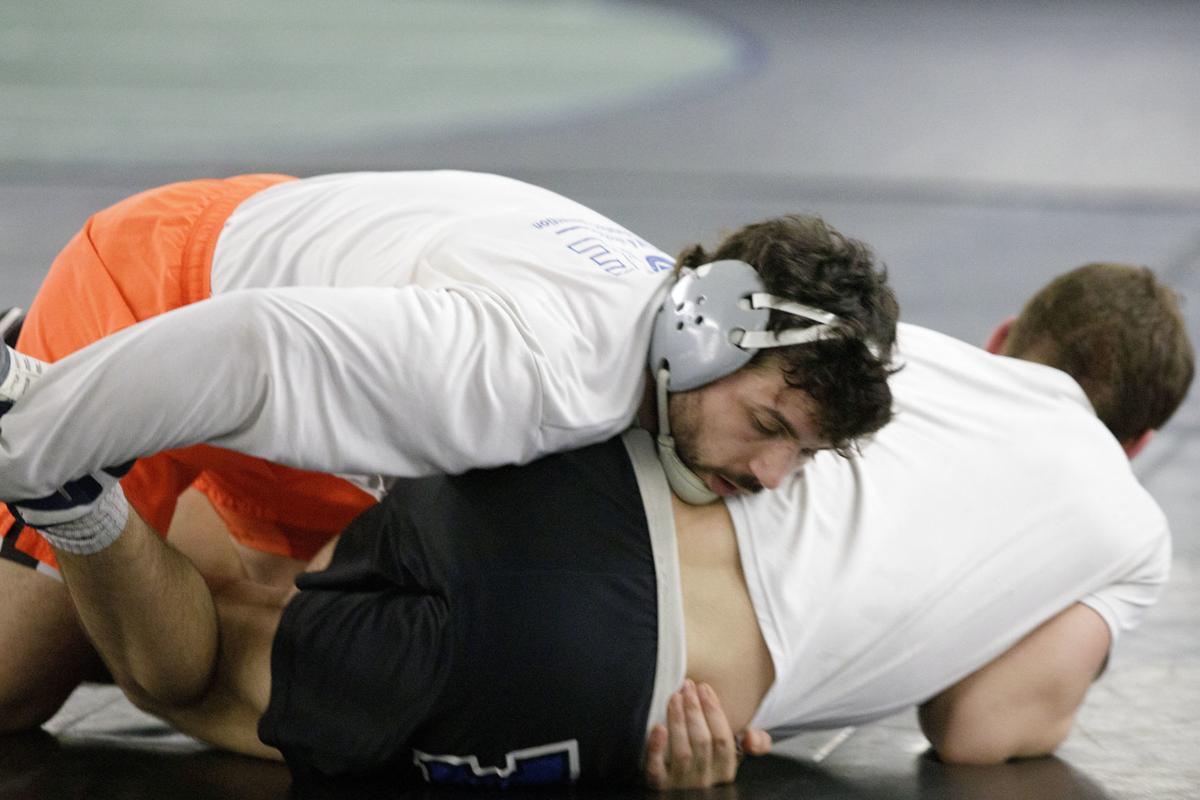 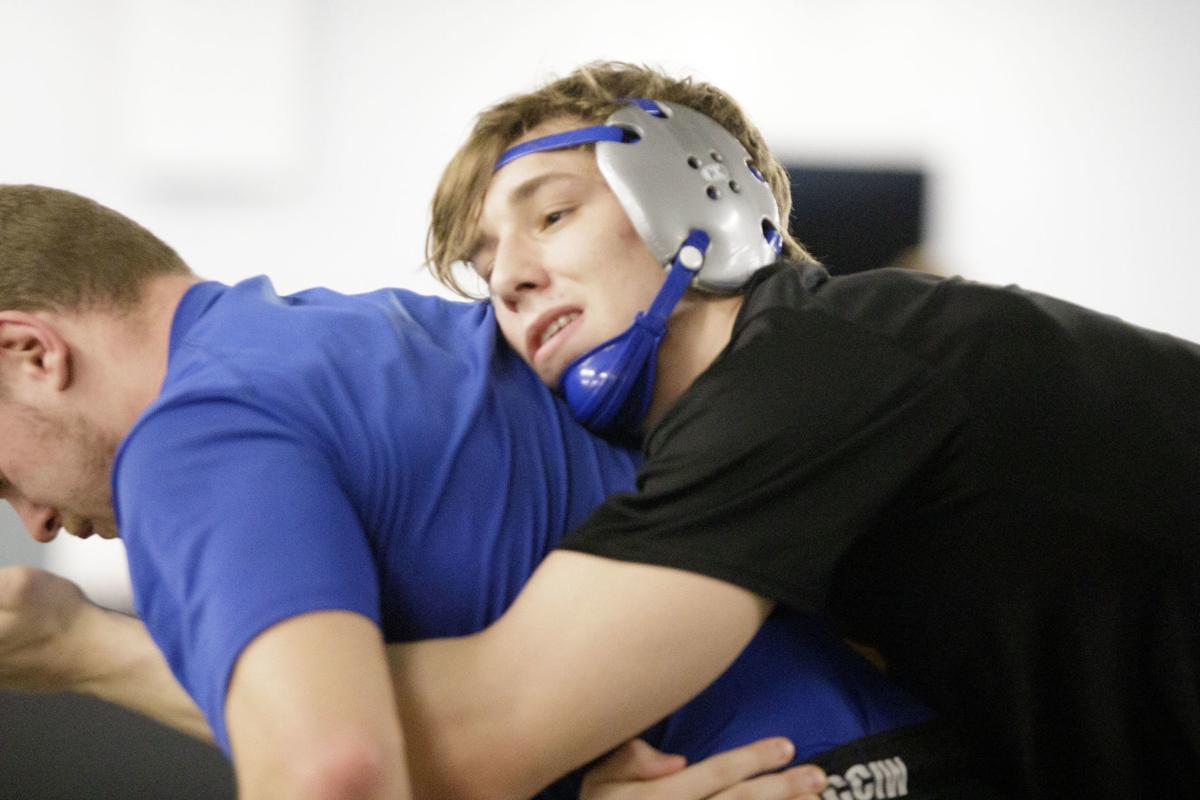 Millikin Bradan Birt wrestles at practice. Birt, along with three teammates, were at the NCAA Division III Wrestling Championships when the event was canceled due to the coronavirus. 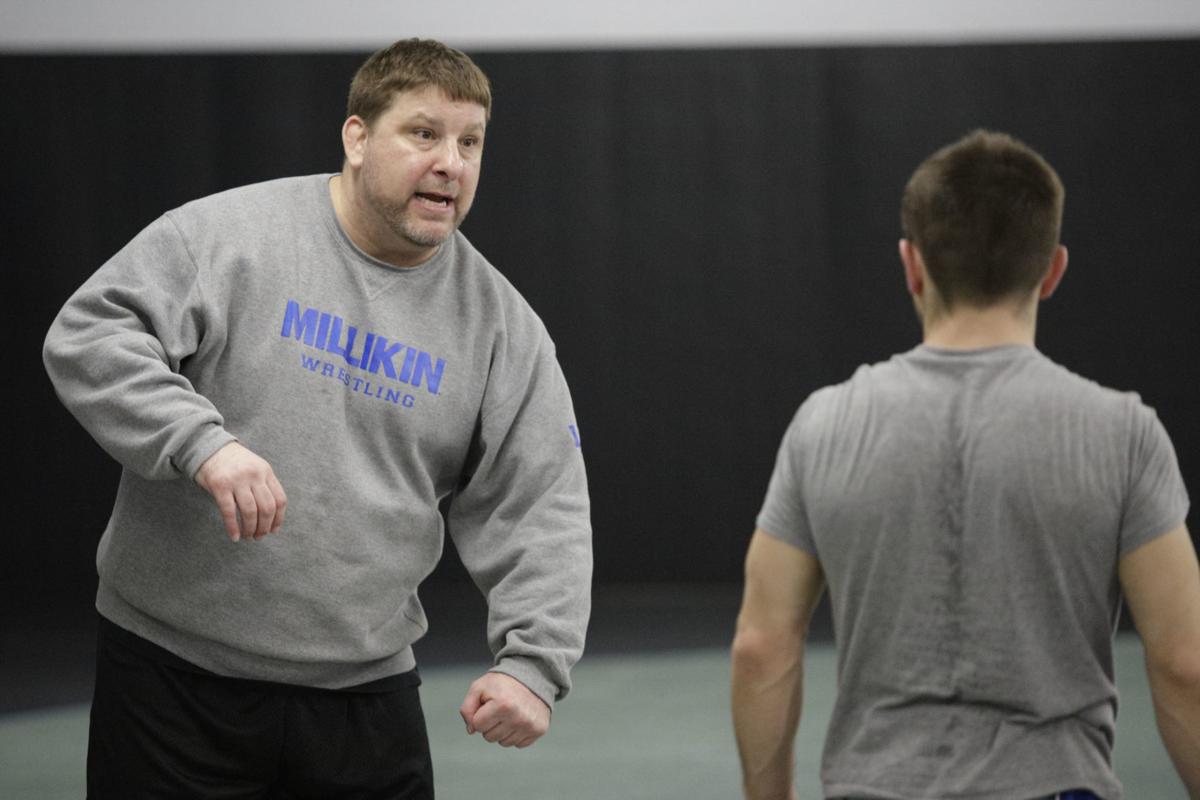 DECATUR — Never give up, never surrender.

It's the mantra of wrestling coaches across the country and Millikin's Logan Hagerbaumer embodied it perfectly at the NCAA Division III Lower Midwest regional two weekends ago.

The 197-pound wrestler was in the consolation championship with his season on the line. A win would mean a trip to the Division III championship beginning Friday in Cedar Rapids, Iowa. A loss would mean the end of his season.

Things were not looking good as Hagerbaumer was down three points with 14 seconds remaining against Kobe Woods of Wartburg College, the No. 4-ranked wrestler in the nation at 197 pounds, according to d3wrestle.com.

"It is a good example that you have to wrestle all seven minutes. He scored twice off of my attacks but that didn't stop me or my game plan," Hagerbaumer said. "I kept attacking the whole time and I'm really dangerous. I kept calm and I did what I've done a 1,000 times before and I got the fall. It was an amazing feeling when I got off the mat."

"You can't relax," Millikin coach Ryan Birt said. "There's a senior for another team whose career is over and he was winning. He took one second off and it was just too late for him. I'm excited for nationals. Four is the most we have ever gotten through a regional and we are excited."

Hagerbaumer, McGiffen and Blasioli qualified for nationals through wrestlebacks while Bradan Birt was undefeated and dominating while taking the next step to his goal of winning a national championship.

Birt, a junior, is already a two-time All-American with a sixth-place finish as a sophomore and seventh-place finish as a freshman at nationals. He ripped through the regional competition with ease, picked up a pin in 54 seconds in the first round and pinned his quarterfinals opponent at 3:36. Birt scored technical falls in the semifinals (17-2) and in the final (17-0) to earn his third consecutive trip to the national championships.

"I think I'm doing the best I can. I'm feeling perfect," Bradan Birt said. "(Going to nationals again) feels sort of similar but I think it is a little bit different because I do want it a little bit more than in the last couple of years. If I go out and wrestle my matches, I should be fine."

Ryan Birt, Bradan's father, can see a new level of focus in Bradan.

"Bradan is believing in himself and he's coachable," Ryan Birt said. "He's living that championship lifestyle. I think he is zeroed in and focused and we don't take anything for granted. We are laser focused and trying to score points and he's wrestling every match like it is his last."

McGiffen lost in the championship semifinals but regrouped in the wrestlebacks. It was a challenge for the wrestler but he is used to having it tough after recently returning to the sport after a five-year absence.

"I feel like the second day (of regionals) I didn't wrestle like I should have in getting that loss, but I'm glad I kept my head on straight because bouncing back from a loss is pretty tough," McGiffen said.

McGiffen was a three-time IHSA tournament qualifier for Alton High School and finished third at 189 pounds in 2010-11 and second at 2011-12. He had been considering attending Millikin for a while and started cutting down from 240 pounds to 174 last year.

"Coach Birt had been talking to me  to come wrestle but financially I couldn't really come," McGiffen said. "But I saved up some money and I started working out harder and dieting so I could have a chance at really bettering myself. It was a struggle as far as the mental process because you have to stay tough but it has been worth it."

For Blasioli, he has seen the impact of the Millikin wrestling program first hand. His cousin, Chris Williams, became a four-time All-American for Millikin before becoming an assistant coach in 2019.

"Seeing the success Chris had here is what brought me up here," Blasioli said. "It changed him, it changed his life and it has brought him his career."

Blasioli won the 2016-17 IHSA state championship at 132 pounds for East Alton-Wood River High School and was in the same wrestling club as McGiffen growing up.

"Taylor and Logan are tough wrestlers and I look up to Taylor especially since we are from the same area. Bradan is super-human -- that's what I call him -- and he is an animal," Blasioli said.

Said McGiffen: "I think the sky is limit for us (at nationals). With the four of us going to nationals and all returning next year, we aren't going to have that pressure but we are going to have that leadership role to have the younger guys look up to us. We could be a top-five team in the nation next season and that's huge."

Matthew Flaten's complete coverage of the 2019-20 wrestling season, including features on MacArthur, Warrensburg-Latham, Mount Zion, Shelbyville and Argenta-Oreana wrestlers as well as coverage of the regional, sectional and state tournaments.

CHAMPAIGN — It was a moment that Mount Zion senior wrestler Lukas Eagle had never experienced before.

CHAMPAIGN -- Warrensburg-Latham's Adam Maxwell found wrestling through being a fan of WWE.

The next men up: Mount Zion wrestling looks to make big splash in 1A

The Braves are competing in the Class 1A Jacksonville Regional on Friday and Saturday.

The turf is down, the blue seats are in place and the Big Blue are ready to open their home schedule and play the first game at their new home at 10 a.m. Saturday against St. Norbert College.

One goal in mind: Millikin's Bradan Birt is focused on a wrestling national title

DECATUR -- Millikin's baseball team made the most of their historic day Saturday as the Big Blue came out swinging against St. Norbert College…

DECATUR — In the moment, Jorden Tedford could only ask why?

Millikin wrestler Bradan Birt felt this year's trip to the NCAA Division III Championships was going to be special.

After canceled season because of coronavirus concerns, Millikin baseball begins to regroup for 2021

The Millikin baseball team had their inaugural season at Workman Field cut short because of the coronavirus as coaches try to regroup for 2021.

Millikin Bradan Birt wrestles at practice. Birt, along with three teammates, were at the NCAA Division III Wrestling Championships when the event was canceled due to the coronavirus.