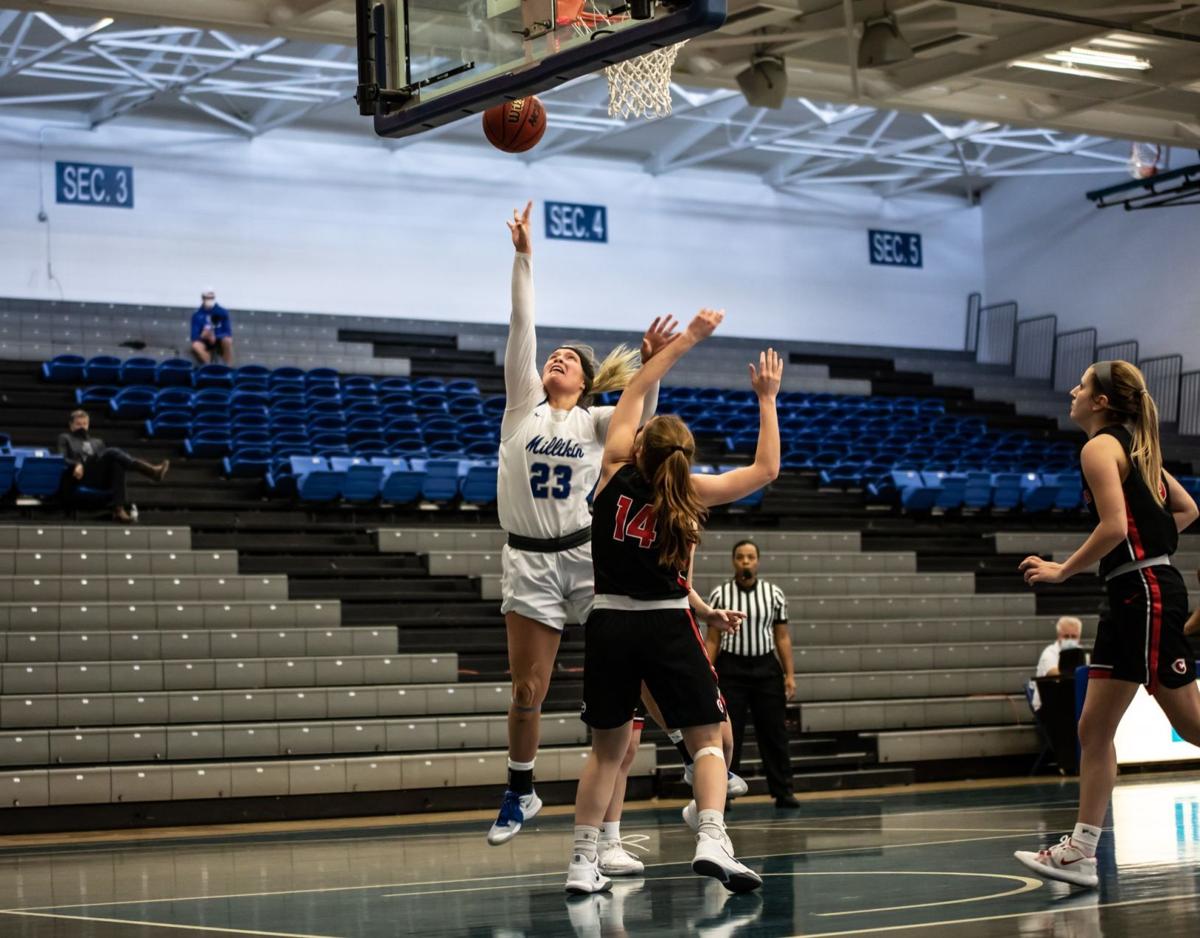 Millikin's Jordan Hildebrand (23) goes to the basket against Carthage College's Bridget Barrett on Saturday at the Griswold Center. 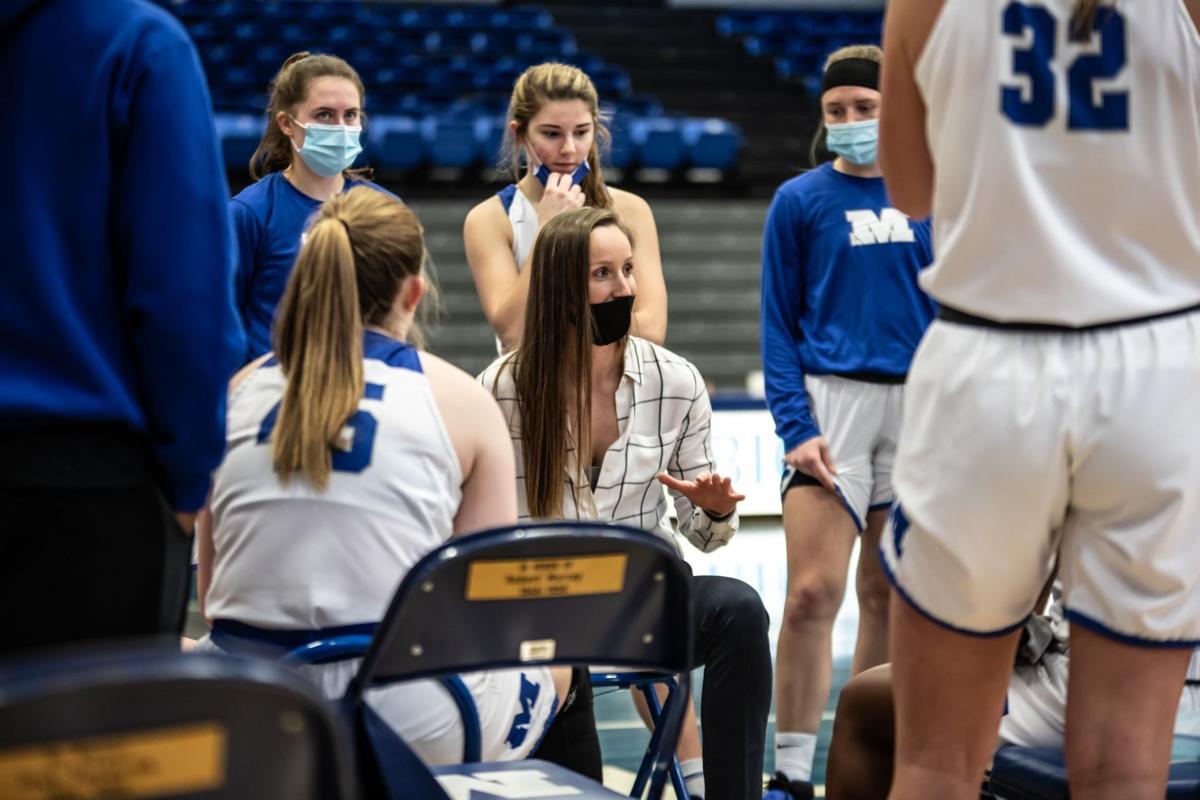 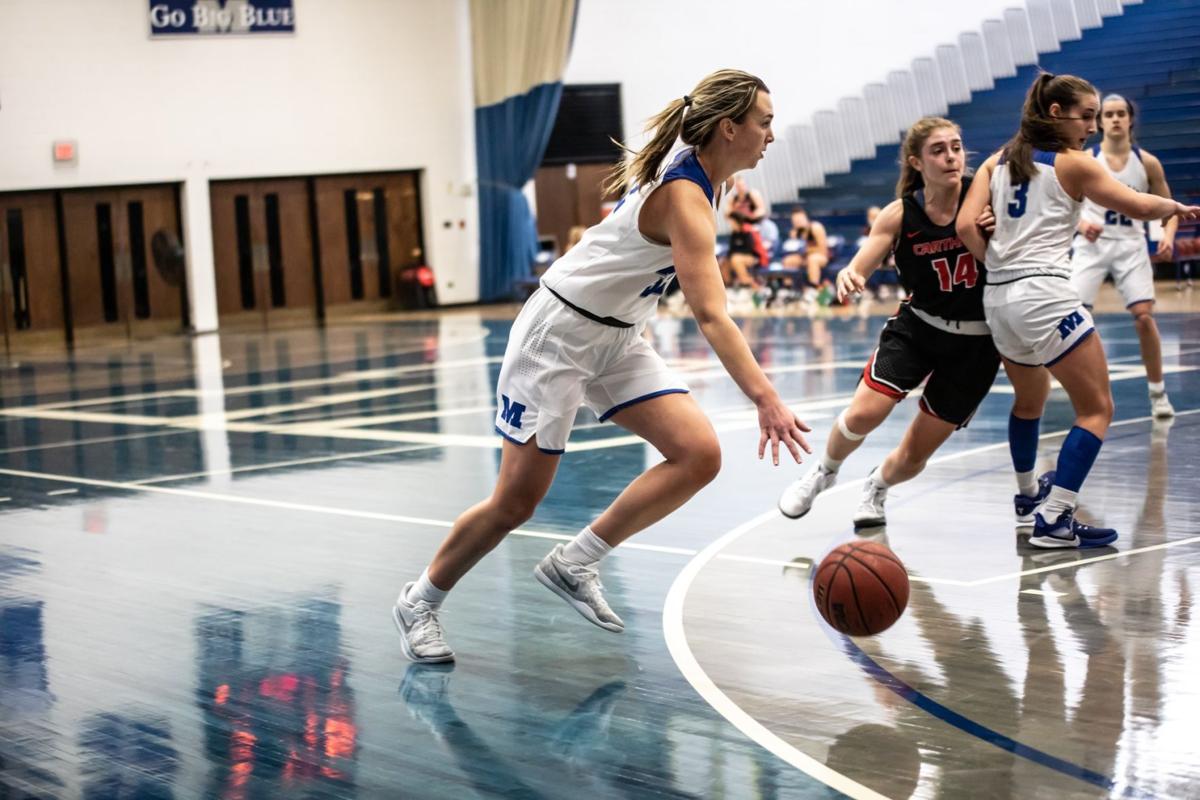 Millikin's Bailey Coffman heads to the basket against Carthage College on Saturday. Coffman led the team with 17 points in the 77-66 victory.

DECATUR -- It was the start to a season that players and coaches dream about.

Millikin's offense was clicking -- 22 points in the first quarter -- and defense was just as strong -- Carthage was held to eight first quarter points -- as the Big Blue women won their season debut, 77-66, Saturday at home.

"I was feeling crazy. It's been a long time and we've been practicing for today for a long time. The excitement of today was through the roof," Millikin senior Jordan Hildebrand said. "I think it went well and our adrenaline was rushing for the occasion. I think we played a lot as a team. It was our first game in 11 months, so I think we stepped up pretty well.

"I think we all shared the ball well and the points were distributed pretty well. I don't think anyone tried to take it on themselves. Everyone got their share," Hildebrand said. "I think (opponents) can't narrow in on any individual player when were all scoring like that. That makes us hard to guard."

Carthage shot 7-for-28 in the first half (25%) and Millikin head coach Olivia Lett stressed the importance of the team's defensive performance in practice.

"I think we wanted to go in and focus on us. That's what we talked about a lot and honestly, we didn't do a lot with the (Carthage) scouting reports," she said. "We were prepared for some of the places that they were going to attack and I think that we had a really good focus defensively. That's what we wanted to pay attention to, how hard where we going to go in defense. We can't control if every shot was going to go in but defensively we can control our effort."

Millikin freshman and Tolono Unity star Elyce Knudsen knocked down the first basket of her college career on a 3-pointer that served as the first points for the Big Blue this season. She finished with 11 points, four rebounds and two assists in her college debut.

"Elyce is a special player and I think everyone knows that. She went through some rough things today with (seven) turnovers and I think the whistle didn't go her way today," Lett said. "I'm not sure if people could tell from the live stream how well she can handle the basketball. When we see a night that she really finds her groove, I think people are going to be even more impressed by that."

Although there were no fans in the stands at the Griswold Center, the Millikin bench made it feel like a large group was cheering those on the court.

"Our bench was unbelievable today and that was the first thing I said when I walked in at halftime was our energy was great," Lett said. "We talked about if you are active on the bench, then you're going to be ready when you get in the game that pace of the game and that intensity is not going to a surprise to you. They all really bought into that."

Millikin was strong on the boards -- outrebounding Carthage 31-19 --and were just as solid from the free-throw line, making 18-of-23 attempts.

"We were huge on the boards and I thought Jordan was really good. Our littles got in there and they offensive rebounded like crazy," Lett said. "We had 13 offensive rebounds and that is a lot. It's hard for people to box us out if you had that many people crashing."

Carthage chipped away at Millikin's lead in the third and fourth quarters and a Coshun layup with 5:37 left made it 65-57. Millikin responded with a 3-pointer from Staton and two Coffman free throws had the lead back up to 70-57.

"In the CCIW, you can't take a lead for granted and you have to stay steady the whole game," Hildebrand said. " The CCIW is full of good teams that will chip away. I don't think you can ever let up on the game."

The unusual CCIW schedule with have the Big Blue face Carthage again on Monday, this time in Kenosha.

"(Carthage) is a really well-coached team and (head coach Tim Bernero) is going to be able to look at that second half and dice it up and try to take advantage of some of the things that we do," Lett said. "We wanted to make sure (our pace and intensity) were making everything difficult for them, so they're not excited about having to turn around and play us again on Monday.

"I think we left them a little bit of hope, so we've got to make sure from the tip off on Monday every play has that same intensity. We can't roll in there with an ‘we've already done this’ attitude."

Millikin men fall to Carthage on the road

Millikin was led in scoring by Jarius Ingram with 20 points followed by Calvin Fisher with 17.

The Big Blue will make their home debut on Monday against Carthage at 6 p.m.

Millikin has set its football schedule, but is still finalizing volleyball and soccer.

The passing of Hank Aaron last week was felt throughout the country as friends, family and fans mourned the passing of baseball's former home …

After postponements, Millikin men's and women's basketball return to the court against Wheaton College

DECATUR — Following a tough road loss to open the season against Carthage, the Millikin men’s basketball team returns to the court to face Whe…

DECATUR -- The Millikin men's basketball team lost to Wheaton College in CCIW action 82-61 on Thursday at the Griswold Center.

WHEATON -- The Millikin women's basketball team lost to Wheaton, 90-83, on Thursday at the King Arena in Wheaton.

The Millikin men's basketball team started off strong but couldn't hold off Wheaton College on Saturday, 67-58, on the road.

Millikin's Jordan Hildebrand (23) goes to the basket against Carthage College's Bridget Barrett on Saturday at the Griswold Center.

Millikin's Bailey Coffman heads to the basket against Carthage College on Saturday. Coffman led the team with 17 points in the 77-66 victory.