DECATUR — Before the Millikin women's basketball team took the court against Elmhurst on Saturday at the Griswold Center, the Big Blue honored their two seniors, Jordan Hildebrand and Aubrey Magro.

Hildebrand has been a steady leader with 12.6 points and 6.5 rebounds per game but Magro, who was a co-captain last season, has missed all of this year with a knee injury. Magro started the game for the tipoff before being subbed out, a moment that was emotional for her and her team.

"Aubrey was my first commit and I've known her since she was 16. It was a little emotional for me as well," Millikin head coach Olivia Lett said. "It was cool to give her a chance to end her career on the court and I don't think she expected it to hit her that way. I think our team responded really well to that and used that for energy."

Millikin used that inspiration to break out to a 28-9 lead at the end of the first half and a 39-26 advantage at halftime. Behind 14 points from Elyce Knudsen and 12 from Aubrey Staton, Millikin won comfortably, 70-59.

"I think that it was great today and I felt really good. I was just having that confidence," Staton said. "Some days you might have a really off game and some days you have a really good game. It is important to know that you are a consistent shooter and that it is going to go in eventually."

The loosening of COVID rules by the CCIW allowed Hildebrand to have her family in the stands to see her game for the first time this season.

"It was awesome. I was so excited for them to be here and it was a different feeling (having them here)," she said. "My dad plays a big role in everything I do with basketball, so having him here was awesome."

"We have had a lot of ups and downs. We have had games where we have scored 90 and games where we have scored 50," Lett said. "I think that is a little bit being a young team and also not having a non-conference schedule to work out some of those things. When you get thrown into our conference schedule, it is tough to figure out how to run our offense and how to run our defense."

Lett has been focusing on spreading the team's minutes throughout the lineup to get everyone some rest before the postseason.

"We definitely want to be a team that gets out and runs. (Coach Lett) doesn't want us to play a lot of minutes and if we can spread the wealth, that is best," Staton said. "It makes us hard to guard when we have multiple people scoring in double digits. That is hard to key in on."

Staton, a junior, looks to Magro for advice — the senior has become an ad hoc assistant coach while recovering from her injury.

"Having Magro on the bench for us has been great this season. Obviously, we want her on the court with us but what's best for her is to sit out," Staton said. "Just having her leadership and advice when I come out of the game and telling me, 'Hey, you need to do this a little bit differently.' She is someone who knows that game really well and she wants the best for us.

"You really don't know how much the game means to you until it is taken away from you. I think everyone kind of knows that this season."

Millikin staged a late rally in the final two minutes of the game, but fell short against Elmhurst (4-1) on the road.

After Millikin (1-9) took an early lead, the Bluejays gained control of the first half and lead 33-30 at halftime. The Bluejays led 73-63 with two minutes remaining before the Big Blue staged its late rally.

A Jake Hampton basket for Millikin made it 80-79 with six seconds remaining and a free throw from Elmhurst's Ocean Johnson made it 81-79. The Big Blue's game-tying shot was off the mark giving Elmhurst the two-point victory.

DECATUR — After opening the season with a 4-1 record and earning the No. 13 spot in last week’s D3hoops.com Top 25 poll, the Millikin women’s …

DECATUR — Millikin senior Bradan Birt was named the CCIW Wrestler of the Week on Tuesday.

Millikin women’s basketball stumbles on the road at North Central

BLOOMINGTON -- The Millikin men's basketball team lost at Illinois Wesleyan, 86-71, on Thursday at the Shirk Center in Bloomington.

DECATUR — As a freshman on the Millikin women's basketball team last season, Effingham graduate Miranda Fox was expecting to get about 15 minu…

For the Millikin football team, one long wait deserved another. 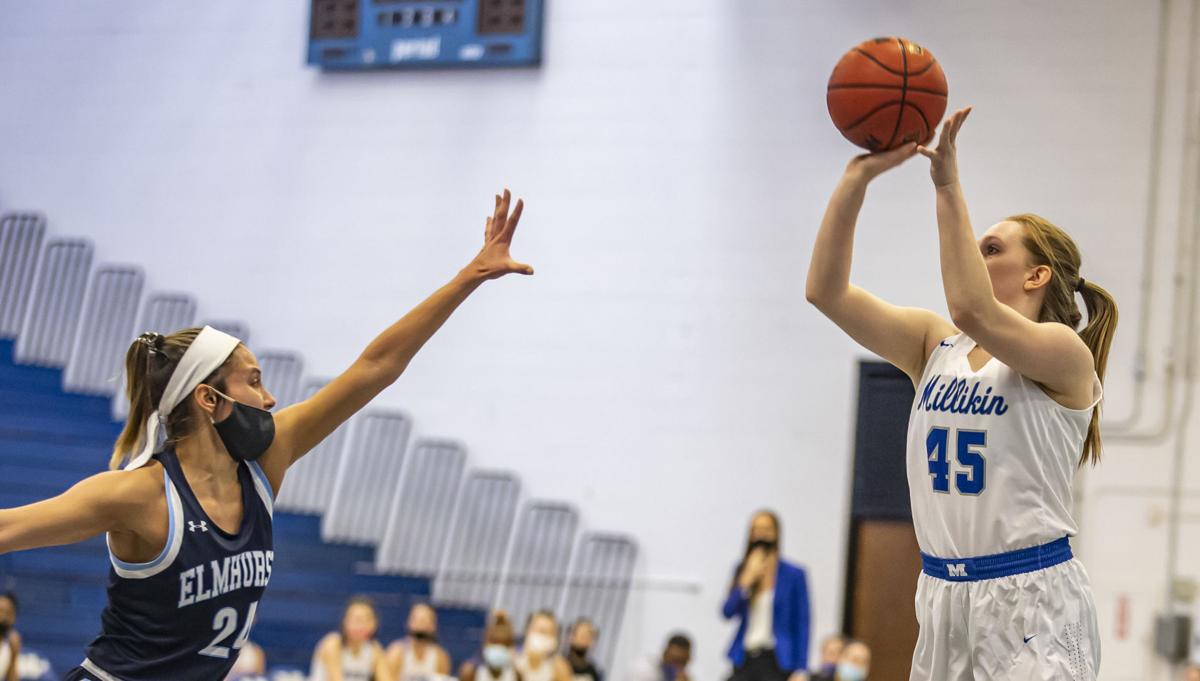 Millikin University's Aubrey Staton (45) hits a three during the game against Elmhurst University. Visit www.herald-review.com to see more photos and videos from the game. 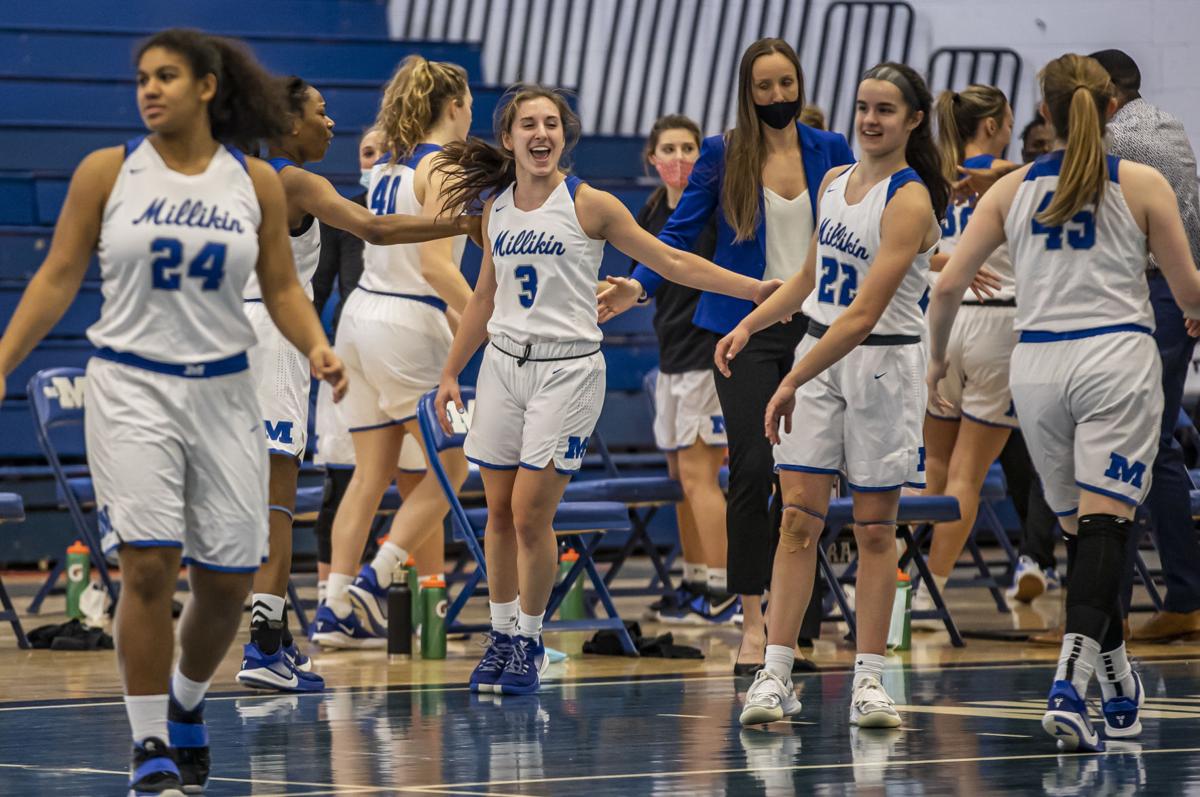 Millikin University's Miranda Fox (3) cheers teammates during the game against Elmhurst University. Visit www.herald-review.com to see more photos and videos from the game. 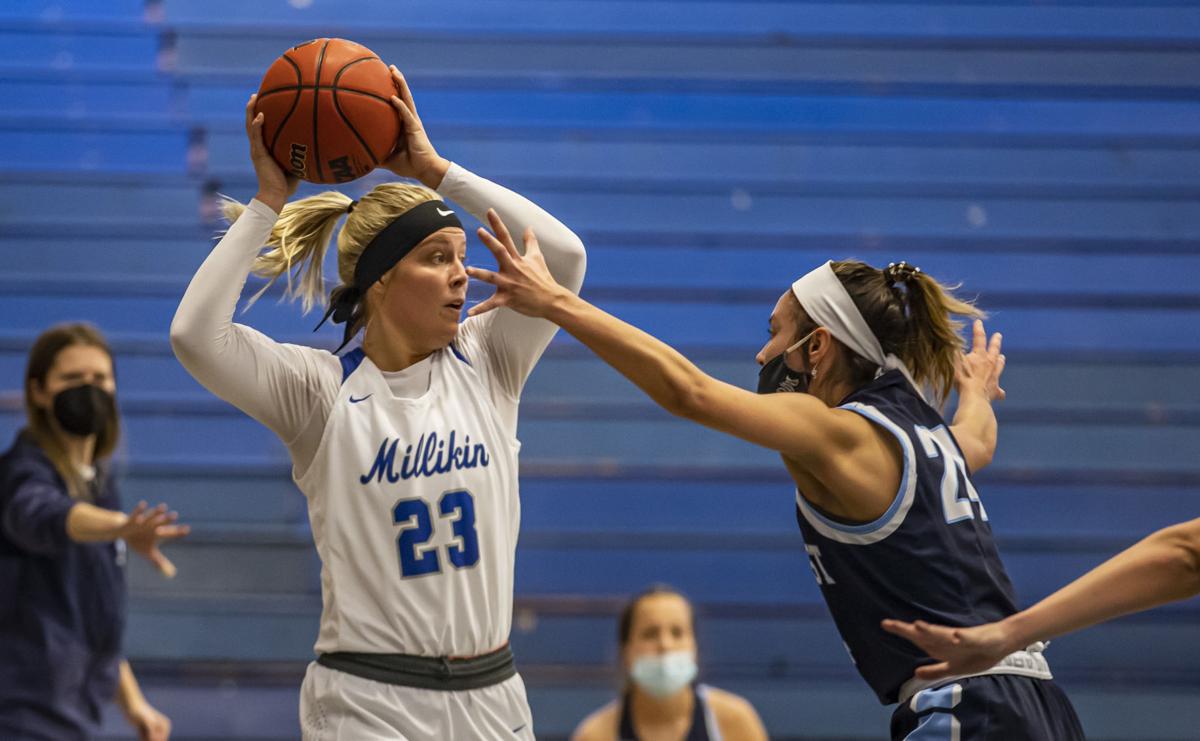 Millikin University's Jordan Hildebrand (23) looks to pass in the first quarter during the game against Elmhurst University. Visit www.herald-review.com to see more photos and videos from the game. 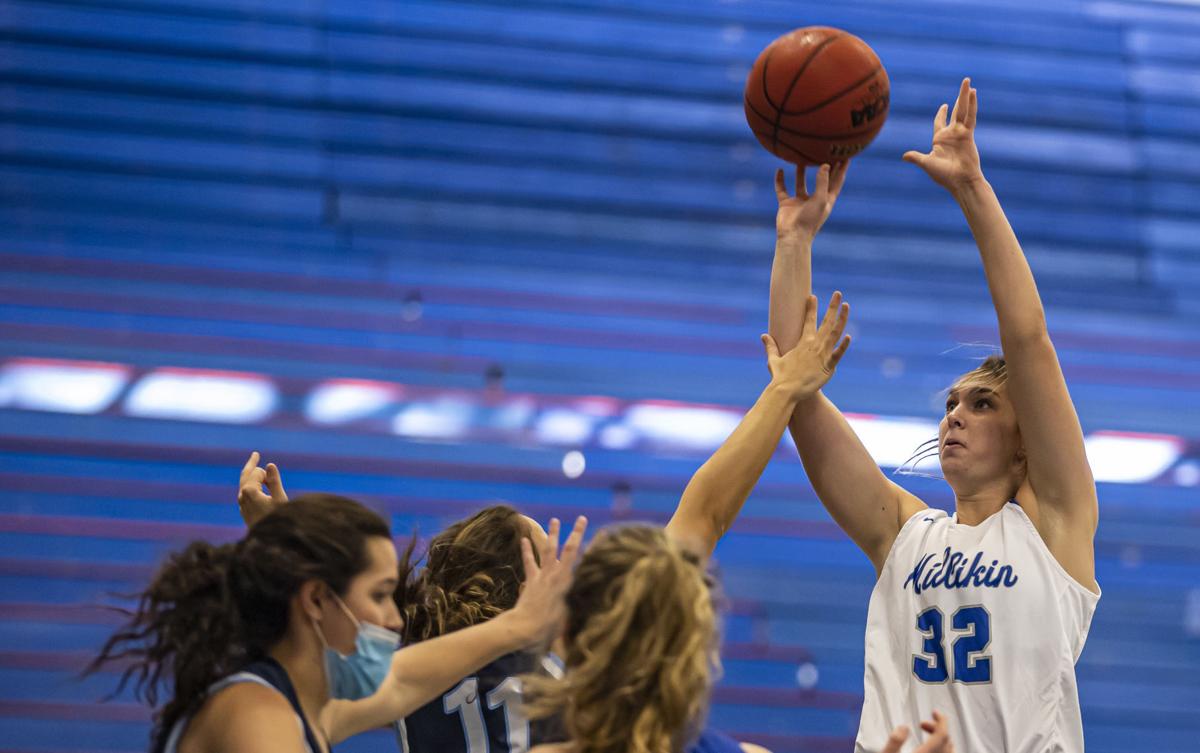 Millikin University's Bailey Coffman (32) shoots in first quarter during the game against Elmhurst University. Visit www.herald-review.com to see more photos and videos from the game. 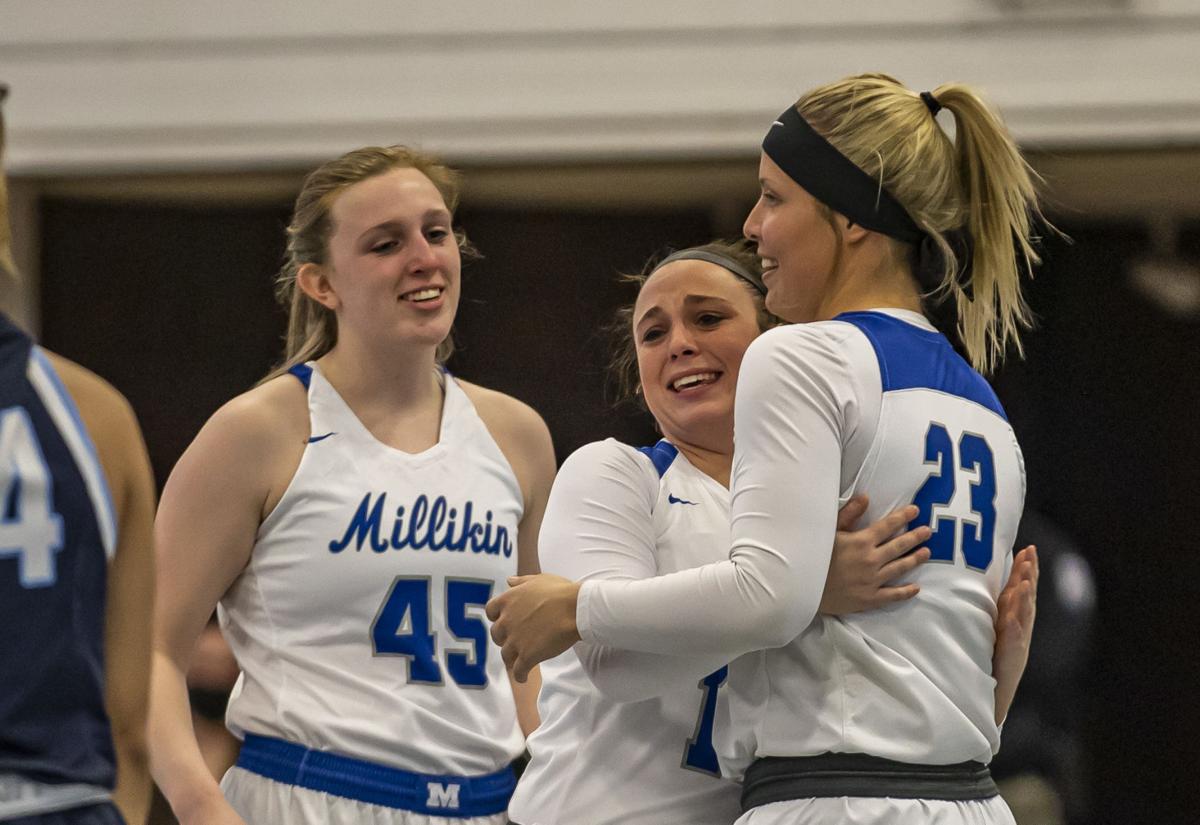 Millikin University seniors Aubrey Magro (10) and Jordan Hildebrand (23) hug after Magro controlled the tip to start the game against Elmhurst University on Saturday at Millikin University. Visit www.herald-review.com to see more photos and videos from the game.