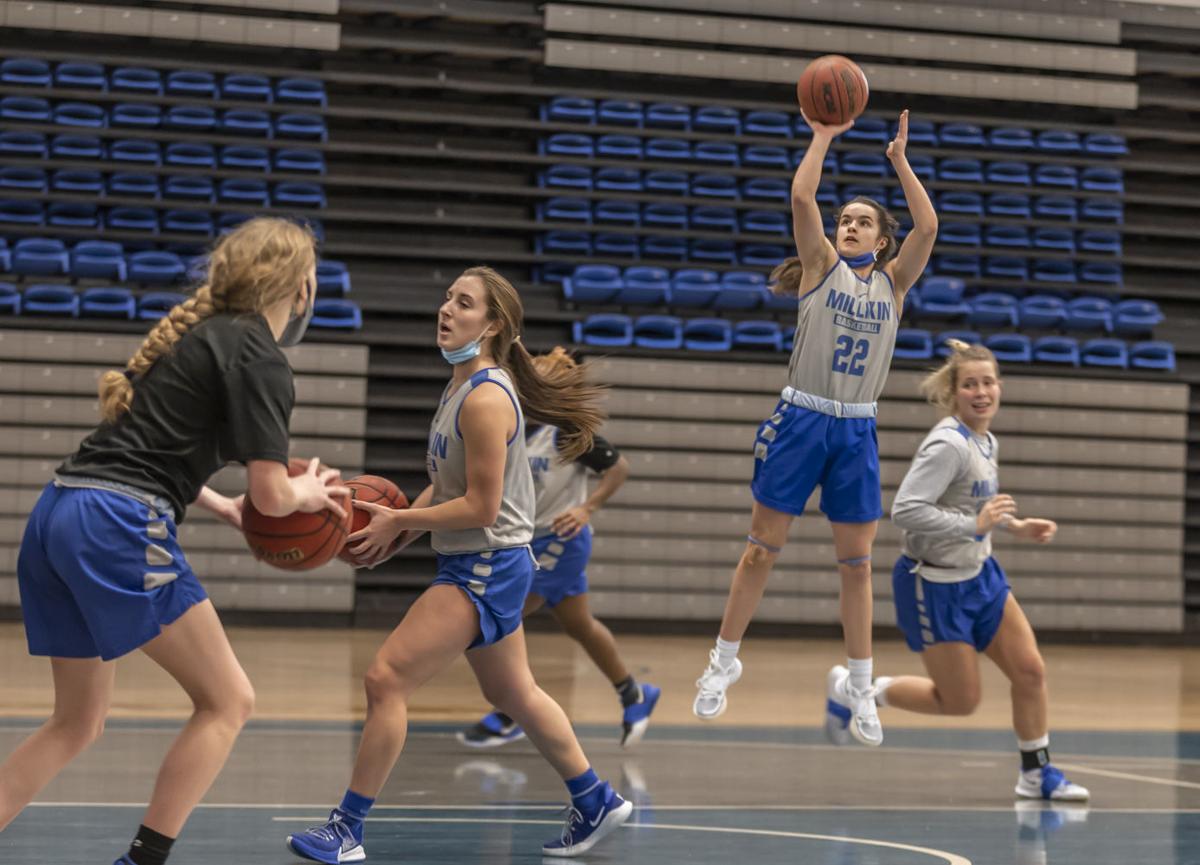 Millikin's Elyce Knudsen (22) shoots during practice in Griswold Center. Knudsen, a freshman, has made a big impression in a short time with the Big Blue. Visit www.herald-review.com to see a video about the start of the season. 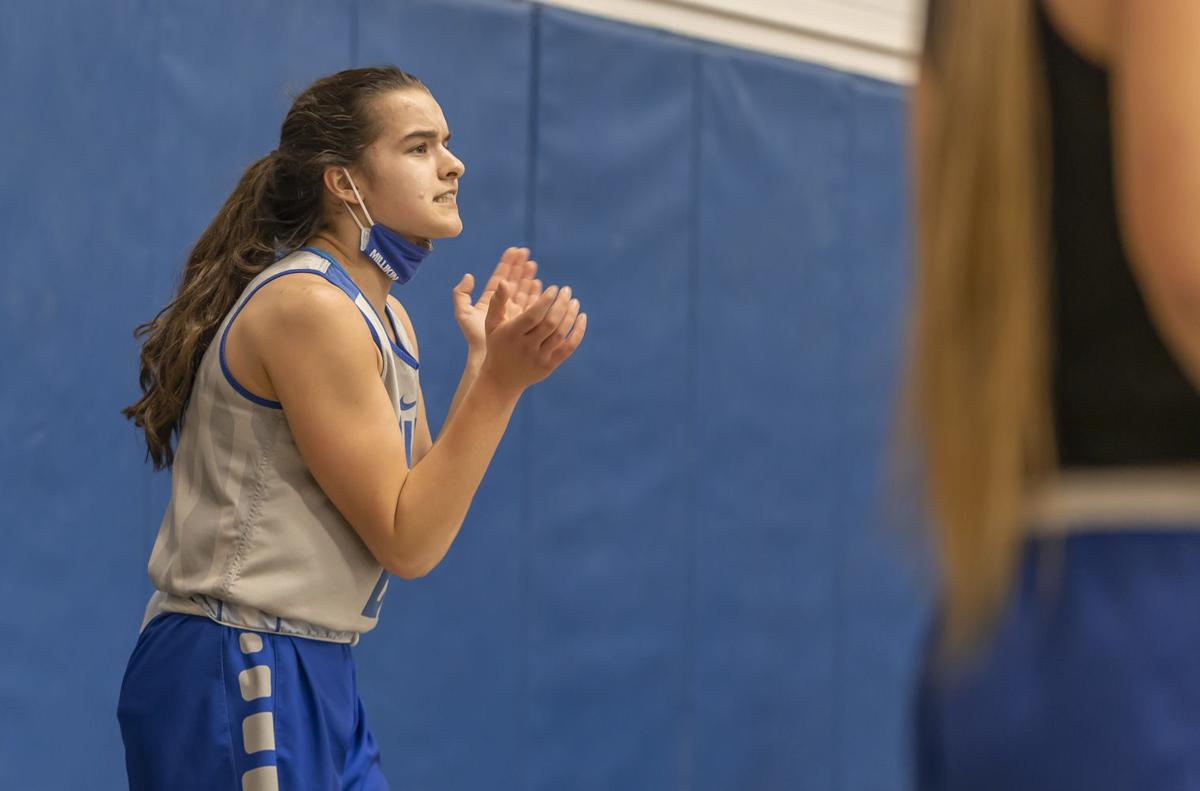 DECATUR — It was like hitting a home run on your fist pitch in your first game.

Millikin freshman Elyce Knudsen fired up and sank a 3-point shot in the first few seconds of her first college basketball game against Carthage on Jan. 23. It was the first points for Millikin this season and an announcement to take notice of the Big Blue's new scoring weapon.

Knudsen finished with 11 points, four rebounds and two assists in that first collegiate game, then nearly tripled that scoring output with 29 points in her next game against Wheaton. On Monday, she was named the CCIW Women's Basketball Player of the Week in just her second week playing.

"(Making that first shot) was exciting and obviously I was nervous, too. I feel like I've been put in this position for a reason, so it was exciting," Knudsen said. "I love these girls and I love our team chemistry. My success doesn't just come from myself; it comes from my teammates. They are putting in the work that makes me better, too."

For those who followed Knudsen while playing at Tolono Unity, her success comes as no surprise. The Rockets' all-time leading scorer with 1,956 career points, Knudsen averaged 24.9 points per game as a senior and was named to Associated Press Class First Team All-State.

"After the first game, some people mentioned that (Elyce) really had the ball in her hands a lot and I said one of these days she's going to go off," Millikin head coach Olivia Lett said. "She is going to open some eyes and then people are really going to be impressed. Just watching her handle the basketball, people immediately realize that she's a little bit different in that way. Then they were able to see her scoring ability up at Wheaton and the ease at which she can get shots."

In pre-season practices, Lett has been focused on changing Knudsen's style from being a selfless player on the court to a player whose own production opens up windows for teammates.

"Early on, we had to convince her that she needed to take more shots. She wanted to be a passer and she didn't want to be a ball hog," Lett said. "We needed to explain that people can't get the same shots that she can. It will open up shots for her teammates and I think that she is really bought into that.

"If she goes off, now all of a sudden 3s are open for other people, the lane is open for (Millikin center Jordan Hildebrand) and then (Elyce) can be a distributor. She has to be score-first for opportunities to open up for other people."

Knudsen reveled in making a statement against Wheaton that let the CCIW know more about her abilities.

"It was an amazing feeling. We lost (90-83), but it was nice to get that under my belt," she said. "I've been waiting for a game to get my name out to the conference because a lot of other teams don't really know who I am yet."

The Big Blue are 2-1, but that loss to Wheaton felt like a win that slipped through Millikin's fingers. Thunder senior Hannah Williams went bucket-for-bucket with Knudsen in the second half and finished with 31 points.

"We felt like we kind of gave it away. They came out and shot really well in the second half," Lett said. "Hannah Williams is a really good player and that was a fun battle to watch. I wish there would have been fans there because I think that would have been a game kids would have remembered forever."

Millikin came back to beat Wheaton last Saturday and took advantage of the unusual scheduling of back-to-back games against the same opponent.

Millikin's two upcoming games against Augustana, scheduled for Thursday and Saturday were postponed because of COVID-19 protocol issues with the Vikings. The Big Blue picked up a game against Illinois Wesleyan on Thursday at 7 p.m. in Bloomington and Carthage on the road at 2 p.m. on Saturday, a game which was originally postponed due to poor weather conditions in January. The uncertainty of an already shorter schedule has focused the team.

Said Knudsen: "We just had our games canceled so it's frustrating. It's all a bit uncertain. We aren't taking any games for granted and we are going out there and playing hard-nosed basketball."

Division III sports will not have winter sports championships.

The Millikin men's basketball team started off strong but couldn't hold off Wheaton College on Saturday, 67-58, on the road.

DECATUR -- The Millikin men's basketball team lost to Wheaton College in CCIW action 82-61 on Thursday at the Griswold Center.

WHEATON -- The Millikin women's basketball team lost to Wheaton, 90-83, on Thursday at the King Arena in Wheaton.

After postponements, Millikin men's and women's basketball return to the court against Wheaton College

DECATUR — Following a tough road loss to open the season against Carthage, the Millikin men’s basketball team returns to the court to face Whe…

BLOOMINGTON -- In a game that popped onto the schedule at 2 p.m. Thursday afternoon, the Millikin women's basketball team defeated Illinois We…

Augustana jumped out to a 17-4 lead in the first quarter and the Millikin men's basketball team could never recover, losing 98-82 on Friday at the Carver Center in Rock Island.

Millikin women's basketball rolls over Carthage on the road

CHAMPAIGN — After a historic week on the court for Illinois' point guard Ayo Dosunmu, the awards rolled in on Monday. The junior was named the…

DECATUR — The Millikin women’s basketball team has made its way into the D3hoops.com Top 25 national poll, earning the 13th spot in this week’…

No. 13 Millikin women fall in overtime to Illinois Wesleyan

DECATUR -- The 13th-ranked Millikin women's basketball team lost to Illinois Wesleyan in overtime, 81-72, on Tuesday at the Griswold Center wh…

The 13th-ranked Millikin women’s basketball team looks to bounce back from a disappointing overtime loss to Illinois Wesleyan on Tuesday when they take on North Central College twice this week starting with Thursday night at the Griswold Center.

Briefly, it looked like Millikin wrestling would be robbed of a postseason again.

Watch now: The Tag and its fantasy impact on Allen Robinson

Watch now: The Tag and its fantasy impact on Allen Robinson

Watch now: Why 750 billiards players are in Decatur this weekend

Watch now: Why 750 billiards players are in Decatur this weekend

Watch now: One Bears player who could emerge at camp

Watch now: One Bears player who could emerge at camp

Millikin's Elyce Knudsen (22) shoots during practice in Griswold Center. Knudsen, a freshman, has made a big impression in a short time with the Big Blue. Visit www.herald-review.com to see a video about the start of the season. 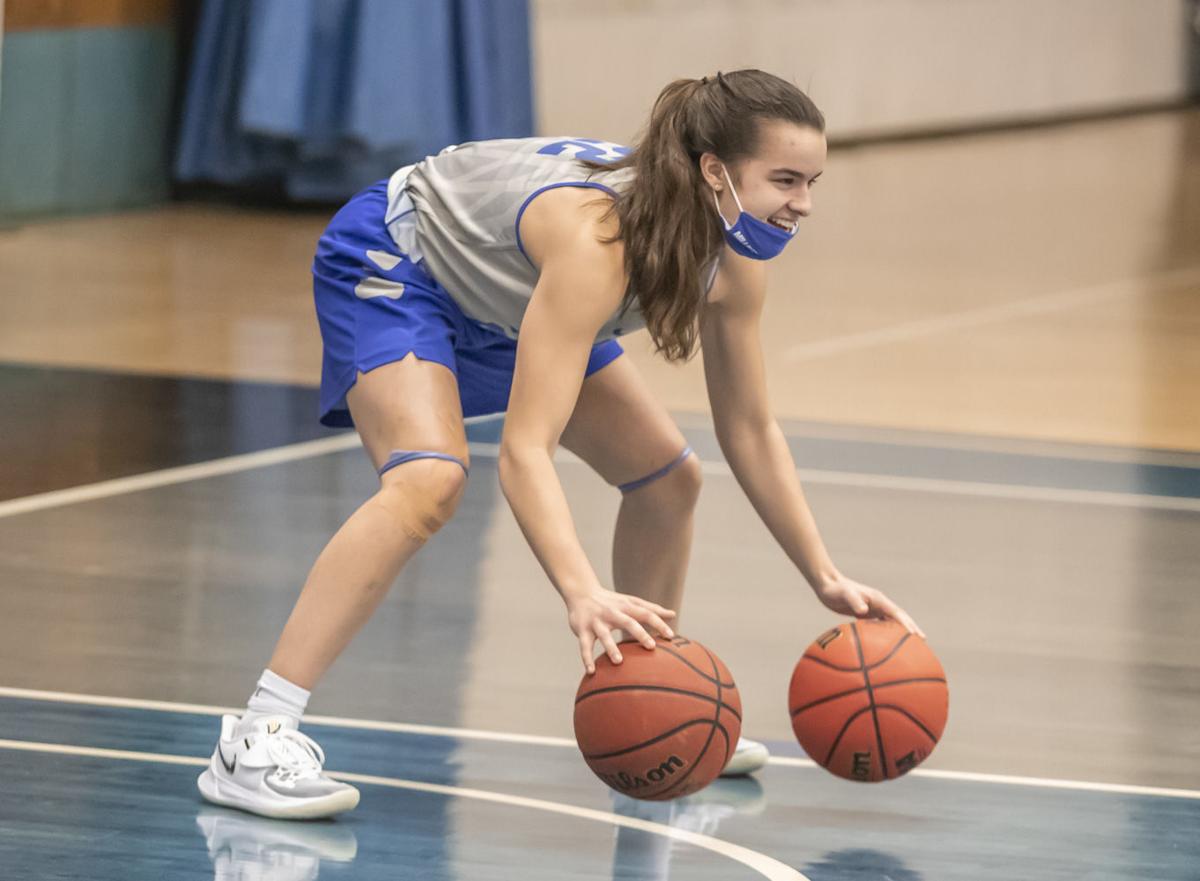 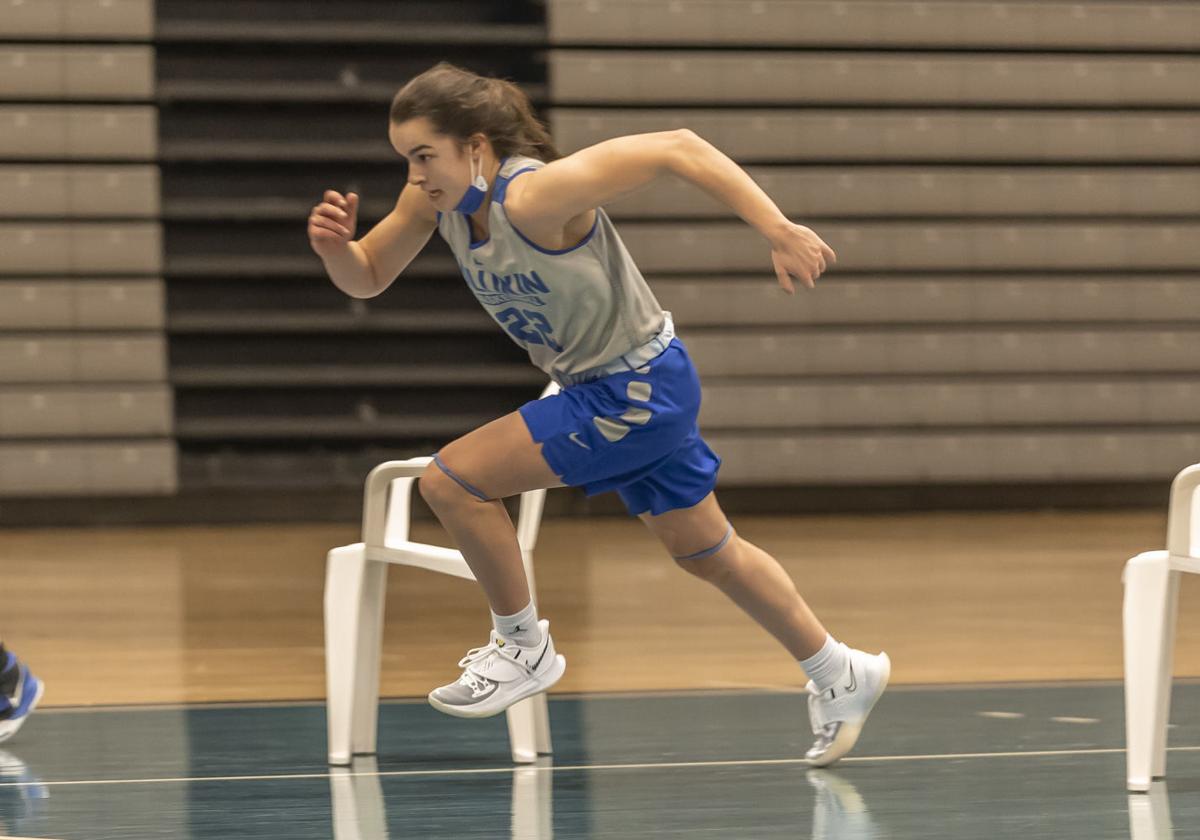 Millikin University's Elyce Knudsen (22) sprints during practice in Griswold Center. Visit www.herald-review.com to see a video about the start of the season. 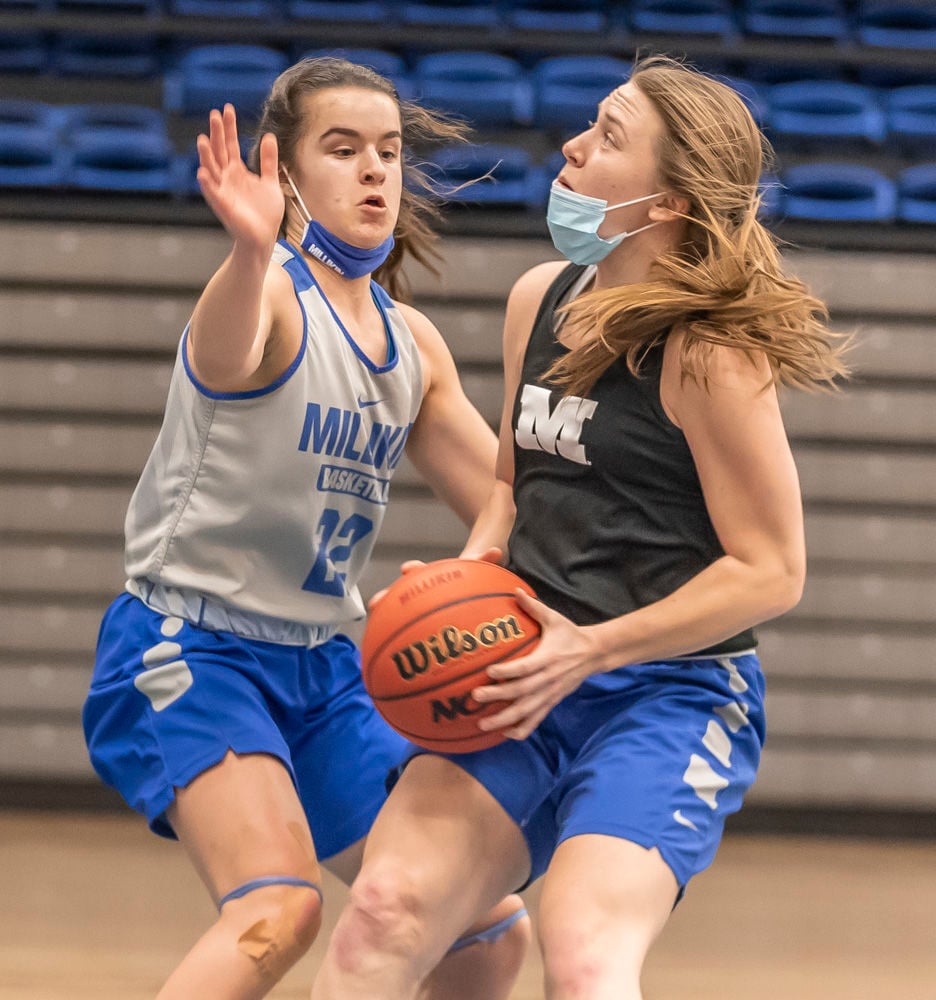